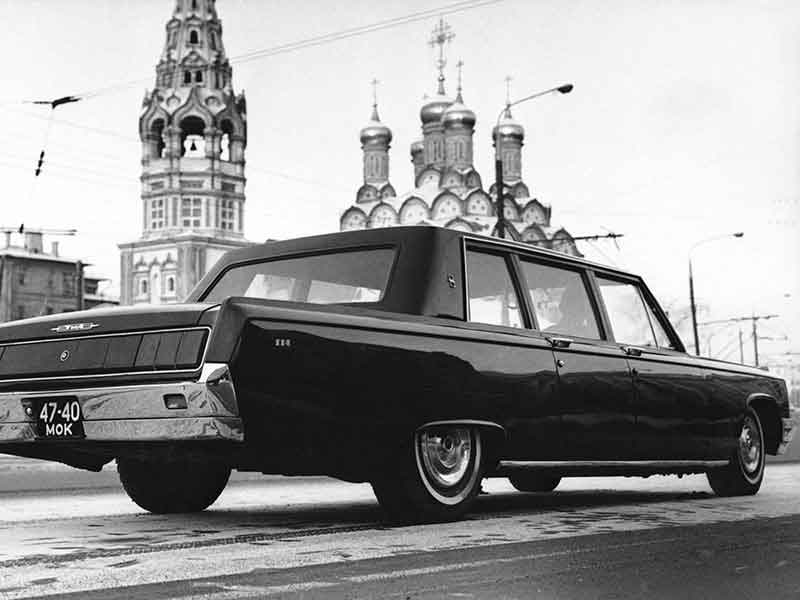 For the first time in a decade, Vladimir Putin is speaking before the United Nations General assembly, which means Russia’s manliest citizen is in New York. Bears and tigers of the Bronx Zoo, take cover: This man has a shirt, and he’s prepared to doff it and straddle you.

When Putin isn’t addressing the UN or elevating machismo to new heights, he’s likely riding in a large black car. Now, that means an armored Mercedes S-Class limousine. But back before the collapse of the U.S.S.R.—western goods were forbidden, Levis were gold—high-ranking members of the politbureau traveled special politbureau-only lanes in ZiL limousines, big executive town cars built in Moscow.

For all the anti-Capitalist propaganda circulating in 1967 (matched in vigor only by America’s contemporary anti-Communist propaganda), the Zil-114 pictured sure does have an indulgent, Yankee look, no? The nose is Chrysler Imperial, the flanks Lincoln Continental and the engine, a 7-liter pushrod V8, pumps out 300 horsepower. Sounds like a classic American recipe. Just, you know, stamped with iron from Magnitogorsk and not Pittsburgh.

Today, Putin’s bloviating is just that; there’s one superpower, and its leader rides in a Cadillac. During the Sixties, that wasn’t the case. And, in the shadow of an Orthodox church, black paint shining and wheels tracking a skiff of December snow, this Zil is menacing, pastiche or not.

A raised Stoli to the Zil, a symbol of international power dynamics’ past.