Long before the Bundy brothers standoff, there was a thousands-strong sex cult led by a fleet of Rolls-Royce motorcars. 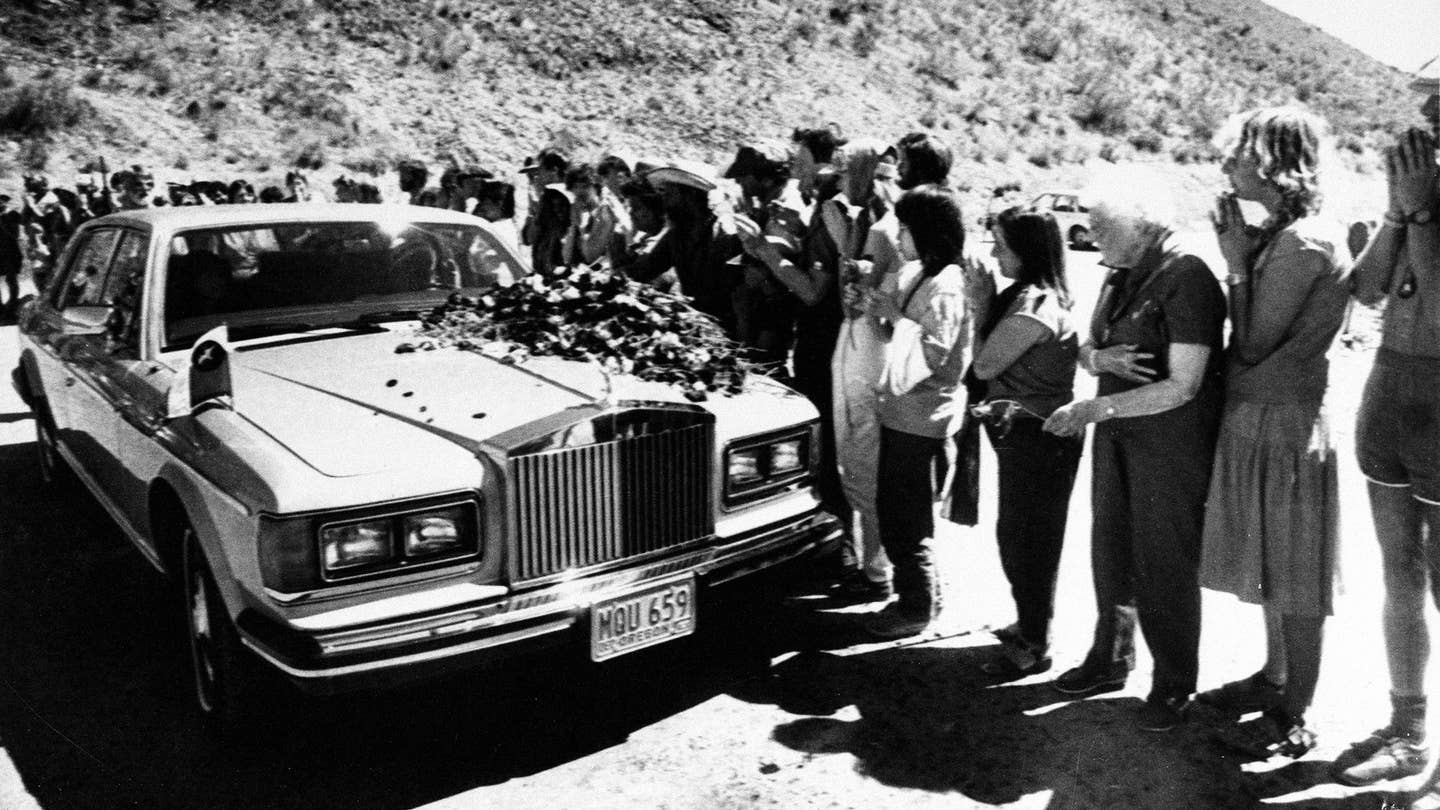 An armed militia has taken over a wildlife reserve near Burns, Oregon, protesting the federal government's treatment of a pair of local ranchers. There are echoes of a similar 2014 standoff in Nevada, but for many Central Oregonians, the news of a gun-toting private army wakes much older and weirder memories. Thirty years ago, a dozen transporter trucks struggled through bitter winter towards Dallas, groaning under the weight of spoils from a ruined utopia. Free love, turned sour by raging paranoia. Bioterrorism. Assassination plots. Dreamy new-age spiritualism and obscene materialism, married in the desert, their wedding car the finest money could buy.

There are nearly a hundred Rolls-Royces here, plucked from the debt-riddled shell of a bizarre sex cult and destined for the oil-fattened wallets of Texas. The cost of the exodus boggles the mind; the cars still capture our imagination. A hundred miles out from Dallas, a television chopper appears, first of leering flock. Of the $6 million dollars’ worth of Silver Spirits and Corniches, more than a dozen have been heavily customized, their flanks painted with flocks of flying cranes, lightning bolts, rainbow colours.

One Silver Spur, nicknamed the “Sun and Storm,” is shaded light at the front, fading ominously to dark thunderheads on the rear fenders. The artwork is laid out so as to suggest that the sun's rays emanate from driver's seat, as if God himself were seated behind the wheel. In a way, for several thousand followers dressed in the colors of the setting sun, such was the case.

Guru Bhagwan Shree Rajneesh was born Chandra Mohain Jain in 1931 in central India, the child of ascetic Jainite parents. Self-denial would not form any part of his personal philosophy. He acquired the nickname Rajneesh—a rough translation would be “King God”—at a young age for his aristocratic desires, and soon set about crafting his public persona. In India, notoriety came from his outspoken criticism of Mahatma Ghandi, and declaring abstinence a sexual perversion.

Rajneesh professed to have achieved enlightenment in 1953. He settled in Bombay, where his speeches and lectures soon thronged with well-to-do Westerners seeking meaning. A focus on promiscuity and free love soon earned him the media appellation of “the sex Guru.”

But all was not well at his new Poona ashram, a more extreme version of the Esalen Institute in Big Sur California. Before long, Bhagwan found himself under great pressure from the Indian government, not least for an enormous unpaid tax bill. Discarding a wealthy, besotted female acolyte who'd bought him the first of his Rolls-Royces, he travelled to New Jersey, entering the U.S. on a visa as a religious leader.

His new lieutenant, Ma Anand Sheela, was given the task of finding a new site for an international commune, the birthplace of a new utopian society. A 64,000-acre ranch in Central Oregon was purchased in 1981, and the faithful set about building a city in the desert, a pearl formed around the heart of the Bhagwan's teachings.

The work was staggering. Followers, known as sannyasins, dammed a river running through the valley at several points. They labored around the clock for weeks, building a new metropolis from scratch. The town swelled to a population of 5,000, complete with hospital, police force, airport, restaurants, a shopping mall and public bus system. The Bhagwan's devotees, dressed in red or orange clothing, gave freely of both their time and wealth, forsaking all earthly possessions in favor of a simple, vegetarian life and sharing everything.

Guru Rajneesh did not ride the bus. Having taken a vow of silence before moving to America, his sole contact with the faithful became daily appearances behind the wheel of his Rolls-Royce. Accompanied by a security detail—one that grew more heavily armed as tensions between Rajneeshpuram and Oregonians grew—he would drive through town, his followers lined up to fling flowers and garlands on the hood of the car. Soon, he expressed a desire to have a Rolls-Royce for every day, the funds to come from wealthy followers.

Difficulties arose early for Rajneeshpuram, which was built on farmland not zoned for this density of settlement. The inner circle sannyasins, claiming to be persecuted by the local government, sought ways to subvert the process. Nearby was the tiny, dying town of Antelope, with a population of less than 50. Rajneesh's followers bought up enough property to control the vote, defeated a last-ditch effort by the town to disincorporate, and set about intimidating the citizenry until many moved away.

Meanwhile, the Bhagwan's fleet of Rolls-Royces grew ever larger. Peter Haykus, known as Swani Deva Peter within the Rajneeshpuram commune, customized multiple cars into some of the wildest Rollers to ever rival John Lennon's Romany wagon Phantom V. Along with the Sun and Storm Silver Spur, Haykus created a car with a snakeskin-like cracked finish. One was festooned with a peacock, one with lace curtains affixed to the hood, and another shaded like a rainbow from left to right side.

Hostility towards sannyasins was growing. Soon, the locals had t-shirts with the Bhagwan in crosshairs, and “Better Dead Than Red” bumper stickers. Rajneeshpuram's elite responded by creating a “Peace Force” armed with Uzis, and the Bhagwan's daily drive-by Rolls-Royce blessings were soon accompanied by gun-toting security teams in vans and Crown Victorias.

Depending on whom you believe, enemies were both inside and outside the commune. Either Ma Anand Sheela was the Bhagwan's Lady Macbeth, or a convenient scapegoat when the law came calling. She was outspoken and caustic, strongly condemning what she saw as a bigoted community's efforts to stand in the way of something they didn't understand. When asked by an Australian reporter what she would say to those who didn't want to live next to the sannyasins, she responded, “What can I say? Tough titties.”

Ma Sheela would later claim that Bhagwan Rajneesh was no blissed-out peaceful mystic; he would claim to be an unwitting dupe, and captive to Sheela's brand of paranoid madness. Either way, what happened next is hardly believable. After a failed plan to bus in homeless as a means for controlling more votes, Sheela and her co-conspirators arranged use biological agents to gain access to seats on the county council in 1984. Purchased, then cultivated in an on-site laboratory, a strain of Salmonella bacilli was used to sicken two visiting County commissioners, then deployed at four restaurants in nearby The Dalles. Nearly 800 people fell ill, and 45 were hospitalized. It is still considered the largest bioterrorist attack on U.S. soil.

For Rajneeshpuram, it was the end. Ma Anand Sheela fled the compound for West Germany, and Bhagwan Rajneesh called his first public press conferences to denounce her. It later emerged that she'd also had the Guru's personal physician poisoned, and made arrangements for an assassination attempt on local politician James Comini as he lay recovering from surgery in a Portland hospital. She would be extradited and incarcerated in federal prison. Today, she lives in Switzerland where she runs a pair of nursing homes.

The Guru also fled shortly afterwards, heading East. The arresting agents suggested he was attempting to leave the country, while Rajneesh claimed that he’d left the compound to avoid bloodshed; law enforcement was undoubtedly prepared to enter the compound in full force, as the Branch Davidian shootout in Waco, Texas would prove a decade later. Perhaps the Bhagwan was right.

He was deported from the U.S. in and forced out of some 21 countries before finally settling once again in India. Taking the name Osho, he lived there until January of 1990. Today, he’s considered either one of the greatest religious leaders ever born, or one of history's biggest charlatans. Like most of the Rajneeshpuram tale, it all depends on who you ask.

As for the Rolls-Royces, they travelled Southwards to Dallas in the ownership of auto dealer Bob Roethlistberger. With Rolls-Royce selling just over a thousand cars per year in the U.S., this glut of vehicles had the market buzzing. A year later, Roethlistberger died of cancer, and many of the cars were repainted and sold. But originals still turn up; at a 2005 auction held by Christie's at the Monterey Jet Centre, a rainbow-coloured 1982 Silver Spur crossed the block. Nigel Matthews, a judge at the Pebble Beach concours d'Elegance and Hagerty classic car insurance's global director of client services was there. “As sacrilegious as adding some soda water to a glass of 1926 Chateau Lafite,” he says.

Water into wine: either a miracle or sacrilegious dilution. Somehow, that's a perfect epitaph for the guru who once defined “Holy Roller.”