Nissan Solves A Pressing Problem: Car Making Without The Presses

Using bots with hammers instead of dies is clever. It also is butt-slow. 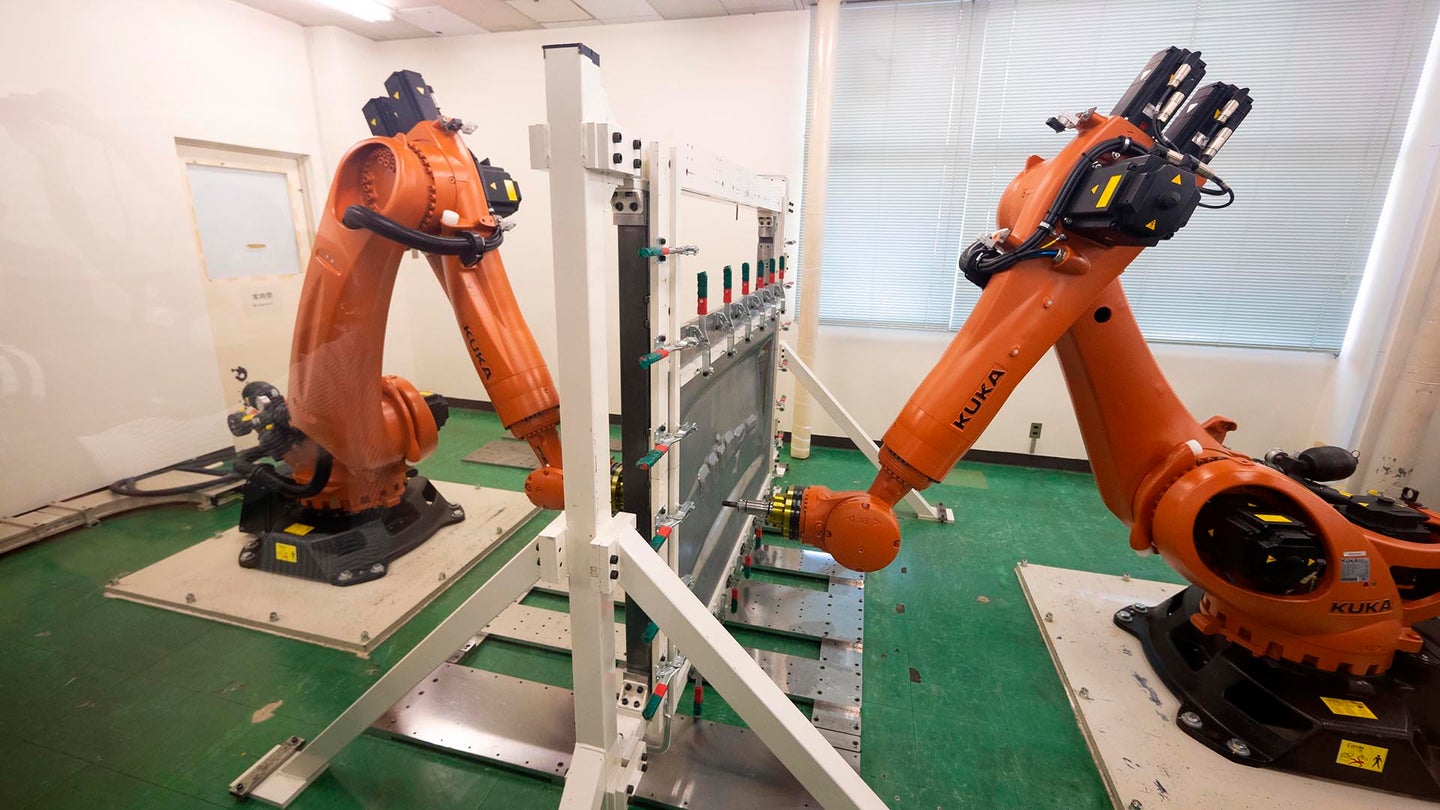 The road to becoming a successful carmaker frequently comes to a sudden end when tooling, and especially the price thereof is discussed. A car is made from thousands of parts, and nearly all of them demand at least one tool, mold, die, or whatever you prefer to call it. A prosaic car door often requires five or more of these tools, each one of them can cost a million dollars U.S., and woe is you if you change your mind, design, or engineering after the tools have been made. Many, many cars must be sold to claw back the cost of the tooling, and occasionally, the tools win.

This morning, Nissan called us out to their Oppama plant south of Tokyo to show us how expensive tools can be retired. Down a long and very beige hall, we were greeted by two stout Kuka robots with hammers in their hands. Between the two robots was a sheet of metal, and the bots got busy hammering at it from both sides according to commands sent from a Kula-komputer the size of an under-table refrigerator.

The bots formed the metal without dies, and with that, the future of car making has circled back to its beginning. Before the sheet metal of our cars was bent into shape by giant presses using tools and dies weighing 40 tons and more, the job was done by highly-skilled workers using an English wheel, and in the thousands of years before that, metal was shaped by hammering. Of course, the work of the Kuka robots is much more reproducible than the work of an artisan banging out a knight’s helmet, and also, the hammers of the Kuka bots are diamond-coated, which makes for a very smooth final product.

Don’t expect the monster presses and expensive dies to die just yet, however. A press can form a body panel in mere seconds. How fast are the bots? Fast is the wrong word. The bots started to work on a rear panel of a Nissan Skyline as we entered the room, and when we left an hour later, they hadn’t made much progress. One full panel would take the bots 19 hours, we were told. The press could make 10,000 parts and more in that time.

So what would the hammering bots be used for? Nissan’s Production Engineering chiefs Haruhiko Yoshimura and Takashi Tomiyama identified as options very small series of specialized vehicles, and possibly the making of replacement parts for historic vehicles, but at the same time, they repeated the engineer’s mantra that theirs is only the development of technologies, the business decisions would be made elsewhere.

In any case, the idea of resurrecting the hammering of eons past is not quite brand-new. Four years ago, when Toyota showed us new production methods, they also trotted out bots with hammers and sans dies. Nissan spokesman Nick Maxfield was still at Toyota in 2015, and today he protected the honor of his new employer by pointing out that Nissan uses robots front and back, whereas the hammering Toyota bot was one-sided only. Progress marches on.

The die-free bots are a step in the right direction, but it’s still a long way from solving one of car making’s core conundrums. If you really want to disrupt the automotive business, invent a way of making body panels at high speed, but without the huge up-front cost. THAT would rightfully stand the auto business up on its head.