The Ins And Outs Of Everything-By-Wire

By-wire controls have increasingly taken over the modern automobile, and it's driving cost and complexity along with convenience and performance. 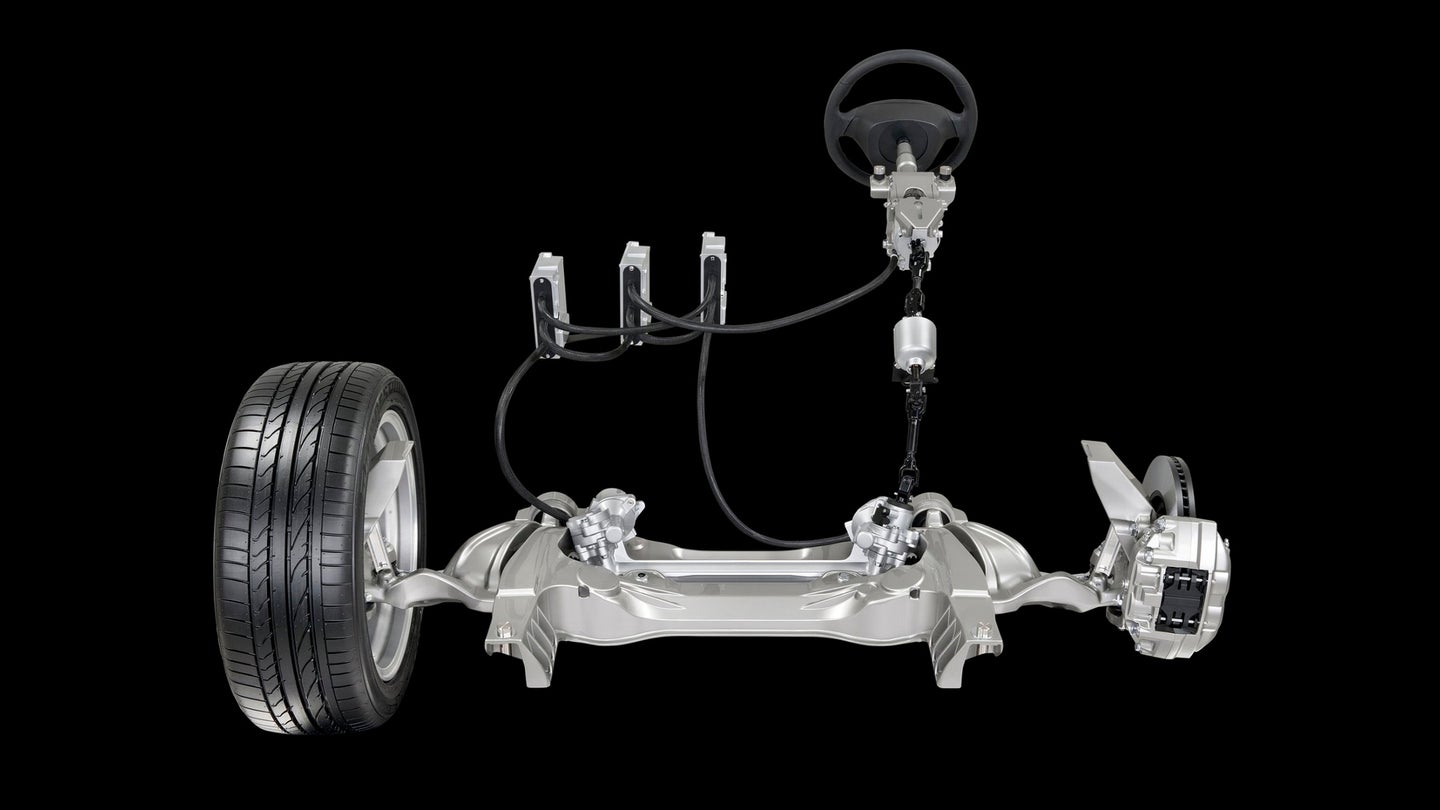 While debate rages about the real-world future of automotive electrification—and yes, it’s still raging, with respects to its timeline, its limits, and the true consumer appetite for EVs—many seem to be forgetting a key detail: We’re already most of the way there.

True, actual propulsion via electric motor still has an extremely long way to go. Currently, less than one percent of cars on the road in the U.S. are electric. But within all cars, electrical activation of formerly mechanical components has been a raging trend since vacuum-pump-powered windshield wipers, and even hand-operated versions, yielded to tiny electric motors a century ago. The trend eventually manifested itself in now-familiar power windows—though the term “roll down your window” persists—power-assisted steering, power convertible roofs, power sunroofs, and for a time electrically extended radio antennae, designed to thwart that 70’s-era pastime of antenna-bending that various hooligans and low-lifes seemed to enjoy.

Today, power-everything is very much a thing, to the extent that cars now have dozens of electric motors. According to Acura, for instance, the company’s most complex vehicle, the RLX Sport Hybrid flagship sedan, not only has three electric drive motors—two at the rear wheels and one integrated into the engine—but there are more than 50 additional electric motors doing everything from opening vents to adjusting seats to providing steering wheel and pedal feedback. I once asked a carful of German engineers riding with me in a Mercedes S-Class how many electric motors lurked around us. They counted them off together and reached about 120 before their memories ran dry. Of course, that car has electric sunshades, power rear footrests, and four-way power-adjustable rear headrests, so there’s that.

The initial benefit of by-wire operation of vehicle systems is fairly obvious—ease of use. After all, cranking those windows down over and over again or wrestling roofs into place took a lot out of us, and is fairly undignified. (It should come as no surprise that electrification usually starts in the premium-luxury segment, and not entirely because the systems roll out quite expensively.) But in modern cars, electrification brings advantages beyond just limiting repetitive-stress injuries and coddling back-seat drivers. It improves driving precision and performance, enhances safety, simplifies wiring, and enables the adding and bundling of new capabilities of which early car owners could have only dreamt.

In fact, the process is only accelerating as new technologies allow more and more mechanicals to become “by-wire” systems. Some are seemingly small enhancements, though still complicated at heart. For instance, the electrical activation of door releases has been a slow adoption due to the safety implications. (Namely, getting out of a vehicle in the event of a power loss.) As a result, those systems that do have button-press door releases or those activated via a slight nudge of the handle—including the new Audi Q8 SUV—also have mechanical backups. With the Q8 system, if you pull the handle past a certain point, it engages a conventional mechanical release. Though the assumption in technologies like this is that weight-savings are a key motivator, that isn’t true when mechanical redundancies persist. So the advantage here is the inclusion of additional secondary systems. “It enables certain luxury features like soft-close doors, but also emergency opening should you lose your key or leave it behind, via an app or a connected service,” says Audi communications lead Mark Dahncke. “All those features that might be activated or enabled through a key fob will also require electrical control.” Hence the electric trunk releases that are becoming de rigeur in higher-end vehicles.

But by-wire control is quickly leaching into actual drive systems, as well. Though throttle-by-wire has been available for several decades—gas pedals have long since detached from any direct link to the fuel injection system—Infiniti was the first to introduce steer-by-wire, which it did in its 2014 Q50. The feature, which Infiniti calls Direct Adaptive Steering, allows for more immediate response as well as tuning of the steering feel—tighter for sportier driving, more relaxed for normal use. It’s now also available in the Q60 coupe and the QX50 crossover, which was the first time it was deployed with a front-wheel-drive architecture, according to Infiniti representative Kyle Bazemore.

The technology also primes the company for future innovations, including semi-autonomous control. It also can lead to eventual weight savings. “If regulations change, there is the potential to eliminate the redundant mechanical steering system we are required to keep at this juncture, which would save significant weight,” Bazemore explains. Could the systems become that reliable? They might already be. When I asked an Infiniti engineer during the Q50’s launch how many times the backup steering system had been engaged in test or public use, his answer was unequivocal: Zero. Finally, from a purely business perspective, losing the mechanical redundancies would allow for easier reversal of steering systems and cowl components when manufacturing for left- and right-hand drive markets.

Audi’s own by-wirefication process now includes brake-by-wire, which it debuted in the E-tron electric SUV late last year as the first EV with such technology. This system uses electric motors to activate hydraulically controlled brake calipers based on driver pedal force. According to Audi, this helps with modulating the regenerative braking capabilities, specifically the handoff between regen and conventional braking. It, too, has a mechanical redundancy built-in, one that simply pops open a hydraulic valve if the computer-controlled system fails, bypassing the system and sending immediate pressure to the brakes. It, too, has yet to fail in test or road use.

Digging even deeper into the electrification of automotive systems, we start finding major benefits in the refinement of wiring systems to include broader electrification. Honda has used what it calls Multiplex wiring since the 1998 Accord to minimize the amount of wiring necessary to control door locks and power windows and enable key fob controls, via what began as a relatively simple computer control unit. It reduced the number of wires traveling to all four doors by allowing each wire to control multiple functions, saving both weight and cost. The current Accord uses the technique much more extensively, with multiple computers controlling the systems throughout the car, from suspension and brake control to cabin features such as rear-view cameras and auto-dimming mirrors. It also enables more holistic safety features, including such things as sensors to prevent the injuries to hands while closing power windows.

That digitalization of vehicle systems now allows for broader electrical control, says Chris Martin, a technology communications manager at Honda. “If you jump beyond the basic electric motors in our hybrid cars, you start finding lots of new systems enabled by digital control,” he says, noting that Honda recently introduced its own brake-by-wire system in its Insight hybrid. “This will become particularly important as systems rely less and less on engine power to operate.” Indeed, in the engine bay itself, subsystems are progressing steadily from hydraulic or belt-driven to electric. Most notably, air-conditioner compressors are now frequently driven by electric motors, Martin points out, enabling them to keep supplying cool air even when the engine has stopped at stoplights, as happens with fuel-saving start-stop systems. Even those start-stop systems benefit from broader electrification, as they require more capable and precisely controllable electric starters for nearly continuous use.

The need for such capabilities—along with the greater computing power required for advanced driver-assistance technologies—has helped propel the switch to battery-equipped 48-volt electrical systems, such as those appearing in the new Porsche Cayenne and Audi A6 and even the Ram 1500 pickup truck. The new enhancement can add power to the wheels, run new features such as the complex, power-hungry electric active sway bars in the Cayenne, and allow cars to run the increasingly ubiquitous sensors and cameras that come with advanced driver-assistance systems, enabling limited self-driving and obstacle detection features.

All of these transitions are becoming bigger and bigger deals with the move towards fully electrific vehicles. But even items as straightforward as electric trunk releases and now electric parking brakes can greatly simplify vehicle interiors and streamline their activation. Trunk releases alone represent particularly knotty interior space and weight challenges give that they typically require very thick and robust cable systems in order to retain the torque necessary to open the trunk, since cable strength diminishes with length. Moving these to electrical controls takes the workload off the driver, and produces collateral benefits, whether its reduced weight or increased key-fob control.

On system, though, that will likely be the last to be electrified: Hood latches. Even in the grandest luxury cars, owners still have to grab a latch under the dash and give it a hearty enough yank to release the hood. According to Audi’s Dahncke, electrifying that function is low on the priority list, since owners rarely open their hoods anyway. Besides, once engines disappear completely, so will those latches.