The HondaJet Ride-Along Review: Honda Takes the Slow Track to a Fast Plane

Honda’s first airplane makes a case for patience in an age when there is none. 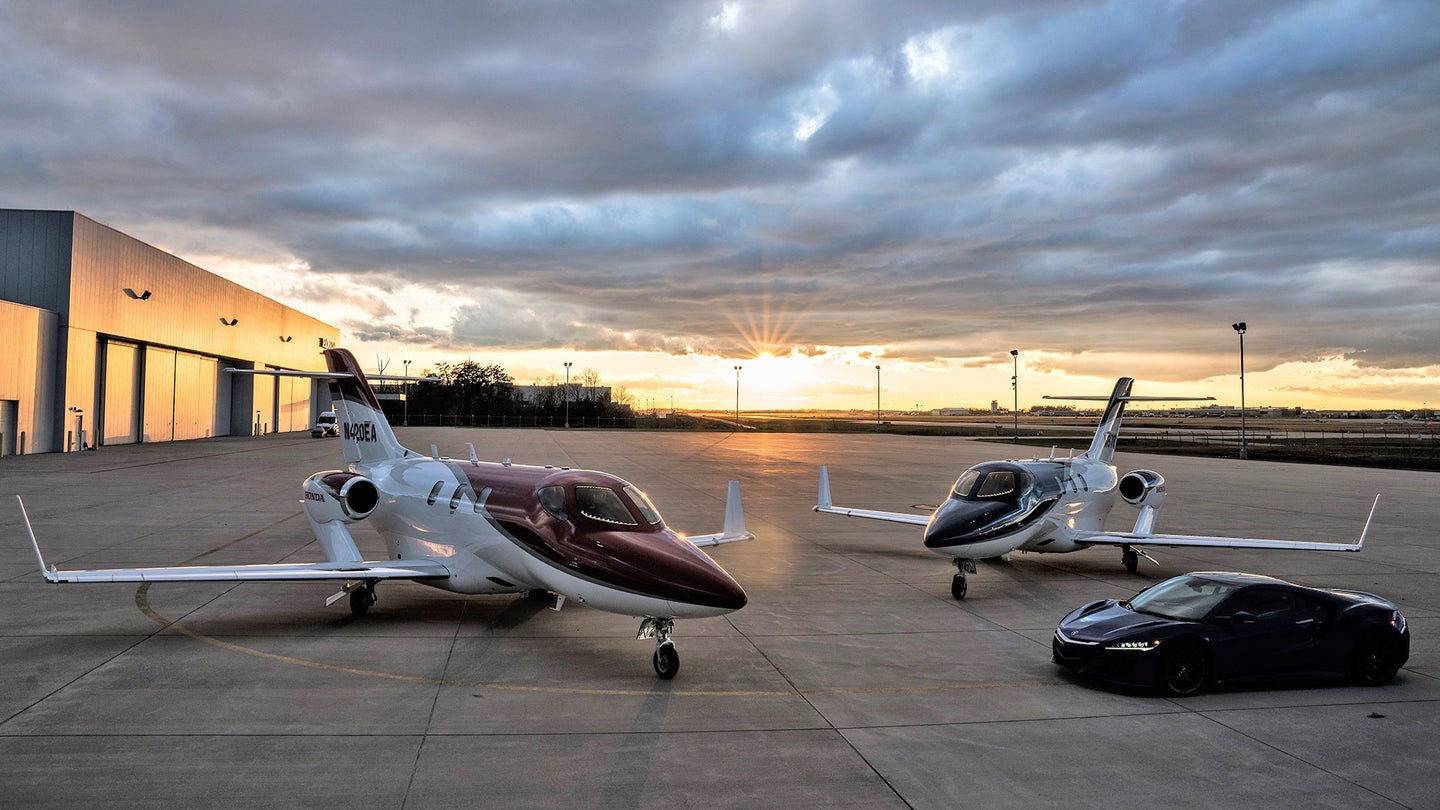 Automobiles and airplanes have much in common—power, speed, aerodynamics, lightweight engineering, the endless pursuit of efficiency. Many companies on either side of the car/plane have crossed over: BMW began life building aircraft engines, a realm Rolls-Royce also occupied early on and has been a leader in since, though as a separate company. Famed aeronautical designer Burt Rutan designed prototype concept aircraft for both Toyota and Lotus, while equally visionary aeronautical genius Paul MacCready created the streamlined GM Impact, the predecessor of the famed EV-1 electric car. Mitsubishi has been building airplanes and cars for a century, and over-the-top-luxurious business-jet manufacturer Bombardier also builds buses, snowmobiles, and, well, other things.

So it shouldn’t be the least bit surprising that Honda now has a business jet. Yet somehow, it is. After all, when carmakers tinker with airplanes, they usually start small. The Toyota effort was a modest piston-powered propeller aircraft that flew in 2002, while Rutan created the little-known Elsie as a two-seat recreational aircraft for Lotus founder Colin Chapman shortly before the like-minded automotive entrepreneur died in 1982, thus ending the effort to launch the aircraft as a production model. You’d think that Honda—a global powerhouse, but always very much a company of the people—would enter aviation with the equivalent of a Civic, something practical, humble, and economical.

But here I am, somewhere over the Carolinas, humming along in the right-hand seat of the HondaJet—a $5 million aircraft that cruises at 423 mph at higher than 40,000 feet. Before me sits a big instrument panel with three primary screens showing colorful animations of our path and current disposition. The ground is a confirmed 43,000 feet below me; behind me, two jet engines casually crank out 2,000 pounds of thrust each.

Make no mistake, this is a true business jet, not an entry-level “starter” plane. It has advanced aerodynamics, structural complexity, multiple system redundancies, significant training requirements for its pilots, stringent maintenance needs, and big-boy jet capabilities. With a full fuel load, we could fly up to 1,400 miles—Charleston to Denver, say—at an hourly operating cost of roughly $1,130, according to the Aircraft Owners and Pilots Association. That industry-standard measure includes variables such as fuel, maintenance, insurance, landing fees, crew costs, and more. While decidedly low for a business jet—most average between $3k and $5k—this ain’t no flying Fit. (One perk: The toilet, an option that usually costs around $35,000 on aircraft in the Light Jet category, comes standard.)

When I posed the question of why Honda would enter the business jet market to global CEO Takahiro Hachigo, he described it as part of founder Soichiro Honda’s original and persistent vision for the company. “We always aim to offer the joy of mobility to our customers,” Hachigo said. “Part of that mission is providing that in the sky as well as on the ground. The private jet business is not a short-term business, and being in it makes viable our long-term goal of delivering that joy of mobility.”

Whether HondaJet’s average owner would describe the experience of flying in the aircraft as a physical manifestation of the “joy of mobility” depends greatly on their overall disposition: hard-boiled corporate go-getter who can’t be bothered to look out the window, or thoughtful aviation enthusiast with an explorer’s mentality? Regardless, there is undeniably a degree of joy in moving easily at a whim through an airspace system that is usually less than a joyful experience for those forced to fly commercial. On that count alone, Mr. Honda would be proud. In the same conversation, however, Hachigo cited one of the company’s key themes as “pursuing challenging products.” Under that lens, the HondaJet makes quite a bit more sense...because, well, the company sure as hell picked a challenging product in the HondaJet.

Indeed, the distinctive aircraft, with its novel over-wing engine placement and slightly drooped nose, has been 20 years in the making, since the day Honda Aircraft Company CEO Michimasa Fujino first broached the idea with the parent company’s leadership. In that time, the aircraft has endured multiple delays that are generally to be expected in an industry known for excruciatingly long runways for new product launches—especially when the company is itself new to aviation. But Honda stayed committed to the project, and production finally began this year after the aircraft received its critical certification from the FAA. It has delivered more than 60 jets so far, which are now flying mostly in the U.S. and Europe, though the company is starting to open up the South American and Asian markets. It also made an appearance at the Dubai Airshow last month, drawing considerable interest from potential Middle Eastern customers drawn to the airplane’s efficiency and low cost.

In the end, the appeal of such a craft always comes back to the airplane itself—and this one is a uniquely remarkable achievement. Honda Aircraft spent two decades honing the aerodynamics of the airplane, working to optimize the laminar airflow over the fuselage and wings—the desirable impact of supremely precise and smooth shaping that encourages the airstream to adhere to the surface of the aircraft, minimizing drag and improving efficiency. Hence the flush rivets on the wing’s leading edge and the uniquely shaped nose, among other design features.

Then there are the engines, mounted on pylons and positioned as far aft as possible. This placement eliminates the intrusion of engine mounts in the cabin, freeing up space, and cuts noise as well, since the engine’s vibrations dissipate through the wings rather than the fuselage. It’s also more aerodynamically efficient, since the placement also helps minimize drag.

But easily the most notable single feature of the HondaJet program is the provenance of those actual engines, not just their placement. Honda designed and fabricates the engines itself, with support from veteran turbofan maker GE. That’s hugely significant, as no other business-jet maker also produces its own engine. This gives them control, as well as a product it can sell to other manufacturers.

“Doing their own engine adds cost and risk, but it also represents an opportunity to innovate with new technology,” notes aviation analyst Richard Aboulafia of the Teal Group. “Nobody else has done that. Of course, there's additional risk with that innovation; after all, Williams International and Pratt & Whitney Canada have a lot more small-engine experience, and much larger support networks. But if Honda thinks their turbine is a better mousetrap, there's an opportunity there.”

It’s taken time, of course—as much time as the airframe itself. This in an era when Honda upscale brand Acura was mercilessly harassed for taking a decade to produce the Acura NSX supercar. But in both cases, patience has been key to getting the product right. The HondaJet has been very well received in the bizjet market, and enthusiasm is high. Mr. Honda would also likely be pretty happy with airplane’s performance, which does handily deliver on the joy of flight as a purely physical experience, in addition to a more efficient one. A departure at full power pushes you back nicely in your seat as you roll down the runway, yet the airplane remains quiet and stable. It’s also light and nimble, and delivers a sensation of movement and flight that’s largely absent from business jets.

“You can actually fly this thing, and have fun doing it,” said HondaJet test pilot Stefan Johansson as we carved through the air on approach to the company’s headquarters and factory in Greensboro, North Carolina.

Our flight from Charleston, South Carolina, took just under an hour, and was effortless. Since we came in and out of small airports, there were no lines, no security, no bag-checking, and no waiting around. It may have taken Honda 20 years to get to this point, but that kind of speed is worth the wait.