Porsche’s InnoDrive Is Cruise Control for the Lazy Enthusiast

An impressive feat of futuristic prowess, in search of a present-day mission. 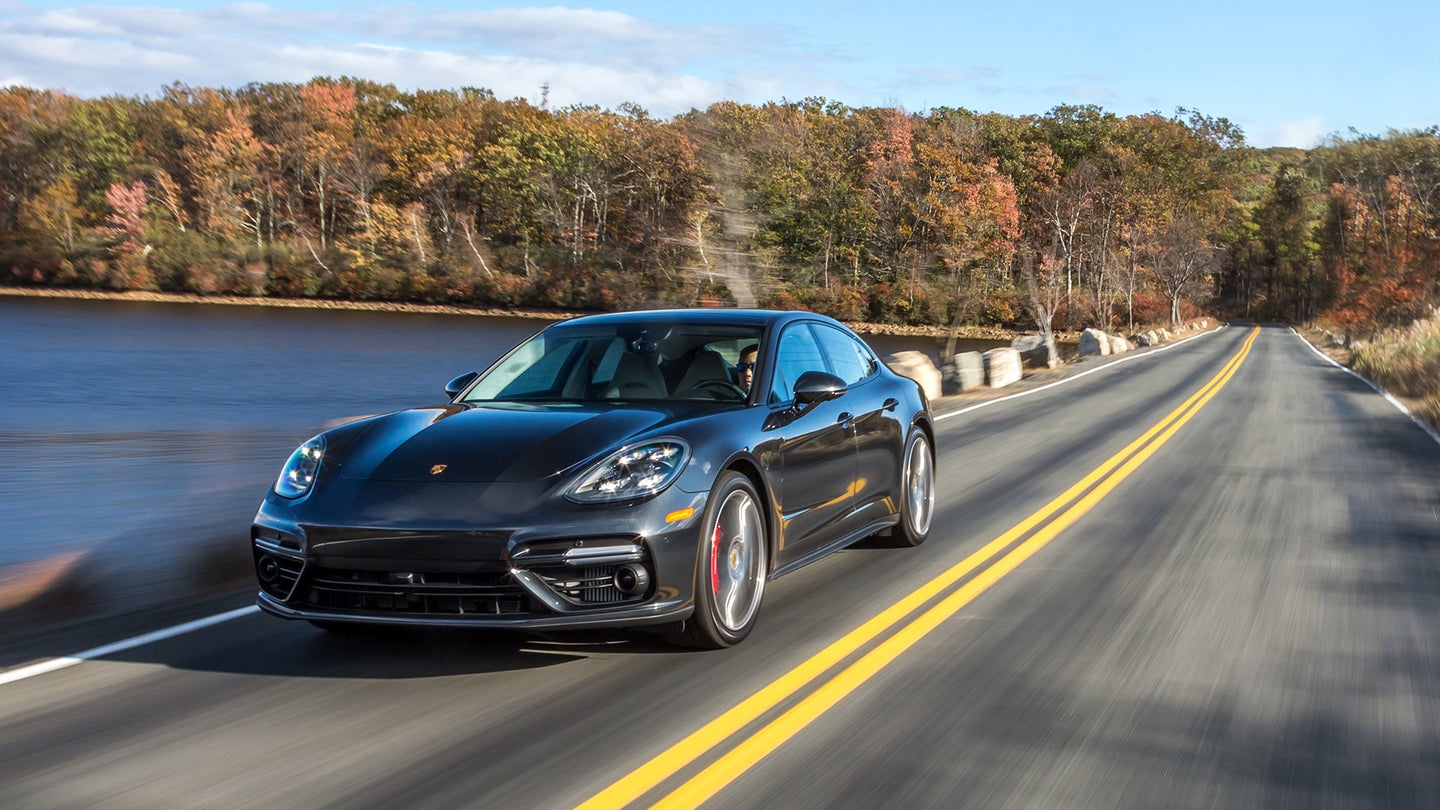 As hard as Porsche executives seem like they don't want you to do so, it's hard not to see the carmaker's new InnoDrive cruise control as a piece of autonomous driving hardware—a key stepping stone on the path to a fun self-driving car. It is, after all, a technology that allows the human behind the wheel to be a little less involved with the car, a feat of engineering freeing up a bit of mental RAM in the driver's head for other things beyond the the act of driving.

But as I said, that's not the way Porsche wants you to look at InnoDrive, now available as part of the $5,370 Assistance Package (which also includes night vision and lane-keep assist) on the second-generation Porsche Panamera. Porsche vice-president Dr. Gernot Dollner said so repeatedly during the pre-test drive briefing in Germany, a hint of exasperation audible in his voice as the assembled American journalists asked again and again about autonomy between bites of buttered breakfast pretzel.

"InnoDrive is only longitudinal; it’s only speed. The driver has to have his hands on the wheel," Dollner said. Sure, just like Tesla's Autopilot system, you can take your hands off the wheel for up to 15 seconds at a time with the system on, “but that’s not the goal.”

"For autonomous driving, there is so much more needed than what we have here," he said. The point of InnoDrive, he said, is to boost efficiency and deliver a comfortable ride. "It’s not a system for cornering,” Dollner said. “It’s for highway driving and country roads—for relaxed driving.”

In fact, Porsche describes the system as an efficiency measure. (Indeed, one engineer said the system was in part made as a way to help electric cars, so you can probably expect to see it on the upcoming Mission E.)

InnoDrive, simply put, is back road cruise control. It combines 3-D, high-definition road information from the car's GPS with real-time data culled from the car's systems to know how fast it can go on any road. Nav data provides guidance regarding the curve angles, height, and slopes over the course of the next 1.8 miles; the car then uses the on-board cameras to detect traffic sign info and sensor data from steering wheel and drive wheels to determine weather and available grip, informing the Porsche when and how to speed up and slow down using the throttle, brakes, and transmission.

If traffic pulls in front of you, the adaptive cruise control—a necessary add-on for InnoDrive that comes part and parcel with it—will restrain the car as needed, just as it would on the highway. If the road surface is slippery, the traction control tells it to slow down. It all operates using sensors and navigation data pre-baked into the car instead of depending on an over-the-air data connection, so the system will work even in the sort of backwood boonies where cell-based Internet access is as hard to find as a decent cup of coffee. (As a result of the need for that quality nav data, InnoDrive currently is restricted to parts of North America and Europe.)

InnoDrive works most effectively when it can sync up with a route in the navigation system, so it knows exactly where you're going and can plan ahead appropriately; used thusly, the system can be as much as 10 percent more efficient than a human driver would be on that same route, as it smooths out all those tiny excessive accelerations and decelerations that kill gas mileage by a thousand cuts. Even without the nav system activated, however, Porsche says it's still more efficient than manual driving.

Like many new driving assistance technologies, using InnoDrive for the first time requires a leap of faith, as I found firsthand climbing behind the wheel of a Panamera equipped with the technology in the German countryside. At times—like when the car is careening towards a sharp turn and every instinct in your brain is screaming to stomp the brake—testing it out feels like the automotive journalist's equivalent of Butch and Sundance's leap into a raging river.

But this is Porsche we're talking about here. InnoDrive works as advertised, slowing down for turns and roundabouts with clockwork precision. Indeed, there's something of a thrill that comes from letting the car choose its own speed through corners, trusting it to show you what its hardware and software can do while you concentrate on steering as though operating the world's most lifelike VR game. Apparently, an early version of the system was so capable in Sport Plus mode, it left even Porsche's experienced drivers unsettled. (This, it seems, was likely the early version capable of taking corners at 0.7 g.) The production InnoDrive is far less threatening, but with the car in Sport mode, it can still hustle down a B-road with a speed that's liable to shock Grandma. Or Mom. Or, really, anyone who doesn't have an unironic nickname along the lines of "Maverick" or "Iceman."

But forget InnoDrive's limitations at your own risk. Well, yours and everyone around you, because expecting the system to do things it can't—like, say, stop at an intersection—is a recipe for a crash. It doesn't turn a Porsche into a self-driving car; it's not even quite Tesla's Autopilot, not Mercedes-Benz's Drive Pilot. It'd be unfair to call it a lesser system; it simply has a different set of priorities, ones more in line with the spirit of the company that created it, which has always lived at the the intersection of technology and performance.

So what, exactly, is it for? That's the question I struggled with while steering—I can't really call it driving, not with my feet free to dance a jig as the car wound its way through turn after turn—through the paved, winding paths north of Stuttgart. The system is of no use on wide-open highways, where the curves are so gentle, if you have to slow down for them you're doing it wrong. It's made for use on two-lanes laden with crests and curves. Thing is...don't people buy Porsches specifically because they enjoy things like driving down back roads? A Porsche designed to drive itself down a fun stretch of asphalt seems like a sex doll designed only to pleasure itself while you watch.

The best real-world use I could come up with for InnoDrive was as a sort of "sightseeing mode." On winding roads you've never driven before, it's far better than you at knowing when to brake or how hard to hit the gas, delivering silky-smooth inputs and leaving you to steer while admiring the scenery. If ever leaf-peeper in New England used InnoDrive, the nightmare that is foliage traffic would vanish instantly. Likewise, if you were more interested in taking in the sights of California's Highway 1 than driving it, InnoDrive would be a perfect co-pilot. But if that were the case...why the hell did you buy a Porsche in the first place?