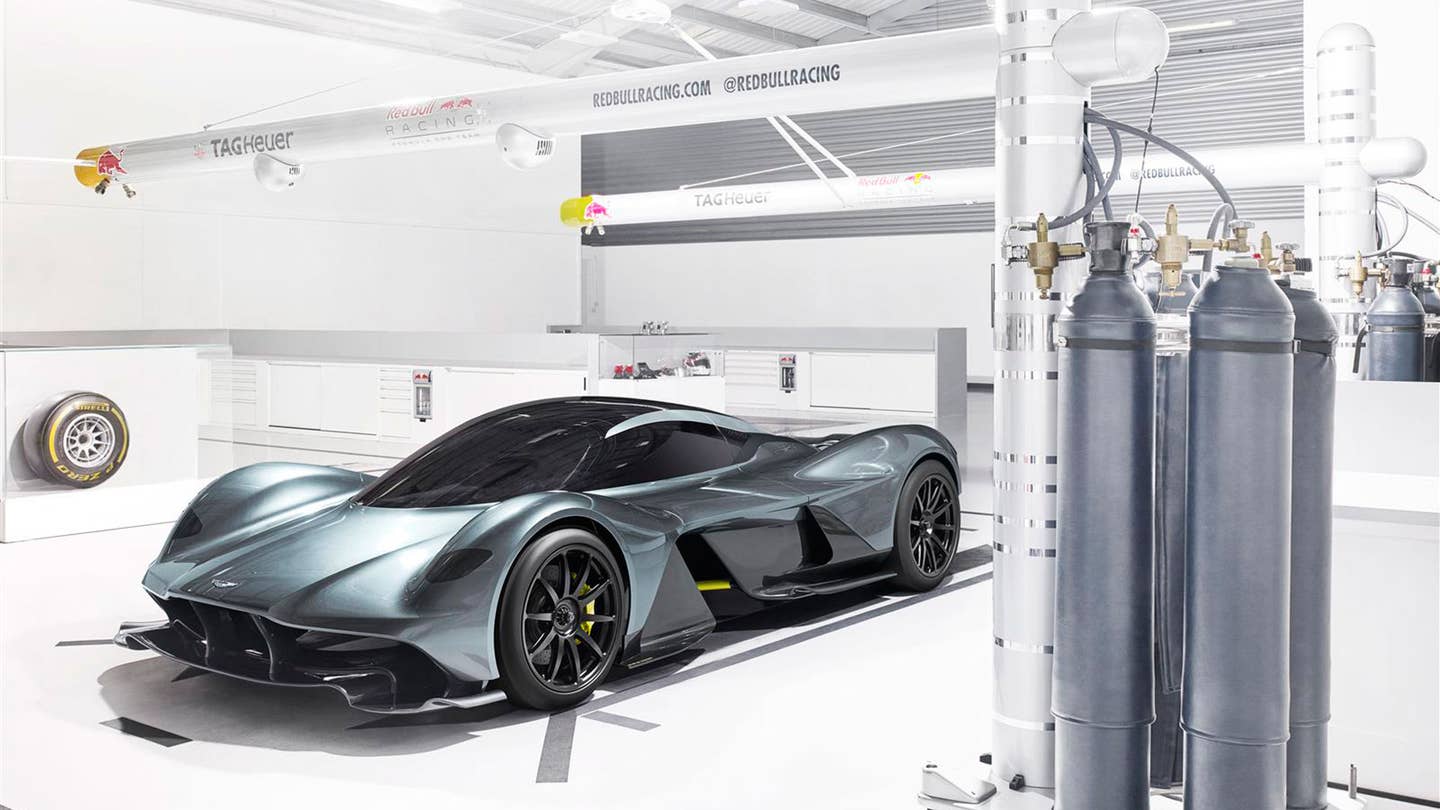 The sultry, slippery shape you see before you is the world's best look yet at the Aston Martin code-named AM-RB 001, the first streetable collaboration between the British sports car manufacturer and energy-drink maker-slash-extreme sports sponsor Red Bull. Revealed today, the AM-RB 001 is meant to vault Aston Martin into the rarified pack of cars that includes the Porsche 918 Spyder, the Ferrari LaFerrari, the Pagani Huayra, and the McLaren P1—though with a race-derived simplicity that eschews turbochargers or superchargers.

The best part? According to Aston, the AM-RB 001 should boast a one horsepower-to-one kilogram power-to-weight ratio. That is, one Anglo-Saxon horsepower for every 2.2 pounds of carbon-fiber, steel and Alcantara. Currently, the Koenigsegg One:1—so-named for its power-to-weight ratio—is the only hypercar to boast such an impressive balance between power and mass.

While ostensibly a collaboration between two companies, the Aston Martin AM-RB 001 was really a collaboration between three men: Adrian Newey, Red Bull Racing’s chief technical officer and Formula One designer; Marek Reichman, Aston Martin’s chief creative officer, and David King, the carmaker's chief special operations Officer. The trio undertook the project with the intention of bringing a lacing of Aston Martin’s grand-touring ethos to a racecar, and imbuing an Aston Martin with some of Red Bull Racing’s all-out ferocity and speed.

The aerodynamics, developed by Newey, offer what Aston calls “unprecedented levels” of downforce for a street-going car. Most of the aero is generated by the underbody, leaving most exterior surfaces smooth and shapely. David King is heading up production, which will take place at Gaydon in a facility built a few years ago to make the then-dominant Aston Martin One-77. Due to the limited nature of the run, between 99 and 150 cars, owners will be able to specify their AM-RB 001s exactly to their liking—it will be bespoke from the “tyres” up. 25 track-only versions will push things to even wilder territory, reportedly being able to lap Silverstone every bit as quickly as a Le Mans prototype.

On the heels of the One-77 and Vulcan, this special project is a mighty feat from a company whose future, as recently as a couple of years ago, was in on shaky ground. Suffice it to say: we’re mighty excited to see the stats on this car, and even more so for what’s to come with what we hope will be the AM-RB 002, 003, and so on down the road. This naturally-aspirated car might not have the turbos of the world's fastest, but it does have wings.