A true endurance race for Porsche ends on the podium, but could have been so much more 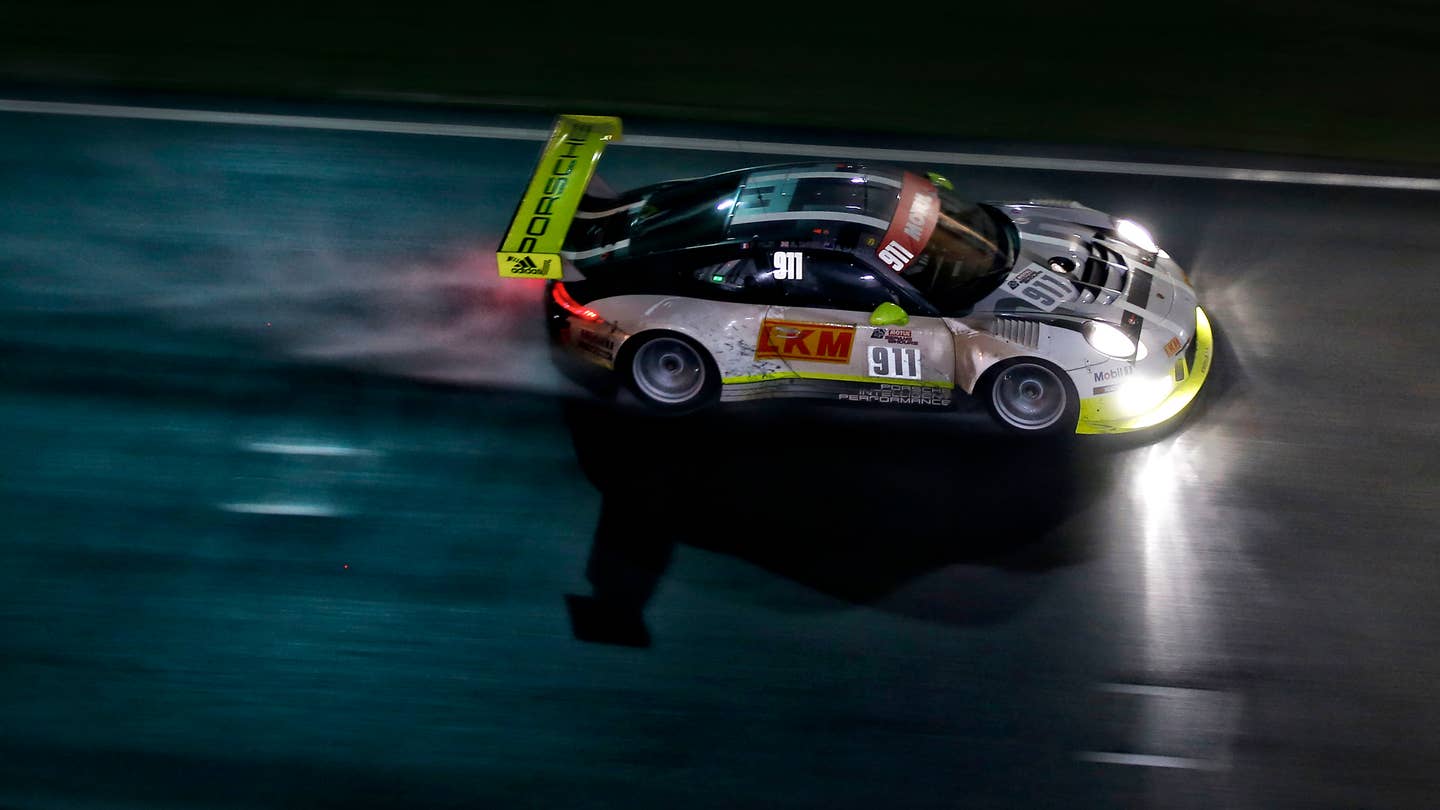 Saturday's 12 hour race in Malaysia ended Porsche's assault on sports car racing for the 2016 season. While the team, consisting of a pair of Manthey Racing prepared 911 GT3 R racers, appeared to be well set up for the race, having grabbed the pole position and dominated the early hours of the race, the best they could salvage was a second and fifth position finish. The race was pockmarked by failures from nearly everyone, as well as adverse conditions for much of the night-section of the race. This was an exciting, old-school endurance kind of race, and the mantra "To finish first, you must first finish" holds true even today. Porsche fought well, and clicked off some truly impressive laps, but unfortunate issues cost them the race victory. Audi, fielding a pair of Phoenix Racing R8 LMS, brought them home first and third. This endurance race was important to Porsche, Audi, Ferrari, and McLaren as it represented the final round of the Intercontinental GT Challenge series.

On race day, the circuit was hot and humid, taking its toll on the cars and the drivers. As the green flag waved, the pole-sitting Porsche of Richard Lietz was overwhelmed by his teammate Earl Bamber who made a mega start from third on the grid. As Bamber streaked off into the distance, there was an incredible battle between Lietz behind, Alvaro Parente's McLaren 650S, and Alessandro Pierguidi's Ferrari 488 GT3. It was instantly evident that the Porsches were not able to make as many miles on a tank of fuel, pitting a full lap earlier than the rest of the competition. As a safety car came out in the second hour, Lietz' teammate Fred Mako moved the #912 car up into second, setting up a dominant Porsche 1-2 run. They maintained this for a number of laps until it started to rain at about four and a half hours in. The pair of Porsches were caught off guard as the rain started to fall and they lost significant time on course before they could pit for wet weather tires.

Near the halfway mark of the race, The #912 car started to notice braking inconsistencies and were forced to pit for a front pad and rotor change that cost them a lot of time on course. Later, once the rain had dried and the cars were back on slick tires, the #911 car was forced to pit for an unscheduled brake change as well. Both cars lost at least one lap with the swap, and it left them on the back foot for the competition, sitting in fourth and fifth. Earl Bamber, who spends much of his year in Malaysia, was not satisfied with this position on what is effectively his home circuit and put in a stellar charge toward the front. Rain started to fall once again and Bambi made lemonade with the lemons, slicing through the standing water on track to carve his way through the field. Ultimately the finish saw Pilet/Tandy/Bamber finish in second, some five laps down from the leading Audi (who had suffered zero problems and no unscheduled pit stops). The Lietz/Christensen/Makowieki car finished down in fifth overall, an additional two laps in arrears.

This was the GT3 R's first full season of competition, having debuted at Daytona last January. The car itself saw successes in IMSA, Pirelli World Challenge, and VLN endurance races at the Nurburgring. Finishing second in one of the biggest GT3 races of the season is nothing to be upset about, but having started the race from Pole, Porsche was certainly hoping for more. Onward and Upward, the Daytona 24 Hour race is just over a month away.

Quotes after the race

Dr Frank-Steffen Walliser, Head of Porsche Motorsport:
“This was a race of highs and lows in very difficult weather conditions. Initially, we had a bit of a problem getting our wet tyres to really work. Once we got to grips with that the performance was there immediately. After the safety car phase, Earl put in a commanding drive to second place. That was really great. Although we were a little unlucky with the caution phases, all in all it was a good race.”

Earl Bamber (911 GT3 R #911):
“It’s fantastic to finish the season on the podium. We were going very well in the dry and we were leading for a long time. When it began to drizzle we had problems with the tyres. But once heavy rain set in we were back in strong form. It was a very difficult race, but a good result for Porsche.”

Patrick Pilet (911 GT3 R #911):
“This was our first time competing in Sepang and initially we had to get used to the many different conditions – and also to the fact that the weather forecast wasn’t quite as reliable as in Europe or the USA. What’s more, even if its damp, you can drive almost as fast on slicks as on rain tyres here, because even when it rains the asphalt hardly cools at all. Still, the last race of the year was a great experience.”

Nick Tandy (911 GT3 R #911):
“Our 911 GT3 R performed very strongly in both dry and wet conditions. We were able to post very quick lap times. However, the changing conditions posed problems. That’s where we lost time."

Richard Lietz (911 GT3 R #912):
“All of my four stints were super, the 911 GT3 R ran really well on this track. It was better to drive on used tyres than fresh ones – we had worked on this during practice. Overtaking here was very difficult because everyone was using ABS here and hence they could brake a lot later. The only thing that didn’t fit for us was the result.”

Michael Christensen (911 GT3 R #912):
“That was a tough race. In fact, nothing ran as we’d imagined. Unfortunately, our strategy didn’t always work. We were in the pits twice under green, both times just before the caution phase, which our competitors then used to their advantage. We couldn’t make up the lost time.”

Frédéric Makowiecki (911 GT3 R #912):
“On a dry racetrack we did very well with the 911 GT3 R and were in a position to fight for the lead. But when it began to rain we had a bit of bad luck with our pit stop, which came just before a safety car phase. We lost an entire lap because of that. Having to change the brakes cost us another lap. It just wasn’t our day today, but for Porsche it was a successful conclusion to the season.” 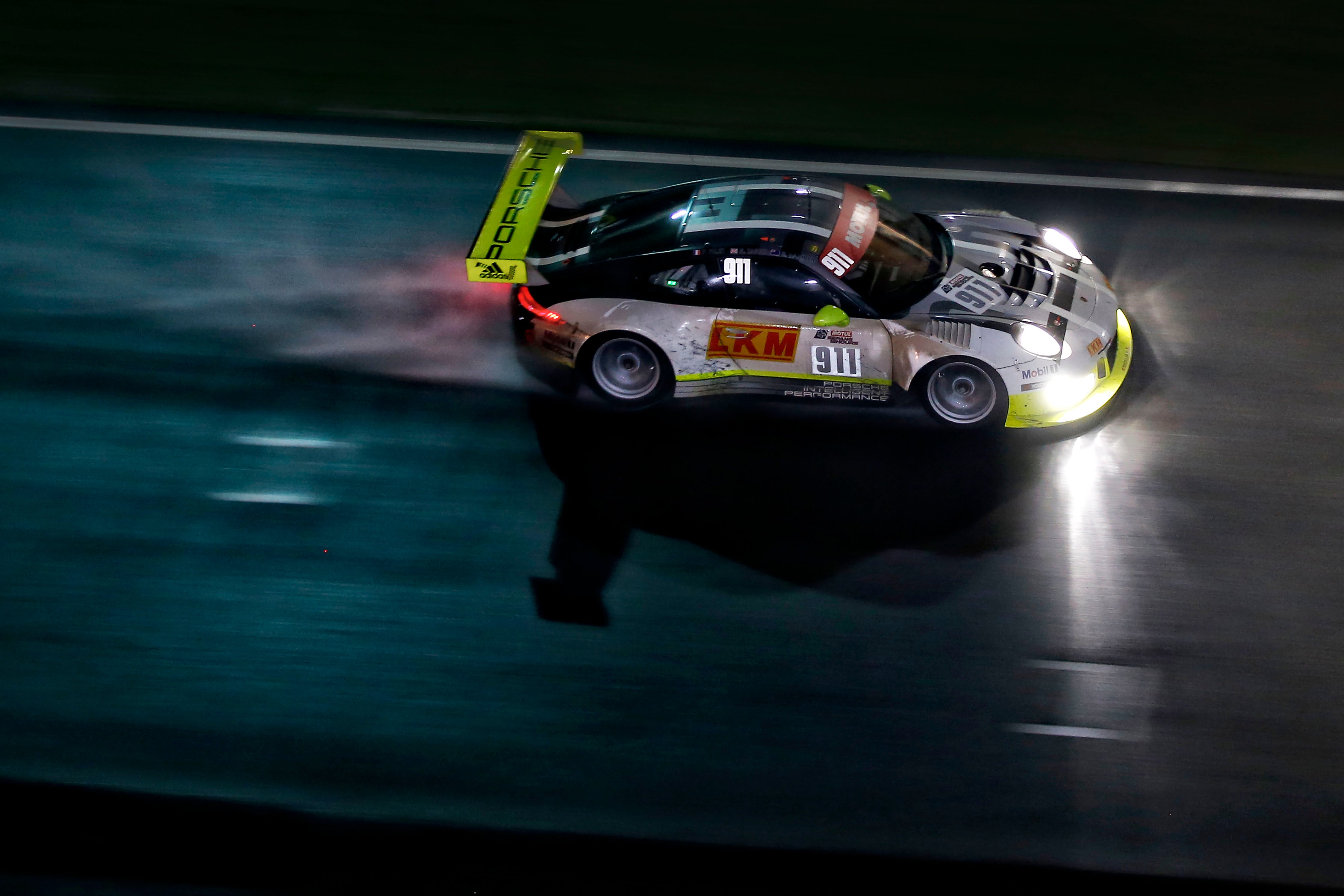 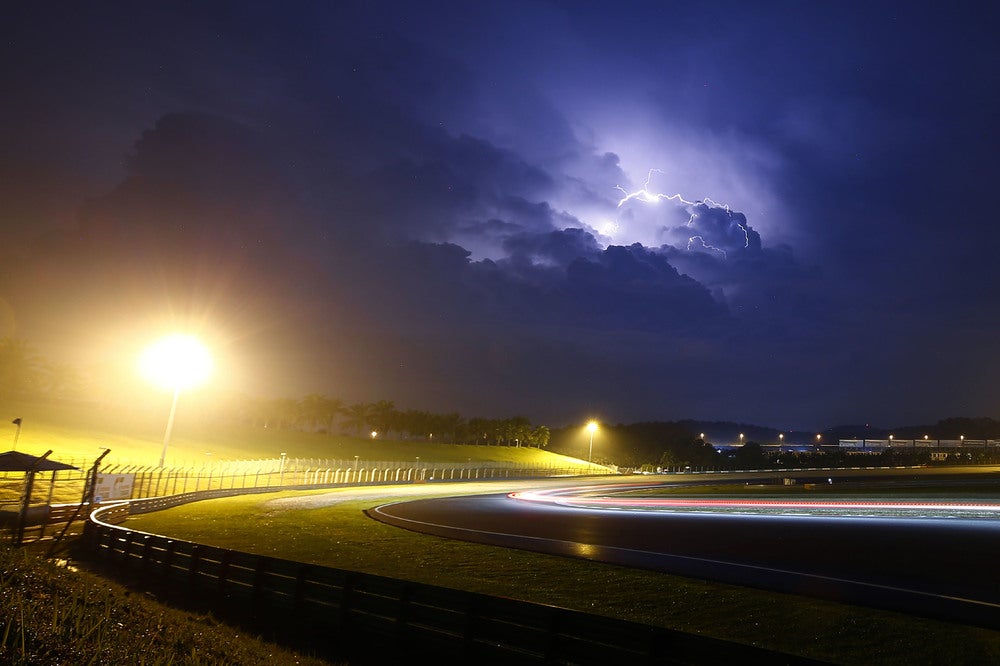 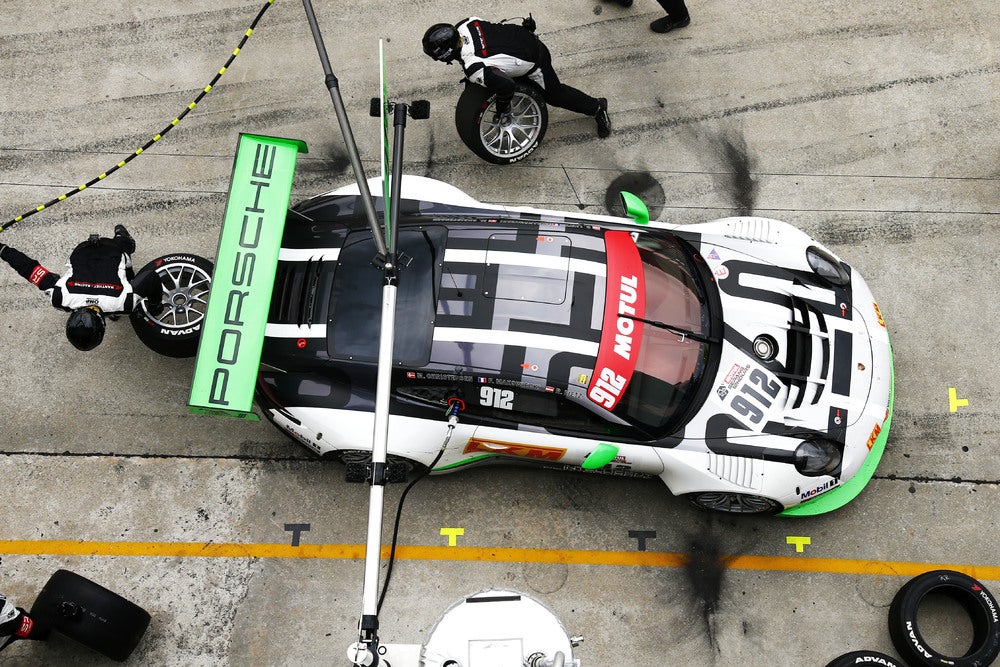 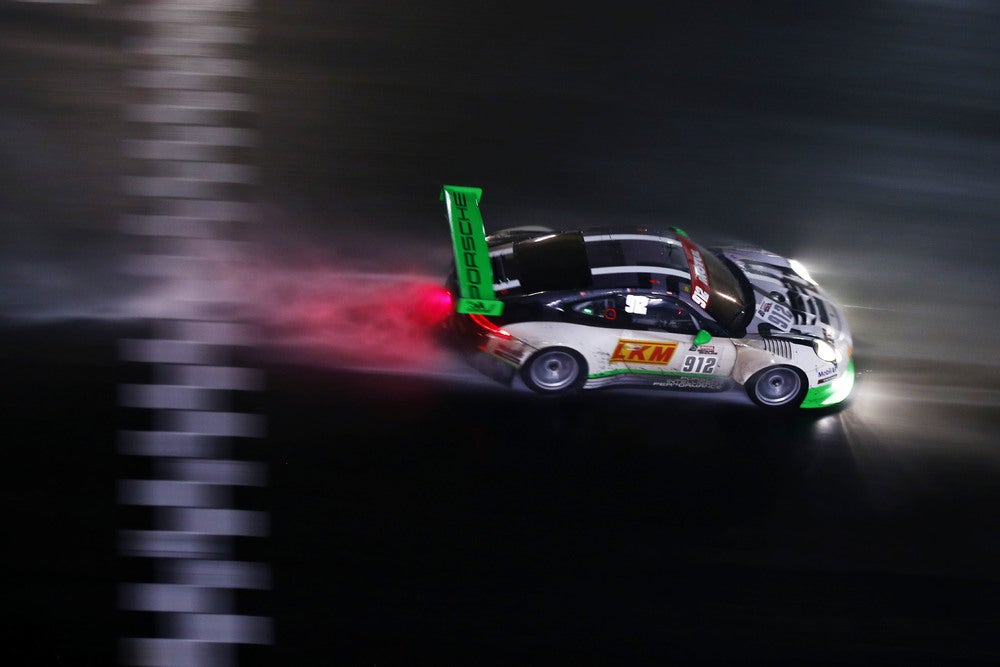 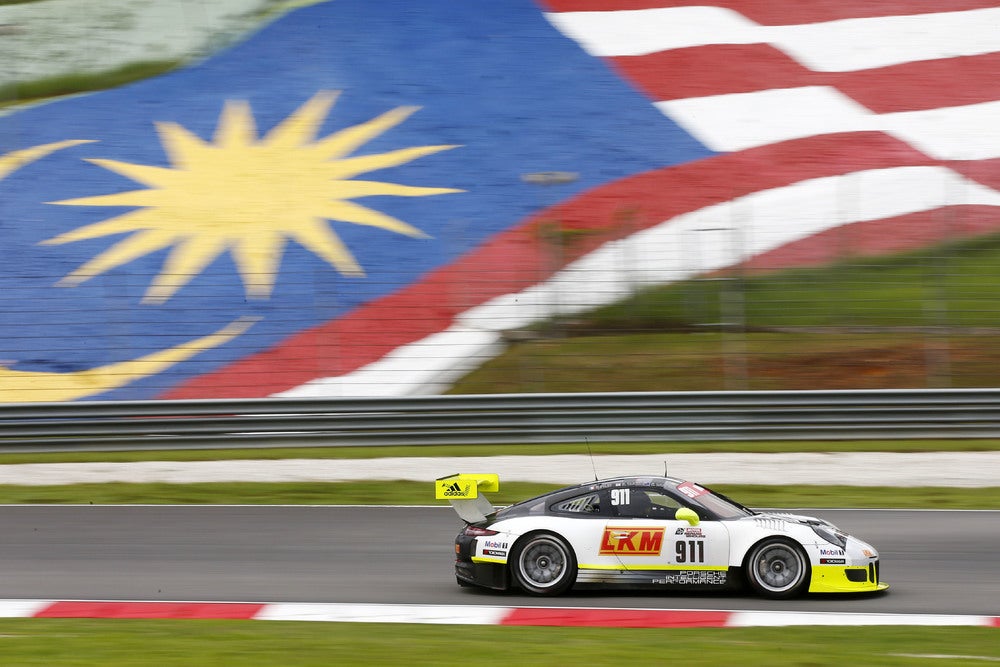 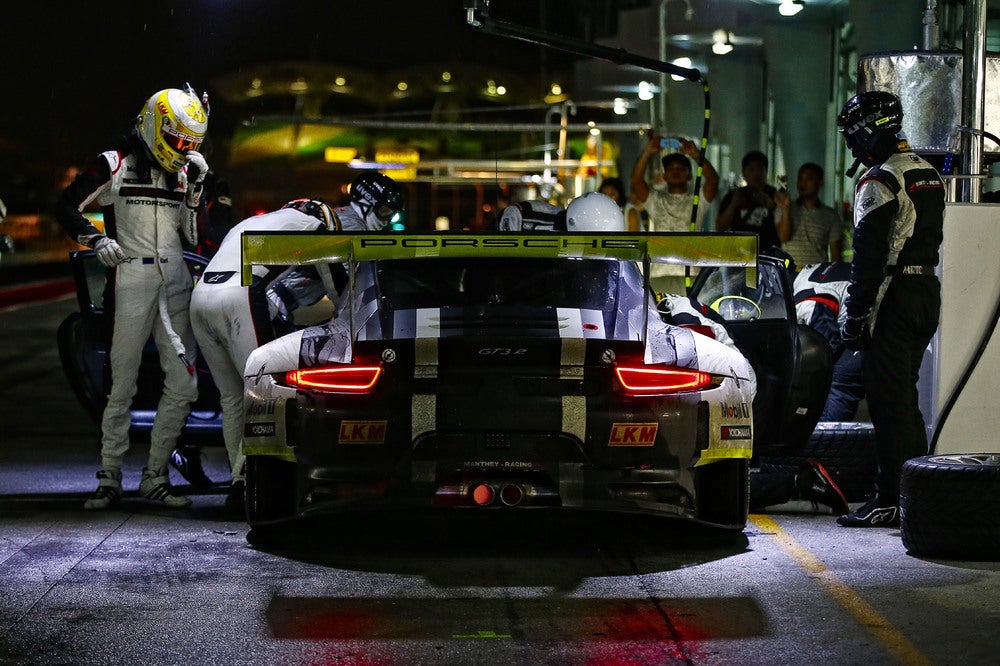 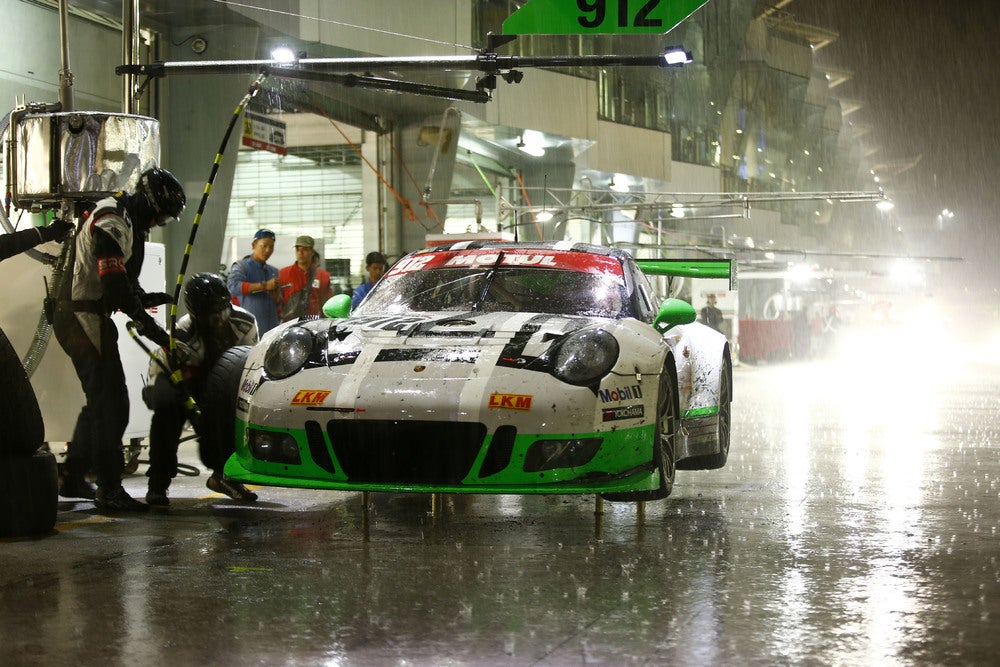