Taking Porsche’s newest Boxster S against its logical competition the Jaguar F-Type V6 S is the smart move. Which one is the better buy? 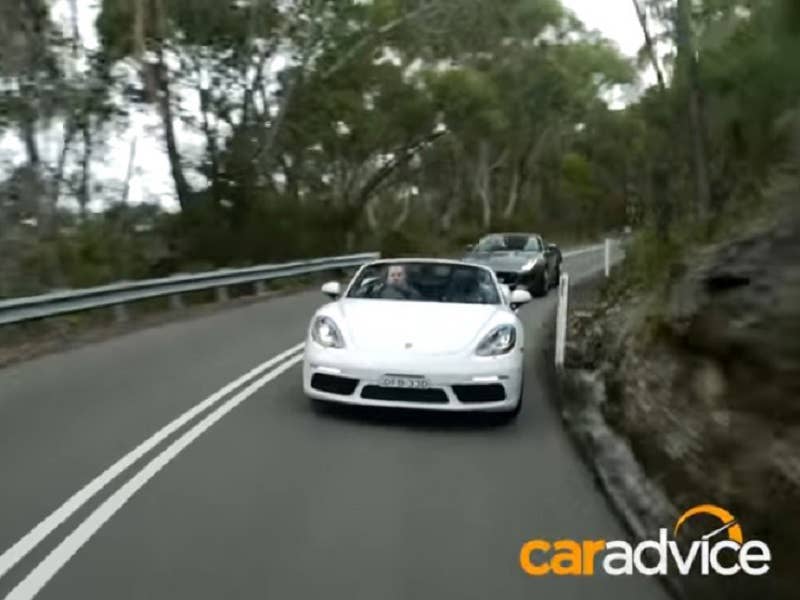 In this video from Car Advice, a couple of blokes in 'Straya give their take on the best 'midlife-crisis' vehicle on the market today. If you're reaching middle-age, do you buy the clinical German roadster, or do you buy the hooligan Brit ragtop? While the pricing dollar figures and right-hand drive of these cars is irrelevant to North American readers, the sentiments stand. Both cars offer a different take on the experience; The Porsche has practical German engineering on its side, while the Jaguar has sentimentality and shouty-ness backing it up.

One of the major points that they make in this film is the fact that the Jaguar now sounds leaps-and-bounds (pun intended) better than the Boxster. The German's flat-six aria vocal cords have been snipped in favor of a flatulent turbocharged flat four. The Jag's V6 still sounds as sonorous as ever, and wins that little test hands down. The Boxster, though, is lighter, is easier to drive quickly, and costs a bit less. Those are metrics that are difficult to argue with. Porsche has built a better car in the 718 Boxster, but sapped some of the emotional response that the old car featured. At the end of the day, a midlife crisis is about emotional purchases, so if having a measurably better driving experience on paper is important to you, you'll pick the Boxster. If you want your car to stir your soul more than shouts about its skidpad numbers, you'll buy the Jag.

Check out the video for the full story behind both cars. It's a good watch, just make sure you turn down the volume when the Boxster drives past.