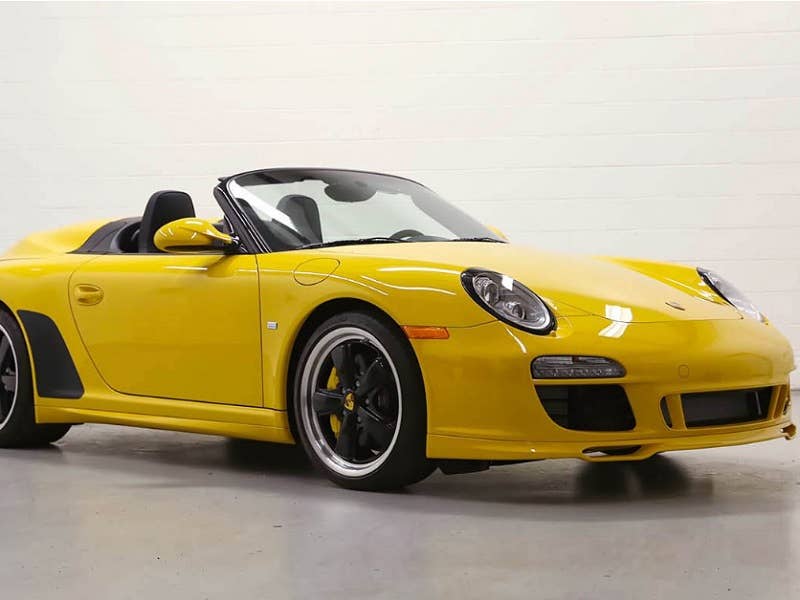 This gorgeous one-of-one Speed Yellow Speedster is for sale, and you could be its third owner ever. Being that the car has just 905 miles on the odometer, you could be the lucky mug to cross the 4-digit barrier with this car. It's barely been broken in, and it's only used about three full tanks of gasoline since it left the factory back in 2011. If you thought the 911R was rare with 991 units built, the 997 Speedster had a mere 356 copies built, and only 100 of them were earmarked for US consumption. It's a rare bird on its own, but the fact that the vast majority of them were sold in Carrera White and Pure Blue means that Paint-to-Sample cars like this one are truly once in a lifetime opportunities.

This little two-seat drop-top pays homage to the 356 Speedster of the 1950s, which was then aped by the 1989 911 Speedster, and the 964 Speedster. Some might contend that the factory hard-tonneau might make the car a bit frumpy when paired with the shorter and more rakish windshield, and I'll admit that with the top up it's hardly a gorgeous sight, but with the top lowered (as it should always be) this car is one of the most attractive modern 911 designs out there. Driving a rare 997 like this is a truly great experience, as I believe this generation cuts the perfect balance between comfort and sportiness (more comfortable than a 996 and more nimble and lithe than a 991).

The car is available from Sloan Cars in Connecticut, and though a price is not listed, you can be almost certain that this will be an investment-grade Porsche that should not be passed up. If you are looking for the perfect Speedster to add to your expanding Porsche collection, look no further, this might be the best one built. Don't wait, go check it out.