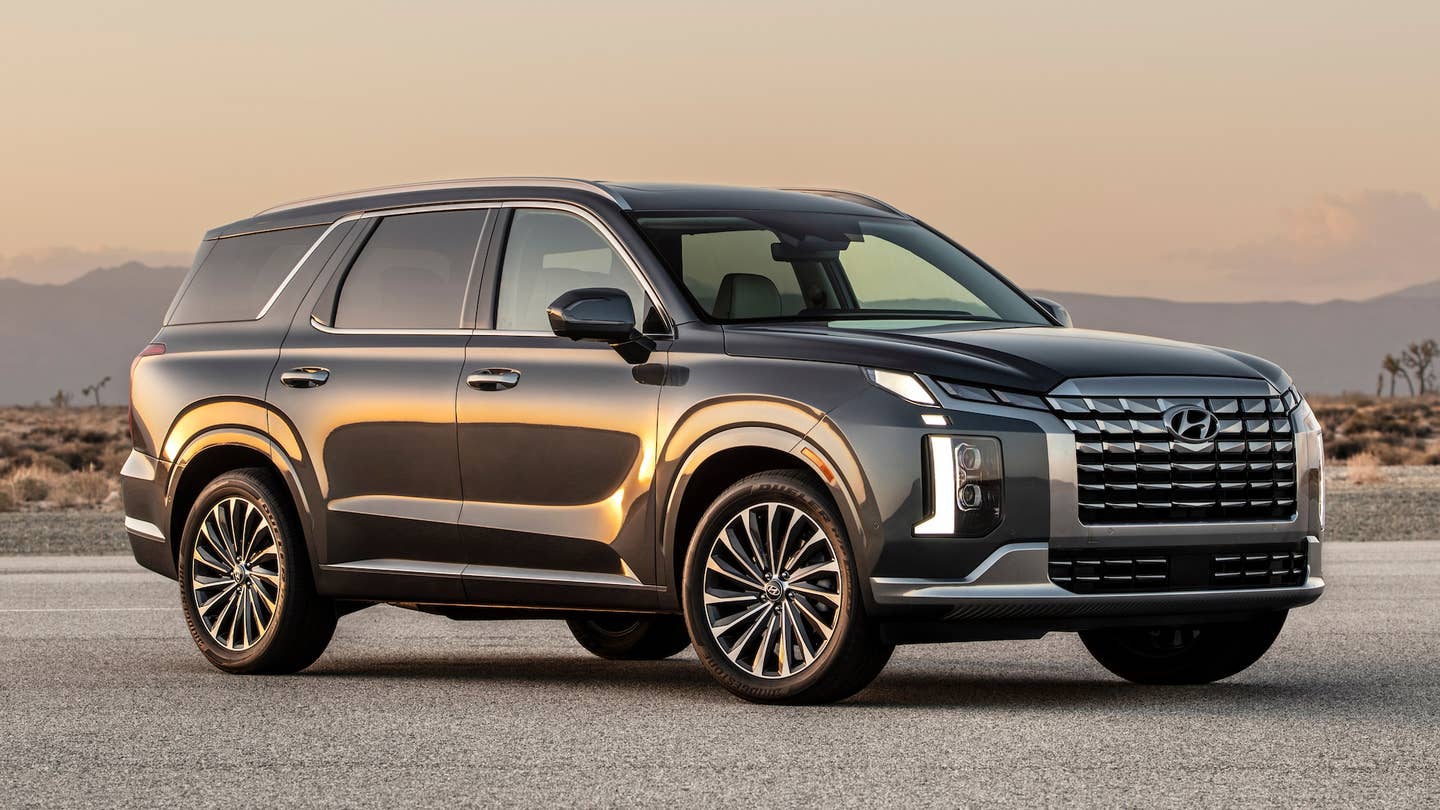 Based on how wildly popular it's been among consumers, Hyundai probably didn't have to update this crossover as soon as it did. But it did and as promised, the facelifted 2023 Hyundai Palisade has made its debut at the New York International Auto Show. It brings an updated style, a new, more rugged-looking XRT trim, and more equipment throughout that should make it an even stronger luxury SUV-undercutting proposition than before.

Style-wise, the front end is now sharper-looking, featuring headlights that appear to seamlessly blend into the grille from afar. Said grille was clearly designed to fall in line with the maws of the new Tucson and Santa Cruz while new 20-inch wheels further up its aesthetics game.

The Palisade's interior is also slightly tweaked. For starters, the infotainment touchscreen now measures 12 inches (up from 10.25 inches previously) and sits above a new air vent design. This setup is accompanied by a new steering wheel seemingly taken from the current Sonata, as well as new seating surfaces throughout. Speaking of seats, the driver's chair now features Ergo Motion, a feature trickled down from the company's Genesis luxury arm that subtly and strategically moves the seat cushions around to relieve fatigue on long drives. Also new for the 2023 Palisade are heated rear seats and ventilation for the second-row seats. (Stay tuned for the 2026 Palisade in which Hyundai will surely ventilate those third-row seats as well.) Further making life more comfortable for rear passengers is the addition of acoustic-laminated glass for the rear doors on the Calligraphy model.

Apple CarPlay and Android Auto are gimmes but the refreshed Palisade now features Wi-Fi hotspot capability as well as quicker phone chargers both wireless and USB-C wired. Owners can also now use their iPhone, Apple Watch, or Samsung Galaxy phone as a proximity key, which can be shared digitally.

Some safety and assisted-driving enhancements include auto-dimming side mirrors, a digital rearview mirror, rear side airbags that are now standard, and improved remote smart park assist, forward collision avoidance, and Highway Driving Assist.

Just like it was before, the Hyundai Palisade is powered by a 3.8-liter V6 making 291 horsepower and 262 pound-feet of torque. Accepting power from an eight-speed auto, the big Hyundai's all-wheel-drive system now features a Tow Mode that holds lower gears longer for, y'know, better towing. With trailer brakes, the Palisade can tow up to 5,000 pounds—that number shrinks to 1,650 pounds without trailer brakes.

Those looking for a more rough-and-tumble-looking Palisade can now select the new XRT trim. In addition to its own 20-inch wheels, this darker, more rugged-looking version gets different fascias with "skid plate design elements" (i.e. not real skid plates but rather things that look like skid plates), different trim on the lower doors, a darker grille, black roof rails, black leatherette on the inside, and a sunroof. Sadly, Hyundai did not release any photos of the Palisade XRT.

The refreshed 2023 Hyundai Palisade will hit dealerships in the summer.

Got a tip or question for the author about the new Palisade? You can reach them here: chris.tsui@thedrive.com

It’ll debut right after the refreshed Hyundai Palisade gets its time in the spotlight at next week’s NY Auto Show.