The so-called Bayside Canadian Railway is now at the center of a massive court fight. 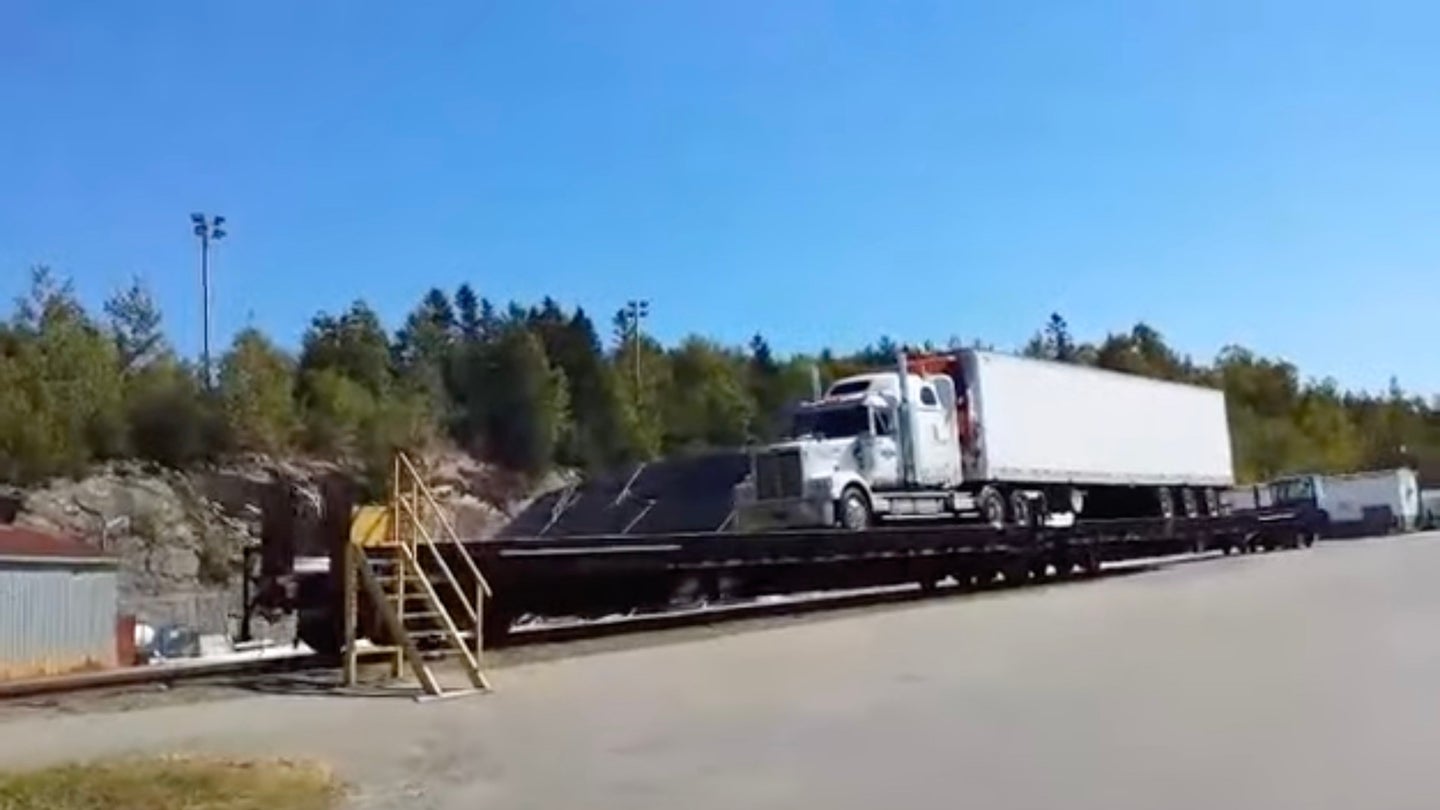 Life is full of loopholes big and small, and sometimes you just have to run a train right through one. That seems to be the case with the Bayside Canadian Railway, anyway, down at the southwestern tip of New Brunswick, Canada. It runs about 200 feet along a clearing just across the St. Croix River from Maine. Its tiny train slowly bumps back and forth, going approximately nowhere. And it's now at the center of a massive court battle between its operators and the U.S. federal government.

Run by a subsidiary of the American Seafood Group, a huge Seattle-based seafood processor that operates in Alaska, the Bayside Canadian Railway is said by the DOJ to fly afoul of the Merchant Marine Act of 1920, according to Anchorage Daily News. Also known as the Jones Act, the law requires shipping between American ports be done with American-built, American-flagged vessels, which the ASG doesn't operate. An exemption known as the third proviso, however, apparently accommodates goods that make part of the journey via rail in Canada.

Hence, when transporting its catch from Dutch Harbor, Alaska to the east coast (via the Panama Canal), ASG used to unload in Canada and move its products over 30 miles on trains by way of the New Brunswick Southern Railway. Beginning around 2012, though, ASG found a different (and presumably cheaper) solution at another port just a few miles from the U.S.-Canada border: the 200-foot-long Bayside Canadian Railway.

When ASG's cargo is unloaded from the ship, it's then packed on a truck, which is then driven onto a flatcar on the track. A small shunter locomotive moves the car up and down the track; having completed its mandatory rail journey in Canada, the truck then drives off the train and down the road a couple miles to the U.S. border where it can now legally cross. You can see a video of it in action below, and yes, it looks as ridiculous as it sounds.

"All was good" between the DOJ and ASG until August 2021 when the DOJ allegedly followed a tip from an insider to discover the line, which was apparently not known to Bayside port officials. DOJ attorneys have reportedly accused ASG subsidiaries Kloosterboer International Forwarding and Alaska Reefer Management of trying to circumvent the Jones Act, stating the company's "actions were not a one-time error or oversight, but rather part of a calculated and secret scheme to find a loophole in the Jones Act, which was only revealed when the government received a tip from a third party."

ASG reportedly insists the rail line fulfills the criteria for Jones Act exemption, stating that the Bayside Canadian Railway is "indisputably a registered Canadian rail line; the goods are loaded onto it and travel a short distance," adding that its products are not legally required to travel a minimum distance. In response, ASG is suing the Department of Homeland Security to deflect fines that amount to over $350 million—nearly 90 percent of the company's 2015 revenue, according to The Seattle Times. That the ASG flouted the spirit of the law seems incontrovertible, but whether it violated the letter is another matter entirely, and one for the court to decide.