How Far Can A Rivian R1T Pull A Trailer Versus a Toyota Tundra?

Electric trucks sure can pull, but can they go the distance? 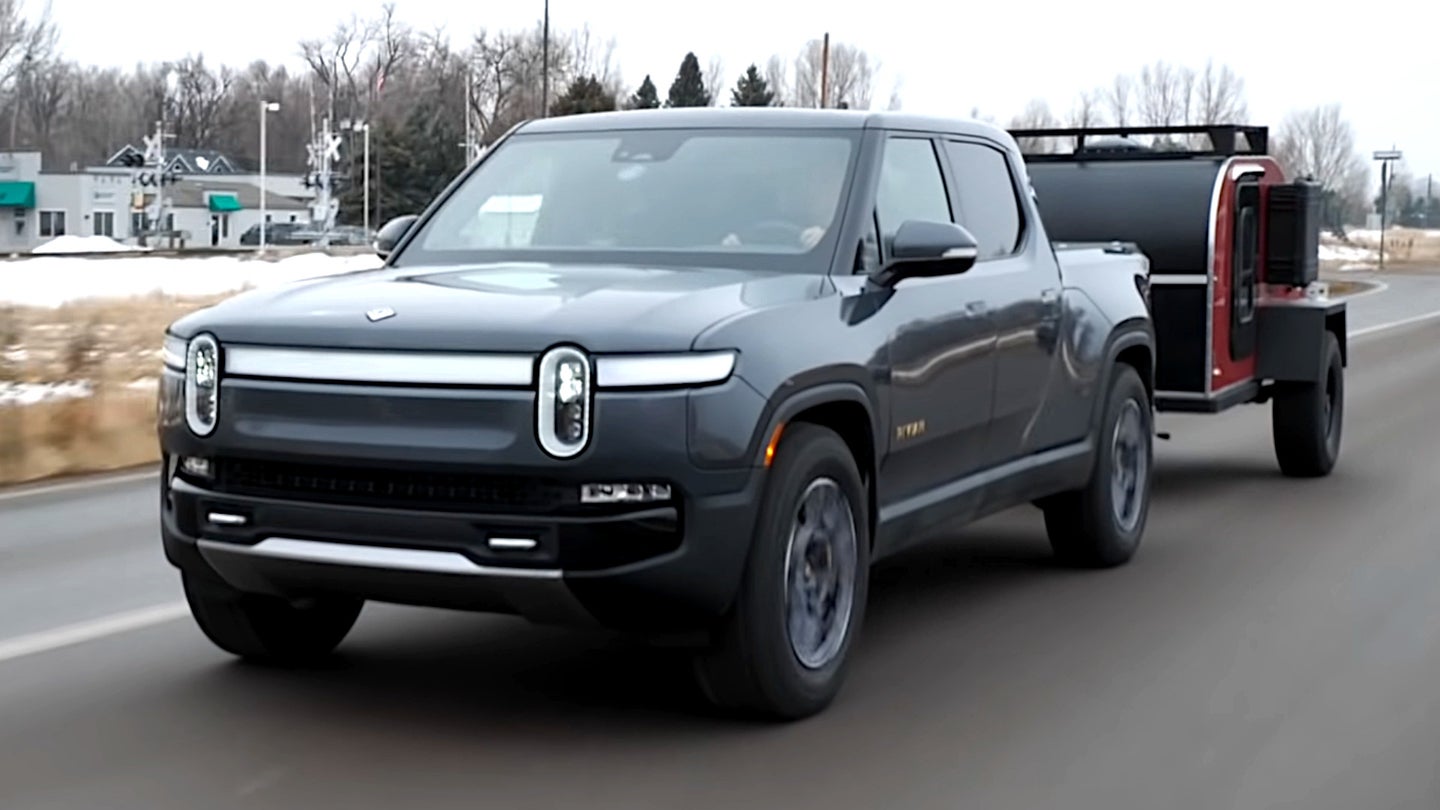 The Rivian R1T has burst on to the scene as a capable electric truck, pairing futuristic good looks with dragstrip performance that can best even the powerful Ram 1500 TRX. However, the truck is also intended to handle more workaday roles, too, like towing. For that very reason, The Fast Lane Truck put the Rivian up against the Toyota Tundra for a thorough test of its real-world towing ability.

As covered by CarBuzz, the aim was to determine how towing a trailer impacted on the range available from the Rivian R1T. The load was chosen as something that might typically be used by an adventurous type driving a Rivian R1T. A Colorado Teardops Classic Line teardrop trailer was hooked up to the hitch, weighing just under 2000 lbs, but coming with a fair bit of drag from its hefty 35-inch tires.

First up was the Rivian, which detects when a trailer is attached and asks the driver if towing mode should be engaged. Notably, it indicates this mode should be used to "prevent vehicle damage." It sets the truck up with a high level of regenerative braking and stiffens the suspension to handle the higher load.

With towing mode engaged, the Rivian states a range estimate of 135 miles, which quickly jumped up to 154 miles out on the highway. It's a significant drop; in contrast, the Launch Edition model with the Adventure Pack usually gets around 280 miles of range when riding on all-terrain tires.

Regardless, with 835 hp and 906 lb-ft of torque, the truck has no trouble pulling the trailer along, perhaps unsurprising given the Rivian is rated to tow up to 11,000 lbs. The test was carried out with the climate control on, set to 69 degrees, and aiming for an average speed of 60mph.

With all said and done,  the Rivian achieved a 153 mile trip in 2 hours, 45 minutes at an average speed of 55.6 mph. It used 91% of its battery to do so, suggesting a total range of around 168 miles if the battery was drained completely. Notably the Rivian did not go into a battery-saving mode at any point during the test, with full power on hand to pull the trailer all the way to the end.

In contrast, the Toyota Tundra was able to stretch its legs far further. Running the same 153 mile circuit, it used just over 10 gallons of fuel, or 32% of its total tank capacity. Extrapolating out, using its full tank capacity, the Tundra could rack up a healthy 473 miles without running out of fuel.

It builds upon earlier testing run by The Fast Lane Truck, where the Rivian was tasked with towing a much heavier vehicle trailer carrying a Ford F-100 pickup. In that trial, the Rivian proved more than able to handle the job in terms of pulling power, but again showed that the loss of range from towing a load can be significant.

It's an interesting comparison and shows that there is a significant range penalty when towing with an electric truck. Obviously, if towing heavy loads long distances is your primary use case for a truck, an electric pickup is probably not for you. However, if you're just needing to get a trailer around the local area, you should find a truck like the Rivian to be more than capable of the job.

From the trailer’s impact on range to the difficulties of charging, here’s a good look into the whole experience.