These helmets will call for help as well as protect your noggin. 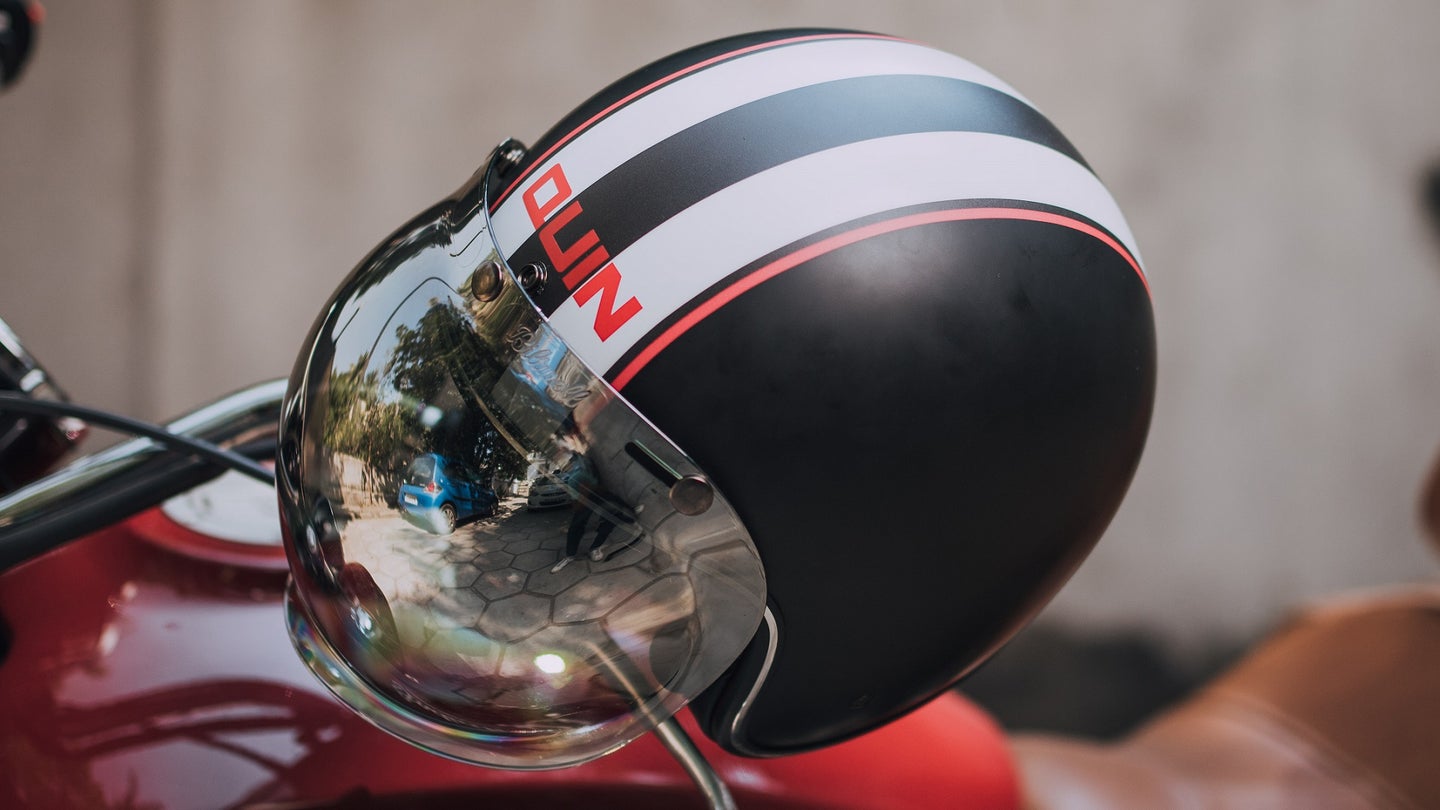 Anirudha Surabhi is no stranger to helmet design. He previously designed the Kranium helmet using a paper design based on the beak of a woodpecker. Laugh all you want, then go watch the crew of Beyond the Press channel successfully make bulletproof armor out of compressed toilet paper. Kranium also worked with the Force India team in 2013 to apply its technology to Formula 1 helmets. When a friend of Surabhi's had a motorcycle accident resulting in brain injury he turned his attention to smart helmets—but not in the usual way.

Surabhi believes that in modern smart helmets the technology is not yet sufficiently advanced to accomplish its goals while not distracting the rider. After testing the NUVIZ head-up display I can understand his point. Instead, Surabhi wanted a helmet that keeps its tech hidden, unlike NUVIZ or the variety of Bluetooth communicators that are tacked onto the outside of a helmet rather than integrated into it. He also wanted limited yet proven reliable technology built into the helmet—specifically, the ability to detect a crash and summon help automatically.

The result is three helmets from Quin Design—the open-face McQ, the full-face Spitfire, and the carbon fiber full-face Ghost which, at 2.8 pounds (1,270 grams), is the lightest smart helmet on the market. All three helmets include the same features and can be updated to add more in the future.

A helmet's most important job is to protect your head, regardless of any other technology. All three of Quin's helmets are already certified by the Department of Transportation and the Economic Commission for Europe. The Ghost is also certified by American Motorcyclist Association and Federation Internationale de Motocyclisme for racing use. At this time they are not Snell certified, mainly because of Snell's five-year testing cycle, and that Snell requires final production units to be submitted for testing, which Quin is still ramping up. Quin does intend to submit helmets for Snell testing, and the certifications they have already earned bode well for its future acceptance.

When it comes to keeping your skull in one piece, Quin's helmets just as effective as any mainstream manufacturer.

When it comes to technology, the only hint that Quin's helmets have any is a small control panel on the outside. There is no bulky control unit, but full Bluetooth connectivity with your phone is supported. There are no visible speakers or a microphone inside, but they're there, hidden beneath the removable liner.

So far this sounds identical to the Sena Momentum helmets, which integrates its industry standard Bluetooth technology into its new line of helmets, but this is where the similarity ends. What the Sena helmets don't have is an integrated accelerometer which will detect a crash, automatically text your preset emergency contact for help, and send your current GPS position.

There are existing smartphone apps, such as Cradar, that are designed to perform this function. But Quin goes much farther with this. Most smartphone accelerometers can't detect more than 8 Gs of force, and most detect less. Quin's design detects far higher G-forces, and will only initiate an emergency call when the force of the crash exceeds 100 Gs. This may seem like a high number, but a 250 G-crash is considered survivable, although severe. Additionally, this prevents a call for help being sent in the event of a minor tip-over, such as in a parking lot.

Another method of preventing false alarms is that both the helmet and the Quin app must detect a high G-force before an alert is sent. This means that if you accidentally drop your helmet or your phone, no alert will be sent. And finally, if a legitimate crash is detected, the app gives the rider five seconds to cancel the automatic call for help before it is sent.

There is also an "SOS" function that can be activated manually. This feature was designed particularly with woman riders in mind, who are unfortunately more prone to harassment than men. But it could help anyone who needs help, for instance, in a road rage situation. When the SOS is activated, an alert will be sent either to your preset emergency contact or to other Quin app users near your location. Unlike a crash, your location will be continuously transmitted so that others can intercept and assist you.

On Tuesday Quin announced a Kickstarter to fund the beginning of helmet production. Naturally, this brings up comparisons to Skully, which raised $2.5 million for a smart helmet project, then never produced it. Quin, on the other hand, has already designed these three helmets, tested the technology, and lined up a manufacturer to produce them. Founder Anirudha Surabhi has brought such projects to fruition before. When we spoke with him, he had all the right answers when it came to questioning Quin's ability to turn these helmets from prototypes into actual products.

Surabhi is already looking beyond Kickstarter as well. Each helmet has a USB port, not only for charging but also for firmware updates. One of these updates, hoped to be released by the end of this year, will add noise canceling to all of Quin's helmets, similar to the upcoming Sena Momentum INC. The helmets themselves will also be updated, improved, and expanded. Quin hopes to add a carbon fiber modular helmet to the lineup by the middle of 2019.

While most smart helmets focus on how many distracting bells and whistles they can offer, similar to auto infotainment systems, Quin has taken a very different approach. While its helmets remain fully connected, they don't offer distracting head-up displays or rear-view cameras. The primary purpose of the technology, like the helmet itself, is to keep you safe. All the fancy gadgets and gizmos out there are of no use to you if you're not alive to enjoy them.