Do this wrong and catastrophic engine damage will result. 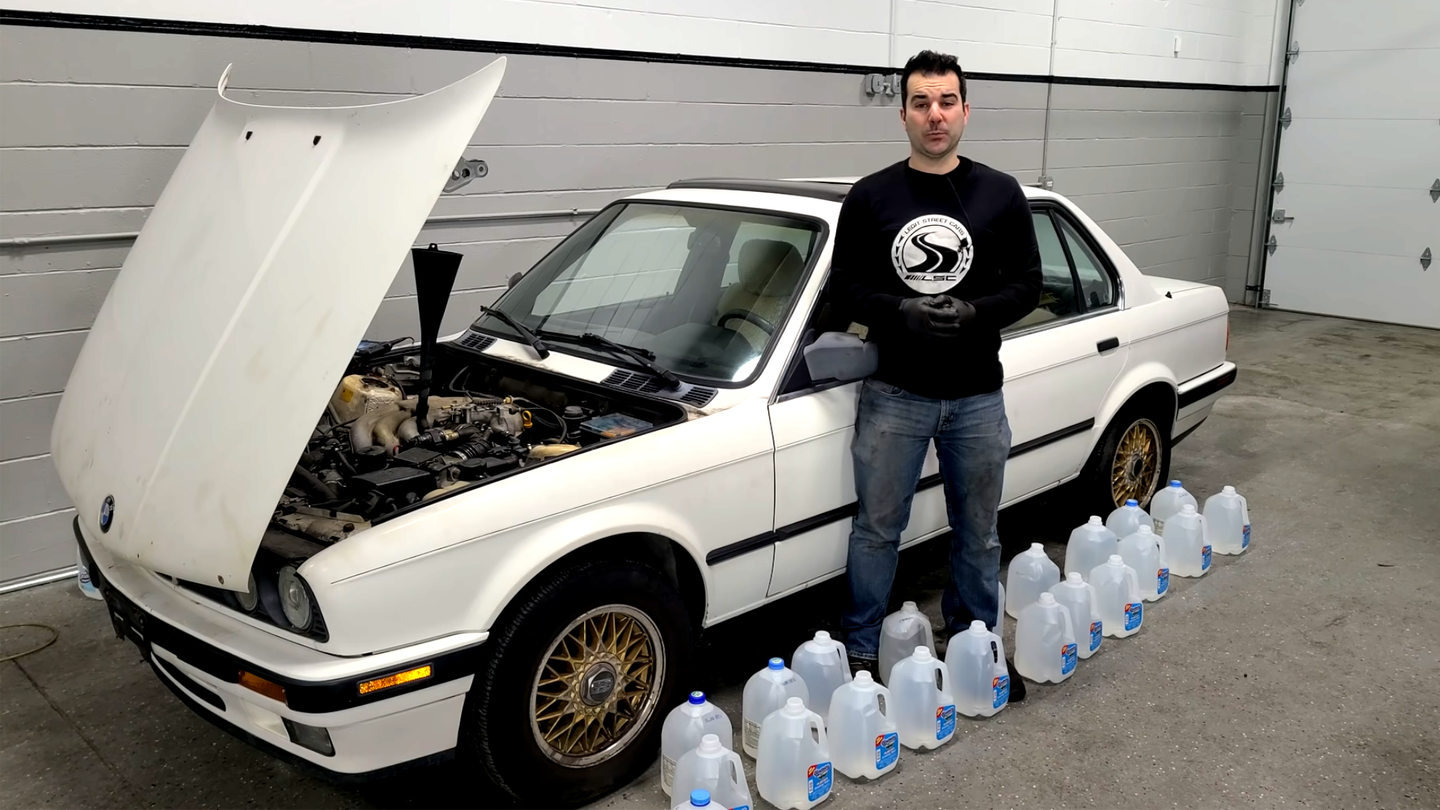 Carbon buildup can cause a loss of engine performance, usually happening on high-mile engines that have plenty of sticky deposits after decades of running. A popular trick dating back to the hot rodding era is to dribble water into the engine's intake, with the idea that it will turn to steam and help clean up the pistons as it passes through the combustion chamber. Youtuber LegitStreetCars decided to put this to the test in extreme fashion.

The vehicle subject to the test is a 1989 BMW 325i, with the E30-series Beemer sporting 174,000 miles on the odometer. The plan was to run 20 gallons of water through the engine to see just how clean the pistons could get. It comes after an earlier experiment, where just 20 ounces of water slowly fed in to the intake helped remove enough carbon to free up a sticking valve.

The first ten gallons of water were delivered into the intake with a funnel via a large hose that was unplugged for the purpose. With such a massive vacuum leak, it took plenty of throttle to keep the engine running. Steam and a little smoke billowed out of the tailpipe, with water fed in at a rate of around a gallon every five to ten minutes. The engine was regularly allowed to warm back up to operating temperature to ensure the water was getting hot enough to do the job.

LegitStreetCars admits that you probably shouldn't try this at home, noting that pouring too much water in at once can hydrolock your engine. This happens when enough water enters the cylinder such that it exceeds the minimum volume when the piston is at top dead center. The piston then attempts to compress the water, which is famously known to be an incompressible fluid. This results in catastrophic engine damage with bent rods being the usual result.

After ten gallons, the test is stopped and the engine inspected. At this point, the sparkplugs look very clean. However, the pistons still look relatively dirty, with only four, five and six looking slightly improved. Our host notes that the issue is probably poor water distribution through the manifold.

For the further ten gallons, a smaller vacuum line is used to feed water in to the engine. It's located directly opposite the throttle body for more even distribution to each runner for each cylinder. The smaller vacuum leak makes it easier to keep car running, and a tube is run straight into the water jug and the engine is allowed to suck the water up via the vacuum generated in the manifold. The water is fed in at a slower rate of roughly 15 minutes per gallon.

In this method, the intake manifold gets very cold as it sucks all the water in. After warming up for ten minutes with no water present, the manifold temperature sits at 73 F, but just a little bit of water intake gets the aluminum manifold down to a chilly 57 F. It shows that the water is capable of sucking up a great deal of heat from the intake charge, something used to great effect by some performance cars.

A more significant improvement is noted after the second ten gallons, but the effect is still mostly noticed on the edges of the pistons. As seen above in the before and after pictures of cylinder 4, the thicker deposits in the middle remain largely unmoved.

LegitStreetCars points out that the method used is not ideal. Pouring in water in this fashion is not super effective compared to typical water or water-methanol injection systems. These are typically installed for cooling the intake charge in boosted applications, but also have a significant cleaning effect on the engine. This is likely down to the effect that the atomizing nozzles used allow the tiny droplets to vaporize far more easily than the large droplets or streams of water fed into the engine using the method shown in this video.

However, other YouTubers have noticed that water can have a noticeable effect on carbon deposits. Project Farm highlighted the significant cleaning results that can be achieved by running water through a flat-head mower engine, as shown in the video above. A small improvement to cylinder compression was also noted in this test, and the amount of carbon removed is plain to see. The path of the water (and steam) is clear, as only some areas of the cylinder head are ridded of the sticky buildup.

Overall, if you want to rid your engine of carbon deposits, water will work, but you may find that Seafoam or other products are a safer way to go without the risk of hydrolocking the engine. Whether water can clean the back-of-valve deposits common in direct injection engines also remains an open question. If you do try this method at your own risk, however, consider using a nozzle that atomizes the water rather than just dribbling it in. You'll likely get better results with that method with just half a gallon of water, versus the results we saw here with twenty.

The author strongly advises readers not to try this at home. Got a tip? Let the author know: lewin@thedrive.com