You may not use them every day, but you’ll be happy that you have them. 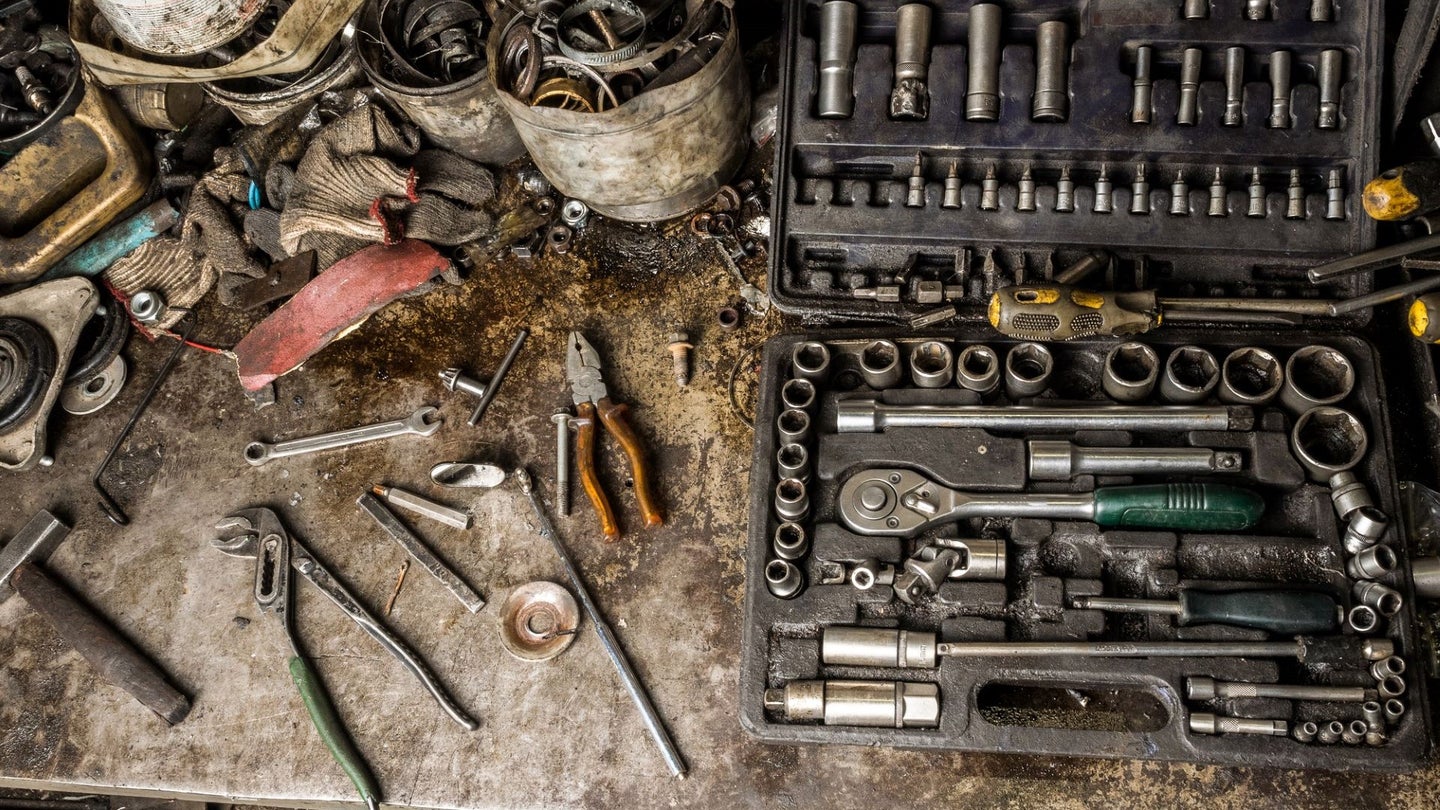 There you are, rolling cylinder one to top dead center. With your elbow in the radiator and knuckles against the fan blade, trying to wrestle that six-point socket back onto the crankshaft as the handle of the breaker bar binds on the radiator hose, you ask yourself, "Is there no better way?" You can't quite get the 1/2-inch drive ratchet over the balancer pulley, and trying from underneath is simply out of the question.

We've been there too, and we've asked that very same question. Luckily for you, we're the kind of people who wind up in those scenarios enough times to start looking for the answer. If this has been a problem for you, or the DIY mechanic in your life, we've got solutions. And if that person says they "don't need anything" for the holidays this year, you may now know something they don't.

There are tools that may seem obscure but are actually essential. Adding some of these to your toolbox will elevate your efficiency and positively reshape your working experience. You won’t use them every day, but they take that one job you can't stand to do and reduce it from a total pain to just another step along the way.

We're here to fill you in on what some of our favorites are. Some are more obvious than others, but all make excellent gifts to yourself or to that special gearhead you want to knock off their feet. Before we get started, we will say that newcomers still want to check out buying guides that cover the basics. You still need a mechanic's toolset, breaker bars, and some other specialty sets to get rolling.

With that out of the way, let's dive in.

If you routinely tear old engines down, try different distributors, or just tinker in general, bringing the engine to TDC is a part of daily life. As we said in the intro, getting on the crankshaft bolt can be a real pain if you're working with a breaker bar and six-point sockets. This tool snaps right onto the end of the breaker bar, giving you the ability to ratchet back and forth, dramatically simplifying the whole ordeal. Obviously, it will prove helpful for many other projects as well.

This Stanley Proto J5447 1/2-Inch Drive Ratchet Adapter isn't the model in our personal collections, but we trust the brand and it sits at a relatively affordable price. It seems to be built pretty well and claims to be ready for 700 ft-lbs of punishment. We're not sure it's wise to run serious torque through devices of the likes regularly, but you'll certainly get plenty of use out of it around the shop.

Save Money With a Spark Plug Cleaner

Spark plugs are cheap enough to be taken for granted. Whether you're reviving some neglected piece of engineering, trying different combinations, or just going through a routine tuneup, it's easy to run down to the parts store and drop $20 or so on a fresh set of plugs. The cost of frequently replacing plugs adds up, though. And just because a plug has a little bit of color to it doesn't mean it's ready for the trash.

A spark plug cleaner is a simple and affordable piece of equipment that is a quick way to put dirty plugs back in the fight. We've put the VCT Pneumatic Air Spark Plug Cleaner Sand Blaster Tool to use in our personal time, and we’ll be the first to say that you still want to give the plugs a pass with a wire brush and a torch after the initial blast. Still, it does expedite the process enough to warrant keeping it around.

Keep Your Ride Clean with This Vacuum from THISWORX (Featured)

Despite the ever-growing collection of tiny leaf particles, dirt, gravel, goldfish crackers, and other tiny things that accumulate on your floorboards, you rarely want to drag a household vacuum cleaner outside to clean them. Come on, they're heavy and cumbersome and, well, just a pain in the butt to wrangle inside your cabin. You want something smaller for the job and that's why the THISWORX car vacuum is good. It's small, light, and designed to reach the spaces where a normal vacuum or shop-vac can't.

Angle head open-end wrenches aren't exactly a well-kept secret. They also aren't exactly standard equipment to be included in mechanic's tool sets, nor are they the first thing suggested when you ask for advice on hand tools. You're going to want to grab a set, though.

The angled head allows you to take a different approach to obscured or hard-to-reach fasteners, giving you the means to work much more efficiently. So much so that you may wind up using them more than the usual box wrenches you’ve got lying around. The reason we're suggesting the Tekton Angle Head Open End Wrench Set is that we know the quality is there, the price is hard to beat, and it covers a decent range of typical hexes.

Linesman Screw Extractor Pliers, for When Life Does Its Thing

For starters, a good set of linemen pliers belongs in every toolbox. They won't replace your locking or needlenose pliers, but they'll come in handy much more than you may initially think. If you're going to get a set, you might as well go with something that'll grip the kind of things that usually ruin your day.

The Vampliers 8-Inch Pro Linesman Screw Extractor Pliers features special notching in the jaws specifically for grabbing ahold of stripped fasteners. Just like that, you now have means to deal with those rounded-out screws that usually call the drill's name.

Basic tools don't cut it when you need to get past basic car maintenance. While they might be able to handle anything directly on top, all the goodies inside are likely out of the question. Because of that, something as simple as a brake line replacement can call for professional help. That's where crow's foot wrenches come to the rescue.

They work to give you a grip in tight spaces where hardware can't be accessed with regular or even stubby wrenches. We're highlighting the Neiko 3/8-Inch and 1/2-Inch Drive Crowfoot Flare Nut Wrench Set because we feel that hardlines are the most likely causes of a claustrophobic flare-up. However, it is worth investing in other crow's foot wrench designs for different types of fasteners you'll encounter deep within.

Give It a Little More Oomph With Screwdriver Bit Sockets

Many screwdrivers have some design element that makes it possible to apply a little more torque on stubborn screws. The shank may have a hex on it, the handle might have a "hanger hole" that's the right size for another shank to slip through, and some handles even feature a hexagonal design that just so happens to fit perfectly into a socket. While these are all great qualities, they aren't always the best solution.

The Tekton 8-Piece 3/8-Inch Drive Phillips/Slotted Bit Socket Set essentially turns your ratchet into a screwdriver. That means you can apply a little more oomph when all-out brute force isn't necessary, and pairing them with an extension can get the business end down in tight spaces where traditional handles won't fit.

Give It a Lot More Oomph With Reversible Impact Screwdriver

Speaking of brute force, you'll need an impact screwdriver every now and again. The added torque of a ratchet is always great, but there are times where even that won't be enough and you'll end up camming out of the fastener head, sending yourself right up the creek — unless you're Canadian.

Typical situations where impact drivers like the AKM Manual Reversible 12-Piece Impact Driver Set shine are brake jobs. Rotors are generally held in place with retaining screws on modern vehicles. Unfortunately, they see as much road grime as the rest of the system and freeze in place. A quick tap on an impact screwdriver is usually the cure, keeping you from the brink of insanity.

Get an App That Actually Helps With a Smartphone-Assisted Endoscope

The Depstech Wireless Endoscope is another entry that’s seen use on our project cars. It’s attached to a super clumsy, someone suspicious app. It works, though. Ugly or not, that's all that matters. There are plenty of reasons to get an endoscope, and some would argue that buying a real one is better than taking a shortcut like this. If you have room in the toolbox and budget, there’s no reason not to buy a top-of-the-line model.

What makes this a great option is the fact that it links to your smartphone via WiFi connection using your screen as the display. With it, you can peer into tight spaces under the hood, and we've even used it to peep at cylinder walls and to ensure manifolds didn’t swallow any hardware during assembly. When you’re done, you have little more than some wire to put away

Get Right to the Point With a Cable Tracer

This isn't an original thought. It's a tip we picked up from a YouTuber, Briansmobile1, a few years back. These wire tracers are used primarily in the electrical industry as means to trace wires behind walls and locate brakes along the way. Though, they aren't partial to any specialty wiring and can prove useful for diagnostics under the hood.

We should mention that we have experienced equally as many failures as successes in putting these to use. They won't always prove useful, especially not on short circuits tucked behind a dash. Still, they're relatively affordable and worth every penny in the chance that they may help you find a break without having to tear an entire harness apart to fix a single wire. Going with the Klein Tools VDV500-820 Cable Tracer just means you have even fewer potential headaches to deal with.

Pick Up the Pace With the Long-Forgotten Speeder Wrench

Speeder wrenches aren't anything new. In fact, thisSK Hand Tools 40981 1/4-Inch Drive Speeder Handle just might be what you're grandaddy used when he was slapping together that killer Flathead in the glory days. However, enough time has passed for them to fall out of favor in many shops, and a lot of people have no idea what they are.

These handy tools breach the gap between ratcheting socket wrenches and impacts. The continuous rotation of the handle far surpasses the speed of a regular wrench, but it won't blast the hardware down so hard that you have to worry about breaking or stripping things out. To be frank, this is more of an engine builder's tool, but you will find yourself reaching for it in many situations where you need to move a little more quickly than usual.