A Toyota Echo isn’t your typical barn find, but it turned into a solid score. 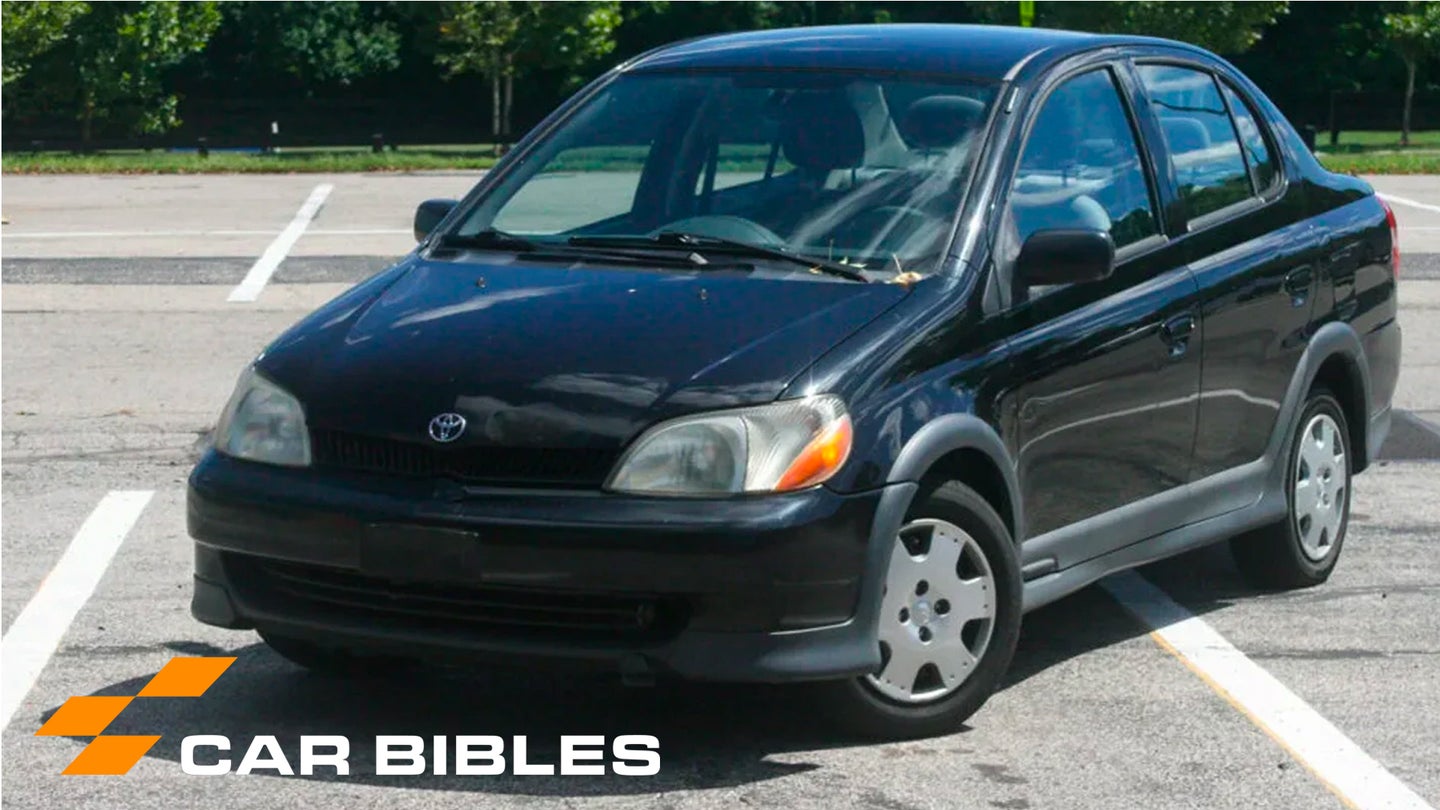 Flipping cars for profit isn't always about turning barn finds into museum pieces you can auction off for huge money. Some barns are hiding humble cars that just need a little love to get rolling again, like the Toyota Echo I found, repaired, and resold for nice grip of cash without having to work too hard.

COVID-19 has destroyed my sleep schedule. To relax, I'd taken a liking towards watching car detail videos—they’re satisfying. I hadn’t flipped a car in more year, the last flip car I'd owned was a 2009 Mazda 6 I bought in July of 2019, and now in September of 2020, I had been itching to buy something else. While browsing Facebook Marketplace in the wee hours of the morning I accidentally clicked “message seller” when I meant to just share the link with a friend. It was a 2000 Toyota Echo with only 131,000 miles and a “seized alternator.” They were asking $800.

I didn’t expect the guy to respond, after all, it was four in the morning. Older people love getting up at the crack of dawn, though. 5:30 a.m. rolls around and I’m still staring at the ceiling—can’t sleep. The man with the Echo replied at 5:31.

“Hi there, I’ve got a lot of interested people but no one has shown up yet. When can ya come out?”

After a bit of back and forth, we agreed to meet at 11:30. Enough time for me to “sleep” then make the hour journey out. My idea was to fix the car on the side of the road then drive it about 50 miles back home to fix it properly.

Chatting with the owner revealed that they bought the Echo new in 1999. It was “the first Echo in Springfield” and it shuttled the man’s wife around central and southern Ohio universities. The woman eventually started buying Priuses, but the Echo was paid off, so they kept it. It went from kid to kid, until the owners realized none of their kids wanted it.

These Echos were sold for model years 2000 through 2005 as a cheaper and smaller option for folks who couldn’t afford or didn’t want something as “big” as a Corolla.

So these people just parked the thing in their barn, where it sat, waiting to be used again. Eventually the alternator locked up and now the car wouldn’t start.

The husband said he was going to fix it eventually, but he became seriously ill. And while “cleaning out the barn” the couple decided to sell the little Echo. They said the car had only been sitting about a year.

Or so they said. The more investigation I did into the car, the more I realized that “parked last year” really must have meant meant “parked five years ago” at least. The tires were dry rotted, and the date revealed that they were from the first Obama administration. The oil change sticker showed that the next oil change was due in November, of 2015. The gas smelled awful; super varnishy.

I don’t think they had meant to mislead me. I eavesdropped on their conversation as they started to realized that their “trip to see their son” was not last year, but actually five years ago.

Still, the car had low miles for its year, virtually no rust, and I felt was worth saving. We agreed to a price of $650.

After removing a belt and cranking for a few mins, the Echo coughed to life. It ran OK, considering the gas was likely five years old and was probably didn't have too much fire left in it. Still, the alternator was seized and I had no way to pull it off on the side of the road, so I opted to get it towed back to my house.

Fixing this car was fairly uneventful. The alternator replacement was straightforward, and I did a carpet extraction to get the musky barn smell out of it. It did misfire for a slight bit until the old fuel worked its way out of the system, but that's to be expected. Even when treated with a stabilizer, gasoline doesn't work too well when it's been sitting for more than 12 months.

Here's how my budget broke down:

The Echo certainly wasn’t perfect when I let it go. The EVAP charcoal canister died, for example. But there are no inspections here in Ohio and it doesn’t affect drivability, so I just let the new owner know and sent the car on its way. This is a $1,700 Toyota, not a new Maybach. Everything important worked, the car tracked straight and didn't vibrate at 80 mph. Yes, an Echo can go 80! Cold A/C, hot heat, and a working stereo made this a solid getaround package for less than two grand.

I feel like the Echo has gotten a lot of hate for some reason. Is it cute? I think so—it’s charmingly ugly, the cartoonish proportions and dinky wheels work well in person. In this black color, with this gray-cladding sports kit, the car looks like a spunky top hat.

The Echo’s three-box design is goofy. It’s not as sensible as the Vitz/Echo hatchback the rest of the world got but the Echo is still very well-packaged, with loads of space for a tiny car.

When you're driving one of these you sit very upright, and the steering wheel is tiny. I like the center-mounted speedometer. It’s one of those things you quickly get used to, and aside from few auto journos who went out of their way to complain about it, I’m not convinced that people who bought Echos cared. It does make for odd night driving, though. The empty darkness right in front of you is a little disconcerting—and I say this as someone who's owned four Yarises which have the same design quirk.

That old Echo’s steering was fairly engaging, which surprised me—the feel and heft were good, and the tiny dimensions and small wheels made the car easy to place on the road.

The suspension design is a pretty generic front MacPherson strut, rear torsion-beam design; ain’t nothing wrong with it. The 1NZFE only made around 108 HP,  and mated to a four-speed automatic, the car won’t win any races, but it’s more adequate than you might think. I did wish it had one extra gear to bring down RPMs at a cruise, though. An Echo screams at 70+ mph on the freeway.

I’ve seen a few articles that have wrongly called the Echo a bad car, I don’t think that’s true at all. Sure, it was a little spartan, base models didn’t even have A/C or power steering, and yeah it was a goofy-looking car. But it was solid and thoughtful; passenger space, economy, and practicality were the foremost concern, which I can appreciate as a lover of practical transportation.

Too bad the new owner smokes. If I'd known that, I wouldn’t have put so much energy into cleaning the interior.

When the first step is to replace an engine, you’re not dealing with a car that’s had an easy life.