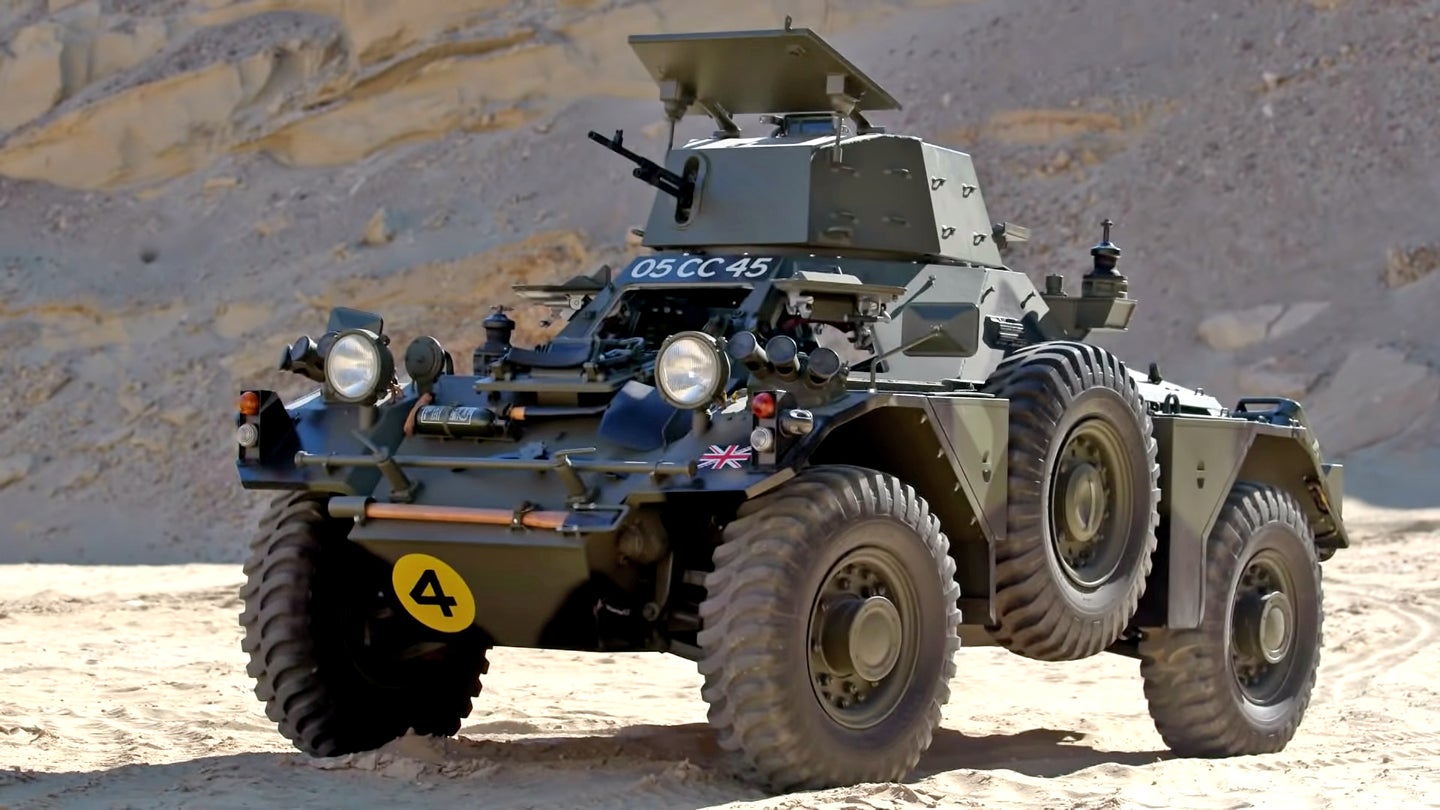 Military vehicle enthusiasts lose their minds if you call anything without treads and a turret a tank. Well, watch out with this one, because even though the Ferret sort of looks like a tank up top—it isn't. It's an armored scout vehicle running on durable solid rubber tires. It was built in Britain by Daimler from 1952 until 1971 and kept in service until 1991 in the United Kingdom. And guess who has one? Jay Leno.

Leno's fine example left the assembly line in 1959, while in total, 4,409 Ferrets were built in just under two decades. Today, these start at around the $20,000 mark in questionable condition, while a good one can set you back by more than double that. Still not a terrible deal for a Rolls-Royce-powered war machine packing such capabilities.

The original Ferret was designed to carry three people, while the Mark 2 became a two-seater as it got upgraded with a turret-mounted a .30" Browning machine gun. Weighing under four tons, the Ferret is powered by a 130-horsepower Rolls-Royce B60 straight-six gasoline engine, which features dry-sump lubrication, and an H-drive four-wheel-drive system that's often used in 6x6 and 8x8 configurations.

Driving the Ferret, you also get a pre-selector five-speed epicyclic gearbox offering five reverse gears as a bonus. The idea was that this fairly lightweight scout vehicle can easily be dropped from transport aircrafts such as Britain's Armstrong-Whitworth AW.660 Argosys, only to then keep a low profile in enemy territory.

During the Second World War, Daimler produced a light and fast four-wheel-drive reconnaissance vehicle called the Dingo. As its successor, the Ferret became larger, tougher with its 16-inch run-flats, and more heavily armed as well, all while retaining a fairly compact footprint.

Popular among collectors for being perfectly suitable for both tarmac roads and a tight urban environment, Leno's 1959 Ferret features several cameras to help him navigate in LA traffic, as the carbureted 4,256cc Rolls engine grants him with around five miles to the gallon. At the end of the day, the Ferret drives like a heavy car, and with this much armor plating, spare tires, and its dependable 4x4 system doing its thing, there's just no land you wouldn't dare to conquer.

Got a tip on how to fire up a neglected military vehicle? Send us a note: tips@thedrive.com