The original Diablo was the darling of the masses, but not of the media members who test-drove it. 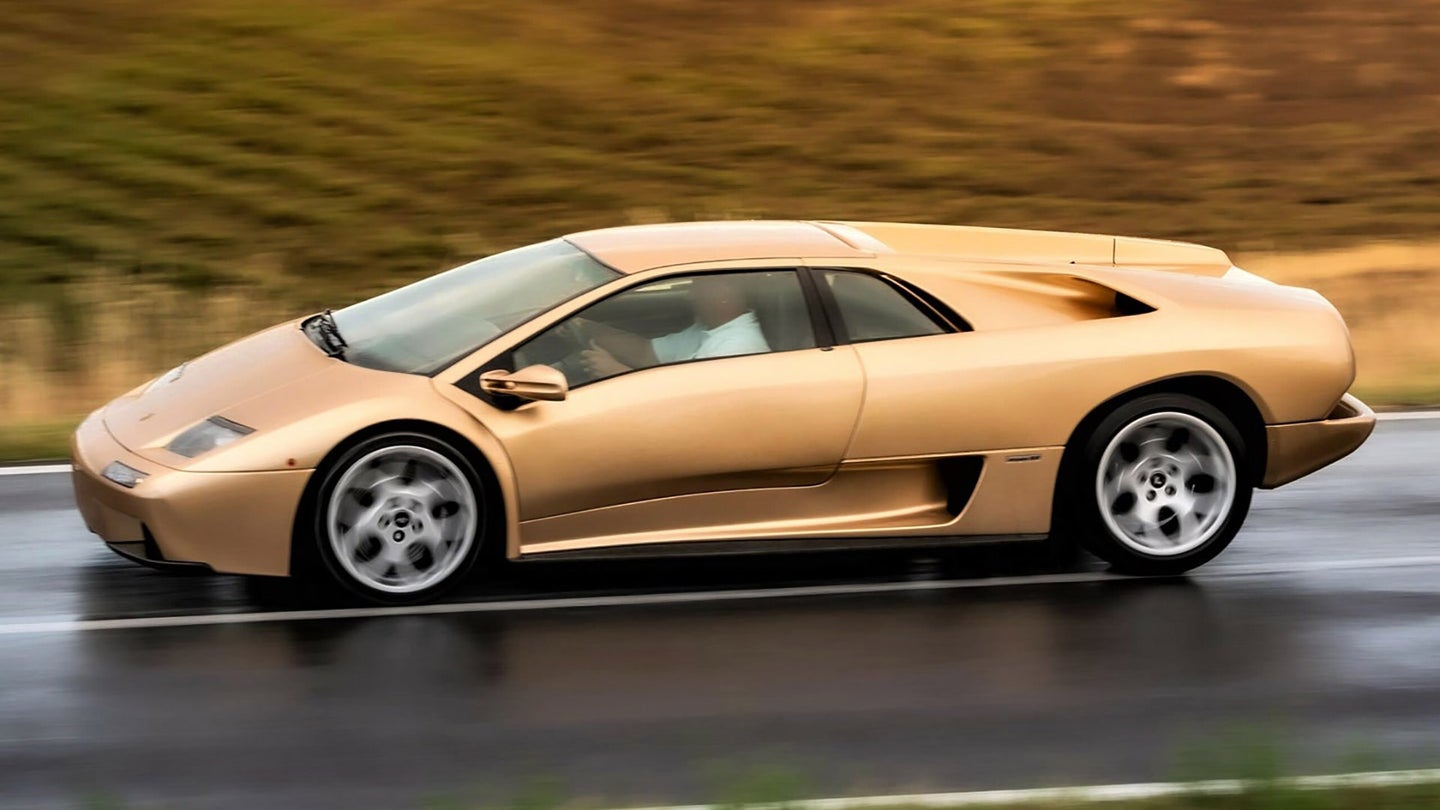 It’s difficult to believe, but the Lamborghini Diablo is 30 years old. (What? So are you? Please refer to this story in Psychology Today.)

The Diablo was introduced in January of 1990, but Lamborghini says its story began in 1985. It was codenamed Project 132, intended to replace the Countach as the Lamborghini flagship. It was penned by Marcello Gandini, whose design was, interestingly, revised by Chrysler's design center, which had become the majority shareholder of Automobili Lamborghini.

It was an immediate hit with the millions of people who could never afford a Lamborghini, but it was not universally beloved by the media members who tested the new car. In a 1992 review, Car and Driver noted that the Diablo, around town, was “clunky and cantankerous as Strom Thurmond,” and that the cockpit was as accommodating as a “Bangkok debtor’s prison.”

The magazine also said the same thing about its arch-enemy, the Ferrari F40. The magazine compared the two and found that the Ferrari, with its turbocharged V-8, was five seconds faster around Palm Beach International Raceway than the 485-horsepower normally aspirated Lamborghini. Understandable: The Lamborghini was the bargain at $272,935 versus the Ferrari’s sticker of $471,375.

Supercars, Lamborghinis included, have come so far since then. The majority work as daily drivers, manage to make it from service interval to service interval (C&D noted at least a dozen things that needed fixing on the ’92 Lamborghini Diablo, which only had 300 miles on the odometer), and the prices are not that far from what they are now, and that’s completely discounting inflation.

By the time the last Lamborghini Diablo arrived as a 2001 model, Diablo drivers, according to the company, were spending triple the amount of time actually driving the car than they were 10 years earlier. Part of that was the influence of Audi, which took over the company in 1999.

Having driven an early Diablo, I’d say Car and Driver was correct. It almost took both feet to operate the clutch, and you needed to keep the pedal down for quite a while since the stubborn gearbox hated to shift. High sills and the massive haunches made you feel as though you were in a submarine, with less ground clearance than a snowmobile.

As with most supercars, you were on display. Cars would box you in straining to take photos, wondering what famous person was driving, and then were invariably disappointed to see it was me. Fuel mileage for the 1992 Diablo was an EPA-rated 9 miles per gallon in the city, so you spent a lot of time at gas pumps, where you were encouraged to present a seminar at each stop for people who always asked, how much? And how fast?

On the highway, the early Diablo behaved itself reasonably well, but everything was difficult: Heavy clutch and steering, balky shifter, touchy accelerator. The fun came in knowing that you were driving a Diablo, not the actual driving itself—something else that has changed with supercars. The fun was knowing that you were in a car that could go 203 mph, assuming no parts fell off en route.

Indeed, Car and Driver’s test of the last Diablo, the 2001 VT 6.0, proclaimed it livable and less troublesome, helpfully noting that its 543 horsepower "was more than four, four-cylinder Camrys,” as if that might occur to someone cross-shopping the two. Things have only gotten better from there. The Lamborghini Aventador, for instance, is a pain only for those with wide hips and bad arthritis.

But none of this addresses the Diablo’s place in history. Shaped like a wedge you’d buy at Harbor Freight, the Diablo’s central accomplishment was cramming a V-12 into a body that looked like it left no room for an engine at all. The jack-knife doors made it that much more exotic, harkening to the Mercedes Gullwingthat preceded it.

The car still looks far fresher than, say, a Ferrari Testarossa, and the last half of the Diablo production lineup can be an invigorating Sunday-afternoon car. Hard to imagine it has been around for 30 years, and I’ve been around a lot longer writing about cars—I almost called the early wheel pattern a “phone-dial,” but realized in time I would need to explain what a phone dial is.

Just a tap of the throttle is all it takes to get the V12 bull sideways…and then some.