In the Belly of the Beast: Auto Service Center Does Business Inside a 56-Year-Old Dinosaur 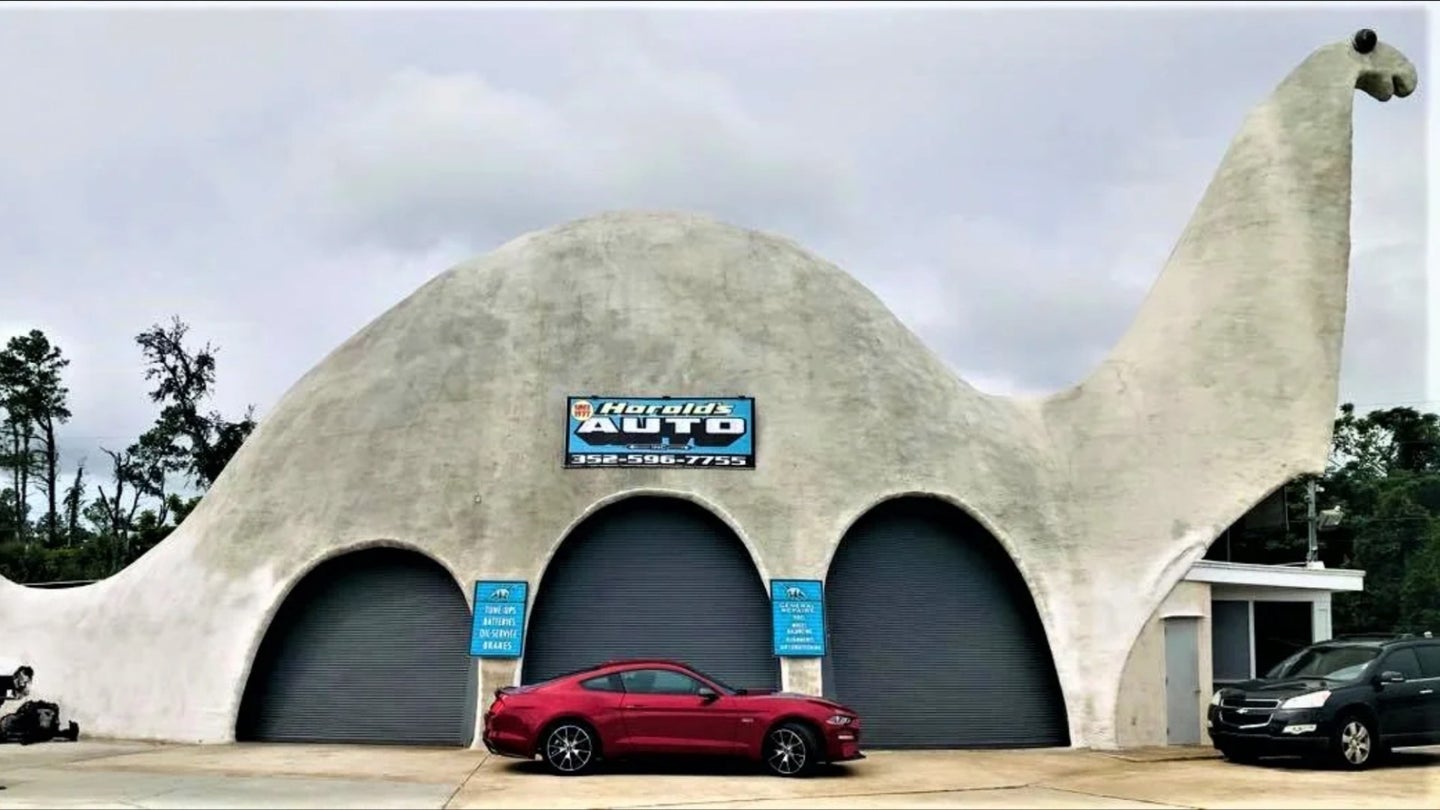 It’s easy to get directions going north on Route 19 in Spring Hill, Florida, to Harold’s Auto Center. You drive past the first dinosaur, then turn left at the second one.

The first dinosaur is painted Pepto Bismol-pink and was built for a long-defunct wildlife center in 1962. It was restored in 1999. It’s 22 feet tall and 58 feet long, and is a cross between a Brontosaurus and a Stegosaurus. (Florida is very specific about its roadside dinosaurs.) A couple miles north, and you can’t miss Harold’s Auto Center. The three-bay garage is built inside a concrete dinosaur that is 110 feet long, 30 feet wide, 34 feet high to its back, and 48 feet to top of its head, which has green and red eyes and a sort-of smile.

It was built in 1964 as a new Sinclair gas station, because Sinclair has long saluted dinosaurs for decomposing and giving us fossil fuels. The gas station closed, but the dinosaur remained, and in April of 1977, it became Harold’s Auto Center.

The dinosaur was first thought to be a Brontosaurus, but Sinclair insists that its mascot since a 1930 ad campaign is an Apatosaurus. Says Sinclair: “The original campaign included a dozen different dinosaurs, but it was the gentle giant, the Apatosaurus, that captured the hearts of Americans.”

The gentle herbivore giant, named Dino by Sinclair, had a huge bullwhip tail that it could flick, scientists say, likely causing a snap-sound equivalent to 200 decibels, much like a cannon. The real Apatosaurus—70 feet long, 90 feet high, weighing in at 38 tons—came and went about 155 million years ago.

Harold’s, though, appears to be doing well. “Although we are inside a Dinosaur,” the company’s website says, “we stay up to date with what your vehicle needs!”

I asked a mechanic how he likes working in the belly of the beast, and he shrugged as if he’s heard that question a hundred times. “Well,” he said, “the kids like it.”

To Keep A 98-Year-Old Volkswagen Repair Shop Thriving, She Fixes Cars And Customers Too

Meet Guinevere Freccia, whose wrenching skills and social media savvy keep a lot of air-cooled VWs on the road—and have spread joy along the way.

It’s made of real clay bricks, and there’s even working lights and a fan inside.