Local tour guide Joe Urie says that caked-on road salt is "like crack" to the moose, who are getting way too close to cars accordingly. 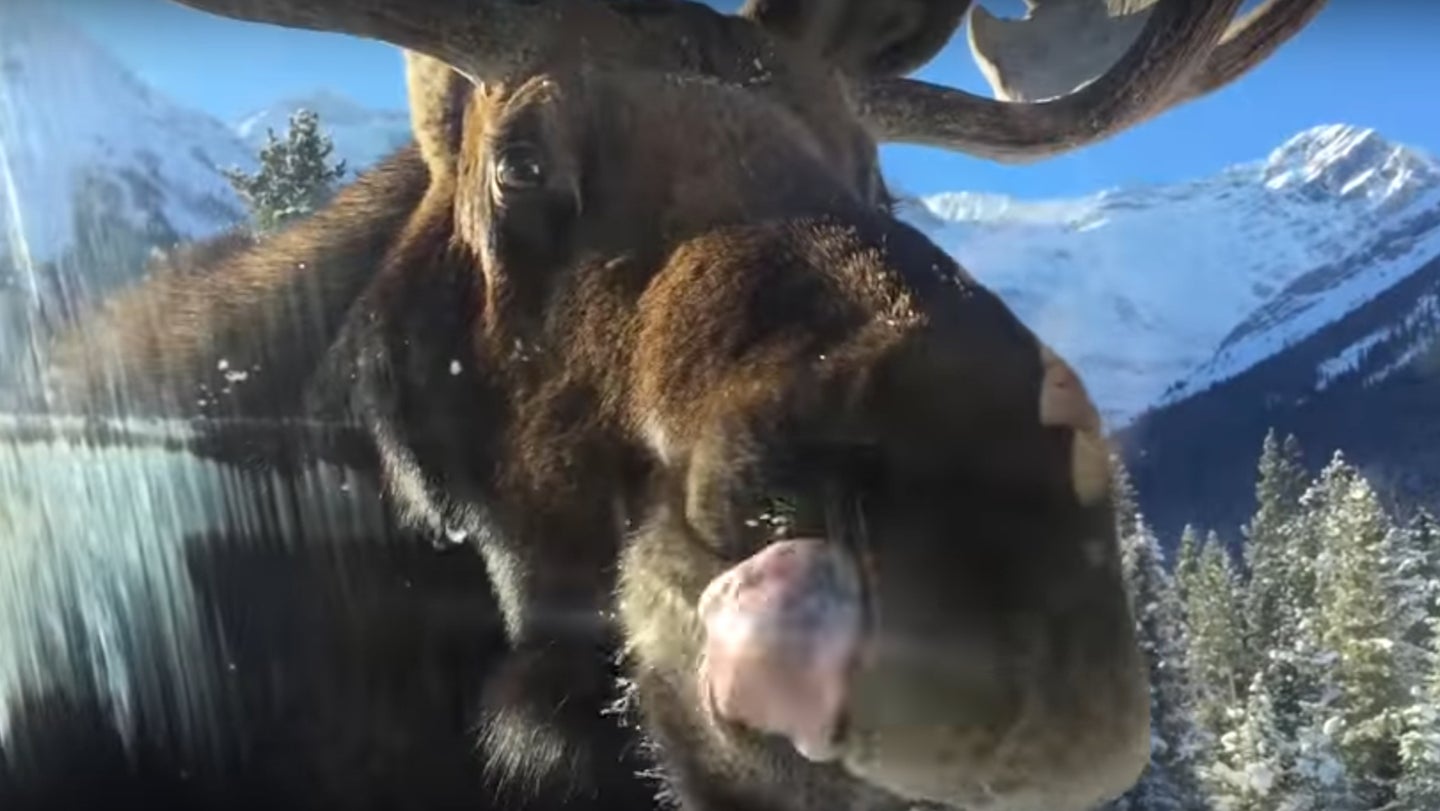 Electronic road signs near Jasper, Alberta, are now warning Canadians not to let moose lick their cars, and no, it's not a prank. Moose are getting way too close to cars to get that tasty, tasty road salt and Parks Canada authorities say it's best not to indulge them.

A new warning sign on Jasper National Park's Maligne Lake Road told motorists in French and English "DO NOT LET MOOSE LICK YOUR CAR." Parks Canada installed the sign there as moose are a frequent sight on the road, with motorists typically encountering a dozen moose between Maligne and Medicine Lakes, reports the Fitzhugh News.

The reason? Road salt. These moose, which typically weigh around 800 lbs but can weigh as much as 1,800 lbs according to Northern Ontario Travel, love to stand or kneel in the middle of the road to lick salt off of the road surface, putting them in harm's way.

They've become rather desensitized to cars, too, even though a vehicle-moose collision is bad news for both parties.

"(This) started as an occasional issue a few years ago and now is too common,” Jasper National Park spokesman Steve Young wrote in an email to the Fitzhugh News. "People are getting far too close, and it’s perpetuated by their (the moose’s) obsession with salt, accessing the vehicles," he continued.

The moose also don't care how much their antlers ding and scratch your car's paint, either. All they care about is that tasty, tasty road salt. They're absolutely mesmerized by the salt.

"I hate to say it, but this road salt is kind of like crack," explains Jasper Tour Company owner Joe Urie to CBC Edmonton. "Let's say you do come to a stop to get your click. If that moose then starts to approach your vehicle, you know what's coming next. Get moving. Don't give the moose the opportunity to do it."

Prior guidance issued by the Alberta government advised drivers to stay 30 meters away from any moose and honk or sound their car alarm when they see one getting close to their car. That same advisory also told motorists not to try and push moose away when out of their car. Agitating an 800-pound behemoth likely won't end well for you.

People are not allowed to get too close to moose in Jasper National Park, anyway. People are required to stay 30 meters away from any moose except when inside a motor vehicle, according to the Fitzhugh News. Feeding, enticing or disturbing wildlife in any of Canada's national parks is punishable by fines of up to $25,000 Canadian.

This isn't just a problem in Canada, though, as Snopes notes that U.S. National Parks officials have issued similar warnings about car-licking moose and bighorn to visitors as well. Lori Iverson of the National Elk Refuge near Jackson Hole, Wyoming, told Buckrail that the danger to wildlife isn't just the proximity to cars—it's also all the chemicals that accumulate on cars and the ability to transmit disease when multiple varmints lick the same tasty F-150:

Though it’s salt the bighorns seek on the surface of vehicles there could also be a whole host of chemicals that could be harmful to ingest—gasoline from an overfilled tank, gas line antifreeze products like Heet, etc. The refuge’s bighorn sheep population, along with many bighorns in the Rocky Mountain West, are vulnerable to pneumonia. Licking shared surfaces may increase the risk of spreading a disease, not unlike a person with a cold offering to share their lollipop with others.