After it moved off the Mustang's chassis, Ford stopped taking the Mercury Cougar seriously. But not everyone else did. 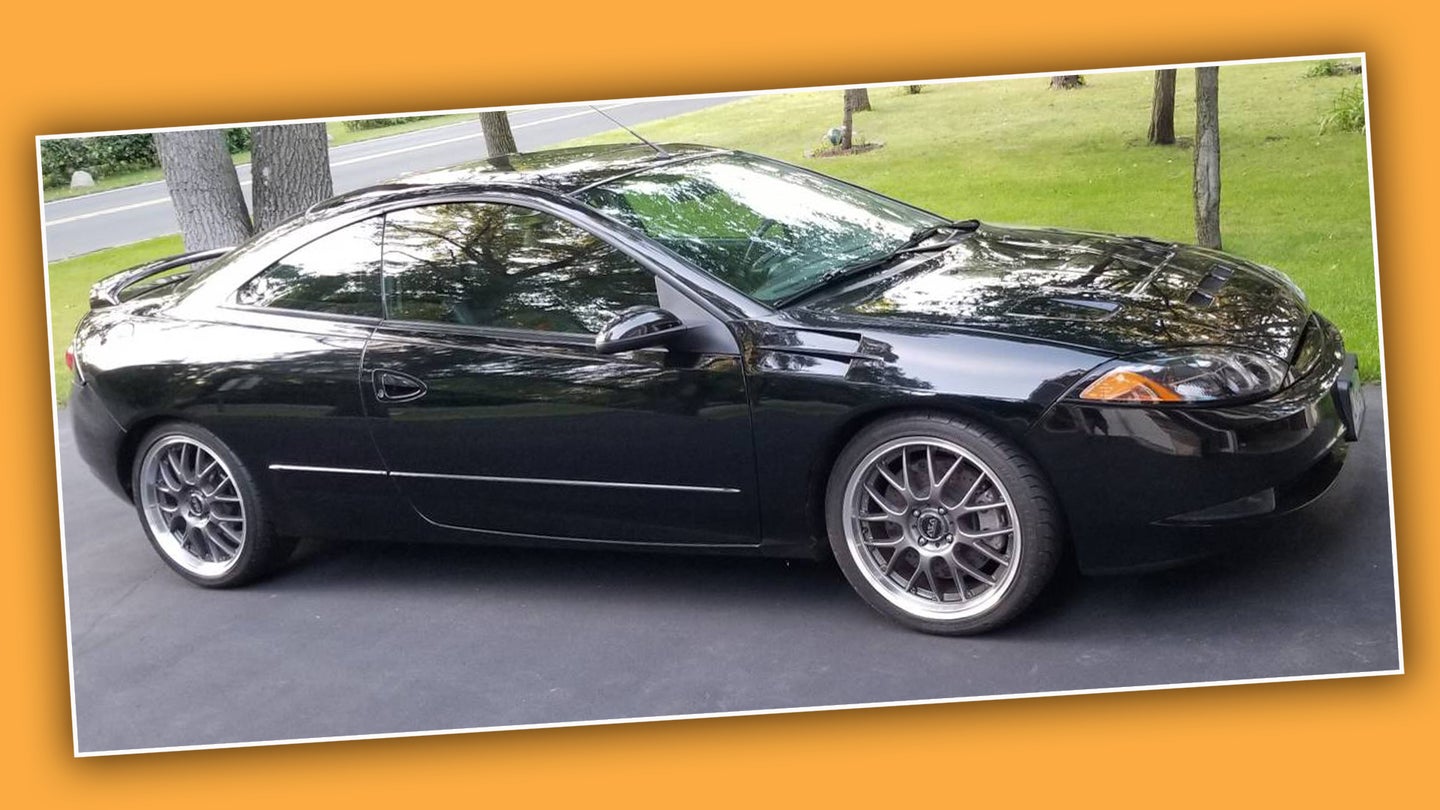 Despite being one of the best-looking front-drive sports coupes of the '90s, the Mercury Cougar never secured a place in people's hearts. It reached the scene as the segment began to lose popularity, and did so without any of the performance parts Ford developed for its platform. It makes one wonder how good Mercury's sporting swan song could have been if Ford had bothered to build it right—ideally, to the same spec as one custom 1999 Cougar currently listed for sale on Craigslist in Minneapolis.

Popping the fiberglass hood on this Cougar reveals an engine bay stuffed with parts from the Contour SVT, which had a higher-performing variant of this Cougar's 2.5-liter V6. Its throttle body, intake manifold, injectors and ECU were worth an extra 25 horsepower on their own in the Contour, and might add more in coordination with this Cougar's stainless steel headers and 2.5-inch exhaust.

Hidden beneath that intake manifold, however, is the biggest upgrade of all: A 3.0-liter Duratec V6 long block, which itself was good for 201 horse and 207 pound-feet of torque from the factory. Accounting for those SVT enhancements, this motor may be making 230 horse, which is nothing earth-shattering, but still stands as a 60-horsepower, all naturally aspirated improvement over stock. A polyurethane-reinforced engine mount ensures more of this power makes it through to the wheels, which it reaches via a five-speed manual and a Quaife mechanical LSD.

Equal attention to detail was directed at the chassis, whose weight and its distribution were enhanced by fiberglass front fenders and the battery's relocation to the trunk. Said trunk houses a rear strut brace from a Ford Mondeo ST200—the Contour SVT's Euro counterpart—and coordinates with an aftermarket brace up front to transfer chassis motion to the adjustable Koni suspension. And because no build is complete without decent brakes, there are Baer units up front, with drilled and slotted rotors.

Tech upgrades to this Cougar's interior are modest, and consist of a Pioneer head unit, a backup camera and gauges to monitor oil pressure and alternator voltage. Black-and-red upholstery sourced from a Cougar XR may look garish today, but a few years from now, we'll be complementing it with whatever term Zoomers come up with for cars too recent for Radwood. (Ed. Note: Apparently it's Litwood? Who knows.)

Because this Cougar's caretaker says they're out of garage space, they're selling their creation for a "negotiable" $3,499. Considering how deliberately this Cougar seems to have been built, its low mileage of barely 101,000 and how good it still looks, that feels like a steal.