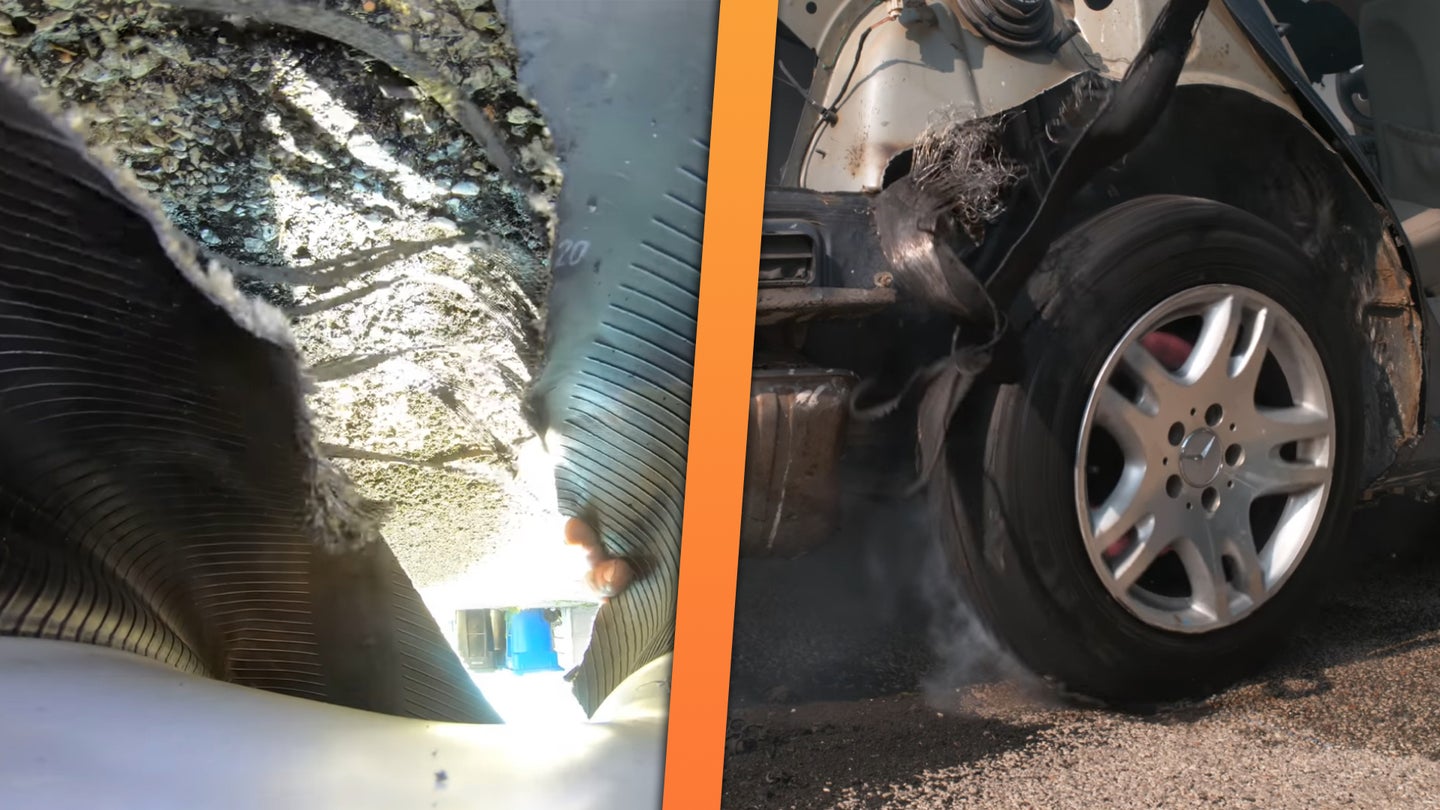 YouTube's Warped Perception produced some of the weirdest automotive footage ever uploaded to the internet when they mounted a GoPro inside a tire and drove around. Now they're back with an explosive sequel, and it's even better than the original.

Burnouts are a simple pleasure. Spin tires fast enough to break traction and make smoke. That's it. That's all of it. But what do they look like from the inside the tire?

To satisfy multiple viewers' requests (including ours) and find out, Warped Perception mounted yet another GoPro to a wheel and then mounted a tire around it. This time, the test car has no body panels at all. It's just the responsible thing to do when you know a tire is going to blow up and you don't want to damage your nicer car. Better yet, it gives us a clear look at the massive cloud of smoke they create for this test and the belts that whip around as the tire gets destroyed.

If you thought the previous in-tire footage was freaky, congratulations. The strange movement of the tire's flat spot against the ground sort of made it look like the rubber tunnel created by the tire was breathing when the tire was being driven around at regular speeds. It looks like it's coughing when it's sped up for a burnout.

After so many coughs, the tread and steel belts start to break loose and whip what's left of the car. Then pop! Fortunately, the second try didn't take the GoPro camera with it and actually gave us a great look at the tire blowing apart. The case blew off of the GoPro, the battery was destroyed and the entire camera setup got extremely hot, but that was all. They got the footage, and that's what mattered.

The first GoPro camera they used for this wasn't so lucky, as it got absolutely blown to smithereens. Its SD card was split in half, and none of that footage was recoverable.

While the in-tire view was cool, I appreciated the slow-mo angles from outside the car as well. Seeing a glowing orange rotor was a good indicator of exactly how hot burnouts really get.

What interesting tire test should would you like to see next? Now that they've given us the most interesting look at a tire's contact patch with the road yet, I'd love to see them take a car out on track for a little sidewall deflection action.

Who even knew you could fit a camera in there?