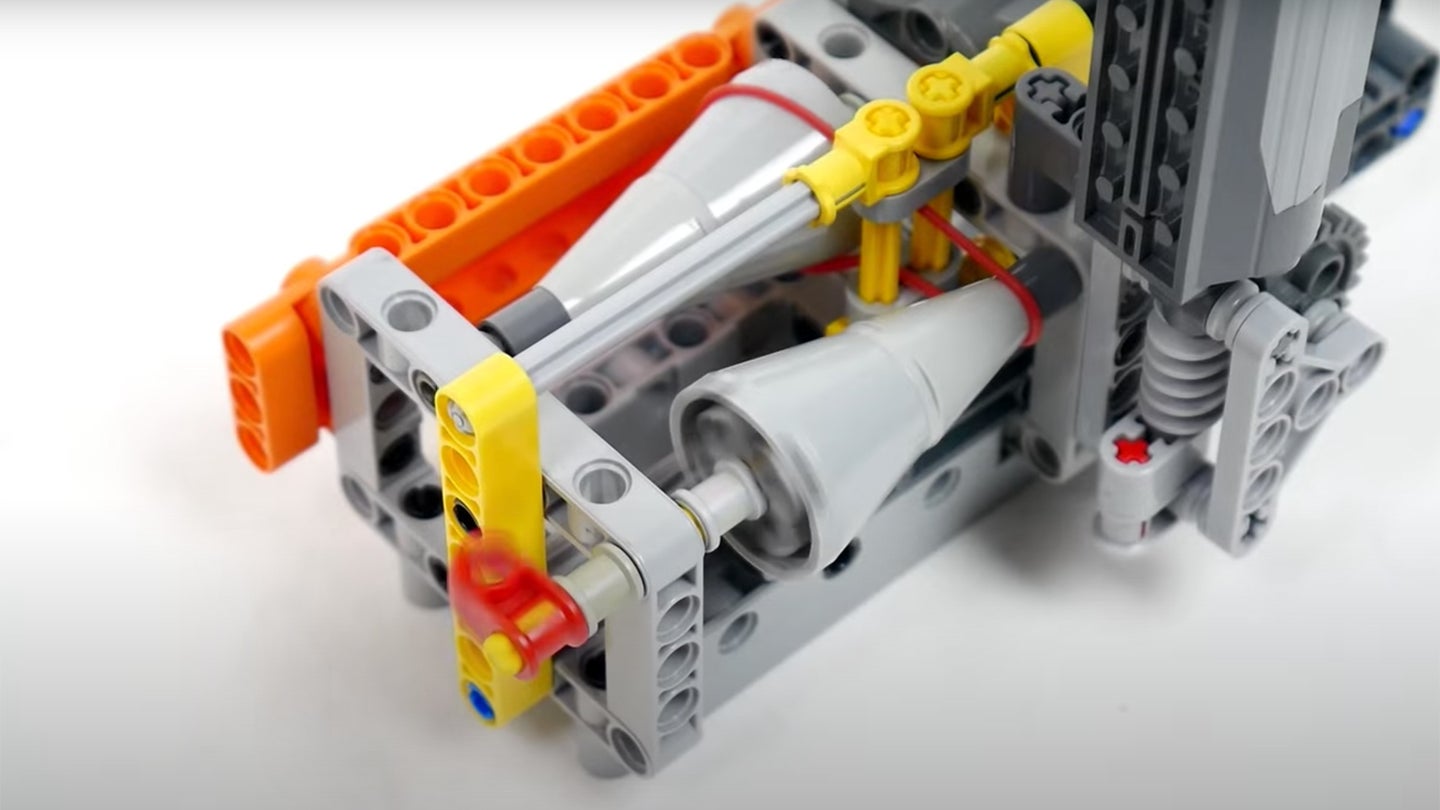 Continuously variable transmissions are among the most subtly divisive pieces of kit the automotive industry has yet assembled. A near-infinite number of gear ratios allows cars to extract a few extra MPG, though often at the cost of poor throttle response, a droning exhaust note, and questionable long-term reliability. Whether the fuel savings are worth those tradeoffs is for you to decide, though one thing's for certain: CVTs are a wicked piece of engineering and worth understanding whether you want one in your car or not.

Put simply, a CVT works by running a metal or rubber band between two pulleys—one being driven by the engine, the other driving the wheels—whose diameters can be adjusted on the fly. Since a true-to-life working transmission is a little too complex for a spare parts Lego project, YouTube channel Sariel's Lego Workshop figured out a surprisingly elegant that still demonstrates the mechanics of a CVT using to opposite-facing cones and an adjustable runner. Check it out below:

Set at the minimum ratio for maximum torque, the engine output cone spins four times to turn the drive cone once. At the opposite end, it turns the drive cone four times with a single revolution. In between are a limitless number of other ratios to adjust power delivery and speed, demonstrated in real time with the help of a test vehicle.

Sariel built this miniature Lego CVT from what appears to be no more than a few dozen pieces, all of them sourced directly from the Lego parts bin—that special rounded rubber band included. Fittingly, Sariel's video highlights one of the CVT's big weaknesses: they can't handle a ton of torque because of their frictive construction. Even in applications with a toothed band and pulleys, all of the engine's power is still being routed through a single point.

This is demonstrated in Sariel's rig as it struggles to climb a ramp with a small bump at the bottom. Even in the lowest "gear", the vehicle still needs a nudge to set off up the incline.

Torque limitations have also kept CVTs out of many heavy-duty vehicles, such as commercial trucks, where reduced fuel consumption could save thousands of dollars on diesel and compressed natural gas annually. The friction required for a CVT's operation, however, tends to make it wear out more quickly than a traditional gear-driven transmission, and to truckers, downtime for service is lost money.

Race teams such as Williams Formula 1 have also fiddled with the CVT as a way to cut lap times, but F1 banned the tech before Williams could race with it. Given what a CVT did to the sound of that revvy 3.5-liter Renault V10, maybe F1 was in the right not to let the CVT find its footing in motorsport.