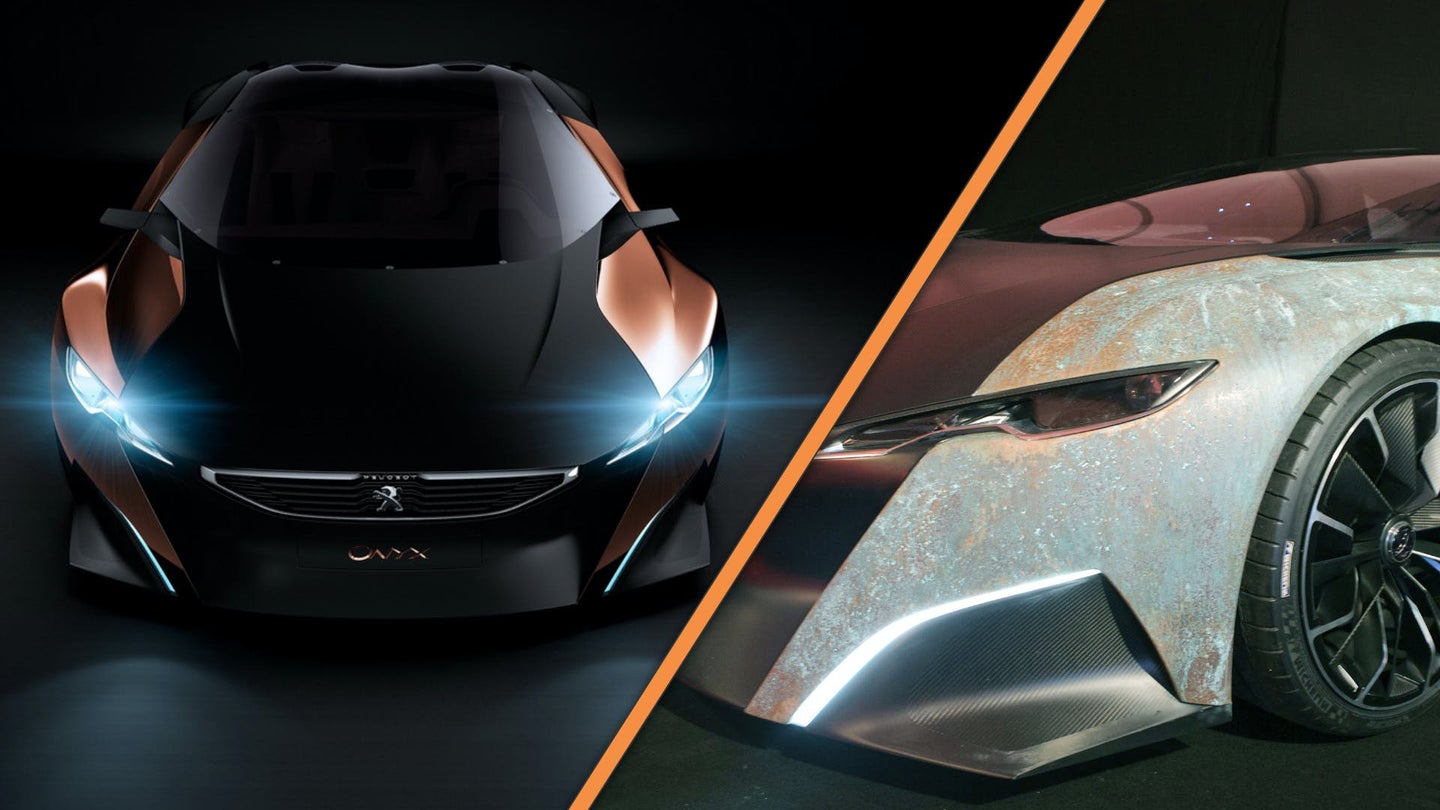 Corrosion is typically seen as a bug, not a feature of automobiles made out of metal. It's never been fashionable to have rusted out fenders, so in 2012 Peugeot went about trying to make corrosion less disappointing and more interesting. It got its designers together, added an electric motor to the V8 diesel engine from their successful 908 Le Mans racer and set to work. The concept would eventually take shape as the Onyx, a fully functional, copper-bodied hybrid supercar.

The Onyx wasn't developed solely to make corrosion more fashionable, having been created in a similar vein to the BMW i8—building a more eco-friendly performance car for future generations. Because of this concern, the vehicle was as green (no pun intended) as possible inside and out. The copper exterior panels are the most striking part, so we'll begin there.

The Onyx's copper body panels were hand-formed by a master artisan from a single, thin sheet of very pure copper. It's in sharp contrast to the rest of the car's matte black body, which is carbon fiber underneath the paint. The image above on the left—where the copper is at a mirror finish—was taken in September of 2012. The image on the right was taken fifteen months later, in January of 2014. As you can see, the weather has certainly had its way with the car's copper body. It's not quite as green as the Statue of Liberty, but I'm sure it's getting closer to that point these days. If it's still around.

The vehicle's interior is just as interesting as its exterior, with eco-friendly materials used throughout. The seat's upholstery—if you can call the indentations in the Onyx's floor seats—is made out of recycled felt. The wood-like material making up the rigid structures in the interior is actually compressed newspapers, likely mixed with a small amount of resin to bind it together and seal it from liquids. Anything of a structural nature is carbon fiber.

Since the Onyx is a working concept, it has all of the components necessary to make a car, uhm... go. The engine, as mentioned before, is taken from Peugeot's successful 908 Le Mans race car, as is the transmission. In addition to the 600 horsepower, 3.7-liter turbodiesel V8, the Onyx also has an 80 horsepower electric motor. Juice for the motor is gathered during braking and stored in a lithium-ion battery. All of this Power is sent through a 6-speed sequential gearbox to the rear wheels, where the rubber meets the road through two 345mm-wide rear tires.

The Onyx is light as well, despite its heavy copper bodywork. The rest of the car is made almost entirely from carbon fiber, including the double-wishbone suspension. This gives it a curb weight of just 2,425 pounds and a power-to-weight ratio on par with the Bugatti Veyron.

The Onyx may have been a concept, but it was also a functional race car. Peugeot says it could hit sixty in 2.9 seconds and reach an impressive top speed of 223 mph. The aerodynamics were impressive as well, with an active rear wing and a flat floor to generate ground-effect suction. Stopping the car was massive carbon ceramic brakes at every corner. According to Top Gear magazine—who also drove the Onyx—it was tested around the Nogaro circuit, in southwestern France.

It's unclear where the car is located today, but there are several videos of it online, including one taken at Circuit Paul Ricard. And while you may not be able to purchase the Onyx concept, you can buy a pepper mill also made by Peugeot, also called 'Onyx' if it's any consolation. Peugeot has been making pepper mills since 1874, so it's likely even better sorted out than their cars. It's electric, has one five star review, and probably makes a lovely gift for French car nerds.

Correction: Thursday, June 4, 8:56 pm ET: A previous version of this story stated that the Peugeot Onyx may have been crushed. That is not the case, per Peugeot's design director on Instagram.