Grab your JanSports and charge up your Tamagotchi—we're going back to the Nineties. 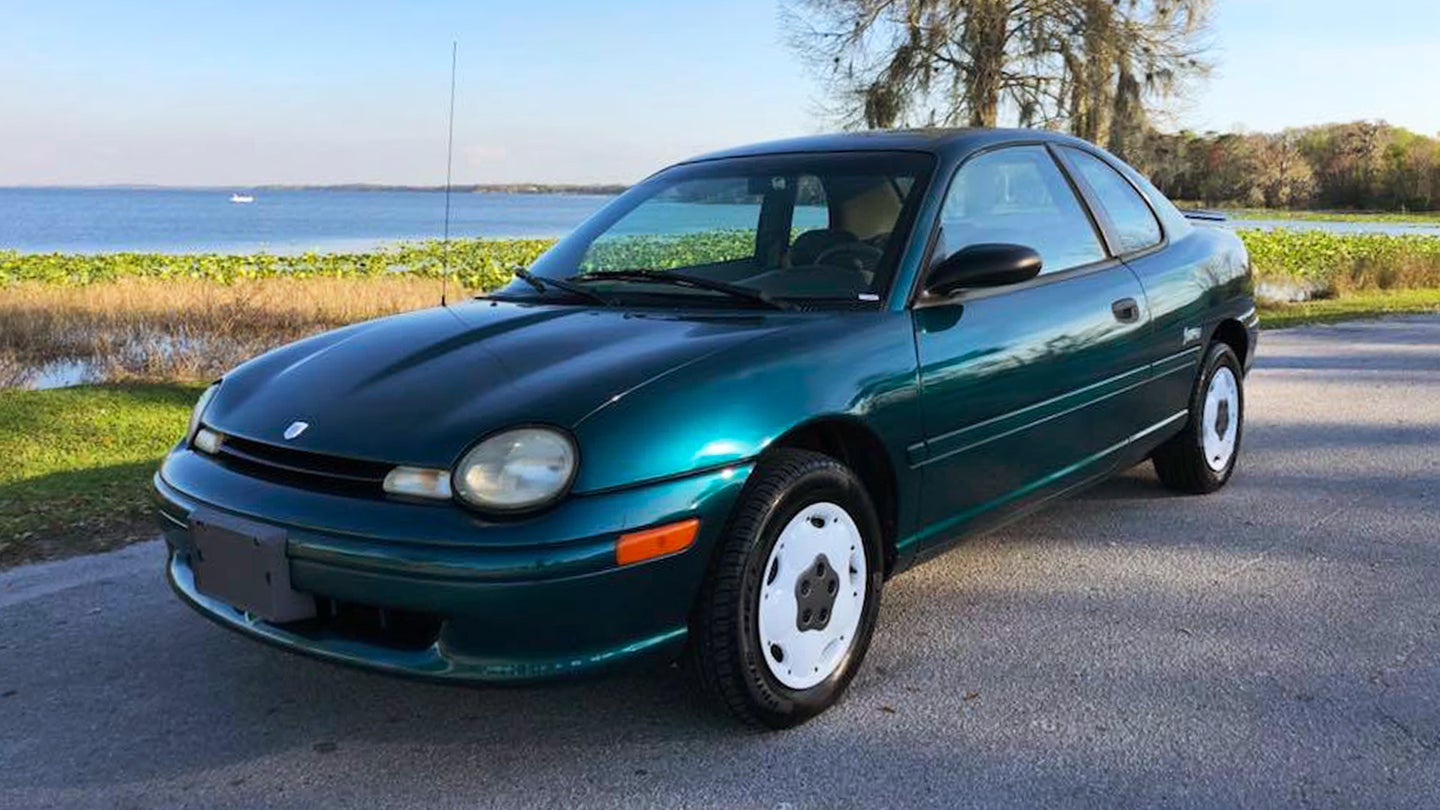 The Plymouth Neon is the Rodney Dangerfield of compact cars—it don't get no respect. But that didn't stop one extremely conscientious owner in Florida from babying theirs for two decades, resulting in a time capsule so outrageously Nineties that all it needs is a cassette of Bitter Sweet Symphony to complete the effect. Buy it, drive it, or throw it in a museum. The choice is yours.

Born of the late 20th century laissez-faire approach that defined American car manufacturing at the time, the Plymouth Neon (also sold under the Dodge and Chrysler banners) was not actually that bad of a car. With an available dual overhead cam 2.0-liter engine putting out 150 horsepower, its performance specs surpassed contemporary rivals like the Honda Civic and Toyota Corolla, and the Neon was (and still is, to some degree) surprisingly competitive in autocross and other amateur racing series.

Of course, it's mainly remembered today as a cut-rate, front-wheel-drive compact that hails from an earlier era when things like a three-speed automatic transmission were still acceptable to buyers—that is, when it's remembered at all. But if you were around in the 1990s, you'll recall that these things were everywhere for a while. But time has not been kind to the Neon, and these days an example that looks as good as this is rarer than hen's teeth.

On the outside, the Emerald Green Pearl Metallic body on this one-owner Neon Expresso coupe looks to be entirely free of even the smallest scratches or blemishes. The most impressive part is how fresh the plastic wheel covers look, and combined with the new tires, the shiny wheels really add to the showroom effect.

Inside, it's much the same. The interior is freshly preserved in all its molded-plastic glory; our favorite bit is the jazzy triangle pattern on the seats, which would probably be the most Nineties thing about this car were it not for the giant "EXPRESSO" badge on the outside. But some design details have aged better than others, even when you factor in the nostalgia curve. The plain, awkward look of the steering wheel in particular sticks out like a sore thumb.

Under the hood of this example lies Chrysler's 2.0-liter DOHC engine, a peppy little unit with only 58,000 miles on it. The listing states that it runs like a top, and the guys at Hill Valley Garage, the dealership selling the Neon, confirmed that it drives like a totally brand new car. "You cannot tell it's a 22-year-old car," an employee told us.

The cost of this nostalgia trip? A mere $2,400, which is a small price to pay for both time travel and an economical car that probably has a lot of life left in it. You might roll your eyes at the name "Neon," but consider that a Corolla or Civic of the same vintage and condition would easily command the same money—if not a little more. Besides, you could always earn back the purchase price by renting it out to the next wave of Nineties-themed movies and TV shows.