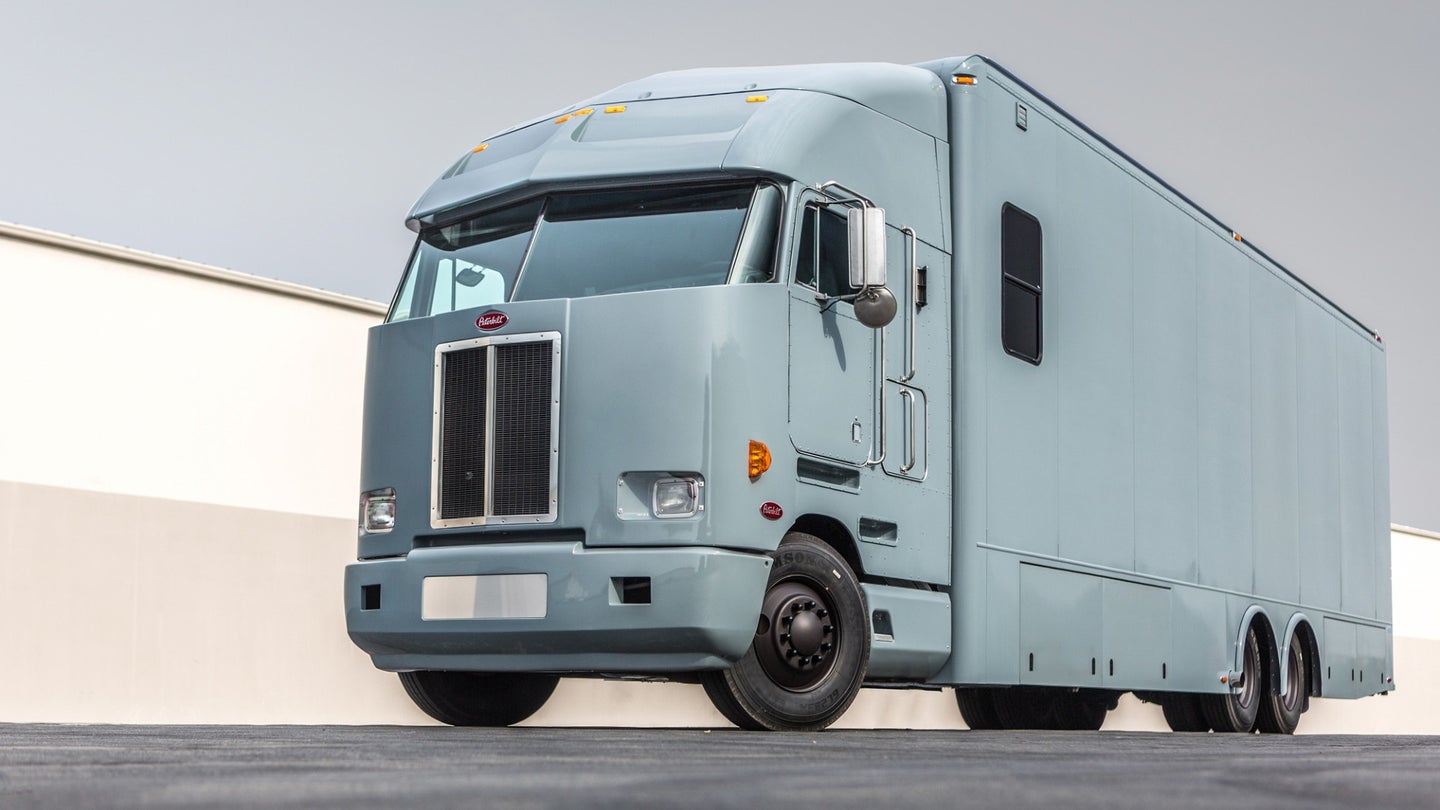 I know not everyone is interested in dump trucks the same way I am, and you may have never given a Peterbilt semi more than a passing glance before today. But, if you're going to pay attention to one big rig for sale anytime soon, let it be this Canepa-designed car hauler that not only features a luxurious four-vehicle trailer but also an aerodynamic body meant to help with both speed and efficiency. It's a 1992 Peterbilt 372, powered by a 12.7-liter Detroit diesel engine.

Bruce Canepa, famed racer-turned-restorer, had a longtime partnership with Peterbilt as well as Motorcoach Industries that brought about some magnificent large vehicles. This one was finished in 2017 and while it's still in stellar shape, it's been put to use—the odometer reads 845,774 miles. Now, that's not really that many for a semi, but nonetheless, this Pete wasn't built then parked like some other custom builds. The listing mentions that it's made the yearly trek to Laguna Seca for the Rolex Motorsports Reunion, as well as other select events.

Canepa's company, Concept Transporters, started with a Peterbilt 372 cabover and then stretched the truck's frame to accommodate the transporter body. The design was made a reality with rivetless aluminum panels, giving it European flair and a futuristic feel. Finally, the Peterbilt and its even more custom trailer were coated in Basalt Blue—a classy touch on a classy rig.

Inside the trailer, you'll find an exceptionally versatile layout that's meant to hold a maximum of four cars. Of course, that's not all there's room for. The parking decks are height-adjustable, making way for vehicles of all shapes and sizes. Then, hidden away is a secluded, zippable lounge area that's key for decompressing during a busy race weekend. Every room in the trailer has hardwood flooring and vibrant lighting, making it look more like a top-notch showroom than a weekend beater.

A 12.7-liter Detroit 60C engine sends power to a nine-speed manual gearbox, which deploys power to the rear wheels. No power numbers are mentioned, but the lightweight aluminum bodywork helps to cut down on total mass, meaning this Peterbilt is relatively fast. Additionally, since it's a 1992 model, it's still kosher to make mechanical alterations for more power...within reason, of course. A dirty diesel is a bad diesel, just ask Gale Banks.

There's no price listed, so you'll have to call if you want to know Canepa's bottom dollar. It most certainly won't be cheap, but then again, something this bespoke and luxurious was never a budget build in the first place.