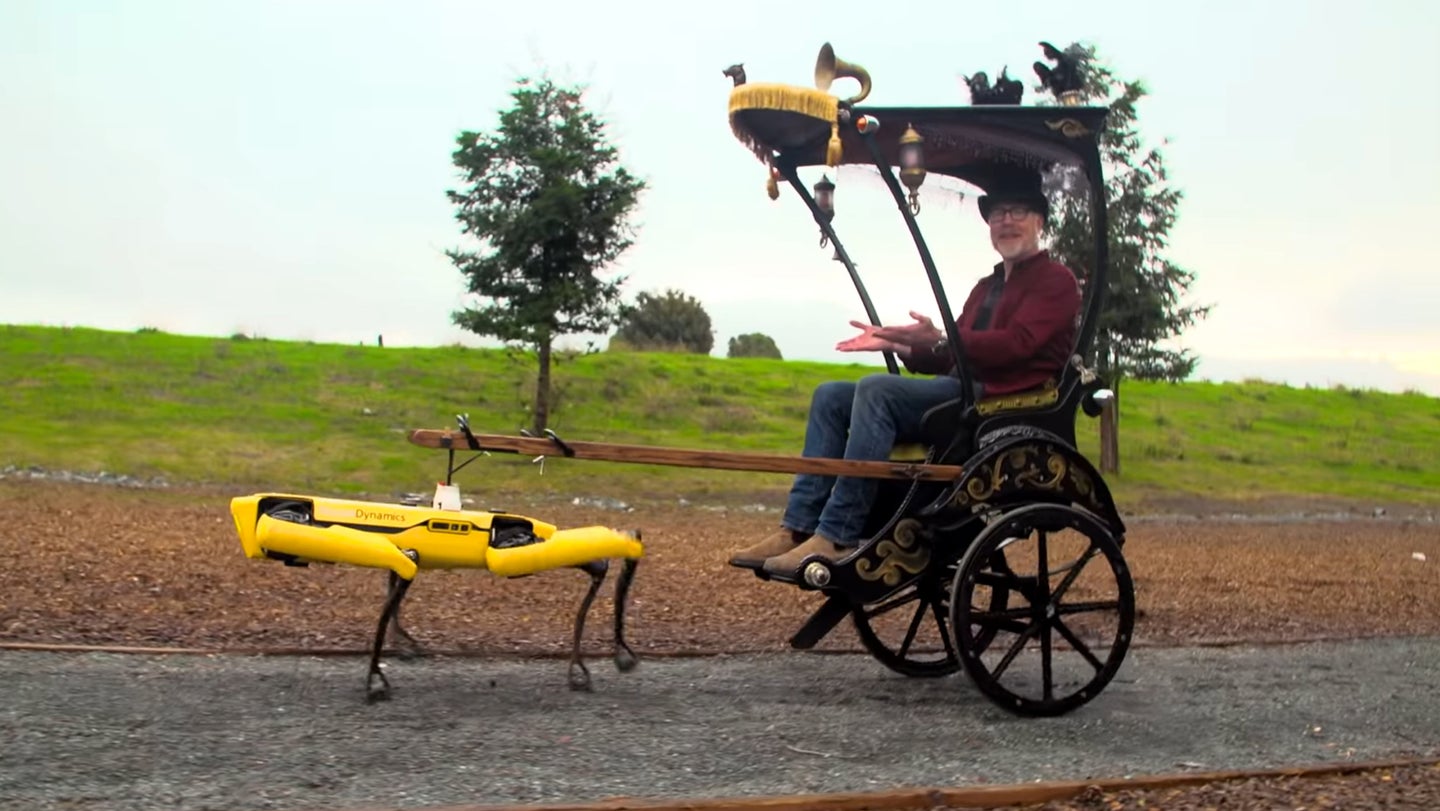 Boston Dynamics' weirdly humanoid robots are usually the stuff of nightmares. Is this how Terminators got their start? Are these strange hopping, self-balancing, go-anywhere bots going to eventually gain sentience and obliterate humanity?

There's one walking Boston Dynamics bot that may elicit a cautious "aww" instead of an "AAAAAAAHHHHHHH NOOOOOOO" as a reaction: Spot. Spot looks a lot like man's best friend, making it the perfect ambassador to ease humanity into the idea of willingly being subjugated by robots. It's just so adorable!

Mythbusters' Adam Savage is spending a year with Spot to learn from the robot's capabilities as part of Tested's web series. Spot still fumbles and bumbles around based on Savage's remote-control inputs. These cute little stumbles may be to throw off any concerns that it and its robot buds are gunning for world domination, but let's not get ahead of ourselves here. Who's a good puppers?

Savage's first major project with Spot was born out of Savage's love of early vehicle design: a rickshaw.

To get the robo-dog to tow the rickshaw and turn with it, Savage roped in Boston Dynamics Field Applications Lead Seth Davis. Spot's payload wasn't enough for Savage to ride, but the long levers at the front of the rickshaw lightened the downward forces of Savage's sitting butt enough for Spot to manage. That was all taken into account before the test, as Spot's settings can be optimized for the different weights it hauls.

Another challenge was getting Spot to turn underneath the front of the rickshaw, which involved installing a truck-like hitch ball on Spot's back. Savage uses a big block of Delrin—a polymer often used for high-performance bushings on cars—to prevent the hitch-ball from falling too far over in a way that would impede Spot's turning abilities.

Maybe we shouldn't be worried about the impending robot destruction of the world as we know it given the amount of work Savage has to do just to get Spot to tow a rickshaw. Davis still has to control Spot off-screen for the rickshaw test, at first with the usual remote, but later through a laptop that allows Spot to adjust itself in relation to the changing forces pulling on him as it navigates hills on the test course.

Or maybe this is one twee plot to convince us all to let our guard down. Davis points out that Spot has an autonomous mode after all. Remember how unsettling the small army of Spots towing a box truck was? We'll see if Spot and its robot buddies revolt from their remote controls when we're chucking Molotov cocktails at Terminators in our front yards, I guess.