October Car Sales Roundup: Making Up for a Bad September

In traditional Halloween spirit, October brought treats for some automakers and tricks for others. 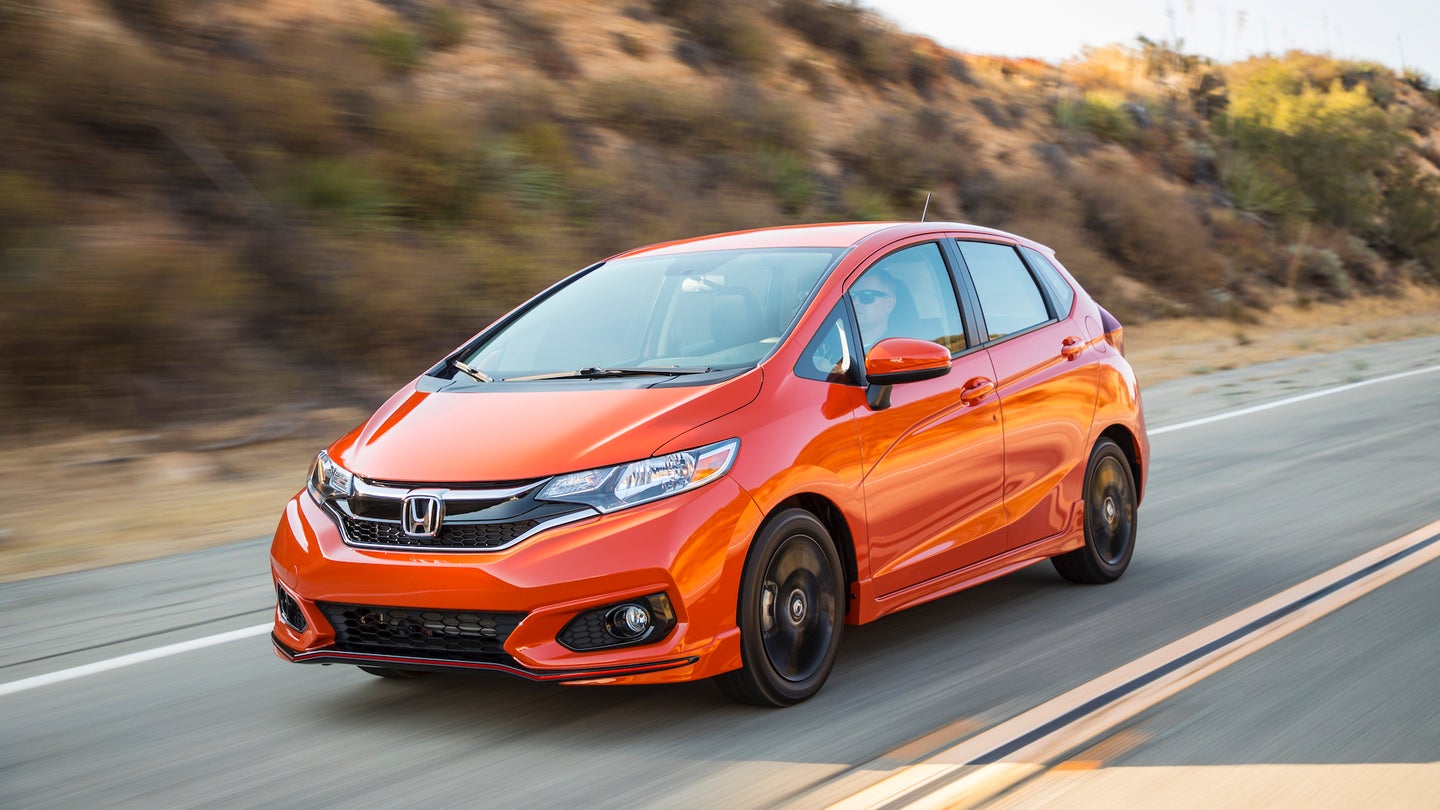 September wasn't a good month for anyone, the UAW was beginning its strike against General Motors, the month had fewer selling days, and things were pretty bleak overall. However, October was good for many automakers, showing the kind of promise that industry analysts love to hear as we cruise into the final months of the year.

The biggest takeaway? SUVs and crossovers are growing, but they're not alone. Small cars with affordable price tags like the Mitsubishi Mirage and the Hyundai Accent had strong sales in October. It appears that the number of people wanting basic and safe transportation that doesn't break the bank is growing. Who would've thought? With average transaction prices rising across the industry, it's these small cars that seem to fill that void.

These manufacturers report quarterly, so read last month's sales reporting data to see where they are and how they are doing. Luckily for GM, the 40-day UAW strike is now in their rearview mirror and everyone can get back to work.

Toyota starts our list of companies reporting monthly with October (much like September) being no so great for the Japanese automaker. The 188,787 sales represented a decline of 4.9% of October of 2018.

A bright spot in the Lexus charts includes the GX SUV up 11.6% and the RX up 7.7%. The RX is new, but surprisingly the 4Runner-based GX is still growing in sales despite its old age.

Toyota trucks were down 6% compared to October 2018. Toyota saw an uptick in Corolla and Prius sales and a solid 10.3% increase in RAV4 sales. The expensive, luxurious and reliable Land Cruiser also increased sales by 15.2%. Yes, that's only 418 total units sold for October, but perhaps more people are interested now that the Land Cruiser is going away?

Honda had an October to be proud of, with both cars and SUVs performing well. Starting with Acura and its MDX sales, which were up 10.4%. According to Honda, that helped Acura set an October light trucks sales record. On the sedan side, the ILX also saw significant gains, up 35.4%.

The recently-revised Honda HR-V set a new all-time monthly record in October, up 104% on a strong sales month of 10,130 units. Honda also had great CR-V sales by 20%, setting another October sales record for Honda and Acura.

Honda cars performed well, especially the much-loved Fit. The Fit was up 204% in the month of October. It's also noteworthy to point out that the Ridgeline, the company's midsized pickup truck, was up 5.8% in October.

This month's sales prove that people are still demanding products from the Japanese automaker, both in cars, SUVs, and crossovers.

Both Nissan and Infiniti sales were down in October. We learned recently that most of the Infiniti lineup is receiving updated infotainment as part of the 2020 model year changes, which includes support for both Android Auto and Apple CarPlay.

The Nissan Kicks had a good month, up 3% compared to October 2018. The Pathfinder, Armada and Murano also saw gains of 8.5%, 31% and 30.3%, respectively. September Frontier sales were down a decent amount but they quickly rebounded for October with 8,031 units sold. That's an improvement of 27.4% over last October and helps with closing the gap a bit from the 2018 sales.

Nissan sold one Juke last month, which is odd, and the company sold 25 GT-Rs, which was an increase of 25% over last October.

There has been a considerable amount of fluctuation at Nissan in month-to-month sales, so it's probably wiser to look at longer-term trends. The company is still down 7% for the year compared to 2018 totals, which is becoming a bigger gap to close before the end of 2019.

Things are going swell at Subaru. The company had another record sales month in October, spearheaded by strong Forester sales. It was the 75th consecutive month that Subaru sold more than 10,000 Foresters (15,901 in this case) and is up 6.6% on the year.

Speaking of consecutive months over 10,000, the Outback passed 68 months in October with 11,506 sales. The Crosstrek, at 12,137 sold, had its best month ever. The big Ascent had its best October ever in sales.

The biggest percentage losses come in the high-performance cars. The WRX and STI were down 38.1% and the BRZ was down 55.9% in October. Both are also down for the year. At least the brand is continuing to make the fun cars, even if Subaru buying preferences are for the SUVs and crossovers.

Hyundai had a strong SUV month, setting an all-time October record for that division. SUVs were up 36% from this time last year. The Kona was up 27% and the Santa Fe was up 42%. Hyundai also confirmed that its mix of SUVs versus cars has changed, with 56% of total sales in October being SUVs this year compared to 45% last year.

Sonata sales dipped a bit last month and are down for the year, but it'll be interesting to see if the bold new Sonata that's coming will draw people back into it. It's something that truly doesn't look like any other sedan on the road today.

Kia enjoyed a successful month, moving approximately 5,000 more units than it did in October of 2018. Unsurprisingly, the Sportage and Sorento were both up. The cars all had a bit of a dip but the K900 held completely flat to October of 2018 (granted, that's only 17 units). Sedona sales were up and the Telluride had a strong month with 6,075 units sold.

Much like Hyundai, more people are going to Kia SUVs than their cars. The Telluride itself seems to help offset some of the losses shown in the sedans. Stinger sales were close to flat, though the number of Stinger sales is down for the year. Last year at this time the company had sold 14,344 of them. This year they're only at 11,770. Has demand for the grand tourer peaked?

Volkswagen was down 3.2% in October of 2019 over the previous October, but it's still trending upwards for the year. The e-Golf had another incredible month with 637 units sold. That represents a 927% increase and is likely the result of Volkswagen only carrying over the GTI and Golf R in the near future in the United States.

The Atlas was up 41-percent and the Tiguan was also up. It appears that those couple of gains, combined with the fire sale on the e-Golf and Golf R seem to be what's holding up the gains.

Interestingly, VW found one Touareg to sell last month along with two CC sedans, even though both have been out of production for a long time now.

The Mini lineup saw a decline overall, with the exception of the Mini Clubman and Countryman, which were up 19.7% and 9.9% respectively.

Strong sales of the X5 seem to counter the loss in 5 Series' sales, which were down 23.9% last month. While the 5 Series is a good and popular sedan, the X5 seems to be winning the battle in midsize vehicles.

The theme of people preferring crossovers over cars continues with Mazda. Its car sales were down 22% for October, while light truck sales increased 18.7% over the same period last year. The Mazda3, Mazda6 and Miata were all down, while the CX-3, CX-5 and CX-9 are growing. Plus, there's a new CX-30 EV on the way.

Overall, however, it's a slower year for Mazda. Its light trucks are down 3.2% for the year and cars are down 23.1%. Great new products like the great Mazda3 are out there, but customers don't seem to be snatching them in a hurry.

Mercedes-Benz is having nearly an identical year as last year, with solid sales results spearheaded by gains with the AMG GT, the GLA, GLC, GLE, and the GLS. So basically, all of its crossovers and SUVs.

The G-Class, however, was down 58.6%, along with most of the cars. The AMG GT seems to be the exception to the rule, and while 361 units isn't a great deal in the grand scheme of things, it is a lot of cars considering the vehicle's starting price and target customer.

It also seems that people are interested in cars that are getting discontinued, much like the VW e-Golf. For Audi it's the TT, as sales were up 170% last month. The biggest sedan dip is also one of the oldest sedans in their lineup, the A3. The rest of the cars fell a bit. The A6 and A7 gains are a result of new models.

Volvo is having a good year. October 2019 was the company's best October in 15 years. It is also up for the year by over 6%, which is a solid gain. The XC90 continues to reign supreme at Volvo, up 18.2% over 2018. The XC60 was the second most popular vehicle in the lineup, followed by the S60 sedan.

Mitsubishi is heading towards the seventh year of consecutive growth and 2019 is still the company's best year since 2007. The small Mitsubishi Mirage, like the Hyundai Accent, was up this year 23.4% over October of last year and 10.8%  year-to-date. While much of this sales reporting shows people wanting crossovers, there's still demand for inexpensive cars with warranties.

While the year is going well for Mitsubishi, the only vehicle that saw gains last month over October 2018 was the Mirage.

There's something to be said about Mitsubishi's year. As transaction prices soar, there are people out there who might be left in the cold by other automakers' high prices. Ford dropped cars altogether, General Motors is quickly running out of inexpensive options, and the Korean and Japanese automakers appear to be capitalizing on that market. These new small cars are better than they've ever been, come with a warranty, and are genuinely affordable for lots of people.

Porsche is having good year, capped off by an October that saw a sales increase of 13.1%. The Porsche 911 saw some of the biggest gains, up 65% from last year at this time. The Macan was up 19.2%. The Macan was recently refreshed, and the 911 is all-new with the 992 generation of the iconic sports car.

Sales of the 911 are likely to continue to increase as the company rolls out more and more variants of the model. Sales will also likely increase on the news that the manual transmission is finally available in the 992. As it rolls that out, more people will likely walk into their local dealerships.