A “spartan” aesthetic plus an Emory-Rothsport Outlaw-4 equals we’re too poor. 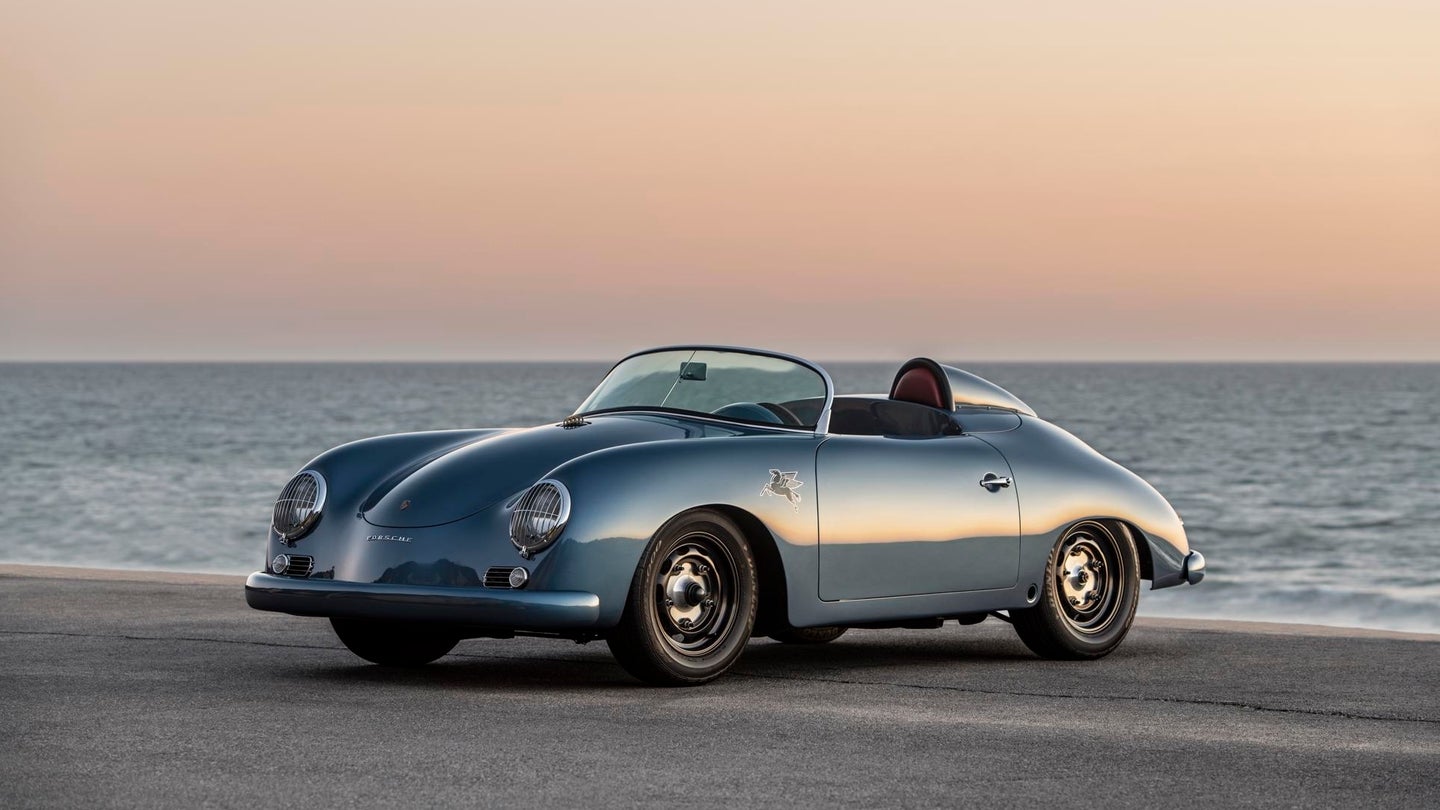 In the world according to Rod Emory of Emory Motorsports, no detail is too small. Each aspect is sweated and every panel on his legendary Outlaw Porsches is beaten and shaped by hand. The consideration given is Germanic in its execution, with the master craftsman’s latest work, the Emory Motorsports’ 1959 ½ Speedster, being one of the best examples he’s ever produced.

Like many of Emory’s other builds, this car started its rehaul as a non-running 356. Originally a coupe, the roof had been “seriously compromised” from a previous accident and was destined for the junkyard before Emory’s crew took it into the company’s North Hollywood shop. Due to the roof being DOA, Rod saw the car as a blank canvas to do something wild with and ultimately landed on the “Transitional Speedster” design seen here.

According to the company, “Porsche enthusiasts know that the ‘Speedster’ model was made between the years of 1954-1958, being replaced by the Convertible D in 1959. When Rod gained a client looking for an open car concept, he knew that making a Speedster-like car from a coupe was entirely feasible.” With that, every aluminum panel of the car would be touched either to repair the decades of damage and weather, or to transform the car from coupe to Speedster spec.

Though the casual observer won’t be able to identify all the subtle and nuanced changes made to the exterior of the Porsche 356, the least subtle change is the car’s now open top status. Without a roof, Rod’s customer will be able to experience the wind in their hair and to listen to the Speedster’s naturally aspirated engine. Apart from the roof removal, Emory Motorsports “hand-formed” an aluminum tonneau cover and headrest fairing for the driver, which is integrated with Emory’s roll cage. There are new “body-hugging bumpers,” a louvered engine lid, hood handle delete, and a new fuel-filler access cap for the car’s custom 18-gallon fuel tank.

The exterior is finished in a “period-correct” Aquamarine Metallic paint and Mobil’s classic Pegasus logo on the front fender.

Those familiar with Emory Motorsports will know that the mad scientist couldn’t help but go through the car’s dynamics too. Underneath the engine lid is a proprietary Emory-Rothsport Outlaw-4 engine that was co-developed by Emory and Rothsport Racing’s Jeff Gamroth. The dry-sump 2.4-liter flat 4-cylinder engine is fed by twin Weber 48IDA carburetors and uses a 4-speed manual transmission to drive the rear wheels. Emory says its good for 205 horsepower, which doesn’t sound like all that much until you learn this 1959 ½ Speedster only weighs 1,850 pounds soaking wet.

Poke around the Outlaw Speedster’s chassis and you’ll find that Emory strengthened the entire unit to handle “more than triple the standard power.” That included Porsche 901-style independent rear axle and suspension, adjustable Koni dampers, a set of custom sway bars, custom brake rotors and calipers which supposedly give the 356 Speedster “911-level” stopping prowess, and finally a set of Tecnomagnesio wheels shod in Dunlop SP 5000 tires.

Inside the cabin, the Speedster’s interior is function over form. Emory calls the interior “spartan” but we just call it clean. The two-seat Speedster uses a red leather from Hydes, new Speedster-style seats, and a reimagined dashboard. Emory looked to the Porsche 904 when it came to gauges and the car’s triple layout for speedometer, tachometer, and a final multi-function gauge for oil temp, pressure, and fuel. A Derrington steering wheel finishes the car’s aesthetic.

Of the car, Rod Emory said, “Porsche enthusiasts will notice that this build does not wear a ‘Speedster’ emblem. This is a nod to the car’s coupe beginnings and to the idea that we are celebrating the best of what this car still had when we found it. The ‘1959 ½’ designation also signifies how this car straddles model years and body styles. This Outlaw 356 illustrates just some of what is possible with our talented crew here at Emory Motorsports and the result is bringing new life to a car that would have been lost to history.”

As for how much the new owner paid Mr. Emory to Speedster-ify the car, mum is the word. However, standard versions of Emory’s Outlaw 356s can eclipse $300,000, so a safe bet would be that this 1959 ½ Porsche Speedster Outlaw commanded an even higher sum. Whether the car is worth it is up to those with the funds to buy one. That said, we’ve driven Emory’s cars before and we were left stunned and wishing our paltry bank account was that of Scrooge McDuck.

Inspired by Porsche’s iconic 908-010 K and the neurotic attention to detail that birthed it.

And it’s only got two wheels?