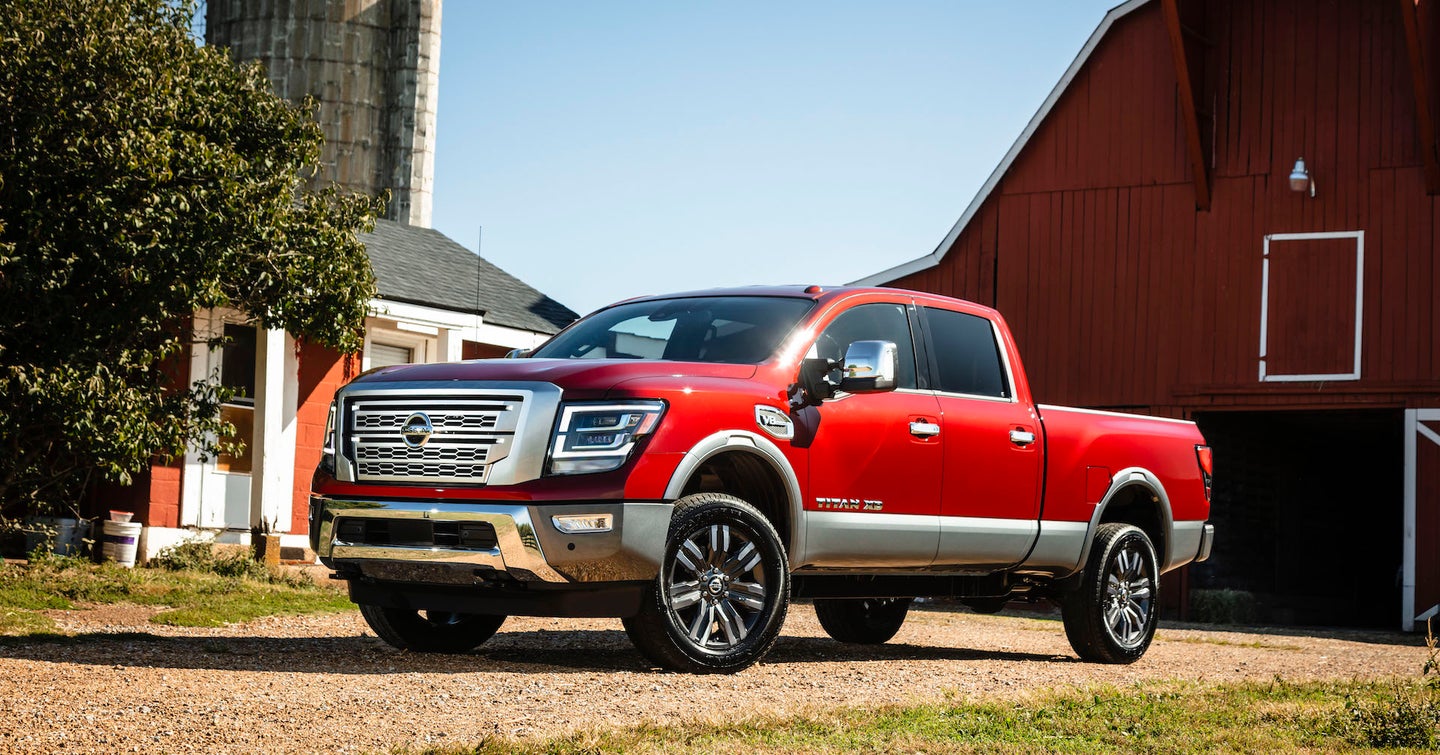 Earlier this year, we broke the news that Nissan would be killing off the Cummins-powered Titan XD while also doing away with all regular cab models. In some ways, it seemed like the company was throwing in the towel on the "full-size-plus" pickup. And with a redesigned normal Titan debuting at this year's State Fair of Texas, it was a bit unclear if the XD would be refreshed at all. Now we know that's not true and that there will be a refreshed version of that truck next year, which we were able to see in the flesh over the weekend.

Debuting during the Tennessee Titans football game on Sunday, The Drive took an up-close and personal look at the updated truck. However, all specifications remained embargoed until now.

You'll notice in the photos that most of the design is carried over from the normal, half-ton Titan, but the similarities continue beyond that.

The 2020 Titan XD is powered by Nissan's 5.6-liter Endurance V8 making 400 horsepower and 413 pound-feet of torque. If those numbers sound exactly the same as the updated engine in the regular Titan, it's because they are. The Titan XD is also getting Nissan's new nine-speed automatic transmission.

To make the lineup simpler and reduce manufacturing complexity, all 2020 Titan XDs are crew cab models with a longer, 6.5-feet bed. All trucks also come with four-wheel-drive standard. Improving on the pickup's payload and towing numbers, the Titan XD has a fully-boxed, reinforced steel frame with larger brakes that are even ventilated in the rear.

Additional mechanical changes include a revised final gear ratio of 4.083:1 compared to the Titan's 3.692:1. That means more torque is delivered to the wheels sooner, helping to improve towing acceleration. Most models have a brake-based limited-slip differential in the rear, but the Pro-4X receives an electronic rear locker like in the half-ton.

"Titan XD is for someone who wants a Titan but needs to be able tow or haul more than the standard customer," said Keith St. Clair, Nissan's director of lifecycle management, to The Drive.

Aside from the heavier duty components, larger frame and bed, and taller ride height, the 2020 Titan XD is very similar to the half-ton. Both trucks receive the new infotainment system with an available 9-inch display, which includes support for Apple Car Play and Android Auto, plus the optional Fender audio system that's returning for the new year. There's also a new digital instrument cluster that's part of Nissan's efforts to give the Titan XD's interior a more premium feel from top to bottom. Nissan's new Safety Shield 360 tech, including adaptive cruise control, is also available.

Towing figures on the regular Titan or Titan XD have been revealed. More details will be released as the truck gets closer to launch, which should be early 2020.