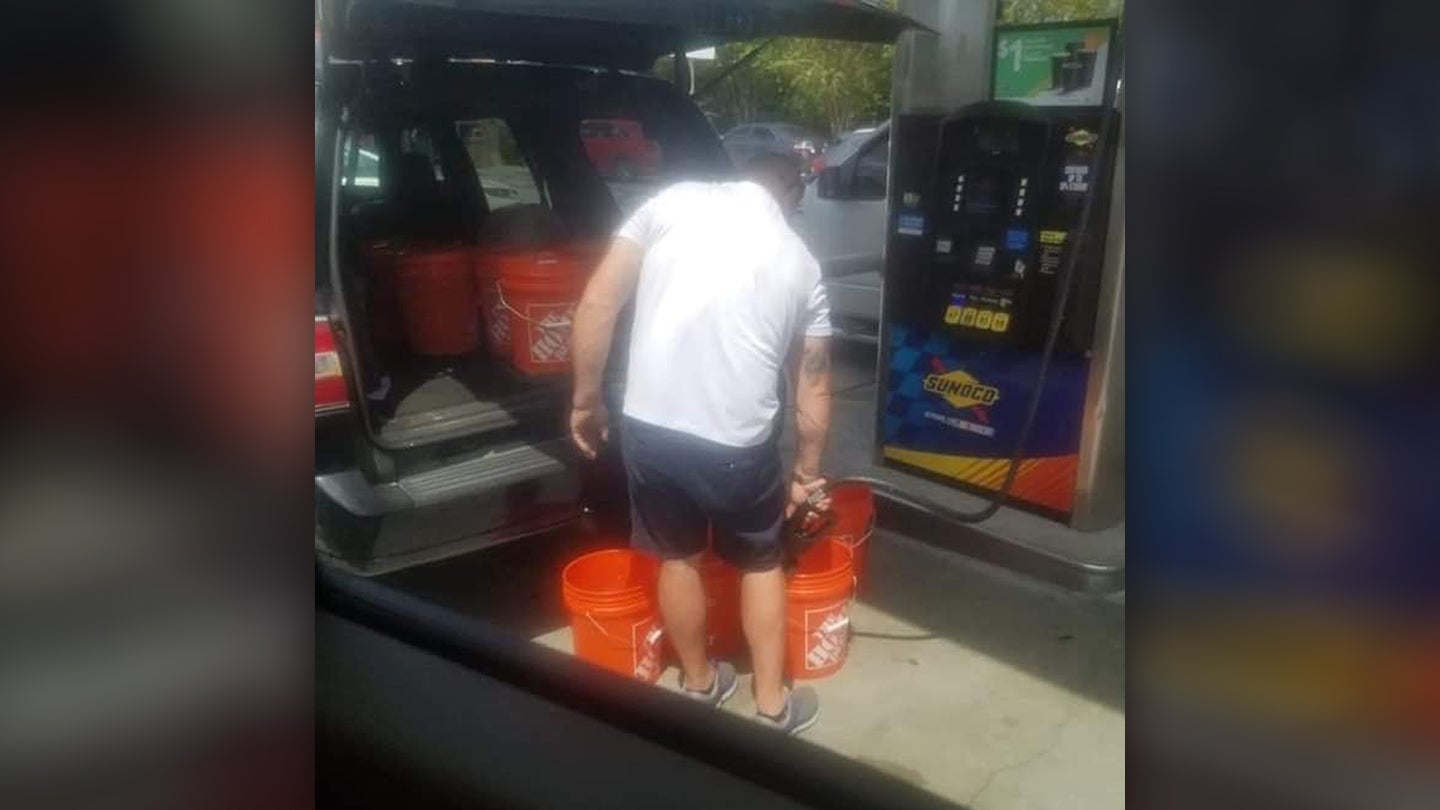 Gas stations in Florida are beginning to run dry as state residents brace for the arrival of Hurricane Dorian this weekend. That includes the notorious Florida Man, who was spotted at a gas station on Friday filling up nine buckets of unleaded and stashing them in the back of his SUV. File it under things that shouldn't have to be said: this is both illegal and highly dangerous.

The photo was taken by Floridian Amie Wilson and posted to Facebook on Friday afternoon along with a caption bemoaning the state of humanity. It's a beautiful tableau of stupid, the offender determinedly pouring gasoline into one Home Depot 5-gallon bucket after another, stashing them in the back of his old Ford Expedition. Just a fine Florida Man encounter.

As the picture spread on Facebook, local officials quickly refashioned it as an appropriate PSA. "If there ever was a picture that should be titled 'BAD IDEA' this is it," the Highlands County Sheriff's Office wrote. "Don't be this person. We know everyone is anxious and trying to stock up on gas, but come on! This is dangerous and it's illegal."

For the 0.5 percent of the population who don't see the problem, gasoline should only be stored in approved containers designed for that purpose, and it should never be transported in the cabin of a vehicle. The reason for both warnings: gasoline is highly volatile, and it gives off flammable, noxious vapors that can easily escape an improper vessel and fill an enclosed space. Enough fumes and a single spark from a loose wire in that old SUV could trigger a massive explosion—if the incapacitated driver doesn't land a DUI first.

We won't even get into what might happen to this guy's payload in a crash—suffice it to say those snap-on lids won't do much good. Those Home Depot buckets are useful for many things, but storing gasoline is definitely not one of them. And again, filling a non-approved container at a gas station is solidly illegal.

The situation in Florida is looking dire; according to CNN, some residents have resorted to leaving their out-of-gas vehicles at empty gas stations in the hopes of being first in line when a new tanker arrives. Hurricane Dorian is expected to make landfall as a Category 3 storm or greater, meaning sustained wind speeds well over 100 mph, heavy rains, and flooding. Staying safe will be a whole lot easier without improperly stored gasoline endangering yourself and others.