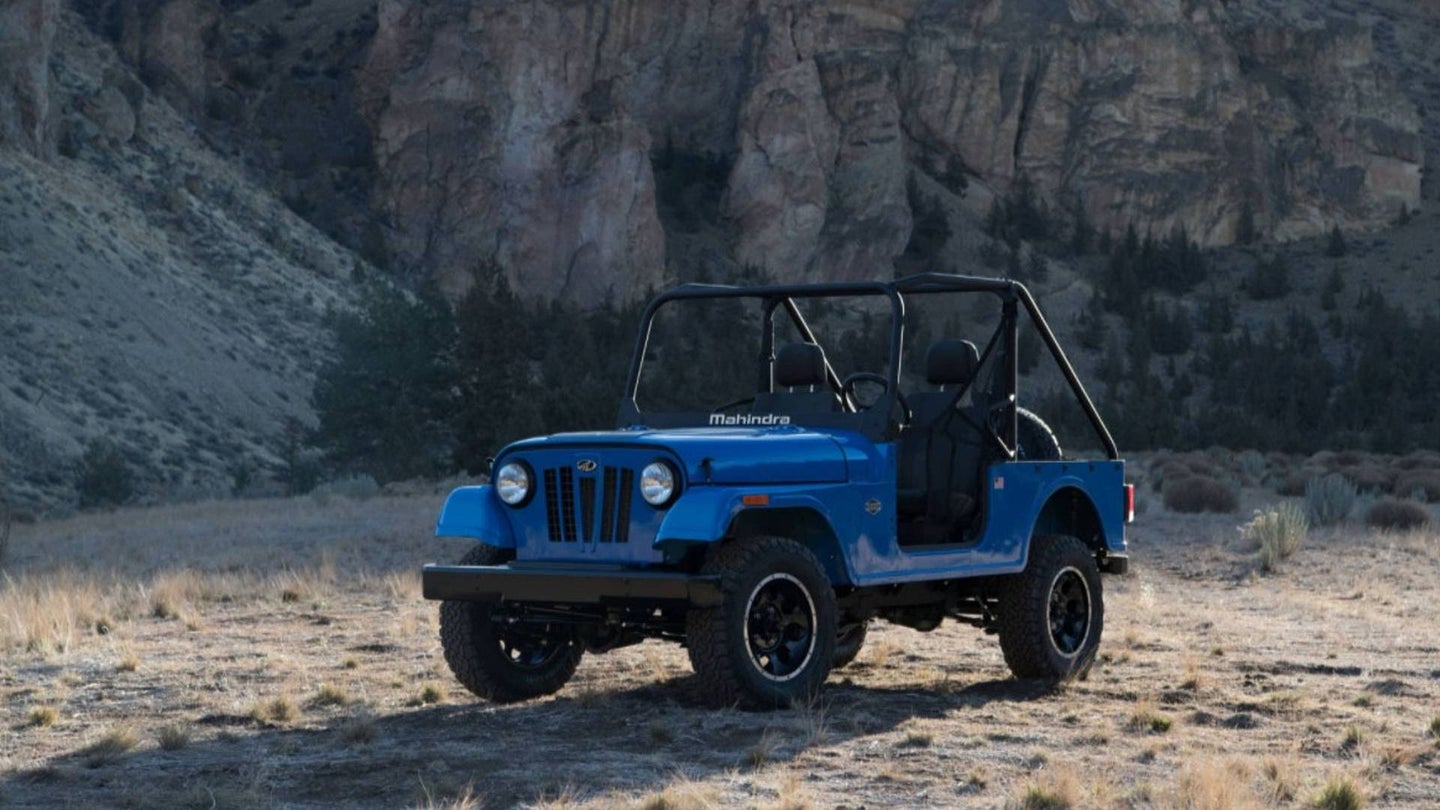 Indian manufacturer Mahindra is fighting back against Fiat Chrysler's attempts to block the importation and sale of the Roxor off-road vehicle, which bears more than a passing resemblance to the old Jeep CJ.

FCA, which owns the Jeep brand, filed a trade complaint against Mahindra in early August on the grounds of trademark infringement against the classic Jeep design, an FCA representative told The Drive at that time. While not quite a replica of the old CJ-2A, the similarities in design, styling and function are unmistakable. FCA wants to stop Mahindra from importing any components into the U.S. that infringe on its trademark. Mahindra's plan is to import knocked-down kits from India to a plant in Detroit where the Roxor's construction will be completed.

Mahindra counters with a claim that Chrysler Group, as it was briefly known after Daimler Chrysler split and before Fiat acquired it, specifically agreed in 2009 not to bring such claims against Mahindra if it used a grill that Chrysler had approved. The Roxor's grill is one that was approved at that time. Furthermore, Mahindra claims that FCA is using this case "to harm our Roxor business by creating negative publicity, damaging our reputation and our stature in the marketplace," according to a statement.

"The relationship began in the 1940s with the original agreement with Willys and continues to this day, with the most recent agreement executed with FCA (then Chrysler Group LLC) in 2009," Mahindra told The Drive in a statement. "Our actions, products and product distribution (including Roxor) both honor the legacy of the relationship and the terms of our agreements with FCA.  Mahindra has been co-existing with FCA (and the Jeep brand) for over 25 years in India and in many other countries."

In other words, Mahindra had an agreement with Willys, the company that originally invented the Jeep as we know it, and that agreement has remained in effect through all of the acquisitions and ownership changes of the Jeep brand.

While the Mahindra Roxor is similar in many ways to the Jeep CJs of old, Jeep's own equivalent, the Wrangler, has evolved into quite a different vehicle than the Roxor. It is larger, heavier, more powerful and far more comfortable. Importantly, it is also legal for use on public roads, which the Mahindra is not. The Roxor does not incorporate any concessions to modern highway safety or crash-worthiness that would detract from the experience of driving the next best thing to a new/old Jeep and willingly sacrifices road legality in the process. Despite their common roots, the two vehicles are not true competitors as they have evolved (or not) into vastly different vehicles. They do not compete against each other, and Mahindra holds multiple agreements from Jeep and its parent companies allowing it to build a the Roxor as a CJ clone for strictly off-road use.