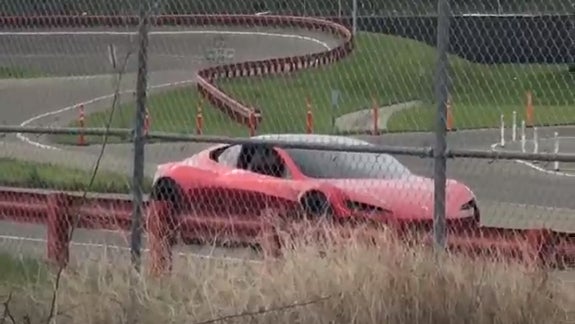 Even if we have no numbers to pin upon the car, we can say we know one thing about the upcoming Tesla Roadster: it's pretty dang quick. Maybe not as fast as the Falcon Heavy rocket that carried Musk's personal last-gen Roadster into space, and on to the classification as "celestial object," but fast by ground vehicle standards. As of Wednesday, we have a better view of the Tesla Roadster undergoing performance testing than ever before as Twitter user Shehryar Khan uploaded sneaky footage of the Roadster doing a hard launch on the track outside Tesla's factory in Fremont, CA.

To what speed the Roadster is being accelerated cannot accurately be gleaned from the video, though the sound of tires scuffing the asphalt is apparent, indicating a possible launch.

Tesla has yet to release finalized performance figures with the car's release still years off, but the mule is advertised as being capable of 0-60 miles per hour in 1.9 seconds, 0-100 mph in 4.2, and defeating the quarter mile in 8.9 seconds. It will surge on to a reported top speed beyond 250 miles per hour, possibly putting it in the same neighborhood as the world record-holding Koenigsegg Agera RS, which did 284 on a Nevada highway last year.

Can electrification be the future of police cars in the near future? Some Canadian police may think so.

After a surge of customer reservations, Tesla inches towards profitability.