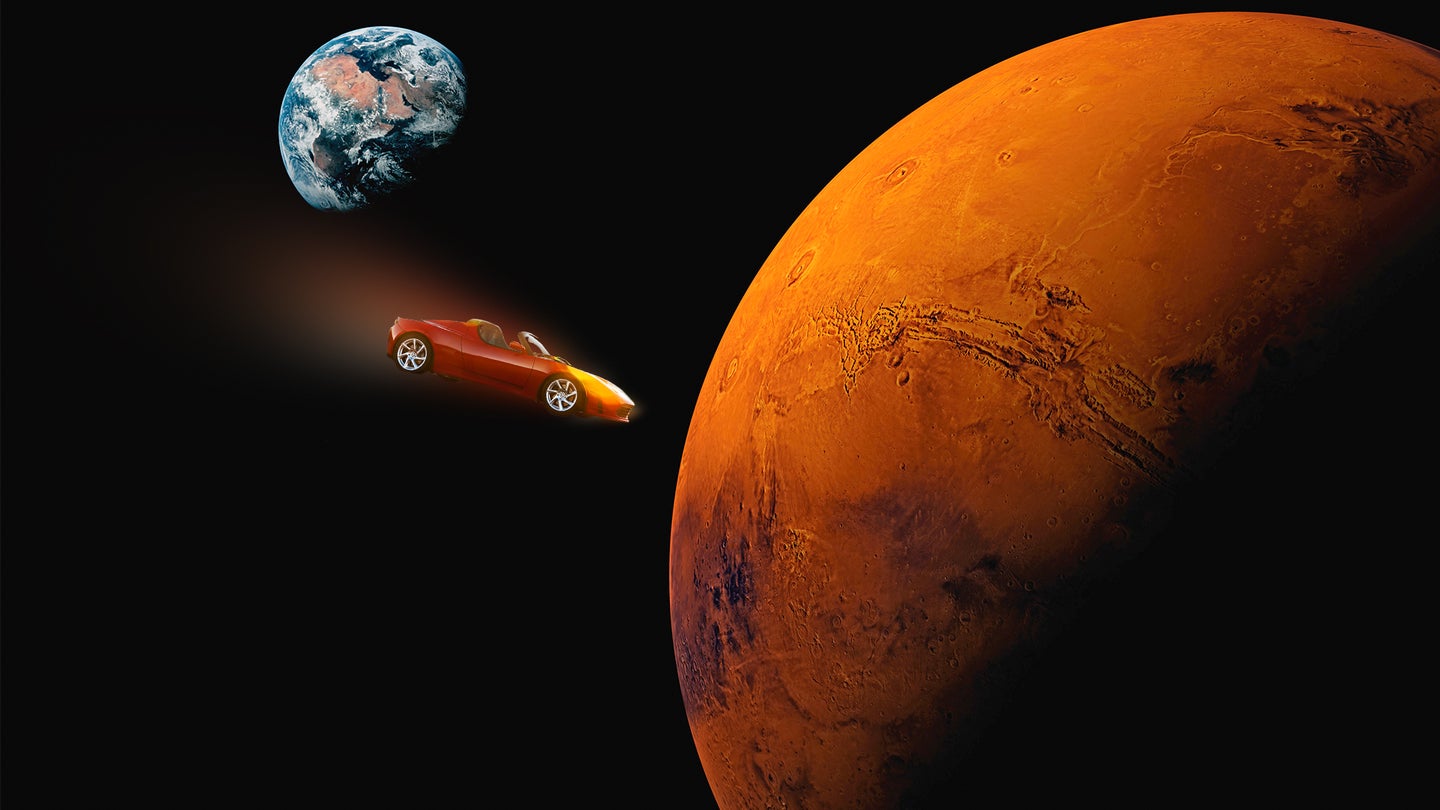 SpaceX is known for sending ridiculous things into orbit with its test flights, and the maiden voyage of its Falcon Heavy rocket will be no exception. Tesla CEO Elon Musk announced on Twitter that he is hellbent on sending one of his cars on an accompanying journey to Mars, just because he can.

After taking to Twitter on Friday to announce that SpaceX will have an opportunity to launch its new Falcon Heavy rocket towards Mars in January, Musk continued the tradition of launching ridiculous things into space when he cherry-picked his first generation Tesla Roadster—painted Midnight Cherry, no less—to take the ride. Assuming the flight actually makes it to space and doesn't blow up on the launch pad, joked Musk, it will be orbiting Mars for the next billion years.

On an earlier launch of SpaceX's Dragon, Musk's team decided to put honor Monty Python and send up the "silliest thing [they] could imagine" on the flight: a wheel of cheese. Now, a slightly more ridiculous, and laughably more expensive piece of cargo will be at a non-zero risk of being reduced to ash.

SpaceX has had previous encounters with failure, but it seems that if Musk is willing to risk a piece of corporate history, it's either expected to make it without a hitch...or spark a storm of media coverage if it does blow up on ascent (stay tuned to The Drive if so). It is rather important that SpaceX take this chance to have a successful launch, as a optimal window such as this occurs only once every two years.

"We want to use a minimum energy transfer orbit in order to use the least amount of fuel," explains Robert Frost, instructor and flight controller at NASA, "That means we launch the spacecraft about three months before Mars and Earth are at their closest."

Falcon Heavy is a trifecta of previously-perfected rockets designed by SpaceX. Three Falcon 9 rockets are strapped together, creating three times the thrust as the individual units. This will permit Falcon Heavy to take on tasks outside of the Earth's gravitational pull. Eventually, this rocket will be made obsolete by another one of Musk's future-esque visionaries, the Interplanetary Transport System, something which he hopes will allow for individuals to travel from one continent on Earth to another in under 30 minutes.

We're hoping that the test is a success and, although we'll be sad to see the roadster be banished to space (should it make it), it will at least make an interesting story for whoever finds it hundreds (or, according to Musk, "a billion or so") of years from now.