That’s one way to elevate the Los Angeles traffic experience 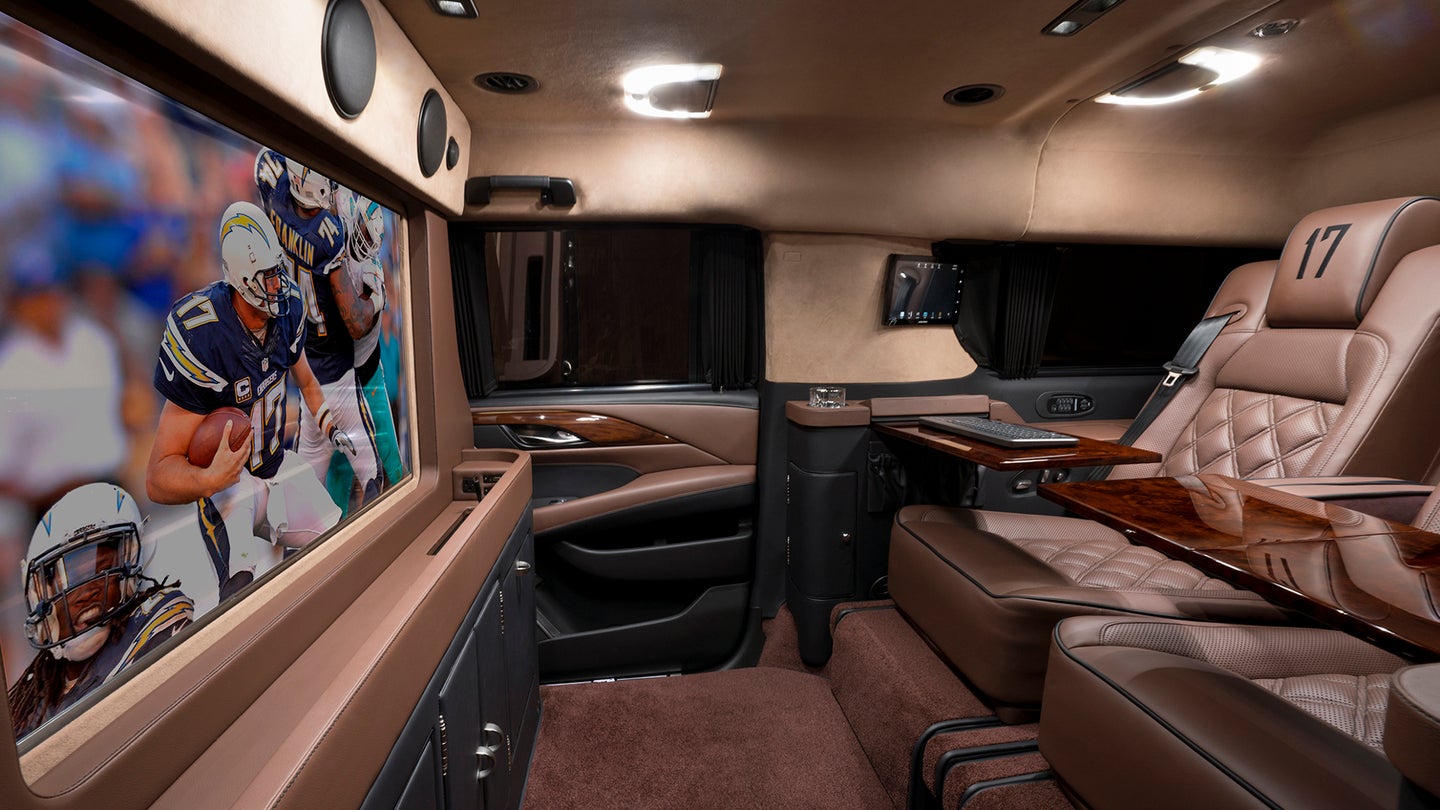 As sure as death and taxes, another NFL season is upon us. If you're still reading this, chances are you care enough to know that the San Diego Chargers took their talents to Long Beach (sorta) and moved from what's usually described as a fantastically liveable city to, well, Los Angeles. Understandably, franchise quarterback and 13-year Charger Philip Rivers didn't feel like uprooting his eight (!) children, opting instead to make the long distance trek between his home in San Diego and the team's new L.A. headquarters each working day.

But a three hour roundtrip commute like that is a lot of lost time for a professional athlete, so Rivers made sure he'd be productive by converting a Cadillac Escalade into a rolling mobile office and film room so he can study game tape even when he's sitting in traffic on the 5. And even though it's intended mainly for work, the luxurious touches (and whiskey tumblers) make it seem like the ultimate place to catch a game or movie, regardless of the destination.

Aside from having more children than Tom Brady has Super Bowl rings, Rivers is also well-known around the NFL for his spendthrift ways. Despite earning almost $200 million over the course of his career so far, the San Diego Union-Tribune reports he daily drives a 2008 Ford F-250 and prefers plain cowboy boots and Western cut dress shirts to the hottest fashion labels. So when Rivers first thought about getting a mobile office to compensate for the long commute, his instinct was to just convert the family Sprinter van—a plan his wife shot down.

"My two biggest things were my family time and my preparation and what I owe this football team," Rivers said. "I was not going to sacrifice either of them in any big proportion. I can look at all the pluses and minuses and say, ‘OK. This does it.’ This allows me to get home in the 6 to 7 hour, which is when I got home the last 11 years, and it allows me to watch all or more of the film I watched before."

So Rivers decided he'd have to do it right, hiring Becker Automotive Design to adapt a Cadillac Escalade to his exact specifications. That meant a big TV, a back seat comfortable enough for his 6-foot-4 frame, and a refrigerator—sorry, a "cooler" in his words—to stay hydrated. Ever the bargain hunter, he initially wanted to modify a cheaper used example with a big flatscreen, but he eventually settled on something he'd be able to resell.

The seats are labeled with the jersey numbers for Rivers and his backup Kellen Clemens, though there's no word on what happens when one man sits in the other's throne. Either way, the result is plush enough to wish for more time on the road.

"There may be some days where we’re hoping to get in a little traffic because we have more work to do."

His badly-damaged Nissan GT-R appears to have been broadsided.