This Lemons Cadillac Is Glorious Sacrilege, Powered By One of the Worst GM Engines Ever

It’s a race car. Is it fast? ‘Not at all,’ according to owner Rafi Ward. 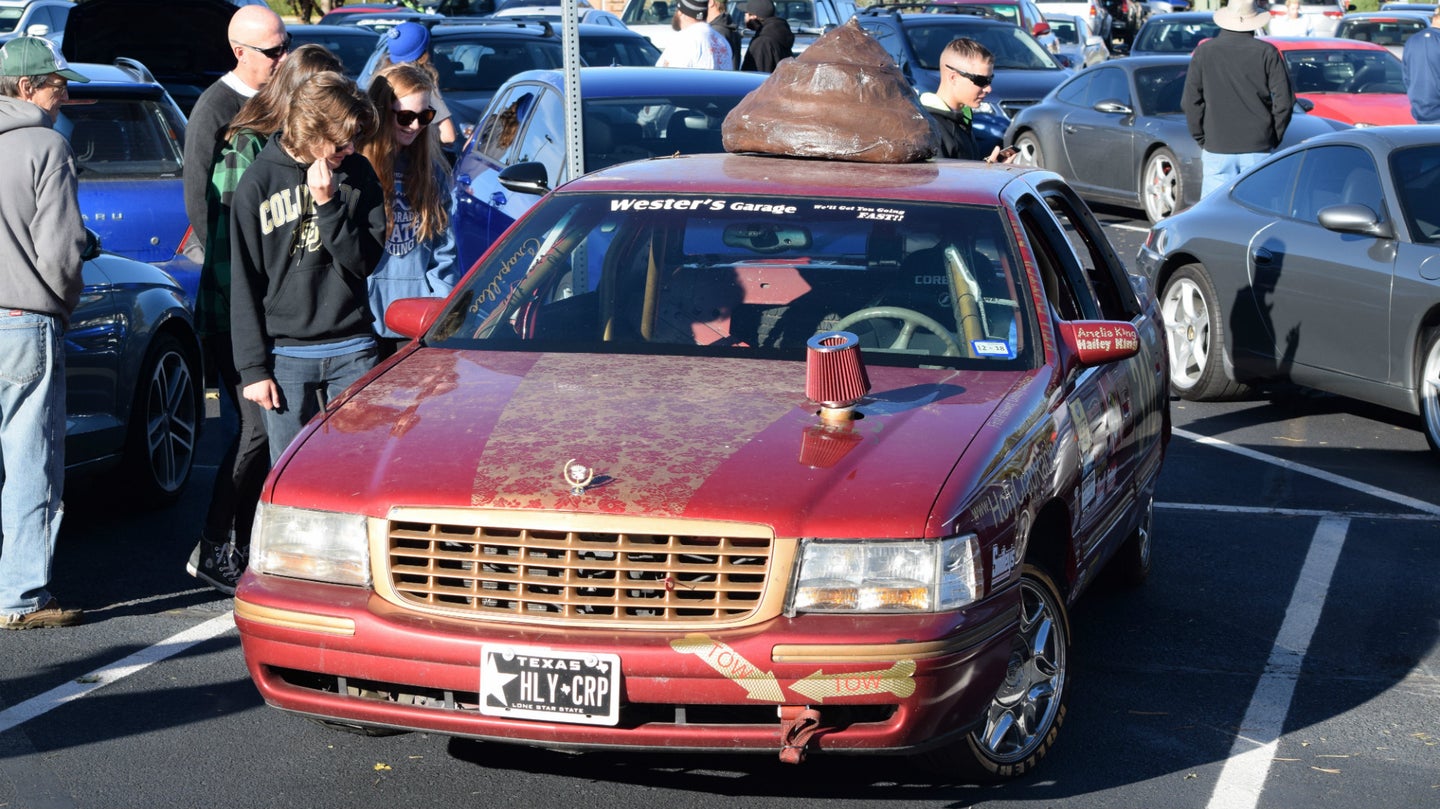 There's a right way to make a race car: A stout powerplant, stiff chassis, low center of gravity, and solid weight distribution typically make for a good basis for a race car. There's also the wrong way, which typically involves an entry application for Chumpcar or a similar grassroots race series, and the cheapest set of wheels you can find, regardless of condition. One Cadillac DeVille, was built by Holy Crap Racing in Texas, and was done so with the latter philosophy in mind. Now owned by a Rafi Ward of Boulder, Colorado, this sacrilegious and crappy Cadillac, powered by one of the worst engines ever made by General Motors, the Northstar V8, will continue its life as a 24 Hours of Lemons race car.

So, why in god's name did a front-wheel-drive sedan with an infamous engine get turned into a race car at all? I sought out the story from Ward himself, who tells a tale that begins with a Dallas, Tex. woman by the name of Glenda Carter.

"The quintessential little old lady," describes Rafi, "...had a Cadillac, just drove it to the church and back. Glenda had a problem with the Cadillac, because it was overheating."

"Because it's a Northstar?" I ask.

"Because it's a Northstar," Rafi confirms. "So, she puts it up on Craigslist, and for $350, the team [Holy Crap Racing] comes and takes it away."

"The team" refers to the quartet of Texans who bought and built this car before campaigning it in the MSR Houston round of this year's 24 Hours of Lemons season. Why did the team choose Holy Crap Racing as a moniker? A crap car, being driven to church and back can earn one name only: Holy crap. Hence, the paper mache turd on the roof.

In preparing the DeVille to race, they limboed themselves under the $500 bar by selling off the leather interior, yanked all the wiring, and pulled the engine to guarantee it was capable of surviving the rigors of a two-day race in Texas heat. With the heads off, new holes for Northstar Performance head studs were drilled to prevent one of the most common problems with Northstar engines: Stretched head bolts that cause head gasket failure.

With the changes made to the wiring, the ECU had to be reprogrammed, which the car's builders had to send off to one of two shops in North America that are willing to touch the rarely-tuned Northstar engine.

"As for the car's performance at the Houston race? The judges loved it," says Rafi. "They didn't get any black flags, car worked great, and they won organizer's choice!"

But why would the team get rid of a fully-functioning race car? It's not like the custom cage, engine control unit, and engine fixes were small investments of time and money. The answer is simple: Someone wanted out.

"The team had a falling out," says Rafi. "They bought the car as a team, and when one person said, 'I want my money back,' they decided to sell it, and use the money to get another car."

Listed for $1,100, the car was snapped up by Ward, and came with the full roster of receipts and paperwork, in a binder labeled Holy Crap Hymnal. A receipt for every financial transaction related to the car since it left Glenda Carter's care is tucked away in this binder, from the bill of sale to the car's original craigslist ad. There's even a receipt for the sale of a window switch, scribbled on a paper towel.

So, what does Ward have planned for this Cadillac DeVille?

"The next step is—and this is gonna be a long shot—getting it street-legal," says Rafi, miming air quotes. "If I can drive it to the event next year, I think the judges would love that."

But as for changing up the car to make it more competitive, or stop the floor from being covered in loose pine needles again?

"I'm not changing a single thing, I'm not even gonna take the previous team's names off! She's perfect as she is."

Watch this Angry Man Hang on to a Moving School Bus

One thing you should probably not do is try to board a moving bus.