The 2016 NASCAR Truck champion and current series leader continued his winning ways after leading over half the race at Charlotte. 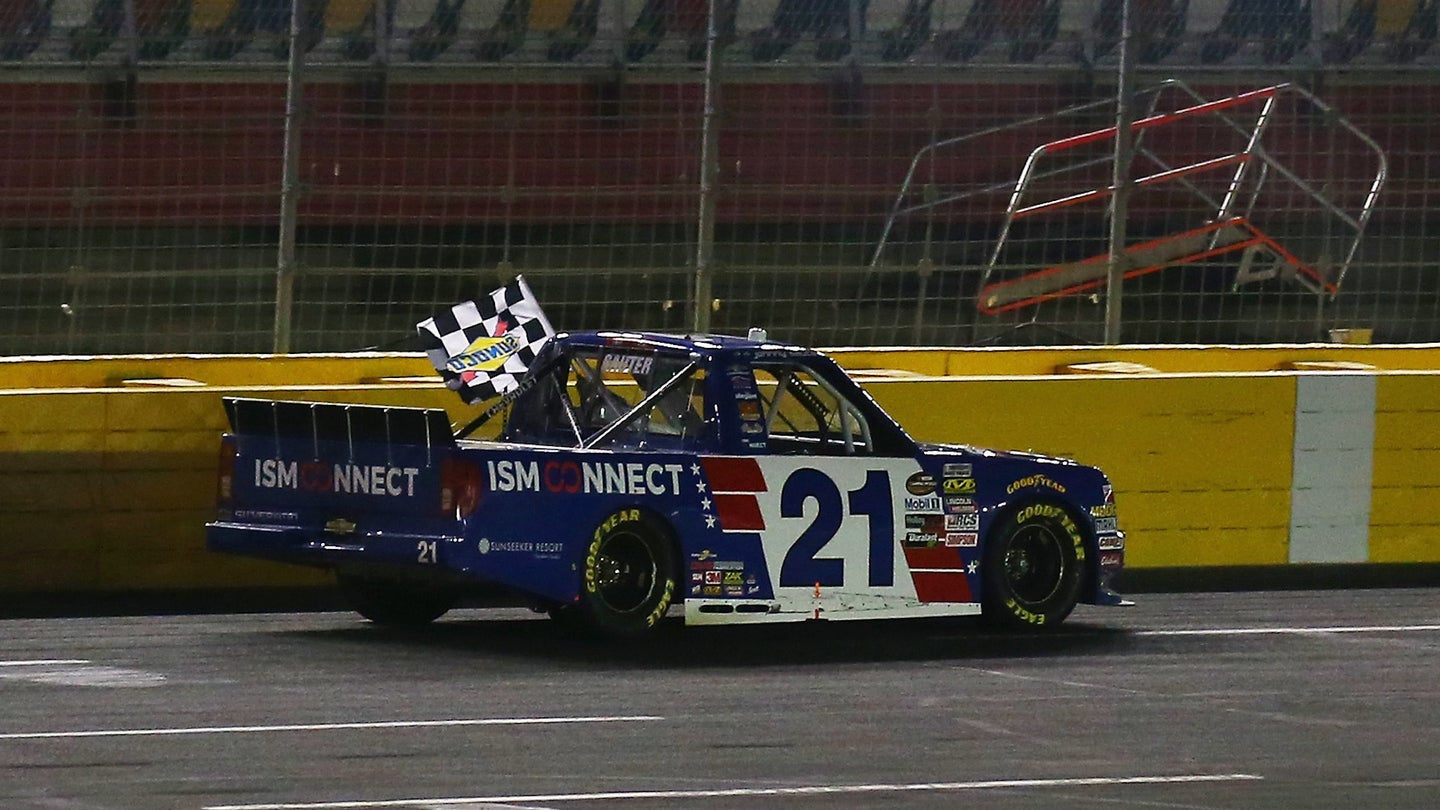 Johnny Sauter led 71 laps of the 137 that made up the NC Education Lottery 200 NASCAR Camping World Truck Series race at Charlotte Motor Speedway in Concord, N.C., on Friday night on his way to his third win in the first seven races of the 2018 season. It was his first-career win at Charlotte.

“This is a tough place,” Sauter said in victory lane after the race. “Everyone wants to win here. I never thought I’d win here. To win this race is just super special. I never thought 40 [years old] would be so good. This is the biggest race of my career, and I’ve won a lot of big races. We kept making adjustments on the truck all night and made it better and better.”

Sauter started on the pole by virtue of his No. 21 GMS Racing team’s position as series owner points leader as a result of rain forcing the cancellation of qualifying Friday. He led the first nine laps before he was passed by fellow-front-row starter Noah Gragson on lap 10.

Sauter led several times throughout the race. Aside from Sauter, other race leaders included Gragson, Brett Moffitt, and John Hunter Nemechek, with none of them leading over 30 laps. Moffitt and Nemechek were winners of the two 30-lap stages that made up the first 60 laps of the race, with Moffitt winning the opening stage and Nemechek the second.

Sauter took his final lead just before a lap 88 caution for a Josh Reaume spin, the fifth of seven cautions in the race. Gragson moved up to second on the restart, but soon after a restart from a lap-112 debris caution, Gragson’s truck got out of shape as a result of contact from Kyle Busch Motorsports boss and teammate Kyle Busch.

One final caution for Austin Wayne Self on lap 118 resulted in a restart with 10 laps to go with Sauter in the lead and Busch in third. By the checkered flag, Busch had moved into second. That second-place finish came after multiple problematic pit stops. A slow stop during a lap-21 yellow flag resulted in a 16th-place restart. Busch was then issued penalties on two-consecutive pit stops during cautions on lap 60 and lap 81, both for his crew going over the pit wall too soon.

“If my pit crew did not lose me six, seven spots and, then, have penalties and have to restart at the back every single time,” Busch said during his post-race media availability. “We passed the most trucks, but if you pass the most trucks, it doesn’t matter if you can’t win the thing where you need to be, restart where you need to be. Really pathetic night on pit road. These trucks are terrible in traffic. You can’t pass. Splitter game is horrendous. They want flat splitters, and you put flat splitters on these things and they plow.”

Brandon Jones finished third, and Moffitt and Ben Rhodes rounded out the top-five.