Even if you’re not sold on its looks, you have to admit the Crosstrek is a compelling package. 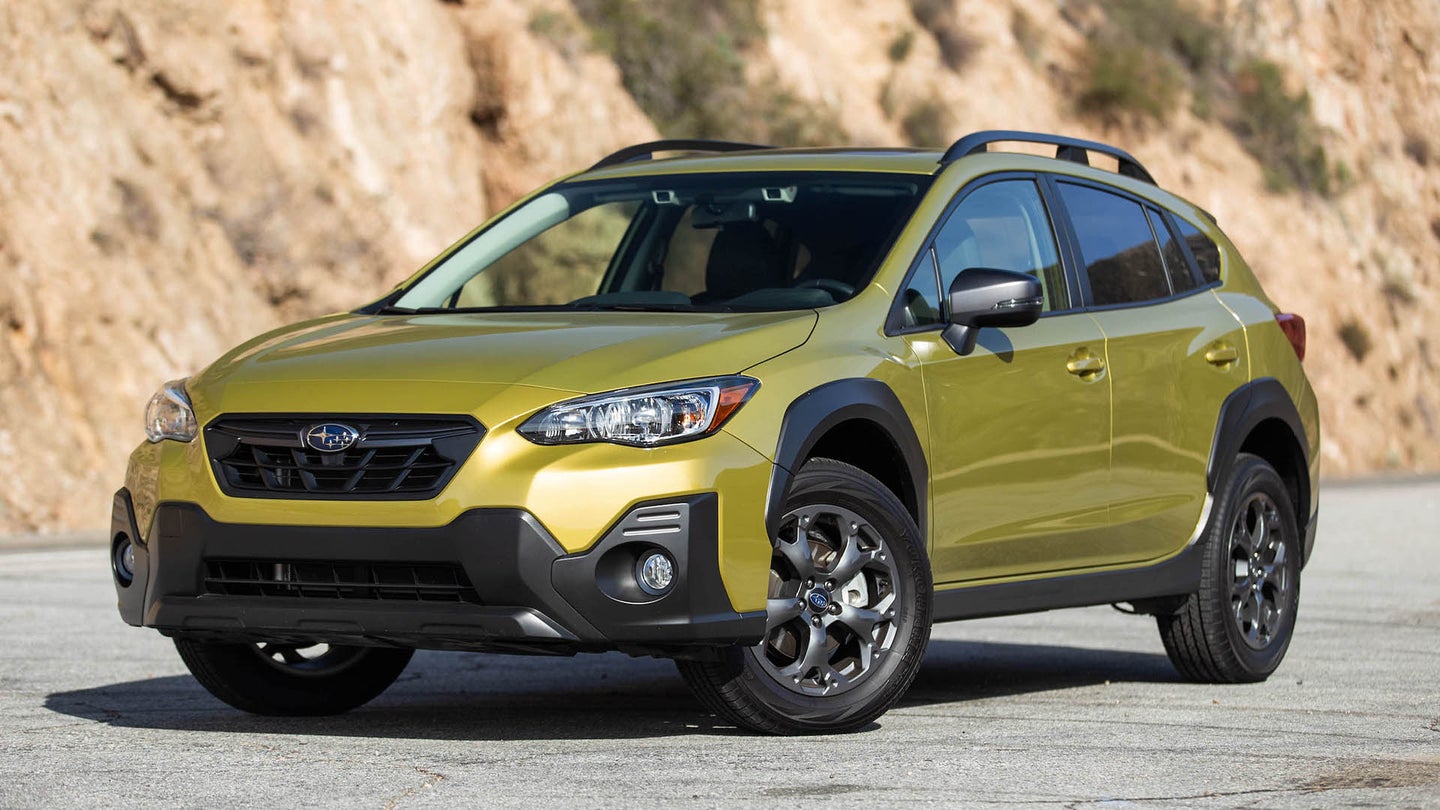 I don't know if you're aware of this, but there are Subarus everywhere you look. They're lifted, heavily cladded, equipped with standard all-wheel drive; in other words, they're the perfect car for people who live where it can get a bit snowy and muddy, or those who like the idea of going to such a place. The smallest of the automaker's lifted, hatchback-like SUVs is the 2021 Subaru Crosstrek. The things are ubiquitous. And there are good reasons for that.

The Crosstrek appears to be taking over the world chiefly because it's of a good size. You figure that out almost immediately. It's aimed at buyers who either don't have children or don't have very big children and thus don't need the extra room. Pair that with a reasonable price tag and a very agreeable interior and you've basically got a guaranteed top-seller on your hands.

After driving a Crosstrek Sport around Los Angeles for a week, I totally get the appeal.

The Crosstrek is Subaru's smallest SUV offering, sitting below the Forester, Outback, and Ascent. Classed as a subcompact SUV and introduced in 2012, the current Crosstrek represents the model's second-generation that launched in 2018. It comes in four different trims (Base, Premium, Sport, and Limited), can be had as a manual in Base or Premium trims, and also comes as a hybrid, too.

Exterior design-wise, I can't say I love the Crosstrek's overall looks. There isn't much cohesion to its aesthetics; it looks more like it's been made up of a lot of different shapes that don't have much to do with one another. There is a lot of black plastic cladding, too, but this is frankly not something I mind terribly much, and I do like how high it rides. New for the 2021 model year is a redesigned front facia and grille, a new wheel design for all the trims, and new paint colors: Plasma Yellow Pearl and Horizon Blue Pearl.

Things are much better inside. For one, there's a physical handbrake even though the test car was fitted with the CVT, and the steering wheel, gear selector lever, and pedals are all easily within reach via the manually adjusted seat. The optional, eight-inch touchscreen is underlined by physical dials and buttons for the radio and the car's climate dials and buttons are located under those. The driver information gauges are analog and easy to read. It feels like sitting in a car from 2018 but in a good way—a time before so many automakers collectively lost their minds and relegated everything to one giant touchscreen.

Base and Premium Crosstreks make use of a 2.0-liter four-cylinder that produces a claimed 152 horsepower and 145 pound-feet of torque. Sport and Limited models are equipped with the more powerful 2.5-liter four-cylinder that produces a claimed 182 hp and 176 lb-ft of torque. This new engine, which already existed in the Forester, was introduced during the Crosstrek's 2021 model year.

Poke around and you'll see that one of the biggest complaints about this car is that the Crosstrek is slow. With the 182-hp 2.5-liter engine, I can tell you the Crosstrek is not slow. It's fine. I can't speak to the base 2.0-liter engine and its 9.2-second 0-60 time, but not once in my week with the larger motor did it feel inadequately powered. True, on the highway, it's loud and drones into the cabin, but that's really the only part of the driving experience that might be considered unpleasant. The Crosstrek maintains highway speeds well and the seats are comfortable. They can be easily adjusted so that short people like me have no problem seeing over the car's hood and around its wing mirrors. The rest of the visibility is excellent. The radio and climate controls are intuitively laid out. All in all, it was a great car to commute in, LA traffic included.

Like other current Subarus, the Crosstrek's CVT is tuned to be eager off the line, which gives it a peppy feel when driving around town. The brakes are easy to modulate and don't grab hard at the top of the pedal and the steering, though light, is fairly direct. And as much as the CVT catches a lot of hate, I think it's unwarranted; the system operated quietly and with zero drama in the background, which is what you want. As a package, the car felt pretty chuckable despite its higher center of gravity. I felt confident enough to throw it around a bit on the Angeles Crest Highway, which was impressive. But what I appreciated most was that inside and out, the Crosstrek was a car I always felt I could just get into and drive. I didn't need to fiddle with a thousand settings every time I started it, or pick my way gently through crowded and tight parking lots, or take any special approach lines to steep driveway ramps. Even in an urban setting, the casual go-anywhere confidence a Subaru inspires has its appeals.

All CVT-equipped Crosstreks come standard with Subaru's EyeSight advanced driver-assist tech, updated this model year to have advanced adaptive cruise control with lane-centering. It made longer highway stints much more bearable, though I found some flaws in the system during stop-and-go traffic. In other cars I've tested, the adaptive cruise control stays on even if the car comes to a complete stop. In the Crosstrek, it shuts off completely and you have to manually restart it once you get moving again. But this is by no means a dealbreaker. Just something to be aware of.

The Highs and Lows

Even though the adaptive cruise control annoyed me during both of the times it shut off in traffic, it's also something a buyer would get used to immediately and probably not think about ever again. Sitting behind the wheel of a 2021 Crosstrek is a great place to be. I mentioned the seats are great, and overall the cabin is spacious; it might get a bit cramped with four large adults and all their luggage, but for two or three people, it's perfectly doable. You don't need the giant SUV if you're honest about how many people and how much stuff you regularly haul around. And again, these things are just so easy to drive.

Apart from excessive cabin noise on the highway (and the material cheapness it represents), I thought the biggest practical strike against the Crosstrek is that the trunk could be bigger. I brought my big suitcase to LA, you see, and it took up a large part of the cargo area. Now this feels vain, but really, the main thing I'm stuck on is the design! The front is fine, it looks like a Subaru, but the back is too chunky. It's squat and square and wears the expression of an Easter Island Head. Then again, looks are highly subjective and you don't see the outside of the car when you're driving it anyway. You do see its objectively plain dashboard design, but that's another thing that boils down to personal preference. You'll either think it's boring, or a welcome respite from increasingly overwrought interiors in other cars.

What's nice about the Crosstrek is that it comes with all-wheel drive as standard. Other subcompacts can't say that—if they offer all-wheel drive at all. Standard features include active torque vectoring, roof rails, 17-inch alloy wheels, more rugged looks, a 6.5-inch touchscreen, and a 60/40-split fold-down back row. Base vehicle price comes to $23,570 when you include destination. The test car came fitted with the larger, eight-inch touchscreen, a power moon roof, and was priced starting at $29,145.

The Crosstrek can count the Hyundai Kona, Kia Seltos, Mazda CX-30, Honda HR-V, and Jeep Renegade among its competitors. While it is priced a bit higher than the competition and with the exception of the Renegade, it's also the only one of the bunch that's more rugged in its intent, has greater ground clearance, and offers all-wheel drive. And since I'm here, I'll also mention that it has way more rear legroom than the CX-30. The Crosstrek isn't your basic, front-wheel-drive subcompact; it's one that you can tackle bad weather with and have some extra peace of mind. And it starts at a lower price than the Jeep.

The Crosstrek does come in a plug-in hybrid flavor, but that starts around $37,000 and only offers 17 miles of electric-only range from an 8.8 kWh battery pack and an overall 5 mpg combined boost over the pure ICE model. At that price, you have to really want a plug-in Subaru over a number of other hybrids in its class that offer more electric range or greater overall fuel economy, not to mention the increasing number of all-electric options. It's also fair to point out that the PHEV Crosstrek clocks in at 3,717 pounds, about nearly 500 pounds heavier than this one, so if you're regularly draining the battery and solely using its ICE powertrain, it's going to be a lot less efficient.

As Subaru's third best-seller behind the Outback (181,178 units sold) and Forester (180,179 units sold) in 2019 (the last year when the auto industry was relatively normal), it's interesting that the smaller Crosstrek (131,152 units sold) was more appealing to buyers than the larger Ascent (81,958 units sold). Interesting but also encouraging, as it tells me that if you make a subcompact versatile, comfortable, capable, and give it all-wheel drive, people will go for it. There are a bunch of trims to choose from and I particularly like that its pricing starts closer to $20,000 than $30,000.

That charm is only made all the more obvious when you actually drive the thing. It's uncomplicated and unfussy. Enthusiasts might snub it for being an appliance, but for the majority of buyers, that's exactly the point of an all-rounder bought for commuting. For anyone looking for a car with which to do car things—drive, haul, get dirty, and lightly tow—this is it.

Don’t think the Forester became any less comfortable or practical with the extra off-roading hardware.