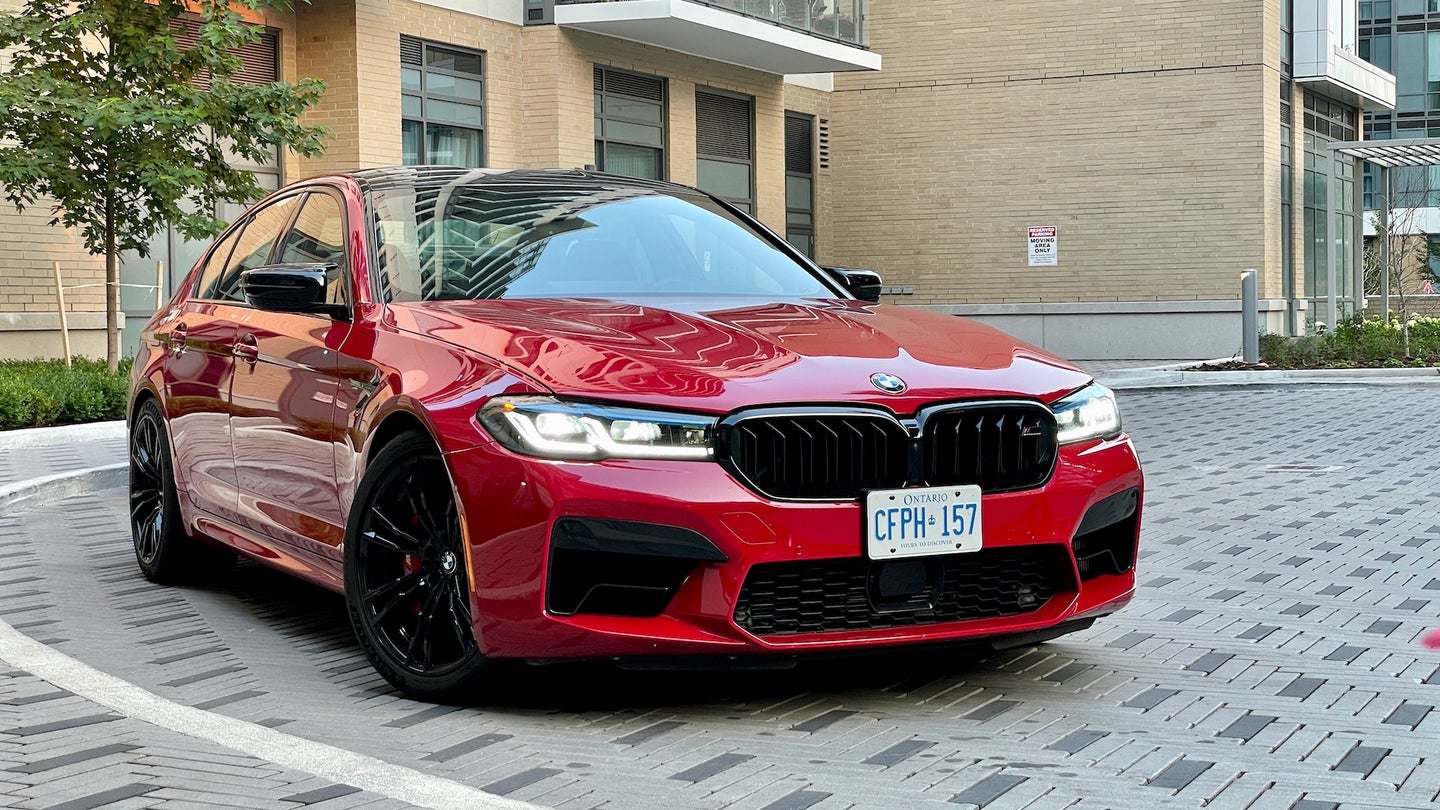 There are certain cars people like to put on a pedestal. Ferraris immediately come to mind, as do Porsche 911s, and—for very different reasons—Teslas. Arguably, the BMW M5 also falls into this category. The E39 version from the early 2000s is routinely recognized as one of the greatest sedans, if not one of the greatest cars, of all time. After having driven the 2021 BMW M5 Competition, however, I’m not sure the nameplate’s legendary status is doing this latest version any favors.

Of course, BMW's salespeople will likely argue otherwise as they rake in their commissions, but as a driving machine, this modern five-passenger Autobahn missile feels outstandingly ordinary. Its tameness is probably an upside if you intend to use the M5 looking for daily-able comfort like our managing editor Jerry Perez did earlier this year. But if you're gonna do that, a loaded-up Honda Accord provides about 75 percent of the experience for less than a third of the price.

No, if I'm splashing $150,000 on a bright red, 617-horsepower luxury car, I want it to be obvious in the machine's every sinew. And, to be fair, the M5 Comp is very fast, mighty luxurious, and extremely well put-together. But as a driver's car, just isn't quite as epic as its reputation may suggest.

*All prices in Canadian dollars unless otherwise noted.

Now in its seventh generation, the BMW 5 Series is the luxury brand's mid-size sedan. The go-to choice for the guy or gal who has grown up and out of their junior associate 3 Series but doesn't have quite enough coin or clout yet to go for the big boss 7.

The 600-horsepower M5, of course, is the high-performance variant while this 617-hp M5 Competition you see here is the even higher-performing variant of that and, I suspect, the one most people actually get and are interested in, bar the even harder core, limited-run M5 CS. 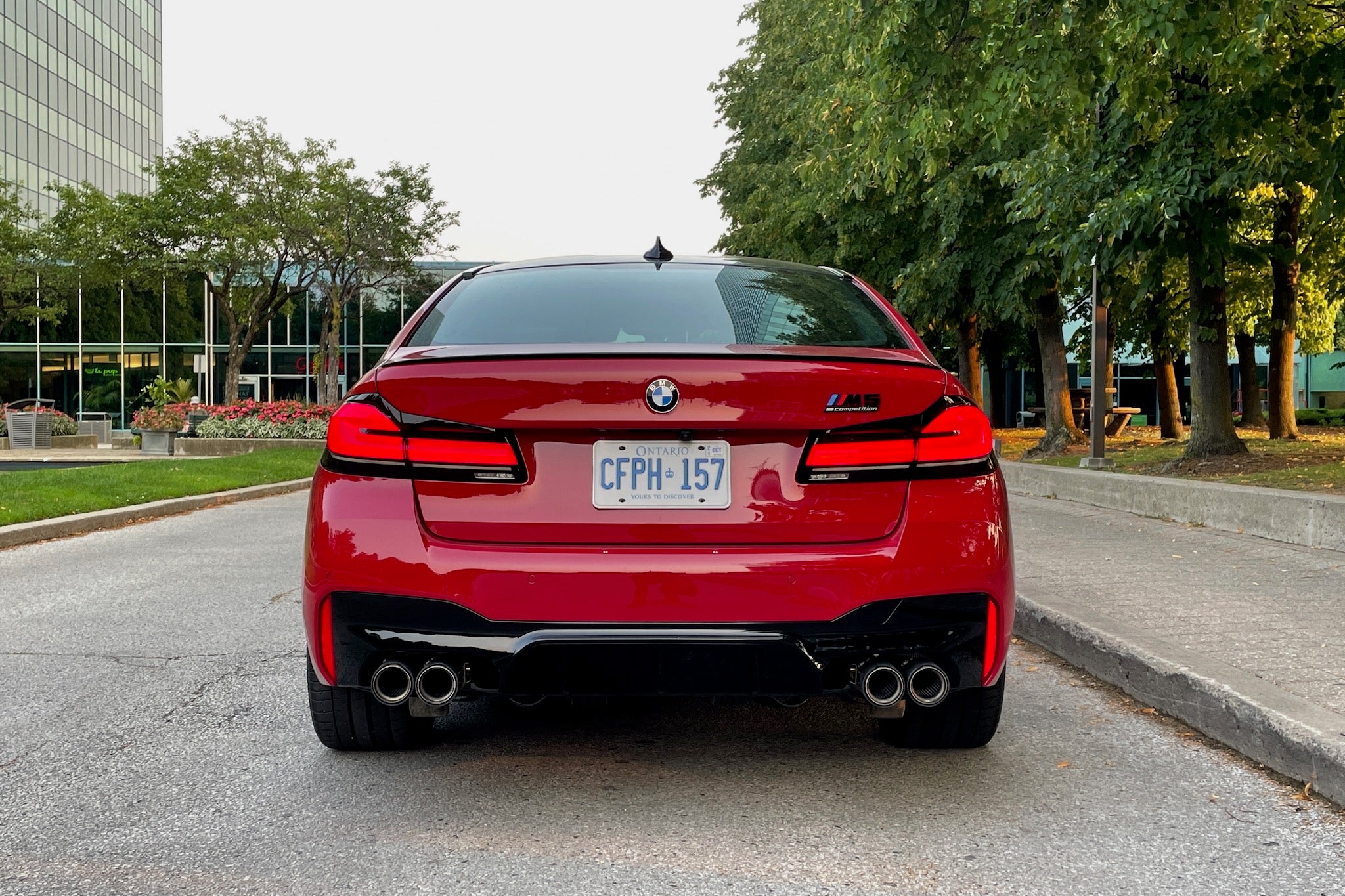 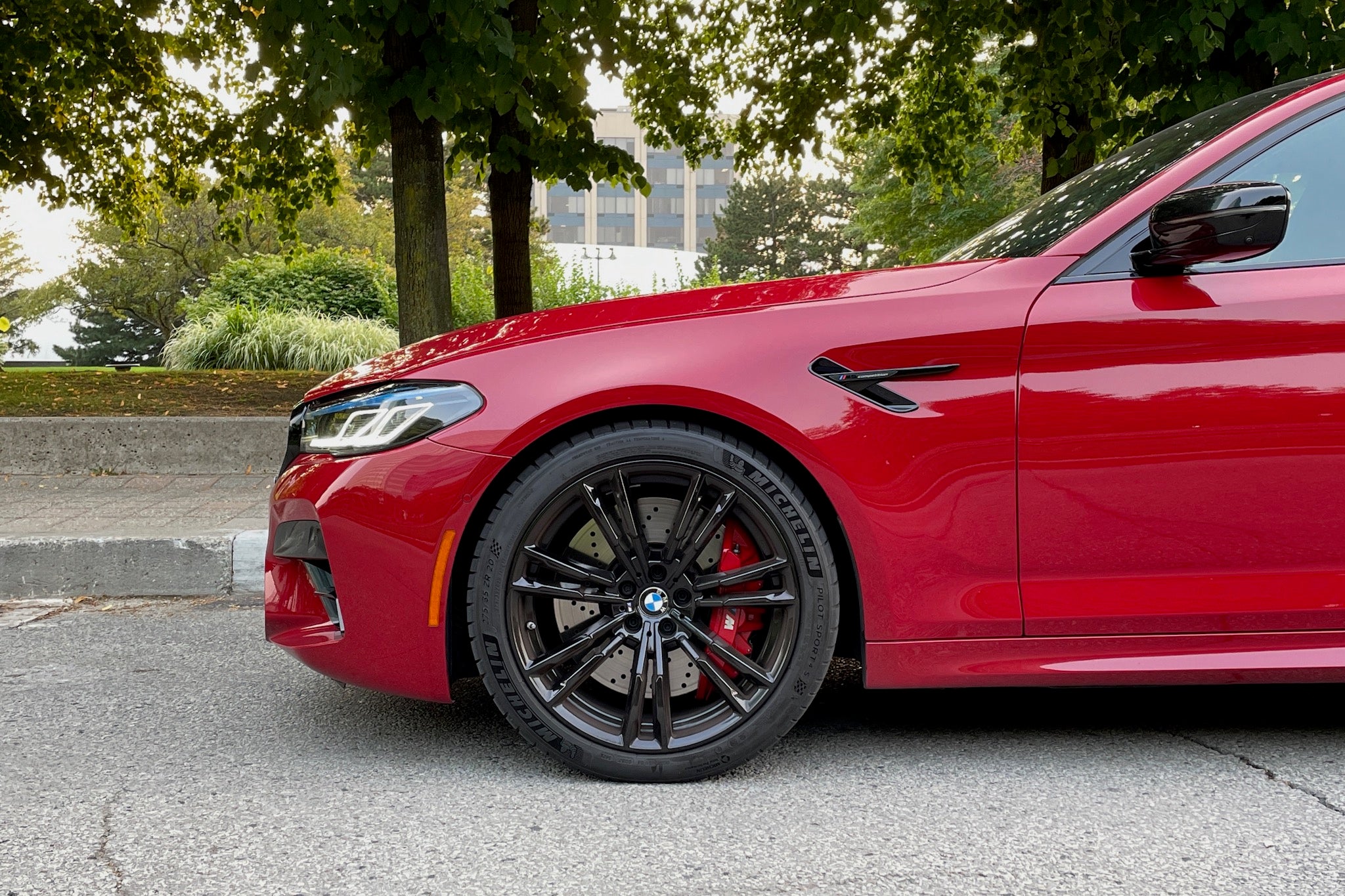 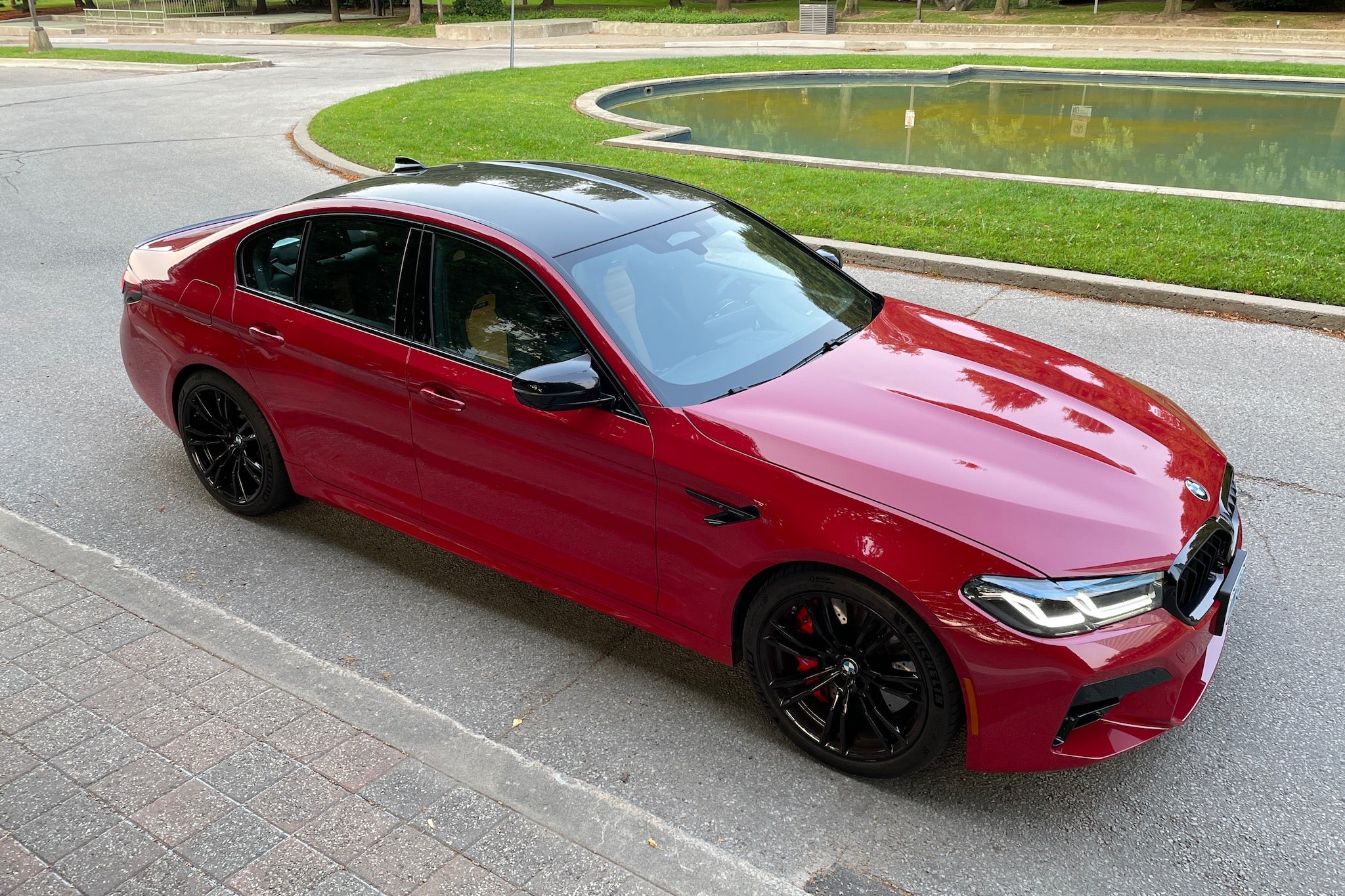 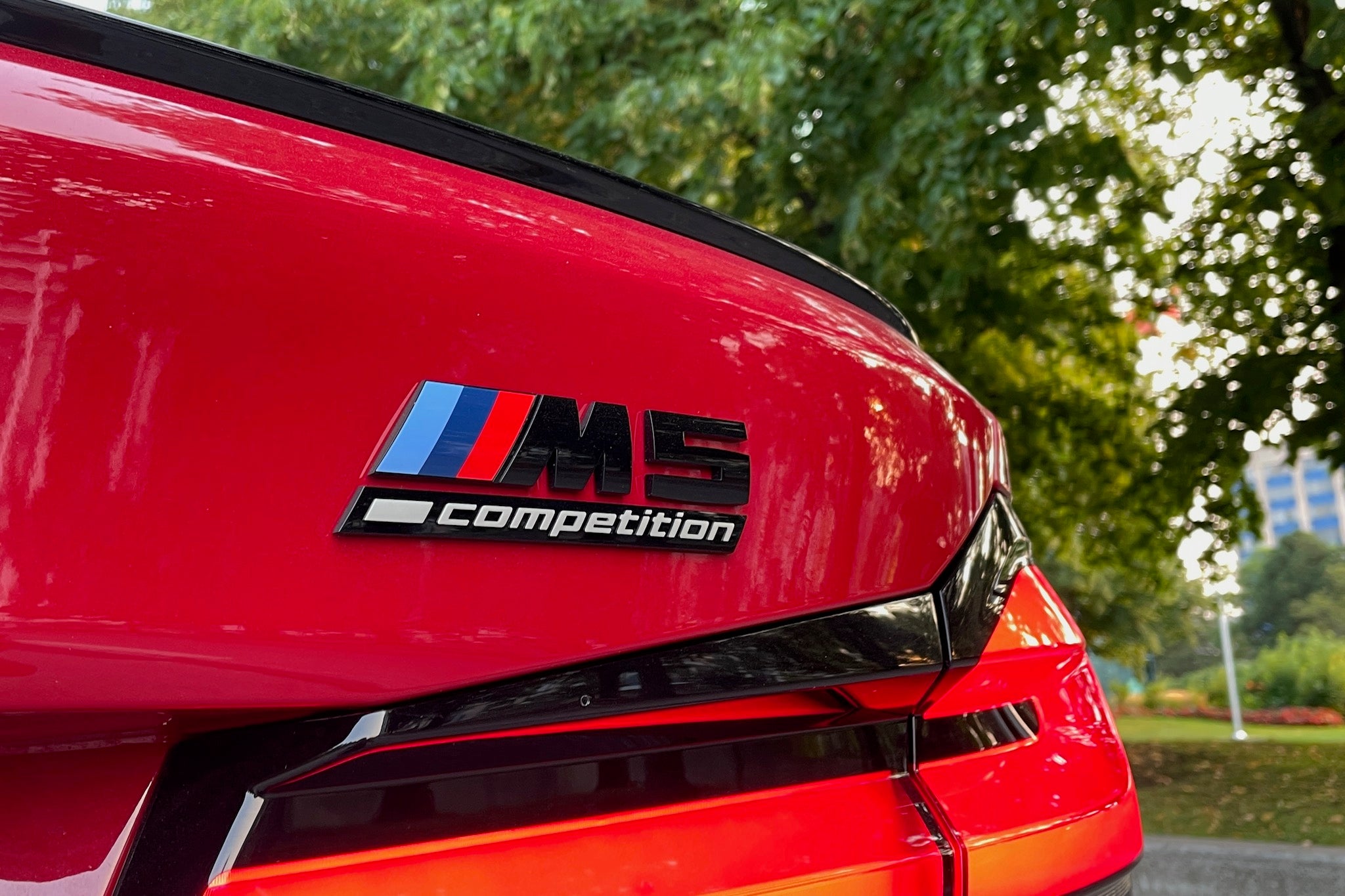 (By the way, has anyone ever reviewed or even seen a 2021 model year, non-Comp, regular-ass M5 outside of BMW's online configurator? I'm not even sure that car actually exists.)

Firing up the M5 Competition for the first time, the 4.4-liter V8 started with a raucously, excessively loud roar. Turns out, this was the work of the carbon-tipped M Performance titanium exhaust, a $6,000 optional extra. While highway drone is minimal and the volume is quite appropriate when you consider the pace on-tap, cold morning starts are a dog- and baby-frightening, neighbor-waking event. At speed, the V8 sounds throaty with an aggressive crackle that brings to mind a phlegm-congested dragon.

It's definitely shouty and lets people know you've arrived. But the sound of BMW's V8s have never really been as melodic or evocative as, say, the eight-cylinders associated with names like Shelby, AMG, Ferrari, Hellcat, Jaguar, or even Lexus. Some of those cars are worth having for the sound alone. I just can't say the same for this M5's titanium-magnified voice.

Sound aside, the M5 Comp is—to use a technical term—really fucking fast. Both grip and acceleration are several magnitudes higher than any reasonable person would ever need on the street but steering is precise but not especially more feelsome or engaging as any other regular sedan. The brake pedal feels similarly everyday to the foot but, of course, is connected to a set of M Compound stoppers strong enough to launch its driver through the windshield GTA-style if bolted onto a Miata.

The transmission, an eight-speed torque-converter automatic, is tuned very much with comfortable fluidity in mind rather than seat-bucking drama although initiating launch control is followed by some decently jolty full-throttle upshifts. Manual shifts requested via paddle come quick but aren't instantaneous. The ride is quite comfortable even in the rough-and-tumble Sport settings.

It all adds up to a driving experience that, other than the slightly overdone aural theater coming out of the exhaust, feels... ordinary. Don't get me wrong, the M5 Comp remains objectively capital-F fast and able to do things in corners that are scarcely believable given its size but it never feels thrilled to be there. It's staid in how it delivers that speed, never gets unhinged or even a little silly.

Outrunning supercars is, by definition, the M5's job and this one definitely gets it done. With the keyword here being "job." Eviscerating a backroad with the M5 rarely feels like an act of fun but rather a purpose-built machine simply going about its duty. It clocks in and then it clocks out. And that's even when you're driving fast.

Overall, I always liked how this gen of 5 Series looked on the outside and the M5's bigger intakes, rear diffuser, and quad exhaust tips (surrounded by carbon on this optioned-out tester) make it even more attractive. Along with the rest of the 5 Series range, the 2021 M5 receives a facelift consisting of a slightly bigger kidney grille, a cleaner-looking front fascia, new headlights and taillights, and a new rear bumper. Opting for the Competition pack over the base M5 makes the grille surrounds, mirror caps, rear lip spoiler, and badges gloss black.

Small rant about the color-and-wheel spec of this particular M5 Comp: I've written about this before but, in my mind, painting a BMW—any BMW, bright—non-metallic fire engine red (Imola Red II on this one's spec sheet) just feels... wrong. What's more, the optional wheels (a standalone $500 add-on) are painted all-black in a way that makes them visually completely disappear underneath the car. My BMW rep also later said that these wheels happen to be the heaviest ones you can get on this car, so, take that for what it's worth when it comes to its underwhelming, aforementioned driving characteristics.

Moving to the inside, while iDrive 7 is one of the better infotainment systems on the market, it falls short of being perfect. Case in point: Apple CarPlay initially refused to launch no matter how I connected my phone. I tried Bluetooth, USB-A, USB-C, turning the phone off and on again, turning the car off and on again, no cigar. After a reset of the system, however, CarPlay worked fine. 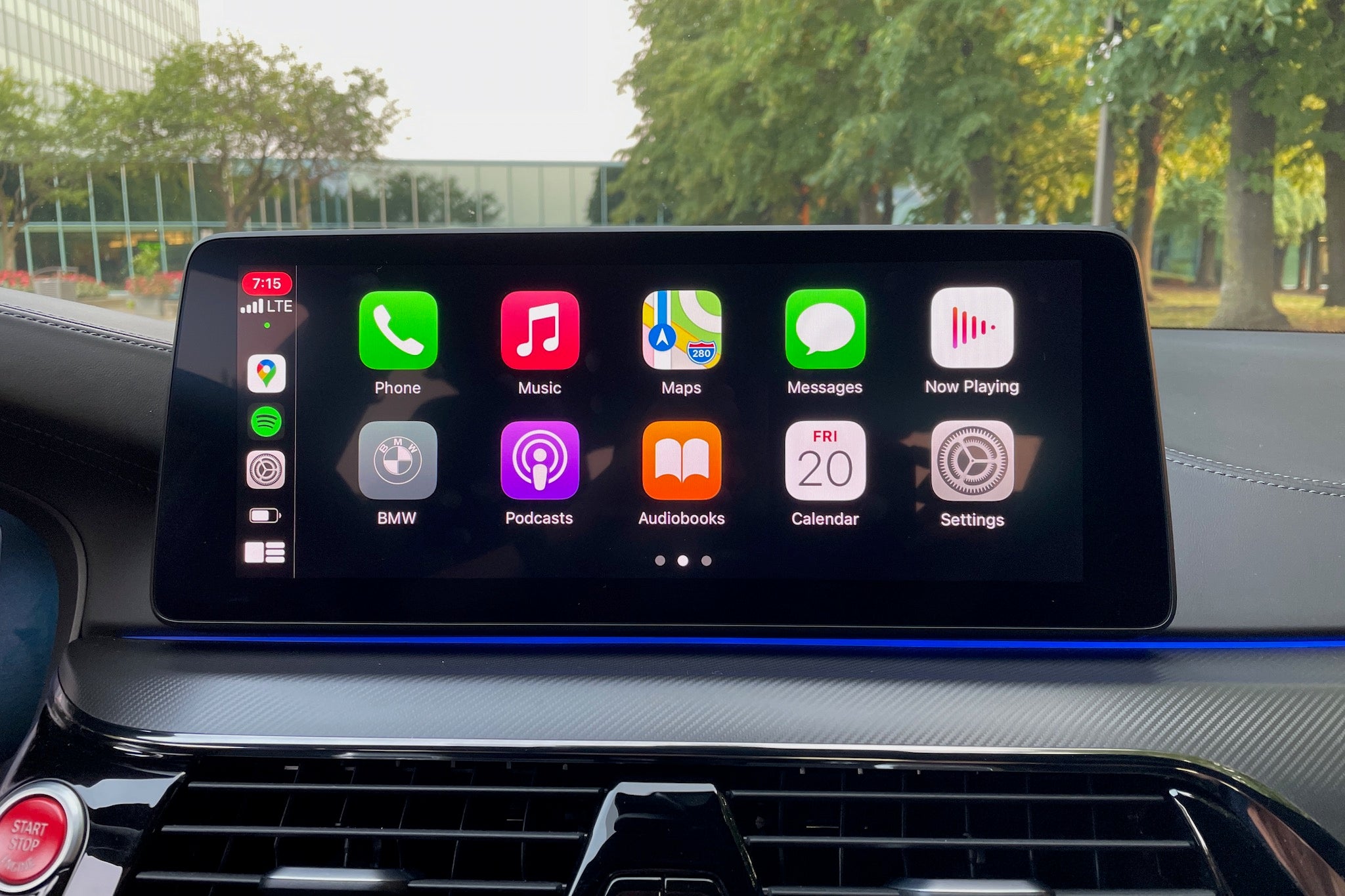 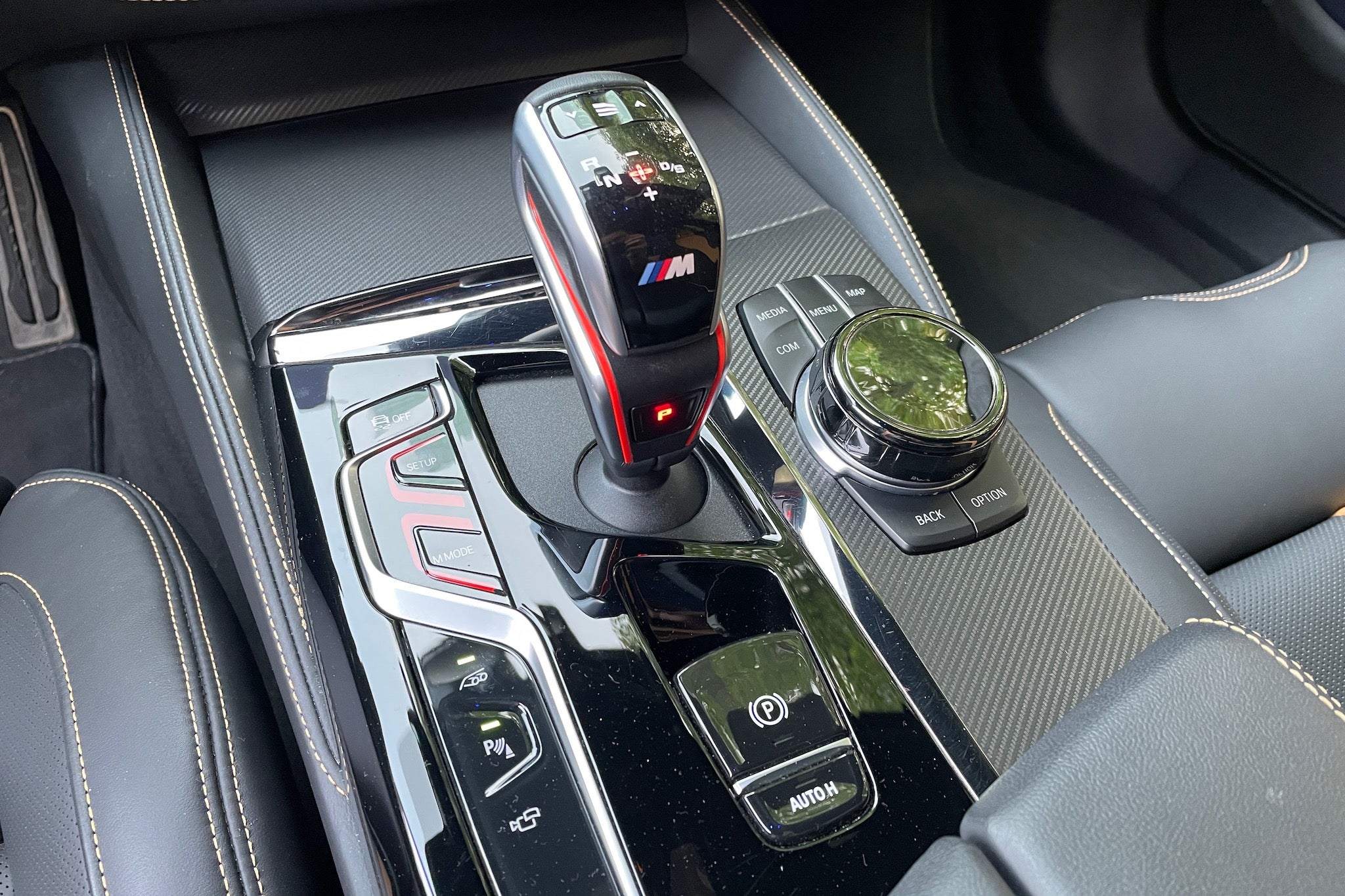 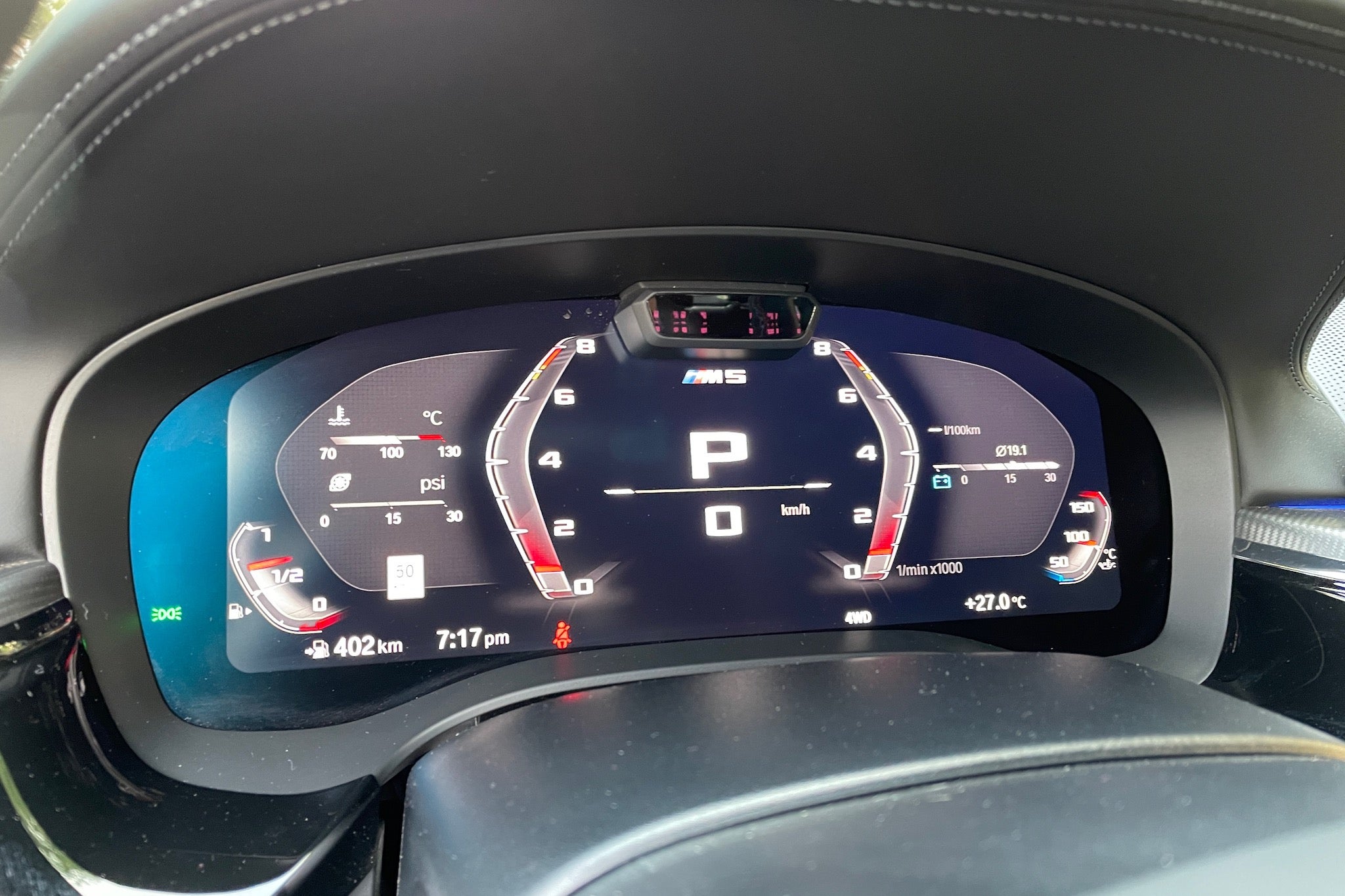 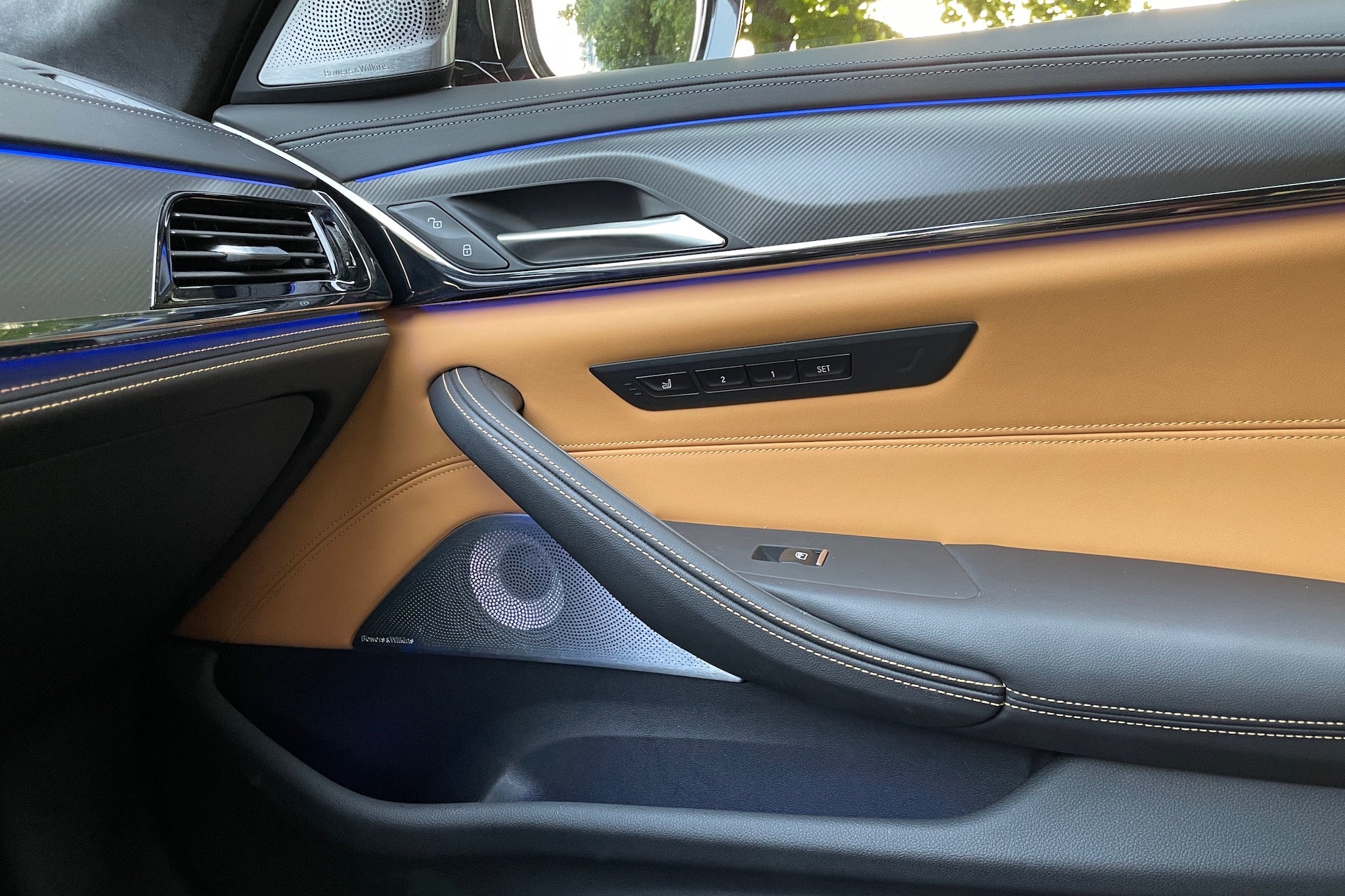 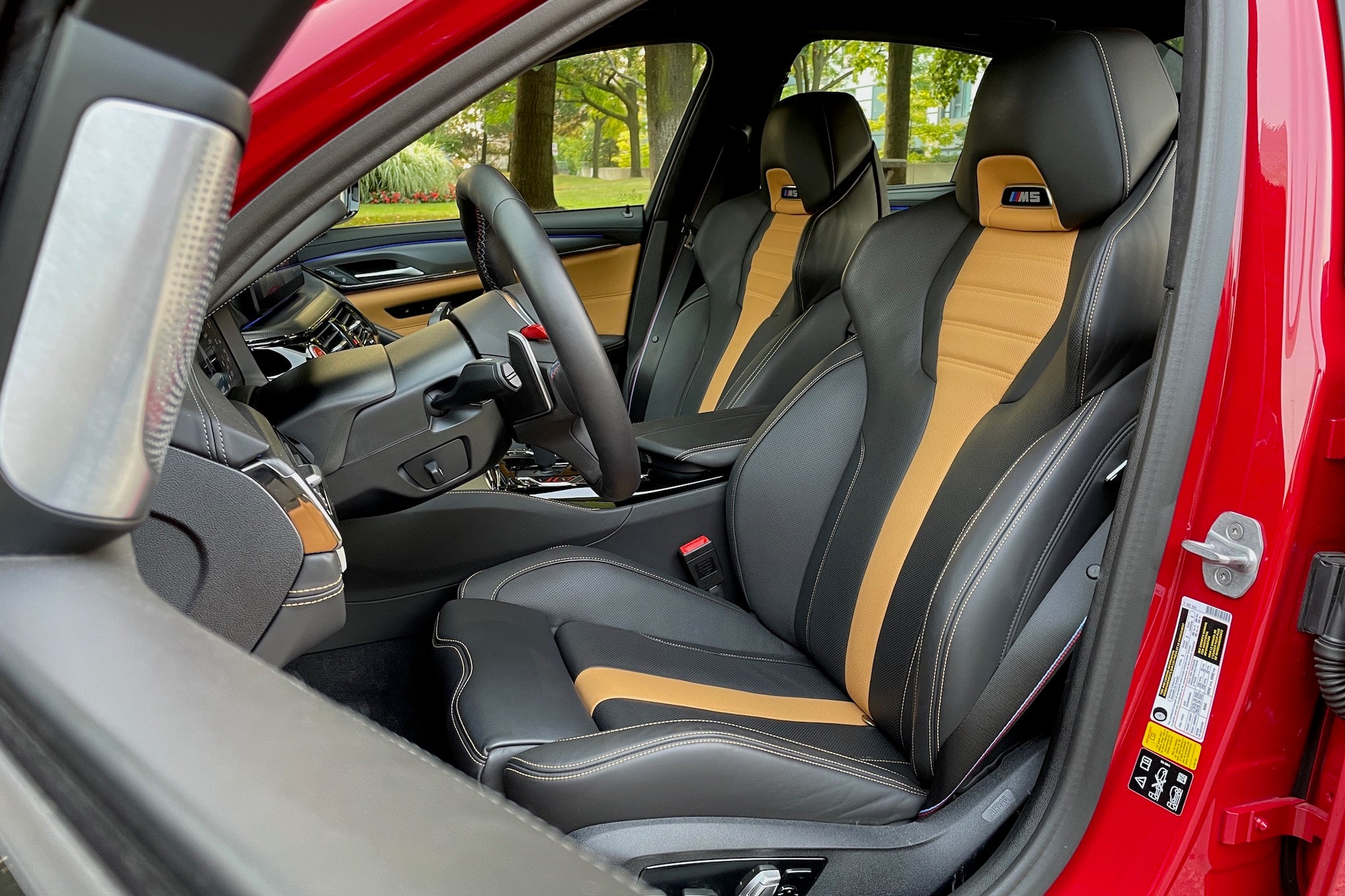 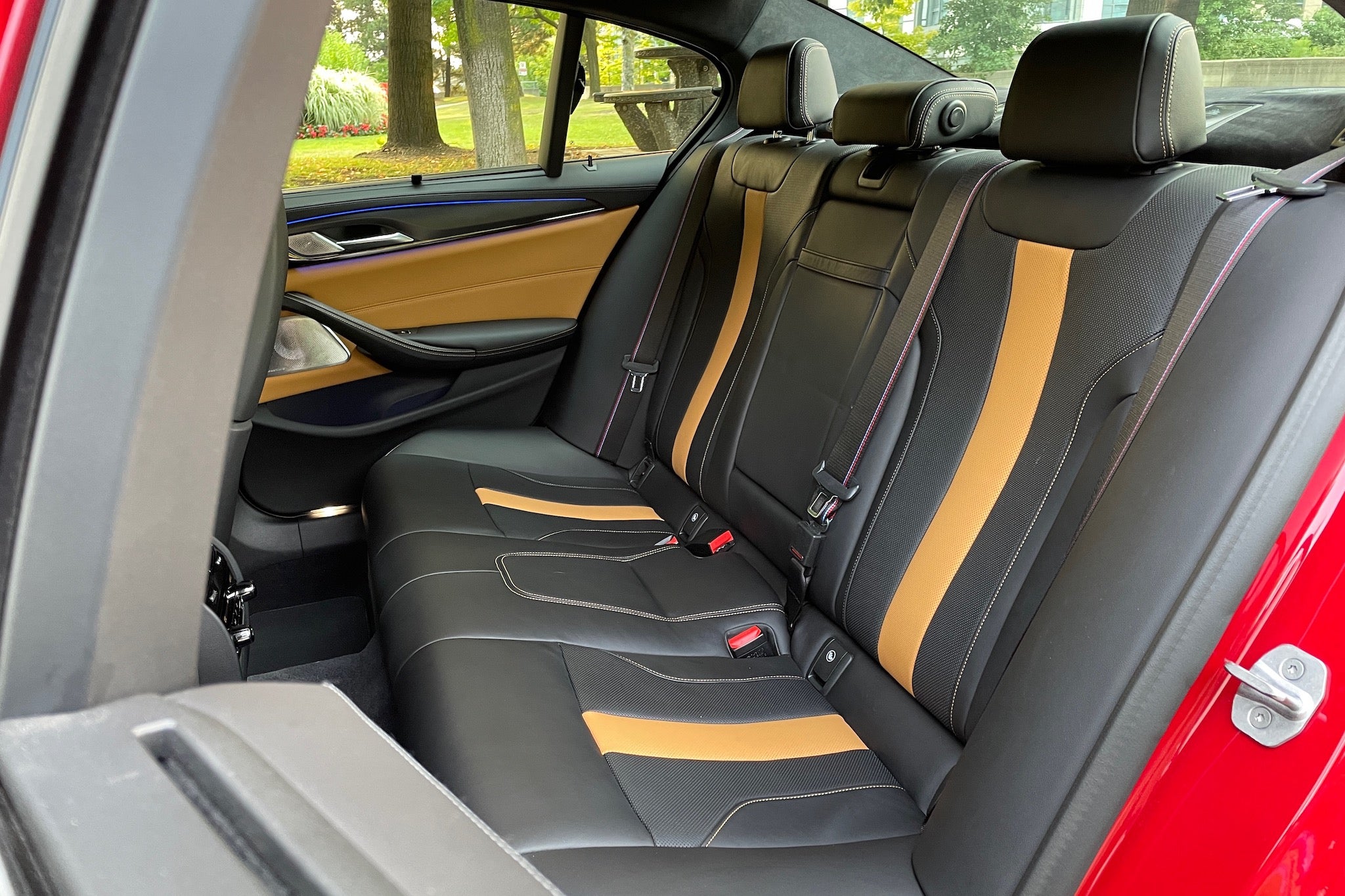 Some other interior-related qualms? The seats are supportively shaped and feature three-stage massage but aren't anything spectacular when it comes to outright comfort. They also don't lower quite enough to give you that hunkered-down sports-car-like feel. (Probably because this isn't an actual sports car, it just accelerates like one.) Rear seats, meanwhile, are adequately spacious for adult occupants in all areas.

Everything's surrounded by the car's own, 5 Series-specific interior (i.e. not the more chiseled-looking one that's been copy-and-pasted into every BMW, 4 Series-and-lower) that I actually really enjoy. The lines are softer and swoopier, resembling the cabin of the 7 Series more than anything, and it's just a pleasant place to be. Materials feel upscale, ambient lighting looks cool at night, the optional Bowers & Wilkins Diamond audio system is superb, and the build quality is rock solid. M5-specific cabin additions include standard carbon-look trim and a headliner made of Alcantara. Overall, the M5 feels like an expensive, quality product inside.

Cars competing for the funds of potential M5 Competition buyers include its eternal rival, the Mercedes-AMG E63 S, which is available in sedan or wagon form, as well as Audi's RS6 Avant and RS7, the former being a wagon and the latter being a "four-door coupe." The M5, meanwhile, is only made as a sedan, and one that sticks staunchly to the three-box format at that.

Performance-wise, while the Audis and Mercs all make do with 4.0-liter turbocharged V8s, the BMW's 4.4-liter means slightly greater power and speed. The 603-hp E-Class wagon and 591-horse RS6 both hit 60 mph in the mid-threes while the 617-hp M5 Competition gets there in 3.1. A 620-hp Porsche Panamera Turbo S, however, trumps them all with a run lasting just 2.9 seconds but also comes with a significantly higher price tag.

(And I'll add that at this price range, a Porsche Taycan or fast Tesla Model S of some sort may also be a compelling proposition if you're interested in breaking up with gasoline. None of those options will be wanting for speed.)

The 2021 BMW M5 Competition gets from zero to 60 mph in just 3.1 seconds. BMW's super sedan is quite the speed machine, there's no doubt about it.

Behind the wheel, however, y'know what the M5 feels like? It feels like the world's fastest, nicest, most expensive Honda Accord. And while that may sound like a slight, I mean it in all of the nicest ways as well. I like the Accord. The Accord is a great car. Honda sells tons of 'em. It feels nimble for its size and genre, is comfortable to drive in all situations, and is a dignified-looking, well-built family car for adults. But it's just not a fun car children lust after and put pictures of on their bedroom walls.

And, in the case of the Accord, that's fine. It wasn't made to be that car. The M5, taken at face value, fills that same niche for the upper class. It's seemingly been built for the mid-level executive to comfortably putter around in serene luxury and, when he or she is up for it, Autobahn-crushing pace. There's nothing inherently wrong with a car like that, especially when it comes to BMW's bottom line, but I'm not sure I'd call it an enthusiasts' car anymore.

In short, the BMW M5 Competition is a sensationally capable, expertly crafted tool, but a tool nonetheless. Maybe the M5 CS gets it right where the Competition doesn't, but that's a test for another day.

Got a question for the author about the M5 Comp? You can reach him here: chris.tsui@thedrive.com