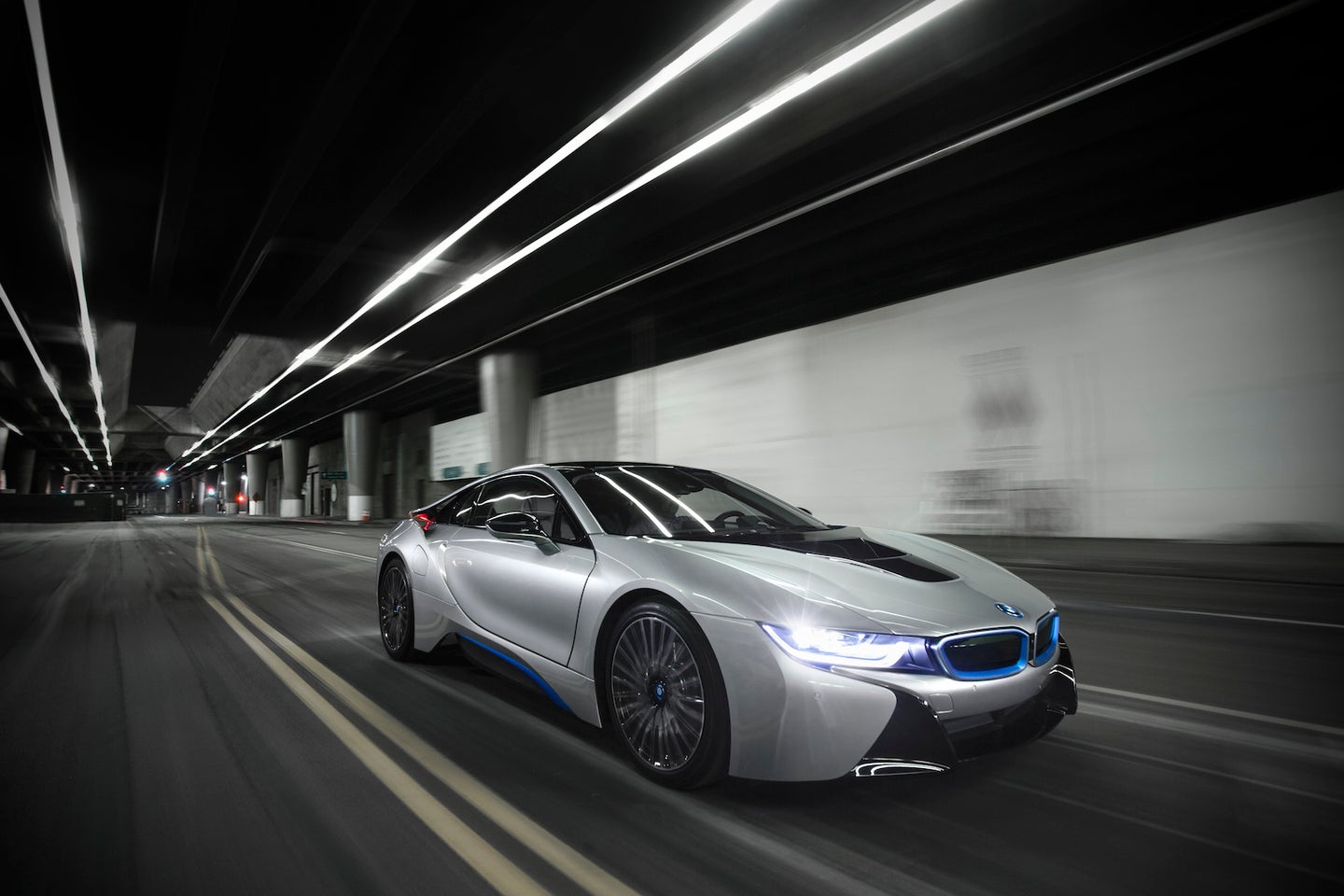 When its concept version was unveiled in 2009, the BMW i8 looked like an emissary from another, greener planet. Eight years later—eons in sports-car terms—the i8 remains a true original, a plug-in hybrid both of its time and ahead of its time.

When I first drove the i8 back in 2014, some critics suggested the i8’s design would not age well, because the car was so singular and of-the-moment. I argued that the opposite was true. The best future collectibles, I said, are relatively rare, beautifully designed and technically advanced, and evoke nostalgia for their era. Judging by the still-boggled reactions to the i8 I recently drove, I’d like to think I was right. At the Pebble Beach or Goodwood Revival of 2047, I suspect people will still be falling for this scissor-door flying saucer from Bavaria. And compared with the DeLorean—another “futuristic” car that’s often been juxtaposed against the i8—the BMW isn’t some phony, cobbled-together POS, but rather a powerhouse of modern tech and ingenuity.

My second date with the BMW began awkwardly. With the McLaren 650S on its way out, the Bimmer must be the industry’s trickiest car for ingress and egress. Between its A-pillar-hinged doors (part-scissor, part-gullwing) and incredibly tall doorsills, a Baryshnikov couldn’t make a graceful entrance. The muscle-straining exit is like climbing out of a rowboat. At least the lightweight doors, formed from carbon fiber, aluminum and molded plastic, open and close with strut-assisted ease. And like a gullwing Mercedes, the i8 wouldn’t be an i8 without them: Those rising portals still draw drooling crowds like Marilyn Monroe’s up-swinging skirt.

The show is less dramatic inside, though the BMW’s rich, leather-swaddled cabin still impresses. I dug the Tron-like strips of blue ambient lighting with matching blue seatbelts, the latter part of a $3,000 “Tera World” package. Thimble-sized rear seats and hatch space are another story. If BMW converts a second-generation i8 to a full EV by roughly 2022, as Automobile magazine reported, the elimination of the range-extending gasoline engine should dramatically improve the BMW’s poor interior packaging. I can only imagine what a trio of electric motors, delivering what Automobile claims is at least 750 horsepower, would do for performance.

Pressing the i8's start button, which triggers dash displays and a Star Trek synth hum—but no engine start-up—brought back the complexity of the all-wheel-drive Bimmer and its multifarious systems. Up front, an AC electric motor sends 129 horsepower to the front wheels through a two-speed transmission. Out back, the Mini-based 1.5-liter, three-cylinder turbo engine contributes 228 horsepower and 236 pound-feet to the rear wheels, including the shove from an integral electric motor and 22 psi of turbo boost. Full thrust requires shuttling the console shifter to Sport mode, which lights up the engine and declares all systems “go” for maximum attack. The grand total of 357 horsepower sounds less than grand, in this demonic era of 800-horsepower Dodges. But with its light-switch burst of electric torque, at a peak of 420 pound-feet, the BMW will zap to 60 mph in as little as 3.8 seconds.

Let Tesla fanboys scoff. The faster straight-line blast of a Model S, however magnificent, is its only parlor trick. Weighting a feathery 3,455 pounds—nearly 1,400 fewer than the Tesla—the BMW will carve a Model S like an electric turkey on any twisty road. In another on-paper stat, the BMW pulls only about 0.93 g of lateral grip in turns. But it feels more like flypaper in the real world—all the more remarkable considering the relatively slender tires, including 245/40/20s at the rear. In tandem with accurate but overly light steering, there’s an almost spooky lack of g-force feedback through those tires, but you quickly learn to trust the BMW’s adhesion: Credit adaptive shocks, slick tuning of the front multi-link and rear five-link suspension, and a center of gravity that feels down around your ankles. Instead of the spirit-dulling CVT transmission common to hybrids, the i8 lets you fire off changes via a conventional six-speed, paddle-shifted Aisin unit.

I had almost forgotten the i8's aggressive, distinctive sound, its almost alien blend of electric-motor whoosh and primal combustion pop. Yes, some synthetic engine notes are piped through the door speakers, so discreetly that most people will never differentiate it from the more-natural frequencies. But inside or outside the car, you’d never know a three-cylinder engine was at work: The BMW keens and rips like a sweet inline-six with its catalytic converter removed.

Sure, plenty of sports cars can do all that. Here’s what they can’t do: Roll away in the i8's eDrive or Eco Pro modes, and a gentle driver can coax out 22 all-electric miles. A jaunt to 60 mph takes about nine seconds in these modes, but between the satisfaction of running on pure electrons and the BMW’s silken, luxurious hum, it’s no big thing. Switch to Comfort mode, and now you’re recharging the 7.1-kilowatt-hour battery in flight.

The earth-friendly upshot is 76 mpge in hybrid operation, and an equally impressive 28 mpg on gasoline alone. The BMW, even in my rough-driving hands, tended to hover between 26 and 29 mpg in combined city/highway driving, a good one-third more efficient than sports cars of comparable haste. Charge the BMW every night and factor in those 22 all-electric miles at 76 mpge, and it’s game over.

Pocketing fuel savings might seem trivial in a sports car that starts from $141,695, and tagged $154,295 as equipped with options—including BMW’s $6,000 Laserlight system, whose speed-activated laser spotlights can illuminate more than 600 meters of the road ahead. But like Tesla’s models (the affordable Model 3 aside), the BMW was and is about proof-of-concept, the idea that electrified vehicles can be both thrilling and efficient.

The i8, as BMW spokesman Tom Plucinsky reminds us, was never meant to be a production car at all. It took a virtual flash mob of global fans to convince BMW to bring its Vision Efficient Dynamics Concept to market in showroom form. Initially, BMW said it would build no more than 500 i8s a year for buyers around the world. The company quickly changed its mind, though, and sold an impressive 2,265 in America alone in 2015, the first full year of production. Sales have dwindled of late, but a new 2018 i8 Roadster will break cover in November at the Los Angeles auto show, followed by a facelifted i8 doupe. Both may see a boost to roughly 420 horsepower, and perhaps a larger 10-kWh battery adopted from the i8 Formula E Safety Car. Wireless charging is another intriguing possibility.

When BMW announced in 2016 that its i Division—which also builds the electric i3 city car in Leipzig, Germany—would shift resources to autonomous cars, it appeared the company was scaling back its electric ambitions. BMW's Plucinsky said that’s not the case, and that the i8 continues to play a pioneering role.

“(The i8) has been a huge technical tour de force for us,” Plucinsky says. “It’s brought design elements to the market, and new technology to our lineup.”

The i8, he says, has helped spawn plug-in hybrid versions of the 3, 5 and 7 Series sedans, the X5 SUV, and now the Mini Countryman—the latter something of an i8 AWD system in reverse, with its transverse-mounted gas engine in front and electric motor at the rear. BMW is on pace to sell a record 100,000 electrified vehicles around the world in 2017, less than three percent of its total, but still steady growth. Next up are full-EV versions of the Mini in 2019, the X3 in 2020, and the semi-autonomous iNext in 2021.

I hate to refer to the i8 in the past tense, with the 2018 i8 Roadster on the near horizon. But ultimately (no pun intended), the BMW did was it was intended to do, delivering a solid dose of Ultimate Driving Machine while anticipating the dictates of our sports-car future. Like it or not, that balance of selfish desire with a more sophisticated, long-range sense of social responsibility is rapidly becoming the template for all performance cars.

The BMW’s hybrid sports car successors already include the Porsche 918 Spyder and Acura NSX. But I sense that it won’t be long before virtually every new Ferrari, Porsche, BMW, Audi, or Mercedes uses electricity to go faster, consume slower, and emit less pollution. At that point, even noble holdouts and traditionalists—Lamborghini, Aston Martin, Corvette, even Detroit muscle cars—will be compelled to follow.