After a brief electric bonus, Caddy's plug-in sedan shows us a piddling 24 mpg, costs $76,000. And you thought "Made in China" meant a sweet deal. 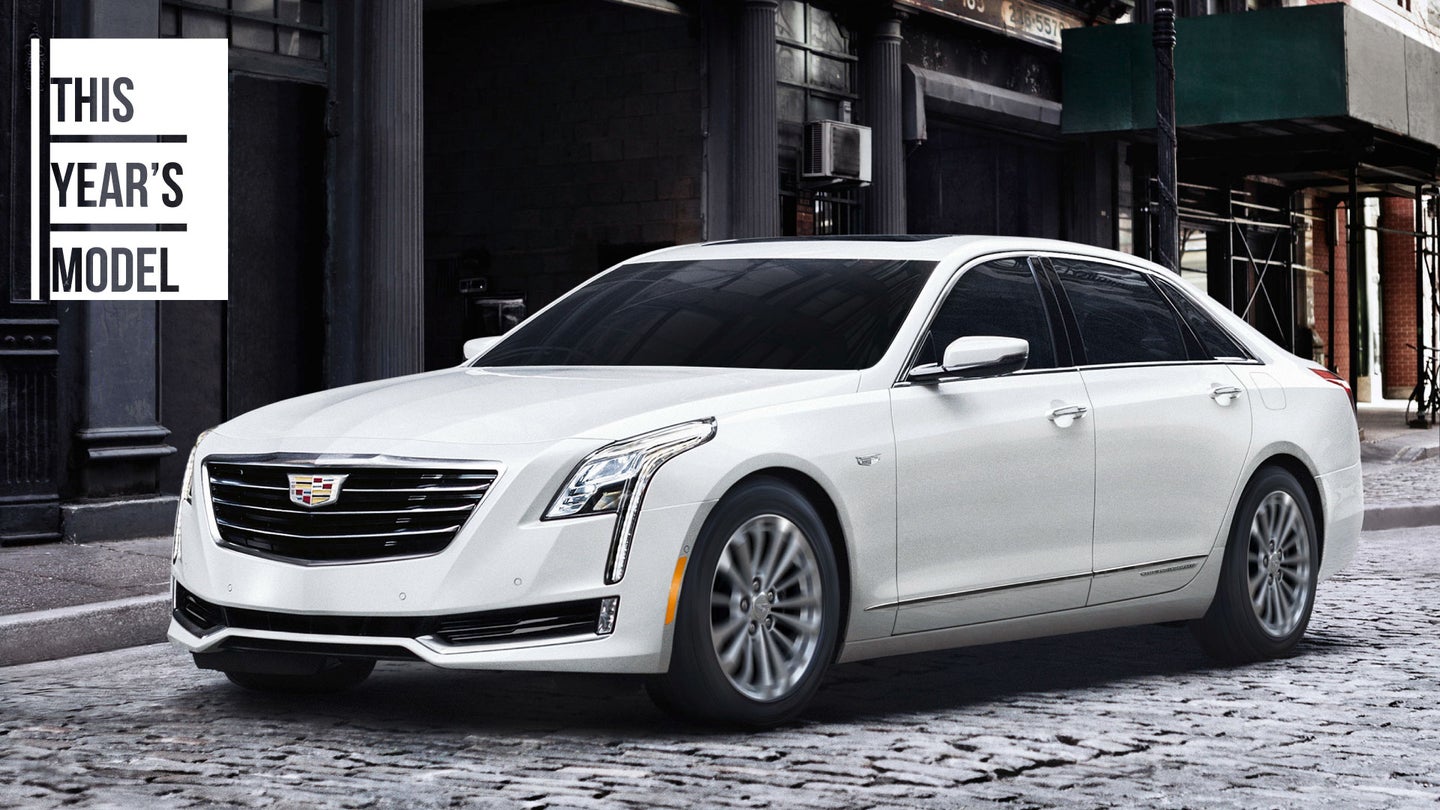 Hewing to hometown tradition, the Cadillac CT6 is built mainly in Detroit, in the same temporarily idled Detroit/Hamtramck Assembly Plant that produces the equally slow-selling Chevy Volt. But a new plug-in version of the CT6, the 2.0E hybrid, is built in Shanghai. The car is also booking a ticket to America, though it’s aimed largely at wealthy, tax-averse Chinese who the government is encouraging—you know, like a pep-talking reeducation camp—to switch to electrified cars.

Playing Party Leader myself, I’d encourage you to consider another version of the slick-driving CT6 instead; though something tells me that people will figure that out in less than 4.5 hours, the time it takes the Caddy to add an official 31 miles of all-electric range on a Level 2 charger. As for Cadillac parent General Motors: If you’re already struggling to sell $30,000 Chevy Volts and $40,000 Chevy Bolt EVs—as Americans enjoy another happy hour of guzzle-down fuel prices—you might want to think twice about offering a $76,000 plug-in Cadillac. Especially in a full-size sedan class that’s as popular right now as Hootie and the Blowfish CDs.

Once again, it seems GM can’t win for losing when it comes to electrified cars. Back in 2006, GM was eager to challenge Toyota’s total domination of the hybrid market. To great fanfare in Vienna, GM unveiled a would-be competitor, the so-called “Two-Mode” hybrid system, which it had quietly and jointly developed with BMW and DaimlerChrysler in a group called the Global Hybrid Cooperation.

Leave it to GM to screw things up, though at least they could cry in their beer with their German partners. Where Toyota was making hay with the small Prius, GM introduced the Two-Mode on its largest SUVs, in the midst of the Great Recession that would drive it into bankruptcy. First came the 2008 Chevy Tahoe/GMC Yukon siblings, followed by a Cadillac Escalade Hybrid, and finally the Chevy Silverado and GMC Sierra pickups.

In GM’s defense, this wasn’t an entirely misguided notion. For both owners and the nation, boosting the mileage of a guzzling SUV would potentially save far more fuel (and money) than improving the mileage of an economy car that doesn’t use much gas to begin with. Lifting a 15-mpg truck to 20 mpg saves twice as much gasoline, in gallons, as boosting a 30-mpg car to 40 mpg, the same percentage gain. It’s counterintuitive, but think about it: If one car burns a gallon of gas, and another vehicle burns 10 gallons over the same distance, then incremental gains in the guzzler become monumental. But coming off a huge oil and gasoline price shock that helped trigger the Recession, American consumers were having none of it—not least because these SUV’s produced meager real-world mileage gains. Whether from GM, Mercedes or BMW, the Two-Mode hybrids were an epic sales disaster, and the system became a punch line.

Why the history lesson? GM doesn’t like to talk about it for obvious reasons, but the hybrid systems in this Cadillac—updated with plugs and higher-capacity lithium-ion batteries that allow all-electric operation—is a direct technical descendants of the Two-Mode. And where an even more-robust hybrid unit works brilliantly in the smaller Volt, providing 53 easily obtainable miles of all-electric range, it doesn't translate as well to the larger, beefier, rear-drive-only Cadillac.

So how does it work? A powerful pair of electric motors, each spinning up 100 horsepower, mate via a complex planetary gearset to function like a CVT transmission. Those planetary gears blend or separate output from the electric motors and the 2.0-liter, four-cylinder turbo engine. A conventional four-speed, fixed-gear transmission sends power to the rear wheels. A sizable 18.4 kWh lithium-ion battery parks behind the back seat, using the same efficient, nickel-rich chemistry as the Chevy Bolt. The upshot is 335 horsepower and a burly 432 pound-feet of torque. The CT6 can reach 78 miles per hour on electricity alone, or 150 mph with the engine and electric motors working in tandem.

As ever, owners who plug in as religiously as a green St. Patrick may derive modest financial gain or balm for their conscience. After a drive from Brooklyn to Monticello Motor Club for two days of schooling in race-prepped BMW M2s, I connect the Cadillac to one of the track’s BMW-branded chargers. (For a brief moment, I feel like the guy who sneaks into a Yankees game wearing a Red Sox jersey, but no matter: Electricity doesn’t play favorites.) Departing MMC, I manage 25 electric miles, and another 23 during a full-battery test in Brooklyn and Manhattan. Neither test comes close to the federal estimate of 31 electric miles.

Those electron-only miles earn this Caddy a 68-mpge rating from the EPA. But once they’re depleted, the CT6 delivers its first booby prize: An EPA-rated 26 mpg in combined city/highway driving is a negligible 1-mpg gain over a gas-only CT6 with the same turbo four-cylinder engine. My real-world experience is worse, a piddling 24 mpg over several days of testing.

One thing hasn’t changed from the Two-Mode’s sorry past: Compared with a conventional powertrain, the hybrid system seems break-even at best in highway mileage, or even a net negative. The Caddy’s efficiency is sapped by having to drag around a 400-pound battery anchor at freeway speeds. Where the gas-only, four-pot CT6 weighs 3,893 pounds, lighter than anything in its class, this hybrid plops 4,530 pounds on the scales. Over a 120-mile, all-highway drive, I observe just 26 mpg. Seriously? I can whip that in at least two of the three gas-only CT6 models, including the four-banger that showed me up to 31 highway mpg. Even accounting for the all-electric bonus miles, one long drive ends up at an average 29 mpg. Big whoop.

Even beyond the “meh” fuel economy, the hybrid system also neuters what’s otherwise one of the more agile and satisfying handlers in its class, a large barge with the spirit of a smaller sport sedan. Naturally, Cadillac is pitching this as a performance hybrid, including a jaunty, 5.2-second surge from 0 to 60 mph. The car is clearly straight-line quick, passing dawdlers in Manhattan like they were standing still. Cruising the highway, the CT6’s inherent chassis goodness still shines through, with the buttery road manners of a top German sedan. I keep looking in my rear view mirror, wondering why no one is keeping up, and realize I'm doing 85 mph or more.

But between its complex electric-drive transmission, awkward handoffs between power sources, and that weight penalty, the system puts three layers of condoms between the driver and any hope of Jagger-esque satisfaction. On twisty roads in the Catskills, all that weight in the caboose plays hell with the Caddy’s usual athletic balance and handling.

This big four-door feels okay if you light-foot the throttle. But press beyond 50 percent of its travel, and after a long beat of indecision, the engine tends to awaken with a rude lurch, like the passed-out frat boy that you’re trying to kick off your couch. Even in all-electric mode, the Caddy is louder than top hybrids, beset by whining motors and whirring gears.

The CT6 also screws up one of the Bolt’s most charming features: The left-hand shift paddle that triggers regenerative braking, allowing you to whack the paddle while descending grades or entering curves, mimicking the feel of downshifting for natural engine braking. Instead, the Cadillac wastes two perfectly good paddles to simply toggle up-or-down between various levels of regenerative force. Only the mildest regen mode, Level 4, feels right. The stronger ones (which counterintuitively have lower 1-2-3 numbers) feel like they’re dragging the car even when you’re on throttle. It simply feels unnatural, and my hunch is that many owners will simply leave it in Level 4 and never touch the paddles again.

Hybrid sacrifices continue with a stingy trunk. Officially, it shrinks from 15 cubic feet in the standard CT6—already modest by class standards—to 11 cubes, but it feels smaller. For comparison, the trunk in the microscopic Fiat 500 measures 9.6 cubic feet. Two medium-sized rollerbags would stuff the Caddy full, and that alone might be a deal-killer in a car of this scale and price. I couldn’t help snickering when I opened this attenuated bin and found a plaque stuck to the suddenly proximate firewall: “High Energy Hybrid System Storage.” Some advice to Cadillac designers and marketers: If you’re going to brag about your hybrid battery, avoid advertising it on the exact spot where it’s stealing all the space.

If readers wonder why I’m throwing cold water on the Caddy—hopefully not while it’s plugged in—after warmly reviewing BMW’s plug-in 530e sedan, here’s why. First, the BMW sipped premium unleaded to the tune of 36 highway mpg, a crushing 10-mpg edge over the Cadillac. Its hybrid system isn’t as powerful as the CT6’s, with 248 horses and 310 pound-feet, yet it still gets from a stop to 60 mph in a brisk 5.8 seconds. The BMW’s hybrid system is smoother, quieter and more transparent, to boot. Oh, and the 530e starts from $53,305, $23,000 less than the Cadillac, and not a penny more than the gas-only 530i version.

Sure, the Cadillac is larger (though it feels no roomier inside) and better equipped at its base freight. It earns a $7,500 federal tax credit, versus $4,668 for the Bimmer. But even comparing prices between the CT6 hybrid and other CT6 versions underlines that the BMW is a screaming bargain within the 5 Series lineup. Relatively speaking, the Cadillac seems a dubious splurge.

Ultimately, this Cadillac is tripped up by a familiar hybrid problem, that of trying to walk a tightrope between performance and economy but leaning too far to one side. The whole “performance hybrid” thing tends to be an oxymoron anyway, as so many luxury brands have discovered—until they resolve to get it right.

Here's the deal: If I’m going out of my way to buy a hybrid, then dammit, I expect great mileage, no excuses. If performance comes along with it, that’s the gravy. As the corollary, if I'm focused on driving excitement in a CT6, or any car, then I’m buying the genuine performance model. In this case, that's the CT6 equipped with the best six-cylinder in GM’s century-plus history: The twin-turbo, 3.0-liter V6 with 404 horses and 400 pound-feet, mated to a conventional eight-speed, paddle-shifted automatic transmission. Honestly, I prefer any of the gas-only CT6’s to this pricey hybrid, including the straight-up 2.0-liter turbo four with 265 horsepower and 295 pound-feet (with a solid 22/30 mpg EPA rating), or the 3.6-liter V6.

That surprisingly peppy, four-cylinder CT6 starts from a reasonable $55,090—$20,000 less than this hybrid, which is offered in one lavish, take-it-or-leave it configuration. A CT6 with the 335-hp V6 starts at $57,090. For $66,190, you’re into the stonking twin-turbo V6 model, or its Premium Luxury trim for $70,290. The CT6 hybrid, after subtracting its generous tax credit, lines up closest to that at $68,590. And Cadillac clearly hopes you'll see the hybrid as a straight-up alternative to that range-topping twin-turbo version. But drive those cars back-to-back, and you'll find the definition of a false equivalency.

Despite a near-consensus of critical praise, that CT6 lineup has faced an chilly reception from Americans besotted with SUVs. Cadillac has only sold about 9,000 CT6s in 2017. It’s found five times as many buyers for the XT5 crossover, by far the brand’s most popular model. Hey, why not a hybrid version of that car instead? Lacking that, might you care to handicap the hybrid-hit potential of a $76,000 CT6 that’s built in China? Between that lofty price, scrawny luggage hold, and dispiriting economy, GM’s Shanghai operation might have better luck digging a hole to America than finding takers for the CT6 2.0E.