Enthusiasts have always cast a looming dark cloud over the S550 Ford Mustang EcoBoost, despite strong sales since its debut in 2015. This is rooted in the fact that it's not a V8, or even V6 Mustang. Instead, it possesses a much smaller turbocharged 2.3-liter four-cylinder under its massive muscular hood. But because it's a Mustang, and Ford knows what's up when it comes to modern performance tuning, the addition of a turbocharger provides new opportunities to turn that displacement frown upside down and make it a real performance beast in its own right.

That's why enthusiasts shouldn't be turned off by the presence of EcoBoost in the pony car's badging, and instead recognize that there are some solid ways to modify them. Not only can handling and grip be improved, the engine performance can be turned up as well. After all, the EcoBoost engine shaves around 200 pounds off the car’s front end compared to the GT equipped with the 5.0-liter V8.  That makes a big difference when it comes to steering feel, turn-in, and overall agility. Let's go over a few of these options and discuss why having four fewer cylinders and less than half the displacement of the 5.0-liter Coyote V8 isn't a bad thing at all.

There's no better indication that the Mustang EcoBoost can cram a lot of rubber beneath its fenders than the 265/40/19 tires that come on the 2022 EcoBoost High Performance Package with the EcoBoost Handling Package. That's a lot of rubber for 332-350 horsepower (depending on the upgrade package from the factory), especially when it only has 3,532 pounds (when equipped with the 6-speed manual gearbox) to push forward. This translates to higher cornering speeds, shorter braking distances, and an overall more stable and planted ride. More grip is always more fun, and oversteer is still very much a thing, too.

According to enthusiasts and websites that specialize in wheel and tire fitment, these cars can fit as much as a 305/30/20 on a 20X10.5 wheel on stock suspension, which is frankly massive. Though, it seems like a 275-wide tire on a diameter wheel that's closer to stock, on an 18X9 or 19X9 wheel, is more common among enthusiasts. Any of the usual players who offer a popular 200-treadwear tire, such as Falken with its Azenis RT660 or Yokohama's Advan A052, make it in this size.

Then, aftermarket suspension that allows wider wheels and more performance-oriented alignments with more negative camber can make fitment a lot easier and prevent tires from rubbing on the inside of the fenders.

Because the Ford Mustang is one of the longest-running enthusiast nameplates ever, with the S550 generation having been around since 2015, there are seemingly endless aftermarket suspension options available. It helps that Ford gave it a double-ball-joint independent MacPherson front and integral link independent rear suspension. With all things being equal, that will mean more grip and alignment customization over previous generations' live axle and far more basic MacPherson strut designs. I can attest to the fact that a stock S550 EcoBoost Mustang with the EcoBoost Handling Package is immense fun in the corners, so aftermarket tuning has an excellent base to work with.

Ford offers upgraded suspension from the factory in the EcoBoost Handling Package, but a similar or better setup can be achieved in the aftermarket quite easily, too. Especially if someone happens to pick up a used low-spec four-cylinder Mustang and would like to mimic this package's qualities. Used or new OEM parts from high-spec models can swap easily to a low-tier model, too, like upgraded brake calipers and rotors.

Kevin Gray, an enthusiast who frequently tracks his EcoBoost (shoutout to his father for sharing some excellent images), shared some cool insight about how the EcoBoost Mustang handles with adaptive dampers.

"MagneRide is good stock,” he said via Instagram message. “It is tunable with a DSC [Dynamic Suspension Control] controller which has custom tunes. Its off-the-shelf tune for the Mustang isn’t that great, however the professional tunes for the suspension from Race Data Engineering are a great option, and [after having one installed on my car] it handles amazingly now."

Though, it should be said that attempting to swap MagneRide adaptive dampers into a car that didn't come with them would be a herculean task, and sourcing quality passive dampers (Bilstein, Koni, etc.) from the aftermarket would be a much easier move.

The aftermarket has spring and sway bar kits, upgraded dampers, coilovers, brake upgrades, and even aerodynamic components. Retailers like CJ Pony Parts and Steeda have guides that cover all of this, too, as does GtMotorsports.org. Additionally, there are endless prime sources of setup information in forums, such as on the aptly named TrackMustangsOnline.com.

In the lowest spec, which is essentially Hertz rental car convertible status, the S550 Mustang EcoBoost produces 310 horsepower and 330 pound-feet or torque. Jumping up to the more recent optional Mustang EcoBoost High Performance Package, those figures expand to 332 horsepower and 350 pound-feet of torque. That type of power isn’t anything to scoff at and is plenty enough to scoot the 3,532-3,642-pound coupe forward at any enthusiastic pace.

But for those who refuse to keep their car's power output stock, there are a myriad of options that are bolstered by the EcoBoost's turbocharged design. Ford offers performance upgrades direct from the dealer service department that are 50-state legal, and the aftermarket hosts a wide variety of tuners who can squeeze extra power out of these potent four-cylinders.

Certain mods are also more vital than others, especially when it comes to bumping the boost and utilizing fuels with a higher ethanol content, according to Gray.

"A blow-off valve, internal wastegate, and even cold-air intake aren't needed, neither is a downpipe." Gray said. "All of these things just smooth out the power band and gain numbers that the butt dyno won’t notice."

"... Some key mods are a front mount intercooler, catch can, and a Cobb access port with an E30 tune. If you can’t get E30, look into water-methanol injection. This setup will pull on a stock Mustang GT and smoke them in the curves. For me, the best thing is it’s amazingly quick and easy to get good power out of. Plus, it's great on the road and track."

He also noted that the factory exhaust system, particularly the one that the EcoBoost High Performance Package with EcoBoost Handling Package gets, sounds really good from the factory, and I concur. A lot of this is echoed by tuners themselves. Jason Rooney of AntSpec has put in countless hours under the hood of these sprightly Fords.

"The engine itself has a lot of potential and is pretty stout stock, [but] I find that many people try to run way too much boost on them," Rooney said. "With a good intake and a front mount intercooler, I find about 24 psi is where you are going to find the best reliable power on 91 octane. … With an E30 blend, you can push it to 25 psi, but then you risk hardware failure for a minimal return, in my opinion. As with any direct-injected turbo car, they love ethanol power-wise, it's just the cam-driven pump that becomes an issue at higher ethanol levels."

EcoBoost ECUs are also a bit more complicated than usual, which makes sense given there's a lot going on to pull so much power out of such little displacement, as Rooney reports.

"It's a very complex ECU, and if you don't know what you're doing, it's easy to introduce small drivability gremlins and other weird behaviors,” he said. “It takes a while to fully understand the boost control system and the logic it uses, as it's based off of the pressure hitting the wastegate, not a target based system like many are used to." Rooney also noted that the ECU has boost targets, but that it is “more nebulous than most other systems.”

It's forever implanted in most peoples' brains that Mustang equals V8. But history has shown us that this hasn't always been the case, including some magnificent creations in professional motorsports of yore. And now, with all of these neat developments in squeezing very respectable power out of the modestly sized 2.3-liter EcoBoost, as well as taking advantage of a healthy drop in weight at the front end, it's definitely something to be celebrated instead of pooh-poohed.

Plus, the EcoBoost will return significantly better fuel economy than V8-equipped trims, which historically I've never been too concerned with, but as of late I think we've all seen as more and more of an upside. It's also still a rear-wheel-drive sports car with an available manual transmission, dressed up in a very handsome and muscular body, which ought to be celebrated in our era of enthusiast offerings becoming more and more rare as time goes by.

For more information on the S550 Mustang in general, check out our sister site Car Bibles for a comprehensive guide. 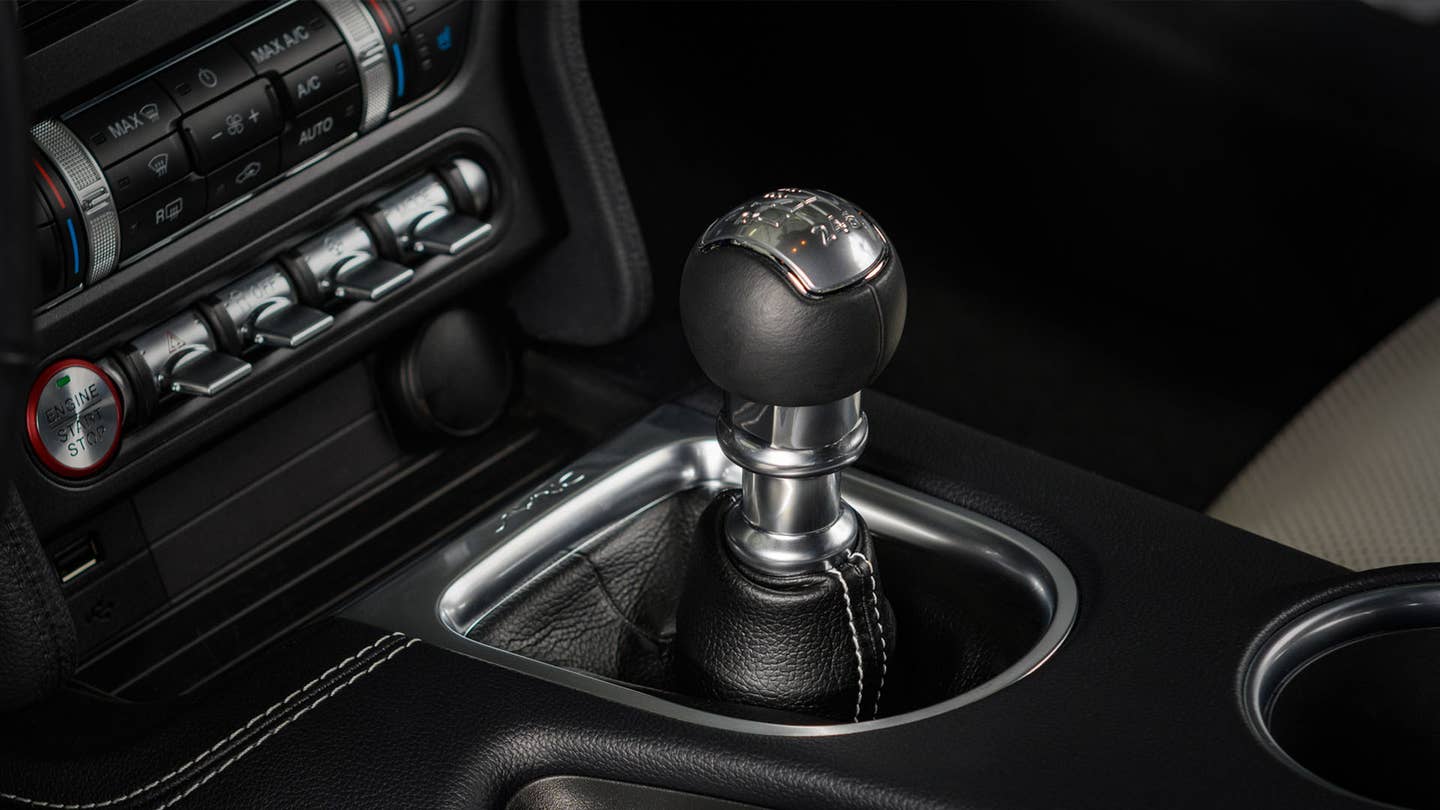 The Ford Mustang’s manual transmission will live on in the next-generation car coming soon. 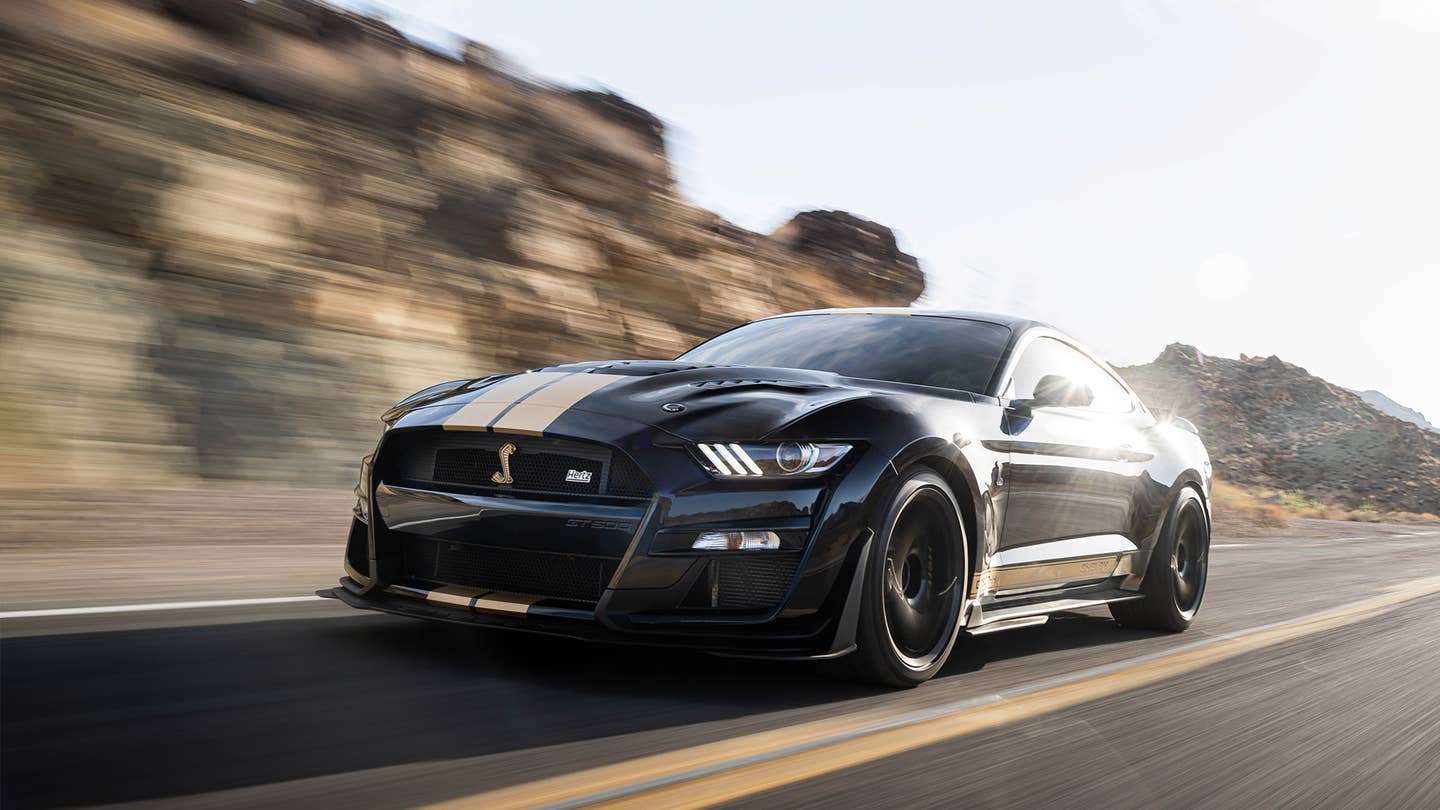 Keep an eye on your rearview mirror, either way. 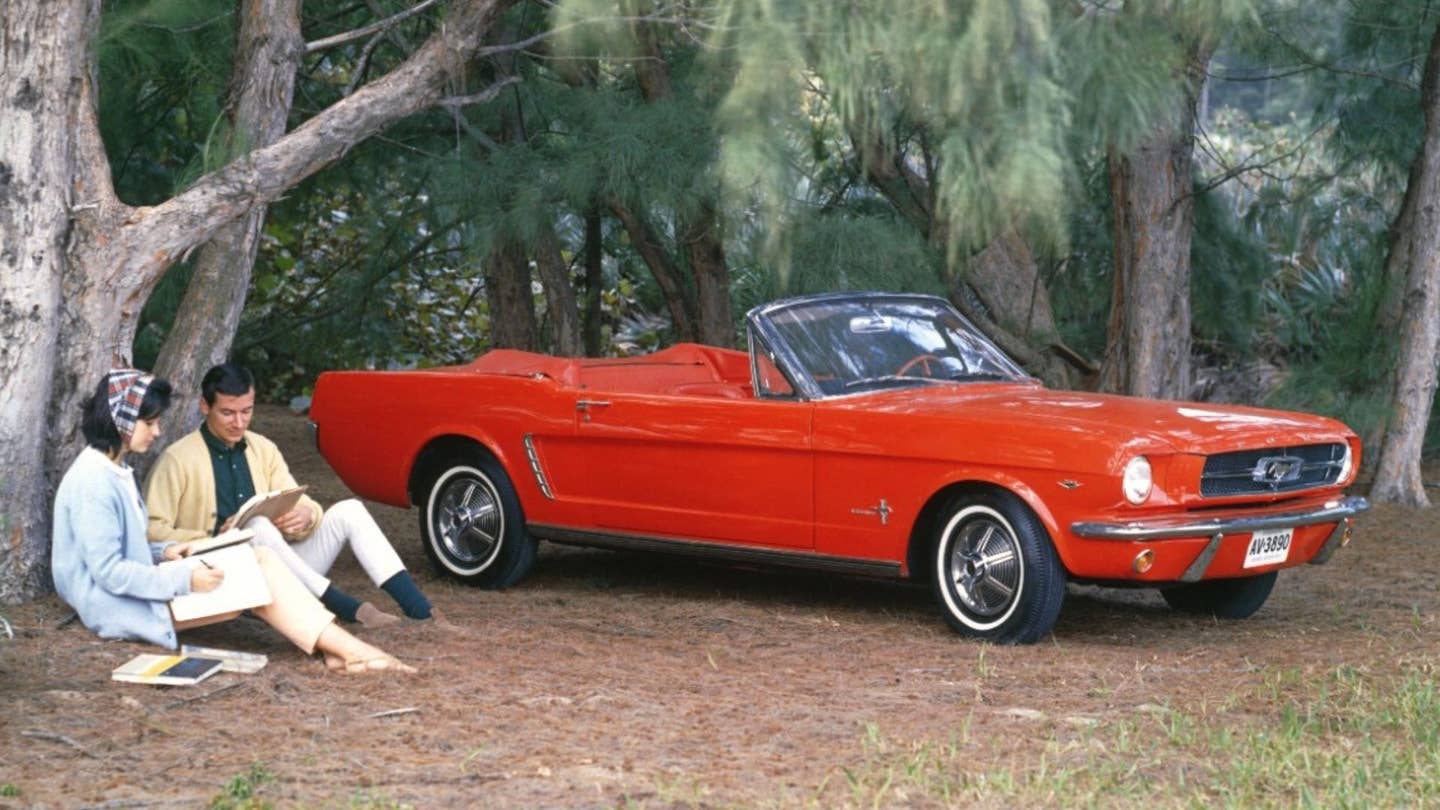 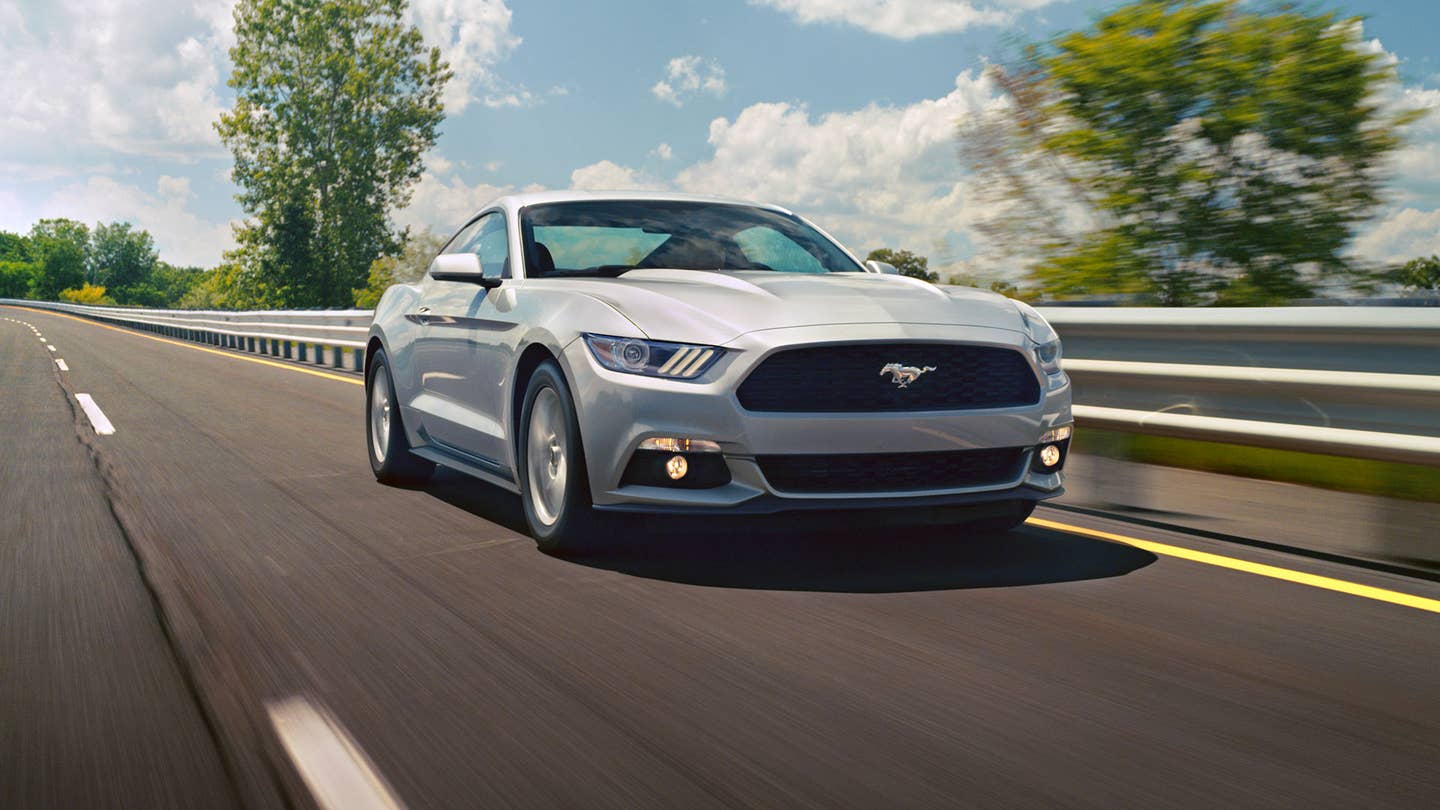