Nearly everyone can own a cool car, regardless of budget. Check out our list of the coolest cars you can buy for a deal in 2018. 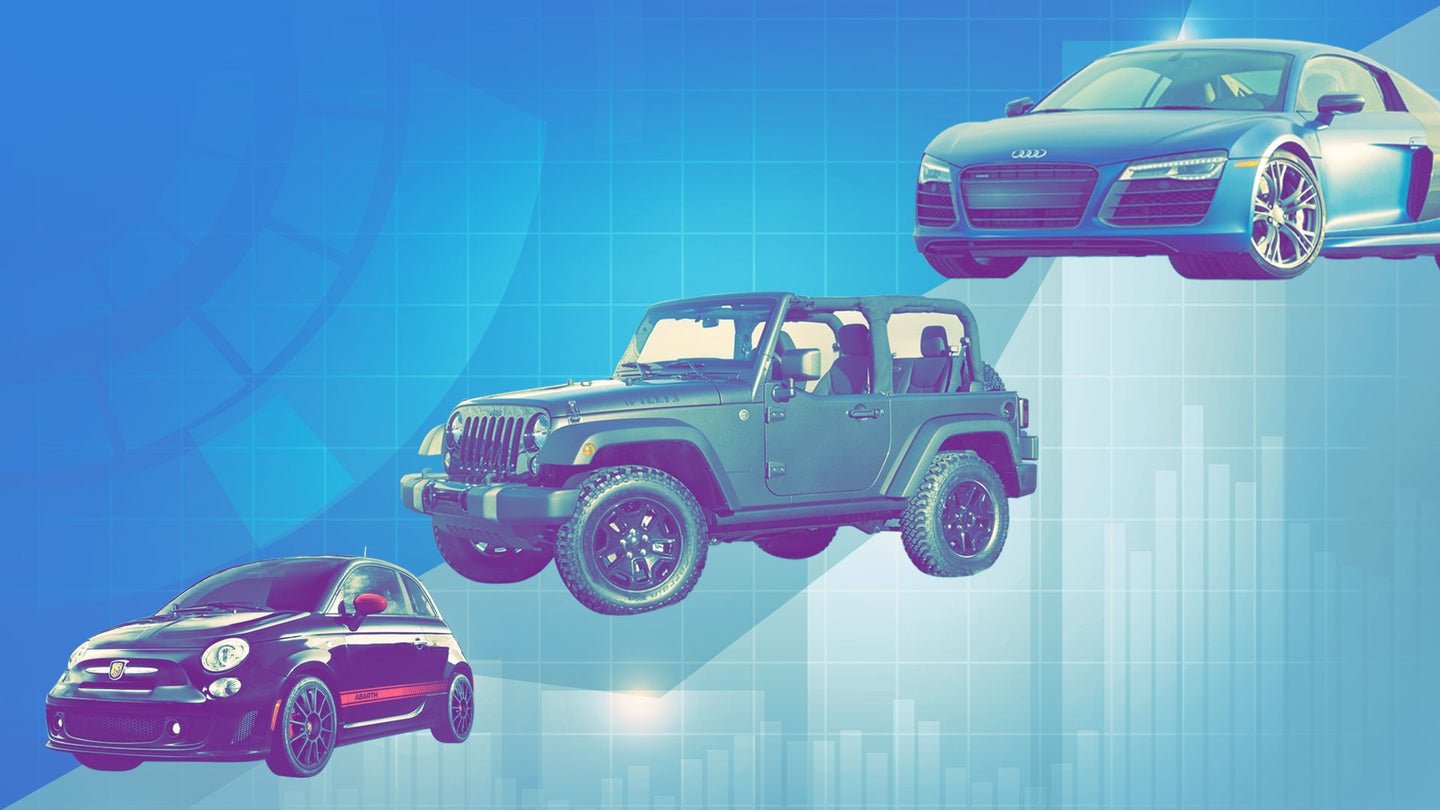 Cool cars come in all shapes and sizes. The good news is, cool cars also come at all different prices. You don’t need a million bucks to own a cool car since there are lots of choices at all different price points. Here, I’ve found a bunch of examples ranging from cool old cars to muscle cars to every day super cars. For ease of use, we'll break this list into six price points:

This is not a comprehensive list of all the cool cars out there, of course, but rather a starting point for discussion. Feel free to chime in the comments section with your own picks for cool cars at each price point.

The Fiat 500 Abarth is a car with a ton of personality that you can easily find for under $15,000. This zippy little hatchback is the perfect car for the city dweller: they're quick, peppy and a ton of fun to drive, which means you don’t have to spend Ferrari money to get a cool Italian car with a unique driving experience. This little spitfire is powered with a turbocharged 1.4-liter engine that’s constantly barking an aggressive exhaust note as its soundtrack.

Plus, Abarth vehicles are more rare, which ups the cool factor. And you'll have no trouble finding this one in the parking lot; its small-but-aggressive look sets it apart from other commuter cars. New, the Fiat 500 Abarth cars are under $30,000—which means a lightly used model will set you back much less. I found several examples of this cool car for under $15,000.

Along the lines of the Fiat 500 Abarth, the MINI Cooper is a blast to drive. Its compact design makes for a nimble car that can get you around town, fast, and parks pretty much anywhere. While high-performance variants are available, the base Mini Cooper model comes with a turbocharged three-cylinder engine—which helps keeps it under the $15K budget. Even with the small powerplant, it offers sharp handling, stellar fuel economy, and a retro styling that gives it a cult following.

If you’re lucky, you can find a cool, cheap car like the Mini Cooper S. Back in 2012, the S model offered 208 horsepower; that may not sound like a lot, but when you're talking about a car with a curb weight of only 2,535 pounds, that 208 hp packs a punch.

It’s tough to argue against the Mazda Miata as one of the best bangs for your performance buck. And even relatively new, this car can be had on the cheap. Its front-engine, rear-wheel-drive design allows for some serious fun on the street—or at the track. New Miatas can be had for $25,295, meaning that lightly-used models can be found fully loaded for under $20,000.

Miatas also have a huge aftermarket community with amazing parts available. I’m sure you’ve heard of LS-swapped Miatas tearing up a racetrack. There’s even a kit to swap in a Jaguar V6. That doesn’t mean you’ll need to, because the 2015 model in Sport trim packed a 167-horsepower, 2.0-liter engine in a car that weighed under 2,500 pounds. The car's impeccable balance and always-excellent five-speed manual transmission makes these cool little cars quite desirable for driving purists.

The Civic Si is the perfect example of a cool car that's also practical. Nobody will ever accuse you of spending too much money on a car like the Civic, no matter how red it is. To the untrained eye, they won’t even realize you’ve opted for the sporty Si version—until the V-Tech kicks in, that is. In 2015, the 2.4-liter, naturally-aspirated inline four engine pushed out 205 horsepower and was mated to a six-speed manual transmission, allowing you to zip around town and still get over 30 miles to the gallon on the highway.

The slick exterior is cool, but some of the sportier touches, like black-and-red seat inserts and a blind-spot camera, are found inside. The radio could use a little bit of work, but that’s an easy fix for this fun, sporty car that clocks in under $20,000.

Wranglers are just cool cars, no matter how you slice it. What other car lets you run errands, trudge through snow, march over mountains, and bounce to the beach? It’s got a sweet soft top that you can take down during the summer months; during the winter, the rugged four-wheel-drive keeps you headed in the right direction.

Not only can you ditch the roof, but the Wrangler is full of plenty of cool, rugged features that let you pop off the doors or fold down the windshield. Plus, the Jeep Wrangler is an automotive icon that will never go out of style. In my hunt, I found plenty of examples with less than 50,000 miles, all for under $30,000.

This car holds a place in my heart, because the first car I ever bought for myself was a SN95 Mustang GT. At the top of Mustang mountain sits the “Terminator” Cobra. This was Ford Special Vehicle Team’s answer to all those trolling Corvettes and Vipers. This mustang came with a supercharged, 32-valve dual-overhead cam with 4.6 liters of displacement. The modular V8 was good for 390 horsepower from the factory (although most people will tell you that number was really closer to 420).

With a pully change and tune, this car would easily get in the 500-horsepower range. Power is sent through six-speed manual transmission and on to Ford’s bulletproof, 8.8-inch rear end. Independent rear suspension helped keep the car planted on turns. This was a formidable car, an instant classic, and a cool muscle car you can have, right now, for under $30,000.

It's rude to mention cool muscle cars like the 03/04 Terminator Cobra without introducing its hulky younger brother. The 2013 Ford Shelby GT500 took performance up a notch, with Ford deciding that a supercharged, 5.4-liter V8 wasn’t enough. So they increased displacement to 5.8-liters, helping to push the power numbers to an asphalt-buckling 662 horsepower with 631 pound-feet of torque.

At the time it was introduced, the GT500 was the most powerful production car made in America. It was a fitting tribute to the legendary late race car driver, the great Carroll Shelby. The original MSRP on this collector’s item was $55,445. Finding one under $40,000 nowadays is its own kind of victory, but I found quite a few for sale in that price range.

People are raving about the Kia Stinger. Some automotive journalists called for it to be named 2018 North American Car of the Year. What makes this new Kia such a cool car? The Stinger is a truly sports sedan with enough luxury to feasibly grab market share from upscale stalwarts like BMW’s 4 Series and the Mercedes-Benz C-Class. It’s the underdog with a chip on its shoulder and something to prove. (We like rooting for the underdogs.)

Sure, you can spend more money on a fully-loaded Audi, but at this point the Stinger is more unique. The Stinger helps announce Kia’s arrival as a force to be reckoned with in the upscale sports sedan category. The car helps separate Kia from its onetime "cheap commuter car" image. The Stinger comes with a 365-horsepower, twin-turbo V6 capable of taking it from zero to 60 mph in just 4.7 seconds.

It’s hard to believe that the onetime top of the Mercedes line can be had for a fraction of its original, $216,425 price tag. And while repair bill horror stories caused many to shy away from this badass car, consider the amazing, pillar-less design: no B-pillar where the doors close; instead, two long, sweeping windows that give you a convertible-like feeling every time you put them down.

The CL65 was a top-of-the-line vehicle, and as such, gives you everything you'd expect from a $200,000 car. The cool features and acessories include night vision, a quilted-leather interior, and an air-conditioned console for your drinks. Then there’s the hand-built, twin-turbo AMG V12 engine. The 6.0-liter beast produces 604 horsepower and a mind-bending 738-pound feet of torque—the ultimate expression of luxury and power in a single serving. You’re not going to find these at a CarMax near you, but do some hunting and you can find this cool car for under $50,000, and with low miles.

Is it practical? No. Is it comfortable? Nope. Is it cool? Absolutely. If you haven’t had the chance to feast your eyes on this cool car—let alone drive one—do yourself a favor and go find one. The Alfa Romeo 4C is a beautiful car with sharp Italian styling and an exotic sound. Open the doors and you’ll see the race-inspired carbon fiber monocoque that surrounds the cabin. The interior is bare-bones and cramped for big guys, but the sex-bomb sports car isn't about a plush ride; it's about the dialed-in driving experience.

This car is among the lightest modern cars you’ll ever see in the wild. The vehicle weighs just 2,465 pounds, but packs a 237-horsepower engine capable of taking it from zero to 60 mph in only 4.2 seconds. It’s like driving around a little Ferrari, and its uniqueness makes it one of the coolest cars for sale today.

The year 2016 marked the second-generation Audi R8—and the car did not disappoint. The refresh brought with it a more aggressive front grille and an updated architecture shared with the smash-hit Lamborghini Huracán. It also shares that car's glorious V-10, mounted behind your head. It comes in two versions: one with 540 horsepower and 398 pound-feet of torque, and another with 610 horsepower and 413 pound-feet. That means that late versions of the first-generation model can be had on the cheap. While you can't touch a second-gen model for under $140,000 or so, there are plenty of 2015 model-year cars for under $100,000.

This is a car so cool, Iron Man drives one. If it’s sexy enough for Iron Man, it’s a dope enough car for me. The R8 is all-wheel-drive and features fully variable front- and rear torque distribution. Maybe the coolest interior feature here is Audi’s “Virtual Cockpit,” an all-encompassing display positioned in front of the driver, to give her information on demand. It includes crisp navigation screens powered by Google maps.

Now I just feel like I’m cheating. Give me $100,000 to buy a cool car, and I’m going straight to my Chevy dealer to land myself the Chevy Corvette Z06. Not only will $100,000 get you in an insane performance car like the Vette, but you’ll get one that’s nearly fully loaded. Brand new, you can walk away with a no-joke track specialist that has heated and cooled seats, a head-up display, navigation, an onboard performance-data recorder, and carbon ceramic brakes. Let that marinate for a second. You get a car that not only has, but actually deserves, carbon ceramic brakes, for under $100,000. Other cars that fit that description: the (much) higher-priced McLaren 720S and Ferrari 488.

And there’s something so sweet about having a cool car made by an American company. The Z06 is a road-going version of the 2015 Le Mans-winning C7R. You can choose from a seven-speed manual or the eight-speed paddle-shift automatic. The Z06 is powered by a 6.2-liter supercharged V8 that pushes out 650 horsepower and 650 pound-feet of torque.