Check out our list of the best SUVs this year including our rankings for the top-rated SUVs by size, gas mileage, luxury and safety. 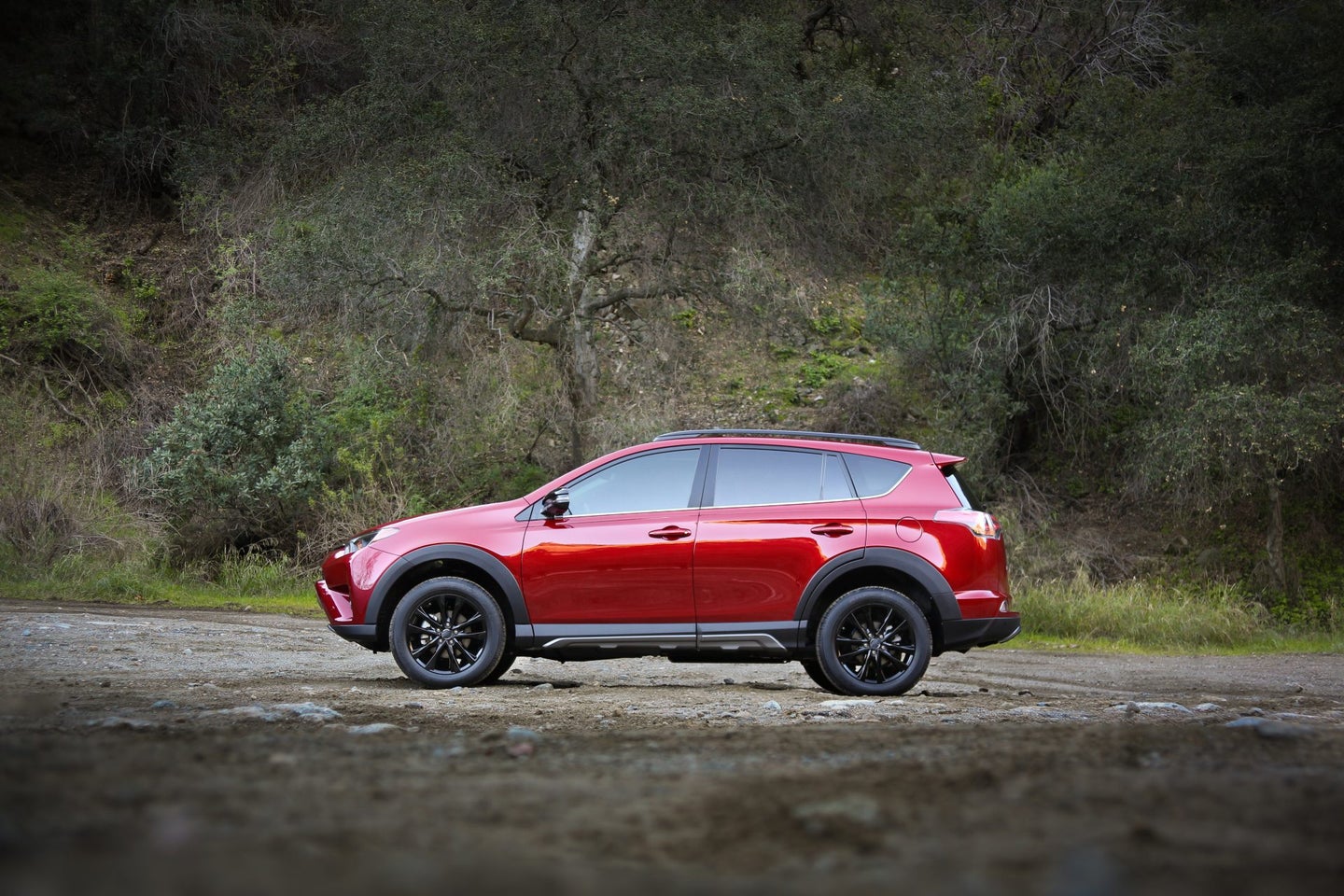 Ahh, yes, the Sport Utility Vehicle. SUVs were once a welcome addition to the American marketplace, helping to fill the gap between the family station wagon and the sketchy windowless van or Uncle Charlie’s smelly old pickup truck. SUVs have been around since the 1940s with the Willys Jeep Station Wagon but really didn’t hit their stride until the heydays of 1990s excess, when low gas prices made it okay to get 12 miles per gallon in your Chevy Suburban. Since then, SUVs have evolved into their own genre of vehicle. There are small SUVs, large SUVs, crossover SUVs, compact crossover SUVs, luxury SUVs, SUVs with a third row, seven-passenger SUVs, SUVs with great gas mileage, hybrid SUVs, the list goes on and on.

Could there be any other? Honda’s taken the crown in the compact SUV market for years. Its formula is rather simple: Make reliable cars with intuitive gadgetry at a fair price. It’s the reason why you can’t drive two blocks without coming across one. It’s also the reason why the CR-V is constantly bringing home the heavy hardware in the form of awards for being the best SUV year in and year out. It’s not exactly the car that you’re going to do stunts with at the club, but by the time you get one, your clubbing days will be long behind you.

A fully-loaded CR-V will only set you back a shade more than $34,000. With it, you get all of Honda’s driver-assists including Lane Keeping Assist, Blind Spot Info, Lane Departure Warning and Collision-Mitgating Braking. This year’s model snatches the crown of best small SUV after a facelift from last year. More cabin space and power this year helped the CR-V become the best small SUV.

Come on, you have to like the Model X. I mean, those doors. And who doesn’t love screaming down the road with a zero-to-60 time of 2.9 seconds. That’s right, Becky, not only can you fire through that Starbucks drive-through in style in the best midsize SUV, but you’ll be doing it in an SUV that can blow the doors off a Lambo.

The range on the Model X is 295 miles, allowing you to be the coolest soccer mom on the planet. You can even have it fitted to comfortably seat seven adults. It’s no show-pony either, you can even take the best midsize SUV off-road. Although I’m sure most drivers stick to suburban streets. The Model X starts at $79,500.

You got to come and take the crown of best large SUV from the Range Rover. The newest Range Rover flagship represents everything you’d want from the best large SUV, with a luxurious interior, neat gadgetry, and a hulking, powerful engine. If you ask The Drive editor Mike Guy, Range Rover makes “the best SUV in the world.” After checking out this latest model, it’s hard to argue. It also comes with a large price tag, starting at $85,650.

This last model was a mid-cycle refresh, giving the best large SUV a new headlight and grille combo, new LED taillights, wider exhaust pipes, a two-screen infotainment setup and a suite of backseat tech additions. That means last year, the best large SUV just got that much better.

This gets a little tricky here for a few reasons. First, finding a best gas mileage SUV in the day and age of electric cars is strange. I felt that choosing an all-electric vehicle would be cheating. Second, I didn’t feel like naming the smallest hybrid the best gas mileage SUV worked either. Here the $41,995 Chrysler Pacifica Hybrid gives you plenty of size, great gas mileage and an option to go “all-electric” while still having a gas tank.

The Pacifica is a plug-in hybrid, which means you can charge it up in your garage at home and hit the streets in all-electric mode. Granted, the all-electric range is only 33 miles, but that should be enough to get you to the gas pump. With a full tank and a full battery, the Pacifica gets the equivalent of 84 miles per gallon, making it the best gas mileage SUV.

Those Scandinavians are known for minimalist furniture, great meatballs, and safe cars. It should come as no surprise that the safest SUV on the market comes from Volvo. The company has said that, by 2020, no one would be killed or seriously injured in a new Volvo. If that’s just marketing, it’s brilliant, and if it’s truly altruistic in nature it’s even better. Either way, the Volvo XC90 is packed with safety features from its ultra-strength steel to its front crash prevention system.

The XC90’S City Safety feature is a system to detect pedestrians and cyclists while you’re cruising in urban areas. Not only does the feature alert drivers to people in the area, it will automatically apply the brakes if the driver doesn’t react in time. There is also a rear collision warning system that uses radar to determine whether you’re about to get rear-ended. The system then tenses up your seatbelts and applies the brakes to stop the SUV from crashing into whatever’s in front of it. The XC90 is also the king of crash tests, proving, once again, that it’s the safest SUV. The Volvo XC90 starts at $45,750.

That’s right, the Navigator is back! Rappers must be delighted. The best SUV of the early 2000s is back with a vengeance. The black label treatment from Lincoln takes luxury to a new level. You can even get it decked out in a trim called “Yacht Club.” In terms of luxury, this may become the best large SUV on the market.

This is the year that the Navigator "shakes off the old guy image." It’s modern, it’s plush, it’s gorgeous. Everything you’d want to see from the ultimate in luxury. And the exterior with the imposing new grille from Lincoln adds a certain dramatic flair. The new Navigator starts at $63,515.

The RX 450H has sleek styling to go along with 31 miles per gallon in the city. The all-wheel-drive SUV comes with Lexus’ electronically-controlled Continuously Variable Transmission or ECVT. The RX 450h starts at $53.035, making it almost $10k more expensive than the best-selling RX 350. You can add a panoramic moonroof, hands-free power liftgate, 360-degree camera and a 15-speaker sound system if you want to pack the best hybrid SUV to the gills.

The title of best family SUV has to go to the Honda Pilot. The big brother of the CR-V is at the top of the list of best SUVs to buy each year. The Pilot comes in five different trim packages from a two-wheel drive LX priced at $30,900 all the way up to the all-wheel-drive Elite unit for $47,470.

Just wait til the VTEC kicks in yo! The Pilot comes with a 3.5-liter, direct-injected i-VTEC V6 with variable cylinder management. That gives the best family SUV 280 horsepower to go along with 262 pound-feet of torque. The power is delivered through your choice of a six-speed or nine-speed automatic transmission.

If you like the Hondas you’ve got to love the Acura right? I mean, it’s a Honda with leather! There’s much more to the MDX here. The Sport Hybrid model shares part of its drivetrain with the latest NSX supercar. Two electric motors can send up to 72 horsepower to either or both rear wheels to help supplement the V6 engine. It makes the MDX Sport Hybrid a swift, nimble and very agile SUV for its size.

You don’t have to spring for the 321-horsepower Sport Hybrid model to appreciate the MDX line. If you’re looking for the best three-row SUV, obviously you’re carrying some precious cargo. The Acura MDX has a five-star overall safety rating from the National Highway Traffic Safety Administration, also ranking it among the safest SUVs on the market today. The base model starts at $44,050.

This little Subaru is no joke. Several outlets have named the Crosstrek the best crossover SUV. Here, when I say best crossover SUV, I basically mean the best lifted hatchback. Crossover SUVs are like little guys with Napoleonic complexes that puff up their chests. Maybe not the guy you want to hang out with at the local sports bar, but it makes for one heck of an automobile. The Crosstrek is so capable, it’s even been in the Baja 500.

Built on the same platform as the Impreza, the Crosstrek can be had with a manual transmission, instantly making it way cooler than 90 percent of the crossovers out there. The top “Limited” trim package gets you a 6.5-inch infotainment system, Subaru’s “Starlink” connected service, heated front seats and mirrors, keyless entry with push-button start, headlights that swivel when turning, and 18-inch wheels. All this comes with a price tag of only $26,295. There’s one catch though. You have to give up the manual transmission in the top trim on the best crossover SUV.

A brand with legendary reliability naturally makes the most reliable SUV. It’s a tough contest with competition from Honda, Nissan, and even GMC. The Toyota RAV4 has consistently been one of the most reliable cars on the road since it’s introduction in 1996. My sister had a RAV4 that lasted 200,000 miles until the transmission blew up. Even then, the motor ran like a top. More than 90 percent of RAV4s sold in the 10 ten years are still on the road today.

The RAV4 comes with a bullet-proof 2.5-liter four-cylinder naturally-aspirated engine pumping out 176 horsepower and 172 pound-feet of torque. No turbo, no direct injection, just the most reliable SUV money can buy. And it won’t take too much money either, as the most reliable SUV can be had for the modest sum of $24,410 brand new.

If you ask Jeep, it’s the quickest SUV ever, thanks in part to a 707-horsepower engine it shares with the Hellcat. This helps catapult the SUV through the quarter-mile in 11.6 seconds.  To give you some perspective, that’s faster than a 2018 Chevy Corvette Grand Sport. It gives a whole new meaning to grocery getter.  Of course, you don’t have to get the best performance SUV when you buy a Grand Cherokee. The base model comes with less than 300 horsepower.

But this is the “go big or go home” section here. The category of best performance SUV has seen competition lately with the Porsche Cayenne Turbo S and the upcoming Lamborghini Urus. With a supercharged 6.2-liter Hemi V8, Brembo Brakes and race-inspired seating, the Trackhawk is still the best performance SUV on the market. And if 707 horsepower isn’t enough, take it to Hennessey to get some four-figure force. Prepare to shell out a few bucks for the high horsepower Trackhawk. The package starts at $86,995.