Imagine a beautiful place where the local government is so tight with their money, they daily drive 20 year old vehicles. 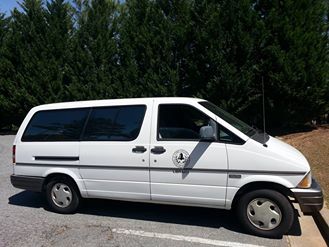 Not everything my local county does is hopelessly fucked up.

Okay, we did re-elect Newt Gingrich to the House of Representatives ten straight times, and the Atlanta Braves raped the locals out of tens of millions of dollars. Even with that involuntary contribution to a local monopoly, we still ended up with the worst team in the National League.

Our government, like yours, screws up a lot. From paying for evolution warning stickers to thousands of laptops that have become expensive doorjams for the local board of ed.

But if we do one thing right in the loony fringes of that is Cobb County, one thing at all, it's cars  preserving 21 year old Ford minivans with electronic 4WD steering.

This 1996 Ford Aerostar XLT  has only 67,833 miles on it.  What is a 4WD minivan doing in the heart of a southern suburbia where an inch of snow can instantly turn roads into a carpocalypse?

Let me explain that pretzel logic. Way back in 1996, Atlanta received a bumper crop of revenue before and during the 1996 Olympics. We're talking billions with a capital B, and absolutely no debt to speak of for all that building. Yes, we had the most commercialized Olympics in history. But unlike every other venue, we actually made a healthy profit while doing it.

That surplus? It went to the hometown heroes. One of which was Ford. Another was GM. They both had plants here in Atlanta. During the Olympics there were thousands of vehicles purchased for the exclusive purpose of delivering folks to and fro during the Olympics. Athletes, journalists, thousands of temporary workers, and pretty much anyone else who needed a ride.

My wife was one of those college grads from Georgia State who got a brand spanking new vehicle and a forty-dollar an hour paycheck. She would followed orders. Pick up NBC news people here. Athletes there. Then as the afternoon and Atlanta's already hellish gridlock wore on, she would get some City of Atlanta employees who were on their 15th hour of hooky for the week.

Once the Olympics were over, these cars and minivans spent years molderizing in indoor storage facilities and were invariably forgotten. The one you see here was quite literally found by a fish lady named Wanda. She had found it way out in the catacombs with just over 3,000 miles on it, and decided to put it to good use instead of letting it sell for $770 at Govdeals.

It's immaculate. Just like the one I got a few years ago from Georgia Tech for... that's right... $770.00. Thankfully this one will be making the rounds at the local libraries. While mine turned into a rolling $2500 profit that was sold to an elderly woman who refused to drive anything else.

By the way, if an Aerostar ain't your thing, we have a small army of Tauruses that have barely been driven for the last 15 years. Out here in Georgia we're still living like it's the 1990s when it comes to automotive government cheese.