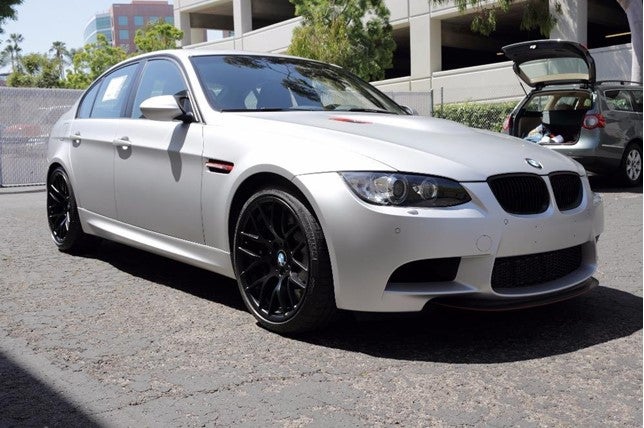 Rare BMW pricing can be a perplexing thing. If you don't believe me, just look up how much clean, unmolested E30 M3s are going for these days. To the most devoted (and deep-pocketed) Bimmer collectors and fans, the prices may very well be worth it—but to the rest of us, it remains a mental exercise in understanding the concept of 'relative value'. Is an ultra-limited run E90 M3 worth brand-new-Ferrari money? That's for you to decide for yourself, because that's exactly what we have here today.

Spotted on duPont Registry is this 2013 BMW M3 CRT going for a whopping $299,950. For those unfamiliar, the E90 M3 CRT—that's Carbon Racing Technology, not this—was a limited-run version of the previous-generation M3 that came with four doors and the engine from the coupe-only, hardcore GTS model. As its name suggests, carbon fiber reinforced plastic was used—a relatively new thing at the time—making the CRT 70 kilograms lighter than a similarly-equipped regular M3. However, I suspect the real value of this car lies not with its technical and performance gains, but with its exclusivity. Only 67 examples were ever produced—and according to the seller of the one above, only two are in the US.

From the seller: "1 of 67 in the world, 1 of 2 in the USA, 1 of 1 unregistered. A very special and rare modern BMW." (Boy, it better be.) "The M3 CRT was never sold in North America however this car has been federalized for Show & Display use, meaning it is fully legal to drive in 49 states (CA will require CARB certification) for up to 2,500 miles a year."

The M3 CRT came exclusively in this semi-gloss finish Frozen Polar Silver with red accents, making appearance maintenance that much more finicky. Shouldn't be a problem for the fanatical collector that eventually picks this up, though.