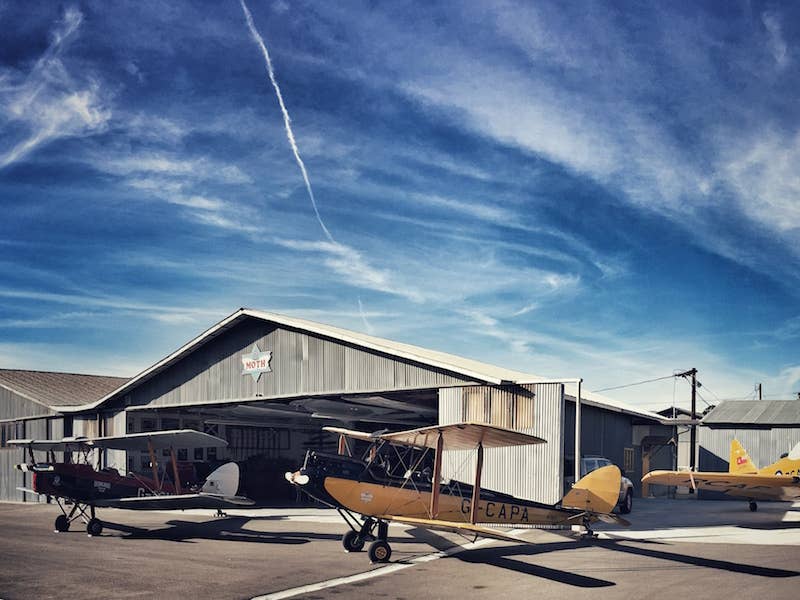 It’s a sleepy airport in a sleepy town. Santa Paula, California sits in a citrus lined valley and its airport sits on its outskirts, across the freeway, adjacent to a dusty river bottom and a sun-scorched golf course. The airport is so small it doesn’t rate a control tower, pilots work out landings and takeoffs themselves over the radio. It’s just a bunch of old hangars from the 1930’s, a reliable restaurant, and a collection of characters and machines to rival just about anywhere in the world.

Vintage Cadillacs might take second billing to biplanes at Santa Paula, but there’s no shortage of classics to oggle. Vintage American luxury cars, sports cars and classic motorcycles fill the space left under wingtips. It’s an Americana kind of airport, and an Americana kind of crowd. But there’s something for everybody, and a project for everyone. Pulled out onto the apron is a replica of a Howard air racer. A 200-knot beauty with a big Pratt & Whitney Wasp radial up front and high, clipped wings. Follow the whine of a sander and you’ll find a Supermarine Spitfire in parts, wings off, stretched out over the hangar floor. Another hangar has WWI-era engine parts in bins up and down the wall, and a de Havilland Moth parked out front. With the exception of the tools, it’s a scene that could have been plucked out of time.

The airport opens to the public the first Sunday of every month. It’s worth the trip. Besides the seemingly endless vintage hardware, there’s a flying school, and a handful of shops building experimental aircraft. Almost every inch of the airport is as fascinating as the next. Ascend one set of stairs and you’ll find an antique radio museum. Wander to the east end of the runway and you’ll learn Steve McQueen kept his favorite things here—old Stearman biplanes and Indian motorcycles. He camped out on the stoop of his hangar on the east end of the runway, enjoying the comings and goings of the airport from a beat-up old chair. Say what you will about the man, but McQueen knew what was cool, and the Santa Paula airport, then as now, is as cool as it comes.