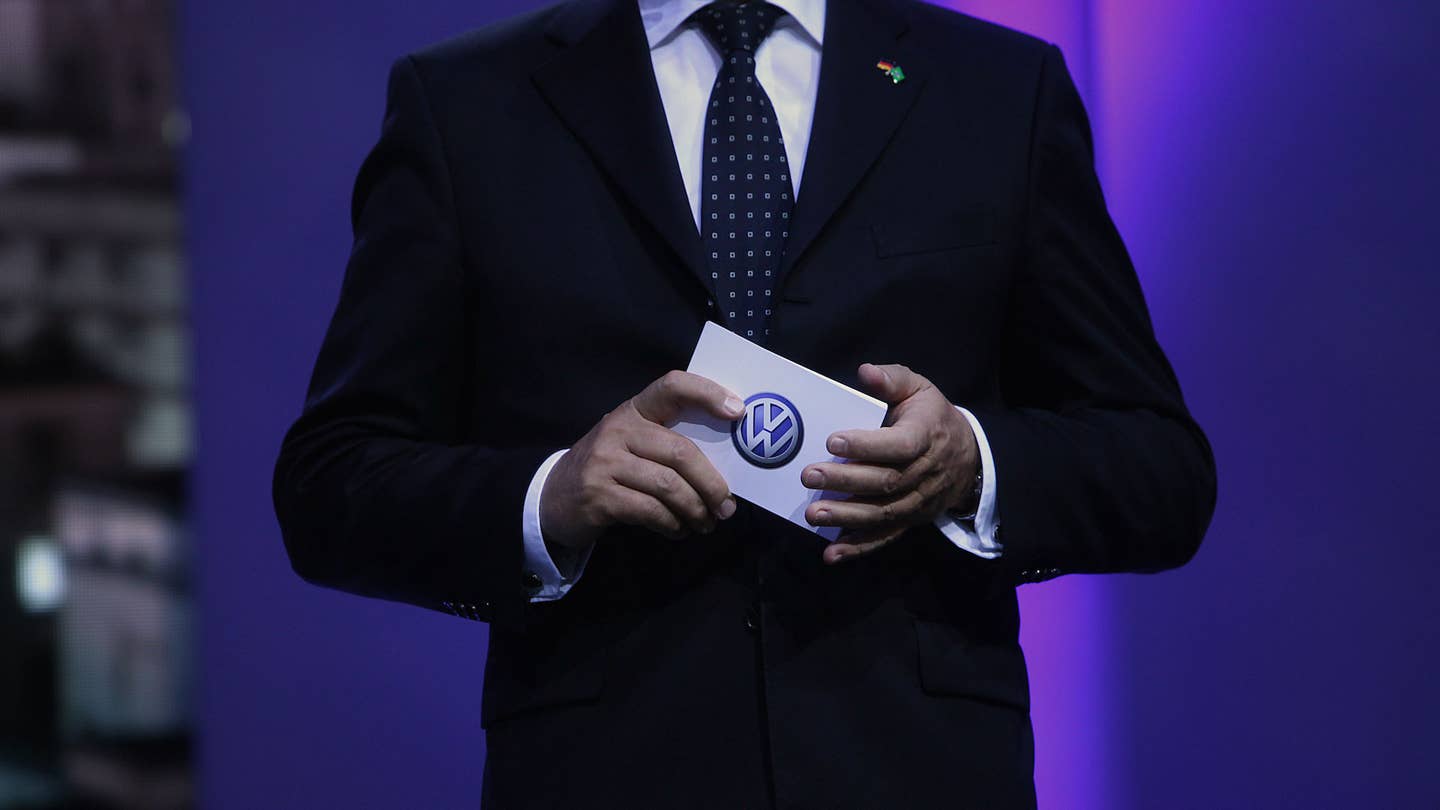 I was once invited to a wedding, and just days before the big event it became public knowledge that the groom had been caught cheating. Would it go ahead? Would there be denial and a putting on of brave face? Or would there be a public flogging, a full repentance after airing the shame and then, after some healing, an acknowledgment that ties were tested but proved too strong to break?

I was reminded of this achingly painful period in my friends' lives when I saw that Volkswagen had invited the great and the good of the American auto press to an event in Brooklyn to unveil the new Passat sedan, including the turbodiesel (TDI) variant, on September 21. The event was, awkwardly, right on the heels of one of the most embarrassing corporate apologies ever offered up regarding its long-adored TDI diesel engine.

Just hours before in both Wolfsburg, Germany, and Herndon, Virginia—the latter being the Volkswagen Group's corporate beach head in the U.S.—there were most certainly intense conversations (in German and English) about the Passat reveal event: A.) Cancel it, make no mention and focus solely on the reason for the event, just repeat the company line and say no more, or B.) Fully address the 240-lb-ft-of-torque gorilla in the room?

In the end, the decision was made to go full mea culpa.

“In my German words, we totally screwed up,” said Michael Horn, VW’s U.S. CEO, in his opening address to the crowd.

There. He said it. You could hear a sigh of what seemed like relief in the room, and he got a round of applause for his candor, honesty and authentic offer of apology, as well as the invitation to begin the process of making it right.

This is textbook good PR crisis management. It was brave and bold and immediately it helped VW (without using any cynical spin) to regain control of the news cycle, which it had been way behind in firefighting mode for days.

In my time as a PR guy for some big institutions and hallowed corporations I learned that when you hit a bump in the road, “Sorry” truly does seem to be the hardest word.

To paraphrase Rahm Emanuel, you never want to waste a good crisis.

Hours and days could, and would, be spent crafting careful words to obscure or confuse, much effort made in exercises of prestidigitation to divert the attention of the audience. A funeral of spin-doctors would be gathered. And despite their best attempts, even if the operation was deemed a great success, more often than not the patient died. I learnt a great lesson during that time on the front lines: When trust is broken, only truth can rebuild and mend.

“Our company was dishonest.” Michael Horn said, “This company will do everything it can to make things right.”

It took the wind right out the sails of many of the journalists present, whose boats had cannons blazing, ready to sink the good ship Volkswagen.

The past few days I have seen a slew of articles, blogs and op-eds describing the horror of this engine management software jiggery pokery. Of course the thing all PRs have to be aware of is that outrage is the reaction du jour, and that outrage and validity are somehow proportionately related.

I read many pieces yesterday describing how violated the writer now felt having once been on a press drive in a VW diesel. I doubt a date with Bill Cosby could have recovered more memories of deflowering.

The heat was on. And the trajectory for this story arc was heading directly towards the toppling of CEOs and galactically large fines. O.K., take a breath, a deep breath.

So what are some of things that should be being overheard in the corridors of power at Wolfsburg? Well here are some thoughts:

For a PR pro, context and perspective are useful tools to get hold of a story that has somehow run away from you. Having some of your more “friendly” contacts—the ones with an audience and influence—remind said group of the big picture can help minimize the terrier-like obsession some can develop. Sweating the small stuff into a communal sauna of negativity doesn’t help.

Realize that, at worst, this likely a software fix or mechanical addition. A hefty fine and lawsuit settlement will follow for sure. A senior level employee or embedded supplier may be thrown under the oncoming Westfalia. VW will be bruised, and may be bloodied, but not destroyed. Hundreds of people killed behind the wheel of your brand’s car to improve the bottom line of a penny-pinching corporation is a different scandal all together.

Nothing to see here, folks, but look over there.

My experience says that there is no group more convinced than the converted. There is an army of loyal diesel fans in America who love the benefits of torque and range, who hold their heads up high in green company and enjoy the social differentiation that comes with being an “oil burner.” From Berkeley lecturers to NPR reporters, these legions of dieselites—the vast majority of whom drive with genuine, clean-diesel, urea-additive engines under the hood—will not be swayed by some corporate foolishness. Marshal those troops and use social media, comment pages and word-of-mouth to balance the debate and grow the positive momentum.

Also in terms of being judged by the company you keep, I would encourage a conversation between all the manufacturers with skin in the diesel game—Mercedes, BMW, et al.—to double down. They should remind their customers and fans of the benefits and advantages that diesel brings, especially in the area of emissions and true clean fuel.

Of course, there are a lot of the VW customers that rightfully feel let down, hoodwinked and cheated by this not quite kosher programming "enhancement."

Let’s look at who has been really hurt by this. Customers, for sure. Honest and open dialogue with them will go a long way, as will recognition that they will incur no financial loss. Conversation and compensation is the key here.

The full environmental issues and effects are still to be determined, but addressing any concerns here, both early and fully, are vital for diesel to remain a responsible and sensible choice for the world we live in.

True diesel enthusiasts are bruised, and of course shareholders took some “nox” (sorry, too soon?) to their portfolios. Time will heal both, and it’s important that VW keep its nerve and not lose sight of the larger picture.

VW is a titan in the car industry. It has a solid and enduring reputation built over the course of a century. Yes, I know I graduated from the School of the Bleeding Obvious, but I only make the point to demonstrate that brand equity can take a few withdrawals from the "bank" and still leave a healthy balance. I’ve been amazed at how some of my former employers have stretched their brands to the breaking point, yet still had enough elasticity to quickly snap back into place (when shepherded correctly, of course).

It would be easy for a corporation with a European engineering-based culture to resort to an over-engineered solution that had a vague whiff of arrogance about it. Keeping it simple and true will serve VW well. I am happy to say that on the evidence of last night’s press reveal and Mr. Horn’s performance, they understand fully that a spoonful of sincerity will make the medicine go down a lot easier.

To paraphrase Rahm Emanuel: You never want to waste a good crisis. It can unexpectedly provide opportunities for what were previously opposing forces to come together and fight for a common cause. If that means OEMs combining effort to push diesel to a market grown suspicious, so be it. If it forces fighting factions within a company together to redress a loss of direction and lack of focus, then bravo. For VW, this too shall pass. But it would be a pity, now that it has the attention of everyone in the company—and the world—to not become a better corporate citizen.

I am sure it was not lost on the audience last night that having witnessed a remarkable display of corporate honesty, the evening ended by VW bringing out Lenny Kravitz to remind us all, “Baby, it ain't over till it’s over.”

Geoff Day has been called everything from a "media pied piper” to “Royal corgi walker” and has been credited with reinventing the image of a number of luxury brands. He currently advises a varied client roster on reputation and brand management. Previously he served as director of communications for Mercedes-Benz USA, DaimlerChrysler in the UK, and the country of Scotland.