When you hear the folks who built the Unlimited-class Enviate Pikes Peak car are building a Civic, you know it's going to be good. 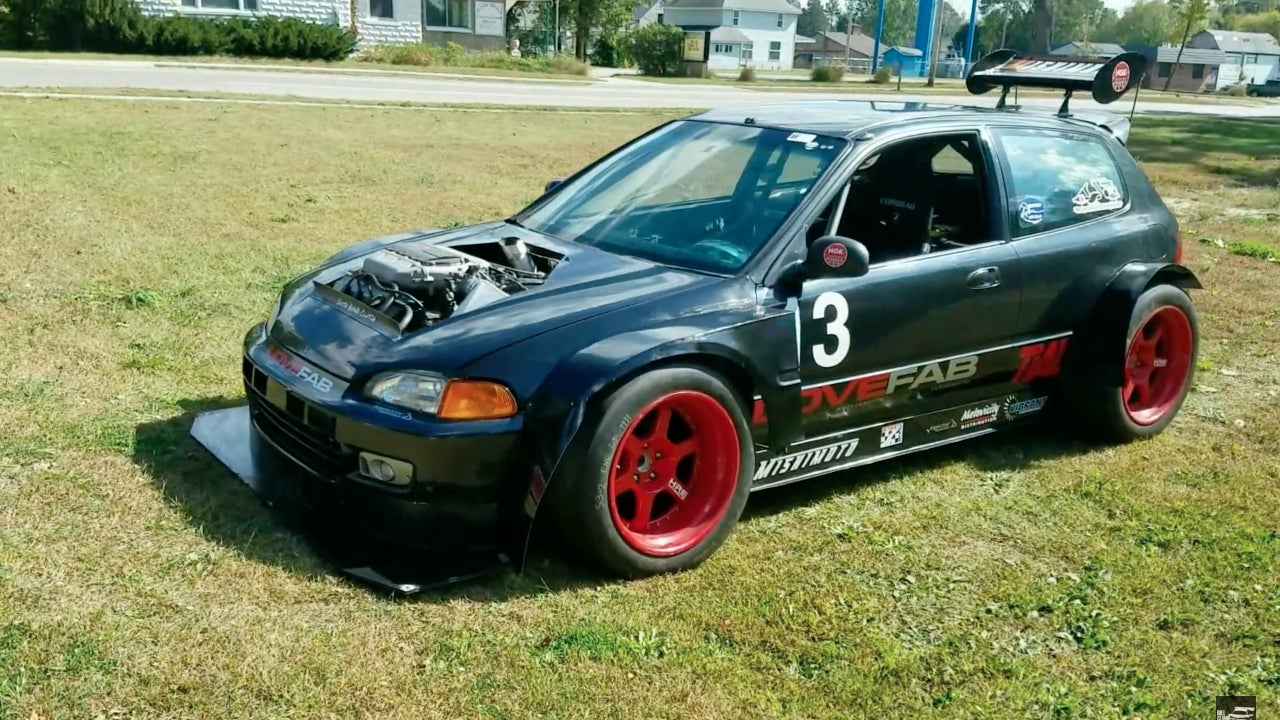 Modified Honda Civics are a dime a dozen on the world's roads and racetracks, but some owners take things further than others. Thursday, YouTube channel HillClimb Monsters uploaded a video of an EG (fifth generation) Honda Civic hatchback, christened "Beastie," that has been upgraded close to the point of being unrecognizable as a Honda, with aspirations of time attack in the car's future. It was built by the owner of LoveFab, an Acura NSX performance specialist shop, which has also dabbled in entering the Pikes Peak International Hill Climb. Though their 2013 entry ended in a fiery crash, they returned in 2017, having built the Enviate Hypercar, which finished second in the Unlimited class.

With a competitive finish at the world's most extreme hill climb under their belt, we have no reason to doubt that this shop is capable of making one hell of a time attack car, and the parts going into the build suggest that they're as serious about this car as they were about the Enviate.

We reached out to LoveFab regarding their intentions for the car, and Cody Loveland, for whom the shop is named, responded with a plethora of information.

The car's heart is a 3.2 liter J32A2 V6 from an early 2000's Acura, and it bursts out of a hole cut in the Civic's cut hood, a la Aliens. It was swapped in and turbocharged back in 2013, padding its power output from 260 from the factory to 377 wheel horsepower on 9 PSI and pump gas. With a simple build, Loveland says it is capable of making over 600 horsepower, and over 1000 with a more extensive build and a stronger transmission.

Beastie runs on 335 tires on all four corners, some of which are leftover from the Enviate program, and the wheels are from an NSX entered in Pikes Peak by the team in 2012, which placed second in Unlimited with Cody at the helm.

The car's performance at the Empire Hillclimb—second in class, fifth overall—is not at all representative of the car's capabilities, as there was no time to give the car any suspension or aero setup attention, and the driver may have been running a 102º fever.

Speaking of aero, here's where things get crazy. To match the car's outrageous 67/33 weight distribution, a full underbody and a 2500mm front wing are planned to keep those front wheels stuck to the road at any speed, and a mockup of the front wing has already been completed.

As for what Beastie is built to do, LoveFab already has some short term and stretch goals in mind. National time attack events are the target, with the World Time Attack Challenge and a Pikes Peak appearance of interest to the team. A shakedown with the car's new aero package will occur on track at this year's final Gridlife event at Gingerman Raceway in Michigan.

If everything goes well, LoveFab may shoot for a serious title with their little Civic: the fastest FWD time attack car on the planet. "Given our experience with high HP, high aero vehicles," said Loveland to The Drive, "I think we have a shot at building a contender for the fastest FWD Time Attack vehicle."

And you know what? We don't doubt them at all. We expect them to have the opportunity to prove that theory some day at WTAC. Godspeed, gentlemen.